Big Red Bash 2023: A unique outback celebration of Australia in the Simpson Desert This is the bash where you can find Australia’s most iconic musicians in the desert while thousands of others flock to camp under the stars to hear them. With the country’s most popular acts on the bill, past artists include John […]

Big Red Bash 2023: A unique outback celebration of Australia in the Simpson Desert

This is the bash where you can find Australia’s most iconic musicians in the desert while thousands of others flock to camp under the stars to hear them. With the country’s most popular acts on the bill, past artists include John Farnham, Midnight Oil, Kasey Chambers, Hoodo Gurus, Missy Higgins, Jessica Mauboy, The Black Sorrows, Kate Ceberano, Busby Marou and Jon Stevens, the remote location being a drawcard for all.

This isolated location has traditionally been a meeting spot on the edge of the Simpson Desert for people to congregate and the festival brings that spirit to its proceedings, it’s even a dog-friendly event! Not to mention family-friendly, this event is completely “everybody friendly”, all nationalities and backgrounds are welcome to meld together in peaceful, dusty harmony!

Becoming “Priscilla Queen of the Desert” has never been easier, with the Bashville Drag Races competition which raises funds for the Royal Flying Doctor Services,  t’s open to both men and women in the spirit of fun and goodwill.

There are also scenic flights over the festival in a four-seat Robinson R44, and will it take 3 passengers at a time from sunrise to sunset every day, providing a unique perspective of the desert and of the entire festival.

‘Birdsville’s Big Red Bash brings people together for the world’s most remote concert.’ 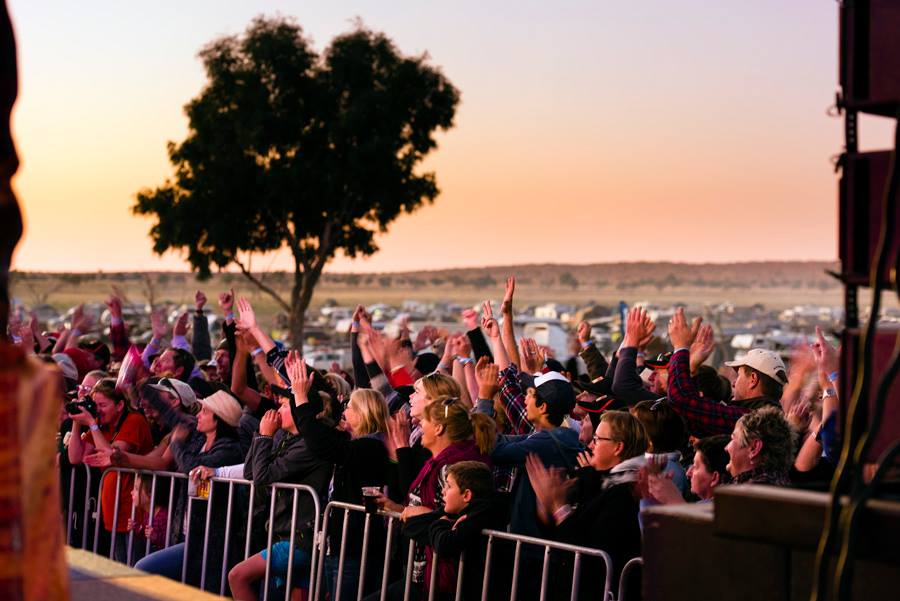 Your experience at Big Red Bash

The most special part about arriving in Birdville after the road trip is taking in the breathtaking desert location. The concert and stage is set in a red dusty bowl-shaped crater, what was thought to dry inland sea bed. It’s also home to what the locals call “Big Red”, which is the tallest sand dune in the Simpson Desert. It’s one to go home and tell the relatives about for sure.

People from all walks of life, from the oldies to the toddlers, locals to the backpackers, will surround you. All of them sitting together underneath a vast canopy of stars from the southern hemisphere as world-class muso’s entertain on the big stage from across three magical nights.

There is just as much fun to be had earlier during the day as epic food and refreshments are served up.  Competitions and games are held across the site and people do daft things like getting married. If bored, find a wedding party to join. It’s really that random, anything can happen in the desert.

There’s a freedom about being in the middle of nowhere, so it’s great that kids are playing freely and dogs wandering with their families as well as groups of friends spending time with one another. There are so many people from anywhere and everywhere, but all united to have a great time at the bash.

Stay tuned for the Bash’s 2022 artists to be announced soon..

Well, a climb up ‘Big Red’ will get you the best view of the entire campsite and stage, but you will be quite far away from the action. It’s a great activity for during the day no less.

Front of the stage is where you want to be for the music, so getting in right when the gates open is the trick. You may have to line up a little early if you’re set on nabbing a spot in the front row.

The earlier you book the campsite however, the closer you will be to the action. You don’t want a long trek back to bed. 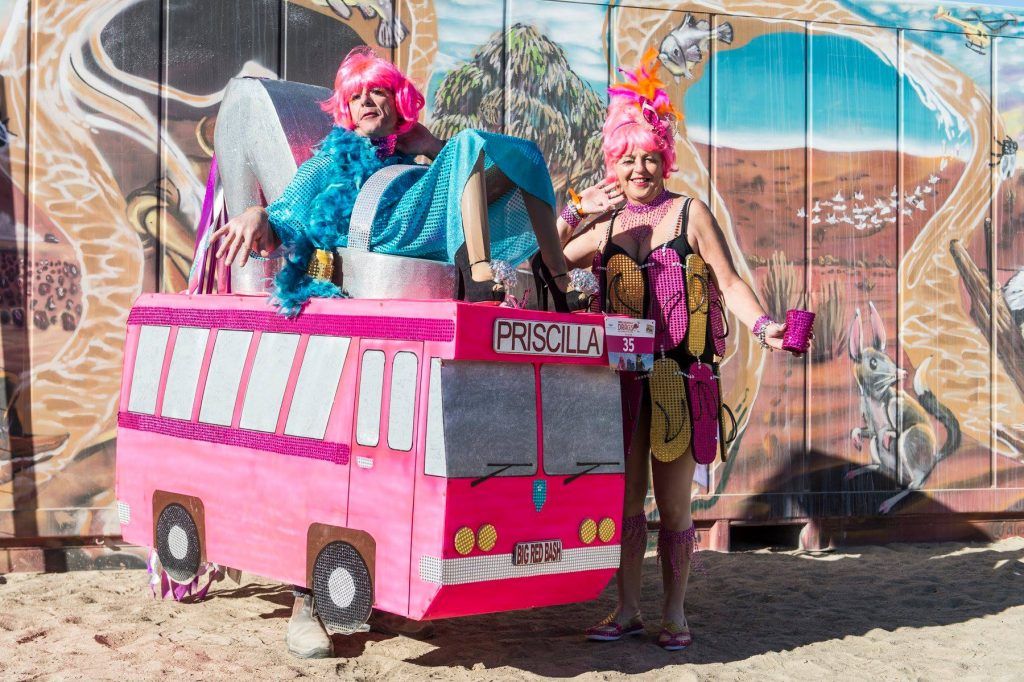 Light breathable clothes for those hot desert days. Warm jackets and sweaters for the cold nights, even a pair of jeans can go in the backpack. It’s dusty, so bring a few changes of everything.

Beanie and gloves – it gets down to 6 degrees celsius at night
Light summer clothes – it’s 21-30 degrees celsius during the day
Tent or RV camper – waterproof means dustproof!
Sun shelter for hot days
Lighting: Torches and batteries
Compact tables and chairs to carry
An extra tarp
Drag costume, boogie board and best Indiana Jones kit you own!

Word of the Big Red Bash is getting around and tickets sell out fast these days.

Tickets give the holder access to the concerts for the full three days and nights of music. The tickets also include camping for four nights, Tuesday to Friday of that event week.  You can book either an early access pass for camping on Monday night or an early exit pass, if you would like to pack up and leave earlier. Yes, you are penalised for leaving early, but the $15 fee is a fundraiser for the Royal Flying Doctors Service.

There are tickets available for adults, 11-17 year old children and family tickets. Children under 11 years old get free entry, but you will still have to book a free ticket for them. All ticket and pricing information is available on their official website. 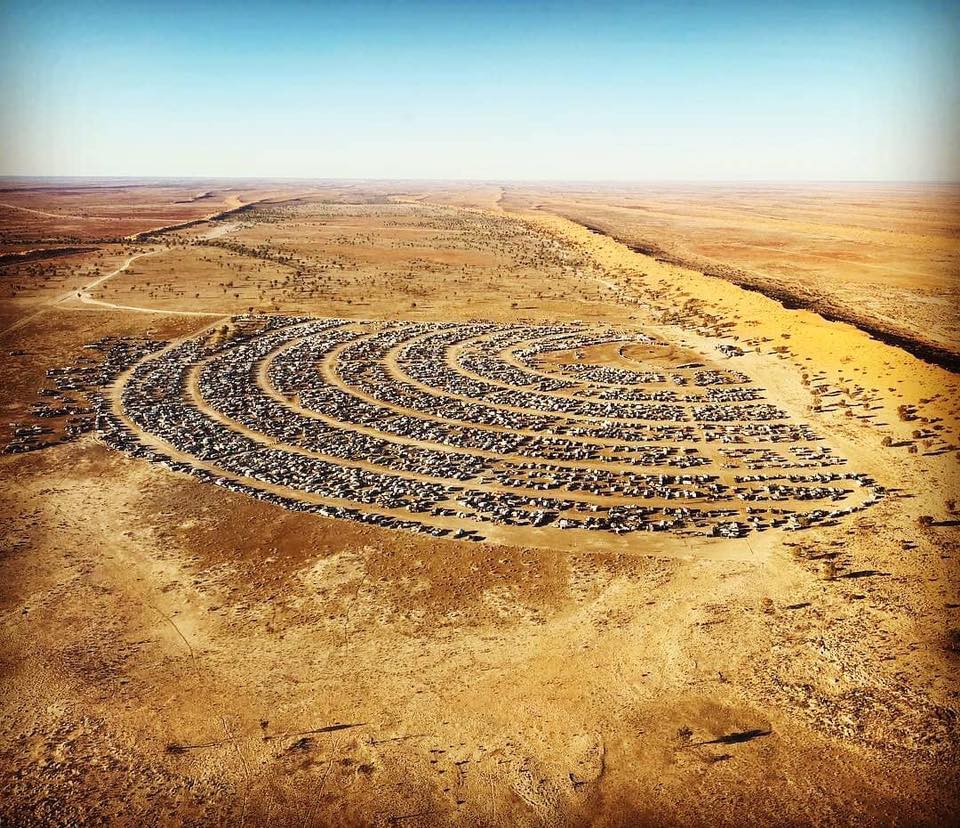 Monday night sees the kick off for the early arrivers to the festival, featuring “The Big Red Bash Band” playing on the main stage from 7 pm.  The band plays classic rock tunes, classic tunes and boot-scooting favourites. It’s sure to get everyone flared up for the three days ahead.

All acts make their way to the stage from 1.15 pm to 8.15 pm every day for the Tuesday, Wednesday and Thursday event. Gates to the concert area open one hour prior to the start of the performances.

The reason the concert is held during these times is that the desert gets quite cold at night, so there is ample time for all concert goers to get back to their campfires for the night, before snuggling into their tents. Warming up is a must once the sun disappears.

Don’t pack a mesh tent: Avoid bringing a mesh tent, the red sand will just pass through the lining into your sleeping bag and you will wake up with a red face. You’re welcome.

Take a decent tent: Bring strong tent pegs, it can get windy at times.

Bring plenty of water: There is no drinking water available at the bash, so bring as much as you need. Its recommended that 3 litres a day per person would be required.

The Big Red Bash has been a musical desert playground since its first festival was launched in 2013. It is said that the event was born after one of Australia’s premier folk singers, John Williamson, performed on top of “Big Red”, inspiring the event that is run today.

Since then it has been growing steadily in popularity, drawing people from both Australia and the rest of the world. It only showcases the best Australian performers, so it’s a unique concert experience that can not be seen anywhere else.

Europeans settled in the area around 1844, driving in cattle across the South Australian border, which is only 12 km away. It became a customs point because it was so close to the border, established for stock and supplies. After 1901 the population began to decrease when the custom points were no longer charging tolls.  It has become better known for tourism over the years, as the beginning of the iconic “Birdsville Track” route.

The area has been a traditional meeting place of the aboriginal people for thousands of years and the organisers strive for its ethos to be welcoming and inviting. They also respect that people are camping on an organic cattle farm and try to keep the festival as eco friendly and sustainable as possible. There is no other camping permitted in the area. 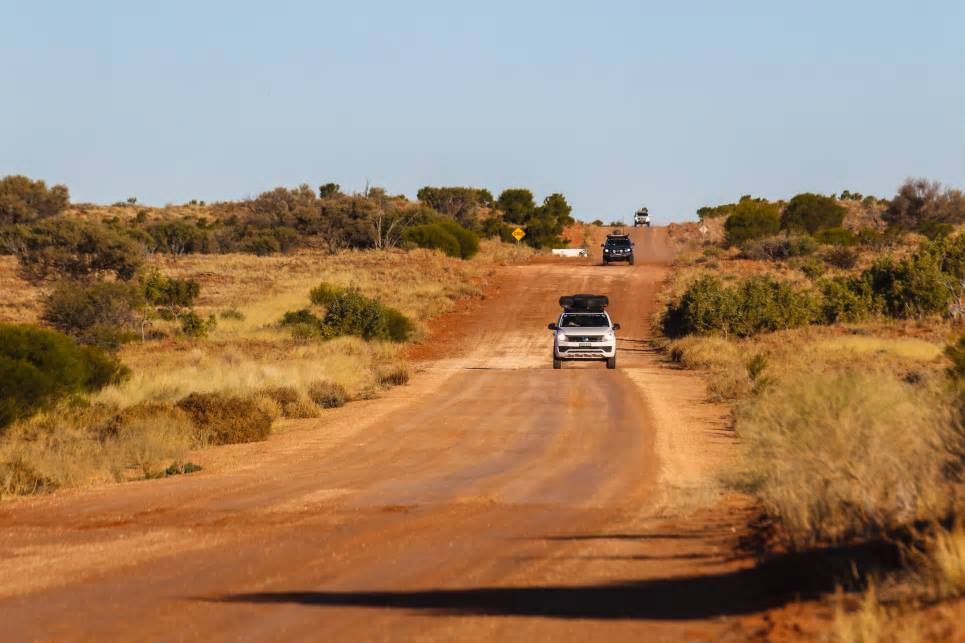 Things to do in the Simpson Desert

As it is a keen tourist destination there are quite a few things to do in the desert. Visit the Birdsville Outback Pub to enjoy a quintessential Aussie beer, the best food around and get an eyeful of the amazing pub memorabilia showcased.

Swim in the Birdsville Billabong, which is ideal for birdwatching and fishing for yabbys (Aussie cray) or just for a nice cool dip. An added bonus is you can tell your friends you swam in a real Billabong!

The Wirrarri Visitor Centre tells the history of early settlement in Australia and the culture of aboriginal tribes in the Simpson Desert area. It provides information and local guides for special walking trips to cultural landmarks.

What to eat in Birdsville and at the festival

There is plenty of food on offer with coffee, pizza, burgers and curries as well as some interesting menu items such as smoked meat rolls.  You can pick up the local delicacy camel pies from the Birdsville Bakery on your way in and out of the desert.

Many of the catering food vendors cater for gluten free and there are vegan options as well, so everyone is included.

The Festival is held in Birdsville, a small remote outback town of just around 140 people. The area marks the start or finish of the tourist “Birdsville Track”, beside the Diamantina River, the town sits between the sands of the Simpson Desert and the gibbers (large rocks) of Sturts Stony Desert.

It’s situated in South-West Queensland, 12 km from the South Australian border in the heart of Australia’s red centre.

There is a designated camping zone called “Bashville,” which is located on the cattle station “Adria Downs” where the festival is held. Group and individual camping and hot showers are available, which is handy as it can get pretty dusty.

There is also caravan park accommodation close by as well as limited Hotel/Motel options. This is not the kind of area where you can look for 5 star luxury accommodation, but there are upmarket glamping travel packages available.

Well, when headed to a remote part of Australia, please note, it is not a leisurely drive from any major city!  However, there are many ways to get there. You can drive a hire car or hire a 4WD, it could be up to a 2 day travel from Sydney or Brisbane.

If driving there isn’t your thing, then you can hop on the Bus Tour for the bash named “Big Red Bash Rock’n Roll Road Trip,” hosted by Kangaroo Buslines. The tour includes tent camping and hot showers. You can fly in and out to Birdsville Airstrip via REX Regional Express Airlines.

Do you like music and Australia? Read more about the Bluesfest in Byron Bay and the Parkes Elvis Festival in New South Wales.

Stay safe: Even the best-laid plans can head south. SafetyWing travel medical insurance can help you stay safe and cover you in unlikely situations as well as that epic road trip or on your next adventure. How to stay safe during Big Red Bash 2023? If you’re not covered for your trip yet, get your quote here.

Rad Season is providing you with rentals and hotels at the lowest prices available online. Book your stay for Big Red Bash 2023 using the map below!

Sign up for more news about Big Red Bash 2023