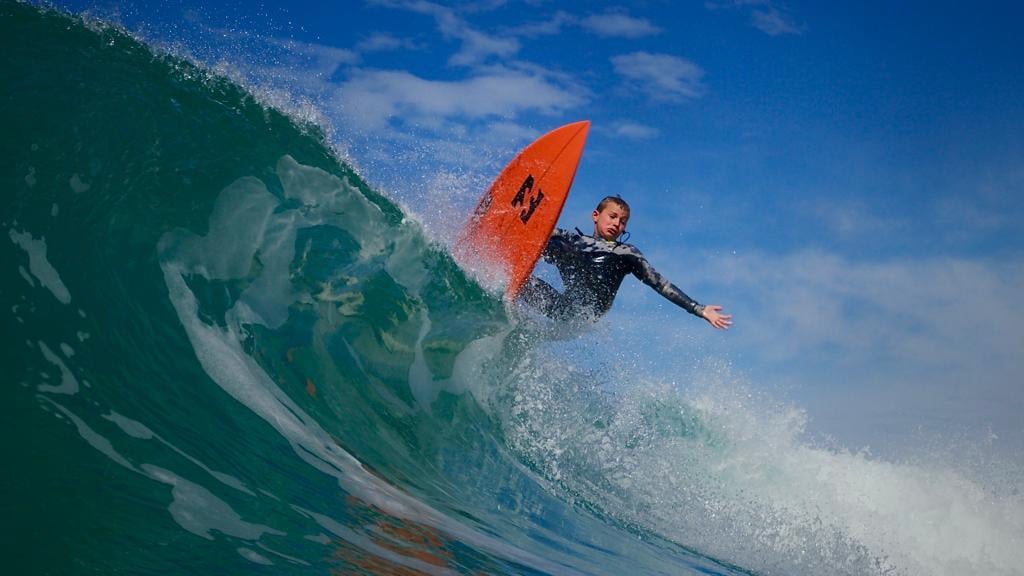 Natural talent or hard work, what makes a champion?

Eleven year old Locana Cullen is Australia’s top ranked surfer (under 12 division) and said to be top 5 groms his age in the world. Winning every national, state, regional and ‘Grom Search’ competition in 2022, he turns heads everywhere he goes.

What is the magic sauce to create a surfing sensation this young?

Is it parents pushing, world class coaching or an individual with a gift?

The answer lies somewhere in the middle. Locana’s parents, Nic and Bec credit ‘Loci’ for driving much of his own success, despite excellent parental management to get him out of bed every morning and in the water. “Locana’s pretty motivated, he’s never fazed by the conditions, if it’s surfable he surfs it”, Nic says. “He wants to be the best and doesn’t like losing at anything but he never gloats, there’s not a bone of arrogance in his body”.

Do you need to possess passion? Or can raw talent get you there?

Surf coach Matt Cattle finds Loci incredibly passionate, “in his age group he’s one of the best in the world and to get there he surfs up to 6 hours a day”. Matt attributes Locana’s success in the water to the work he puts in every evening at the skatepark, a sport close to Locana and brother Balin’s hearts. “Every wave Locana surfs is recreating what he does on his skateboard”, a sentiment echoed by one of Locana’s sponsors, Luke Howarth from Howie Surfboards.

“I saw Locana when he was about 4 or 5 years old at the local skatepark and I didn’t know their family back then. He was wrapped head to toe in skatepads and was rolling down the biggest halfpipe in the skatepark, I couldn’t believe how courageous he was for a little guy”. 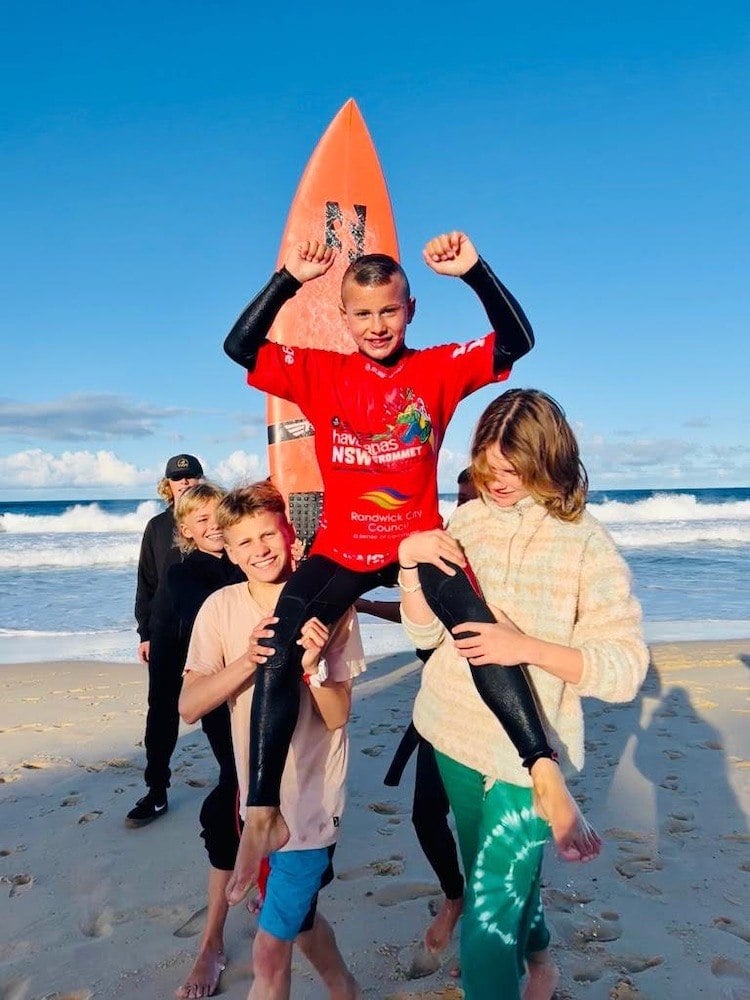 Will excellent coaching get you there?

Coaching is an important part but “a coach will only show you what you should be doing but you have to apply it, it’s time in the water and self motivation that get you the wins”. Bec and Nic take the boys to surf coaching just once a twice a month, tag teaming between them who will drive the boys to training, to the beach or the skatepark.

Former World Champion surfer, Tom Carroll coaches groms in surf sessions and has seen a lot of talent come and go, “Locana oozes talent and that’s something you can’t teach or can’t deny him. I watch his passion really infect the kids around him, which is pretty epic to watch”.

Is it pushing from the parents?

There’s no doubt management on the part of the parents is a huge contributor to ‘time on the water. So much so that Bec, a nutritionist by trade with a Bachelor of Health Science and Advanced Diplomas in Naturopathy pulled both Locana and Balin out of the mainstream school system to oversee their education herself. They are extremely responsive to her fairly strict approach to the school day and soak up every aspect of education they receive. “They would read for 5 hours a day if I let them, they also have booklets to do that focus on aspects of English language, grammar, components of writing, science and maths.

If I’m not happy with what they write they have to write it again so they’re getting neater”. Both sons have tutors for musical instruments and play the piano, drums, beatbox, Didgeridoo and Djembe. Bec expects them to play every single day, even if it’s just for ten minutes. “We integrate learning into everything we do. If we’re at the petrol station they work out the change we get after paying, we make maths out of every single situation, whether it’s cooking, travelling or gardening.

Health is a massive focus and has everything to do with our sleep, mental state and food and the kids learn all of it. We talk about everything, including our feelings and the flow on effect our feelings have on every aspect of our daily life”. 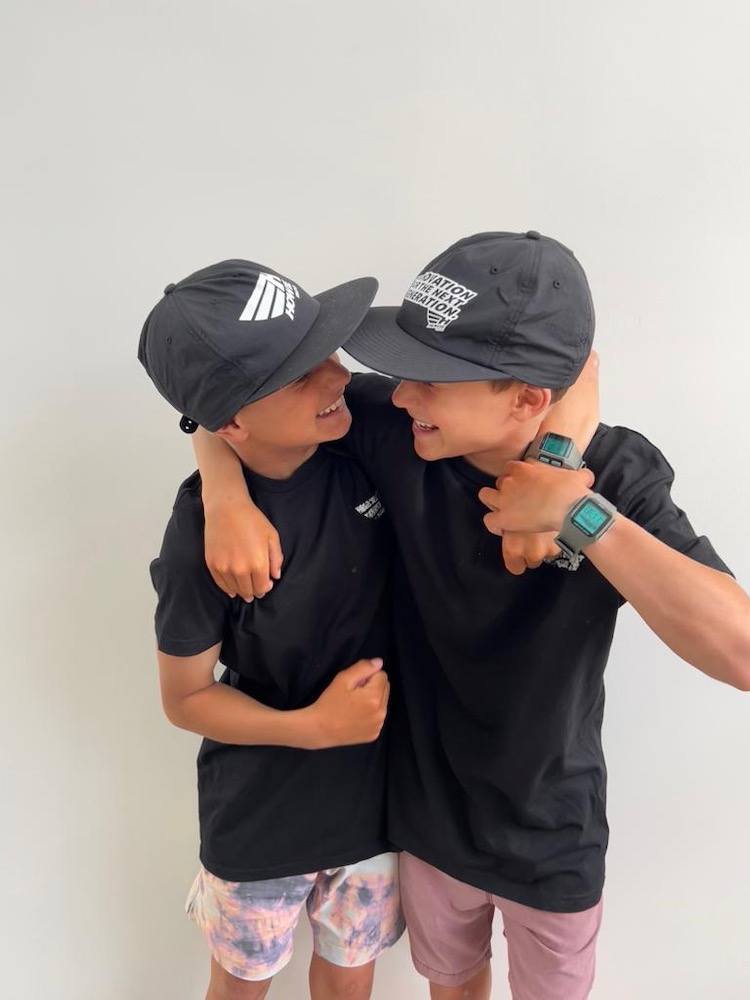 Do the kids’ appreciate the blood, sweat and tears of the parents?

Locana completely understands the role his parents play “they wake me up at 5am or 6am on a normal day, they pay for my training , support me in my surf comps and feed me really bad food! I think it’s bad because it’s good, healthy food. The worst is the zuccini and pumpkin”.

How much of a role does nutrition play?

On the menu is organic porrige, salad or homemade bacon and egg rolls for lunch, dinner is meat, vegetables and salad. Bec is well known in the local community for super-healthy cooking and her incredible food knowledge. She has involved her kids in meal prep since their preschool days and loves watching them whip up omlettes, smoothies, avocado on toast or boil eggs for snacks. Muscle cramps in her home is an opportunity for kids to learn about which foods deliver higher magnesium to sore muscles (spoiler alert: cacao) and white spots on kids’ fingernails gets them busy making bliss balls with pumpkin seeds.

Home schooling is not for everyone, but it works for this family dynamic. She carefully observes their socialisation with kids their age and is firm on manners, watching the kids thank me for my time as I leave their home after our chat. “They’re naturally very social so I haven’t got to a point where I worry, the boys know lots of kids in every town we stay in for surf comps. They’re with kids when they surf and they’re at the skatepark most nights with a huge crew of kids and their parents”.

Do they need in-depth surf knowledge?

Howie is pretty blown away by Locana’s understanding of the waves, feet positioning on the surfboard board and his thrill-seeking on a board, “those things are not like most kids at the same age, he’s way beyond his years. He’s so focused during his heats and has a great sense of how to control all the elements within that heat”.

Loci says he knows whether each wave will offer him potential to do a big air, a barrel or a turn before he’s even standing on his board. “By the time I pop up I realise what the wave has to offer, I know if it’s going to close out or if it’s going to shoulder, if there’s a section coming towards me I can see if it’s a good air section, for that it has to be sucky. If it’s a barrel section it’s going to be very sucky and curl over me”. He changes his feet positioning during this decision making process, “if you want to do an air rev I have to put my front foot up further and if I want to do a nose pick air I push my foot further up the board and make the board spin around”.

Brother Balin is 19 months older and while their parents keep an eye on any difficult feelings that may arise from a younger brother winning every competition, the entire family understands (through hours of talking out their feelings ) that Loci wants ‘the win more’ and is prepared to put in more work. Balin says “I want to be a professional surfer too but until recently I wasn’t working as hard. Loci used to stay out twice as long as me so he got more used to the ocean and the waves but I’ve started to stay out longer and now I’m seeing results. I’ve made finals and a couple of semis so I’m getting there. I need to get better in my mind, I seem to crumble in the finals”.

When he’s not in the water or the skatepark, Locana watches youtube clips of surfers and practices holding his breath under water in the bath, to combat the natural panic that arises should a wave hold him underwater during a heat. For the most part, for someone with that much talent Locana is still a little kid who loves rumbling with his siblings and adores mum.

“I like being in the water, I like standing up on my surfboard, I like putting my stickers on my board, I like everything”, Loci says. But his biggest dream is surfing the World cup circuit “I want to be a professional surfer and I’m going to practice every single day and visualise it every night when I close my eyes and think about me doing my favourite tricks on my board. “Locana has a lot in front of him, it’s pretty exciting”, Tom Carroll says.

Not bad for a little fella.

Rad Season is providing you with rentals and hotels at the lowest prices available online. Book your stay near Avalon, Australia using the map below! 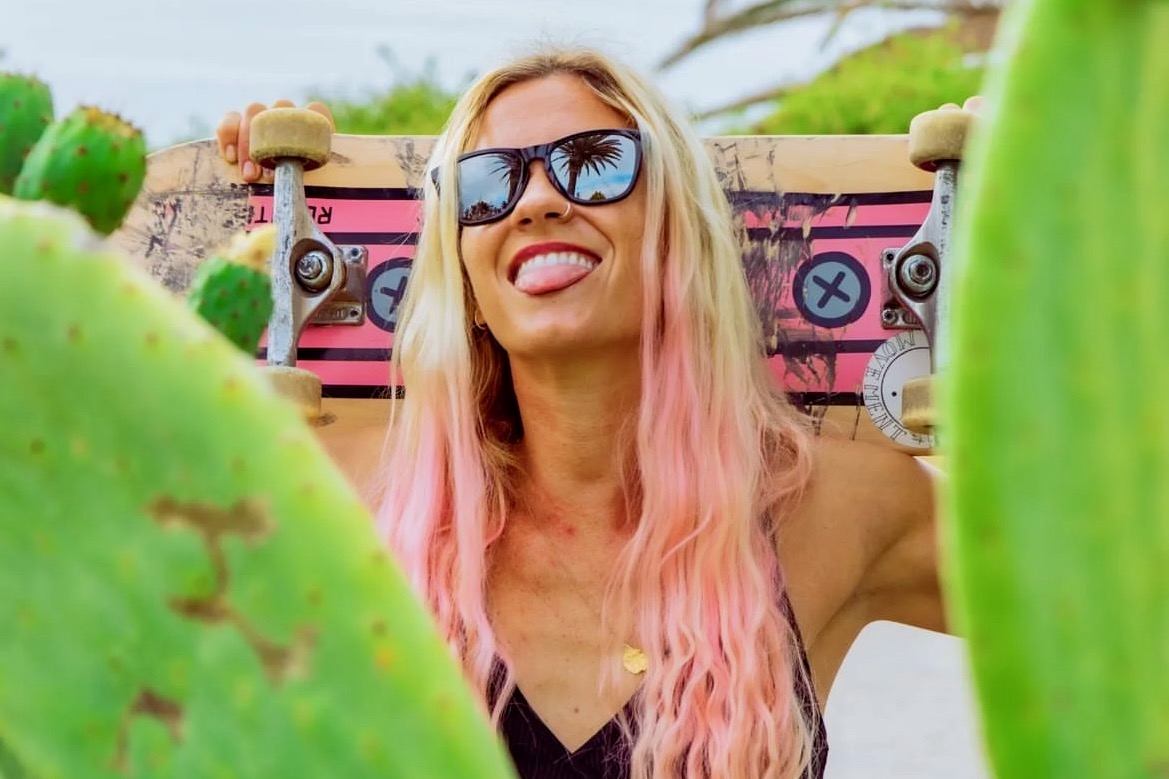 Emma Wilson is a content creator and copywriter based in Sydney, Australia. With a background of Austrian ski instructor training (Anweiter) and Canadian ASTL1 Avalanche certification, Emma co-hosts podcast ‘Loving the Snowlife ‘ with Tennille Southcombe. Canadian certified race coach, adaptive snowsports and CSIA level 4 instructor, Tennille & Emma’s podcast helps families get ready for their next snow trip as well as entertains and informs with great guests.