Rome Marathon 2023: Commitment and dedication reign at the Maratona di Roma The Rome Marathon is the largest marathon in Italy. Every year it attracts more than 15,000 of local and foreign runners.  Another 50,000 people participate in the 5km Roma Fun Run race. The Rome Marathon gives you the opportunity to explore the beautiful […]

Rentals and Hotels Book Room
Experiences Book Now
Insurance Get a Quote
Last updated on May 10, 2022
Sign up for more news about Rome Marathon 2023

The Rome Marathon is the largest marathon in Italy. Every year it attracts more than 15,000 of local and foreign runners.  Another 50,000 people participate in the 5km Roma Fun Run race. The Rome Marathon gives you the opportunity to explore the beautiful attractions of Italy’s Capital with its robust culture and history.

Running in the Rome Marathon you will witness an array of historical buildings. The Marathon kicks off at on the Via dei Fori Imperiali in the shadow of the Colosseum, proceeding through the old city’s narrow streets, passing the most famous landmarks of the city such as the Trevi Fountain,  St. Peters Square, The Piazza di Spagna, and the Piazza Venezia.

Rome is the ‘City of Seven Hills’ but the marathon race is usually very flat. You can run comfortably and once you make it to the end, a huge crowd will greet you.

“Rome Marathon leaves other races behind in the dust as entrants literally dart through the Vatican City.” 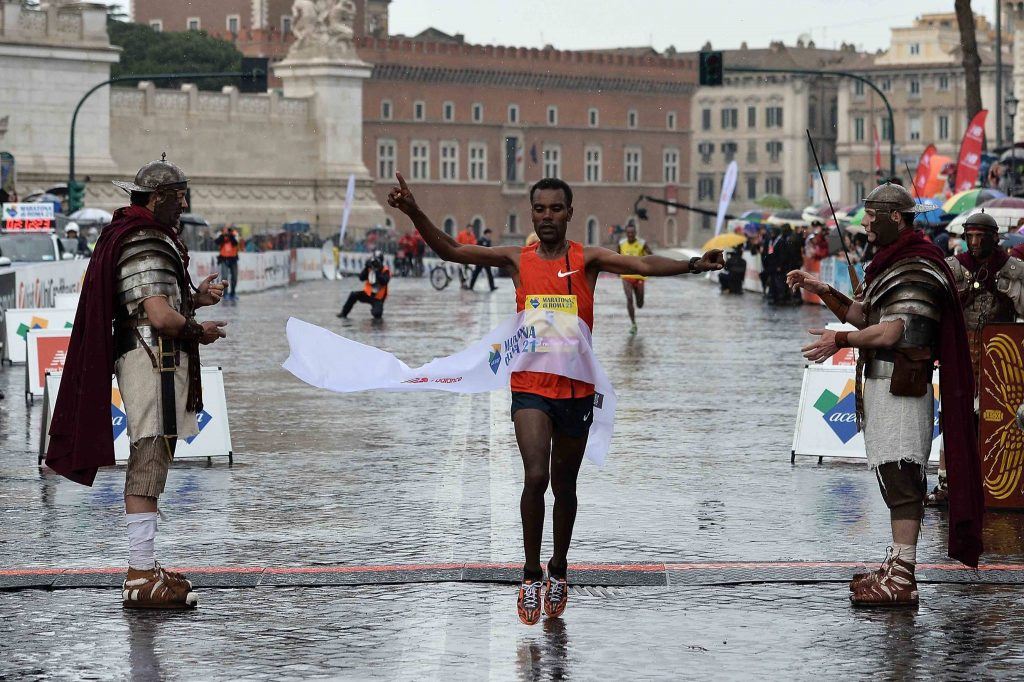 Your experience at the Rome Marathon

As a runner you will take off with anticipation, with the Colosseum as the backdrop. With so many iconic sights to behold you will be looking forward to the next scenic building, museum or ancient landmark and it will spur you on to finish the 45,195m race.

For the first 10 miles there is a congestion of runners to compete with. It’s to be expected and everyone is in great spirits running together. Cobblestones can be a challenge for some, but it adds to the authentic ancient experience of running through the streets of Rome.

Refreshing food and fruit, like blood oranges, greet you at the food and water stations. Try one Italian blood orange and you will be hooked on their juicy sweetness. It’s hard to stick to gu’s when you see these waiting for you. Wet sponges are available too if you are quick.

One of the most scenic parts of the race must be the run up to St Peter’s Square, bells ringing, runners look down the street at the obelisk shape of the Basilica that is now prominent in their centre view.

Groups of participants run through many tunnels and underpasses and cheer, blow kisses, whoop and holler as they do so. Everyone in the crowd joins in.

Welcome the changes of scenery you head out of the main city for a while. Approaching the 20 mile mark you can see streets lined with trees and houses. There is still some suburbia left in Rome’s grand city. More cobblestones challenge you after mile 20 and you pass some of the tourist sights like the Spanish Steps before they are greeted by the roman guard at the finish line.

Could you ever forget running right through the Vatican? Every participant will tell you it’s their favourite and most surreal part of the marathon.

Best views of the Rome Marathon

The Rome Marathon route starts at on the Via dei Fori Imperiali in the shadow of the Colosseum. This destination marathon gives you great views, whether you are running it or a spectator. Runners say that with every turn they can see a landmark, and it takes their breath away.

Spectators can watch from many points along the track, and it’s particularly congested around the major landmarks, as well as the starting line. There are next to no spectators as the track goes out of the main city for a stretch, but then everyone is back to greet the runners at the finish line. 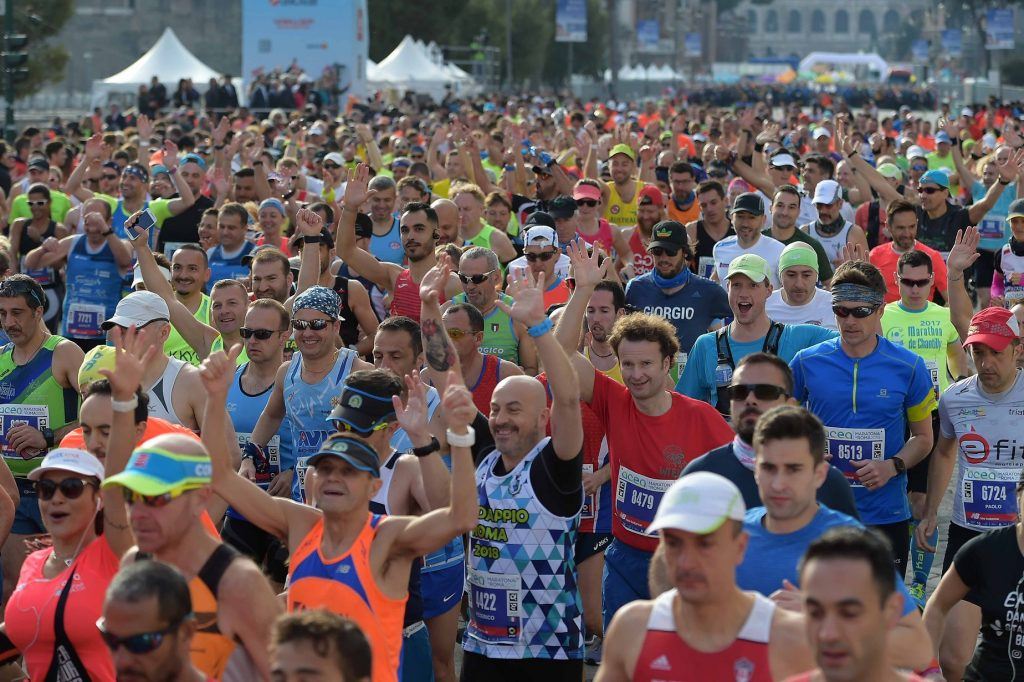 Rome is a religious city and it has some unwritten rules about clothes, even today in this modern world. Men must wear trousers, covering the legs and women must wear reasonable length skirts or trousers and cover their shoulders, wearing sleeved t-shirts.

These rules apply when entering all buildings in the ancient city of religious significance. Wearing jeans to the Vatican is frowned upon, but not a steadfast rule. Trousers or long skirts are preferred.

When the Rome Marathon is held, it can be warm during the day, but cool at night. Bring sturdy walking shoes for the cobblestones, warm cardigans and sweaters for the chilly nights, sunscreen and hat and a light jacket for impromptu rain showers.

Marathon entry tickets range in price from € 55.00 – € 95.00 for individual registration in the main race. These are released in stages, so the earlier you register, the cheaper it will be. Registered athletes will receive a stylish commemorative medal for finishing.

Ticket prices for each stage are slightly reduced if you are over 75 years of age, groups of ten booking together will receive one free ticket. Special deals for tour operators exist.

The Rome Marathon starts on Sunday, March 19, 2023 and there are two races that can be entered this year. The all-important one for serious athletes and two other events designed around inclusion and perhaps family fun.

The fun race, the City Run of Rome takes place before the official marathon. Anyone can achieve this and enter the race, whether you are 0 or 99 years old! Non-competitive and open to anyone, walk or run the 45km and take in the sites at your leisure.

No medical certificate required for this one. Up to 80,000 people have taken part in this race in previous years.

Run Rome the Marathon. The serious race begins at Fori Imperiali and takes you around the scenic track, over cobblestones and back to the Colosseum to receive your medal.

Run 4 Rome is a relay race, where groups of 4 can each tackle one leg of 10 kilometres, to make up the entire race. This is for groups of friends, travelling buddies, even families to enjoy. Put together the team and then run the race of your dreams as you run past all the sights.

Use the toilet stops: Word has it that toilet stops along the track can be far apart, so when you happen upon a restroom make the most of it.

Have an ice cream: Order Gelati anytime of day though. There are no rules when it comes to ice cream!

History of the Rome Marathon

You will be stepping on the ancient spirits feet when you run the Rome Marathon. Think of all the gladiators and runners that came before you. The marathon is more modern than the city that its run in though.

Rome Marathon began in 1982. Many marathons were run in the years previous to the official Rome Marathon we know today.

One of the most memorable marathons in Rome was during the 1960 Olympic Games and in the Year 2000. The race started at Saint Peters Square so that Pope John Paull II could bless it to mark the beginning of the new millennium (the marathon ran on 1st January that year).  The competition also became part of the Italian Marathon Championships in 1982 and 1986.

In 2010 the race commemorated the 50th anniversary of Abebe Bikila’s win at the 1960 Rome Olympic marathon race, when the men’s winner, Siraj Gena, won a bonus €5000 for crossing the finish line in bare feet. 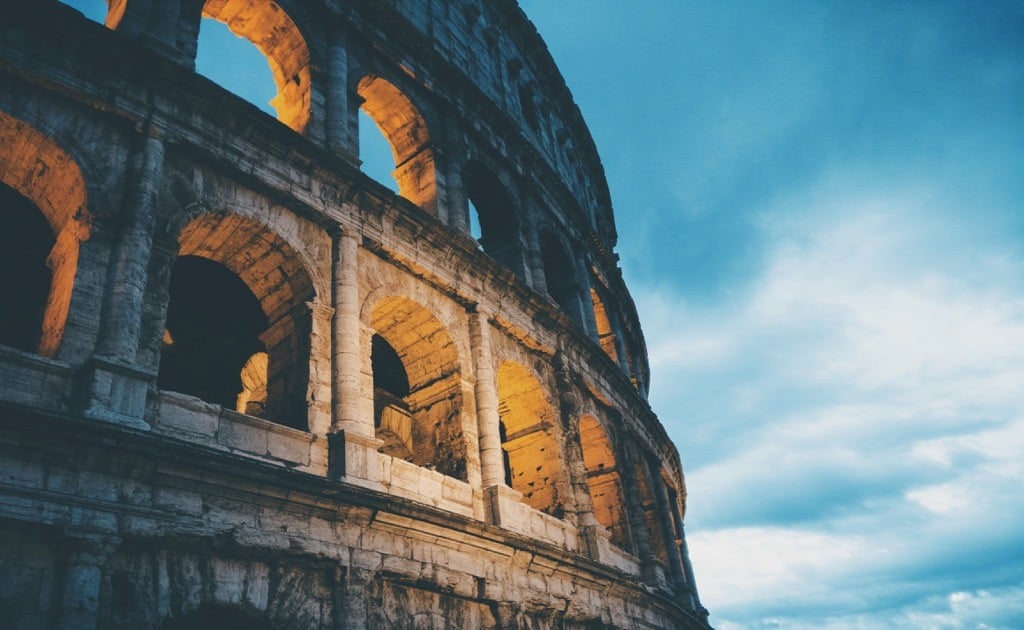 Things to do in Rome

The city is rich in history, awe-inspiring ruins and extremely beautiful buildings. You can find plenty of things to do in Rome that will make you reminisce memories from the past, such as touring storied cemeteries to pondering over ancient government headquarters.

To witness a more modern side of Rome, get yourself a boost at one of the best-renowned bars of Rome. Take part in the annual city marathon and enjoy the melodious outdoor Roman music.

What to eat in Rome

It’s very true that you can eat your way through Rome! So many dishes were invented here that listing them all is impossible.

Roman style Rigatoni Carbonara was invented in the 1950s, and by the Americans, but here in Rome they own it by adding raw eggs, Pecorino Romano and Parmigiano Reggiano cheese, Guanciale (which is cured pork cheek) or Pancetta. You can choose which pasta you would like under your sauce but rigatoni al dente is recommended.

Supli is fast food heaven for the mid morning snacker. It is a deep fried breadcrumbed ball filled with meat, tomato sauce and creamy rice. The best places stick a cube of mozzarella in the middle. Deliciosa! Get them from street vendors and enjoy them in the square with a cool beer.

All major European air carriers fly into Fiumicino Airport daily. The airport train departs from Terminal 3 regularly. One train service takes passengers express to Termini Station in the middle of Rome in precisely 32 minutes, the other stops all stations.

Where to stay in Rome

The accommodation rates vary on one’s personal choice and budget. A hotel to stay in, which is affordable and near to the main city called ‘Mario De’ Fiori 37’, comes at the top of the list. You can find the hotel in the heart of the Piazza di Spagna, where all the fashion triangle is available near to your doorstep. The canopied rooms are well-equipped with all the necessities and en-suite bathrooms.

You can also find various B&B’s and some of the best hotels in Rome which come at a low price and are a perfect option for a comfortable stay.

How to get around Rome

The transportation service in Rome is extensive and you have various options to choose if you are willing to travel from one place to another. You can walk, as the streets have a wide pedestrian path to walk freely and you can explore the city’s attractions in a better way.

Buy a city map or use Google maps to walk around easily. You can opt for the bus as well.The Bus system in Rome is operated by the Bus and tramway company (ATAC). The fares are very low and you can explore the majority of the parts of Rome in just 1.50 euro. The buses are less crowded and stop at several places.

Do you enjoy running? Read more about Athens Marathon in Greece, a true historic and heroic event born in 490BC and Brussels Marathon in Belgium, the ultimate sporting event in Belgium.

Stay safe: Even the best-laid plans can head south. SafetyWing travel medical insurance can help you stay safe and cover you in unlikely situations as well as that epic road trip or on your next adventure. How to stay safe during Rome Marathon 2023? If you’re not covered for your trip yet, get your quote here. 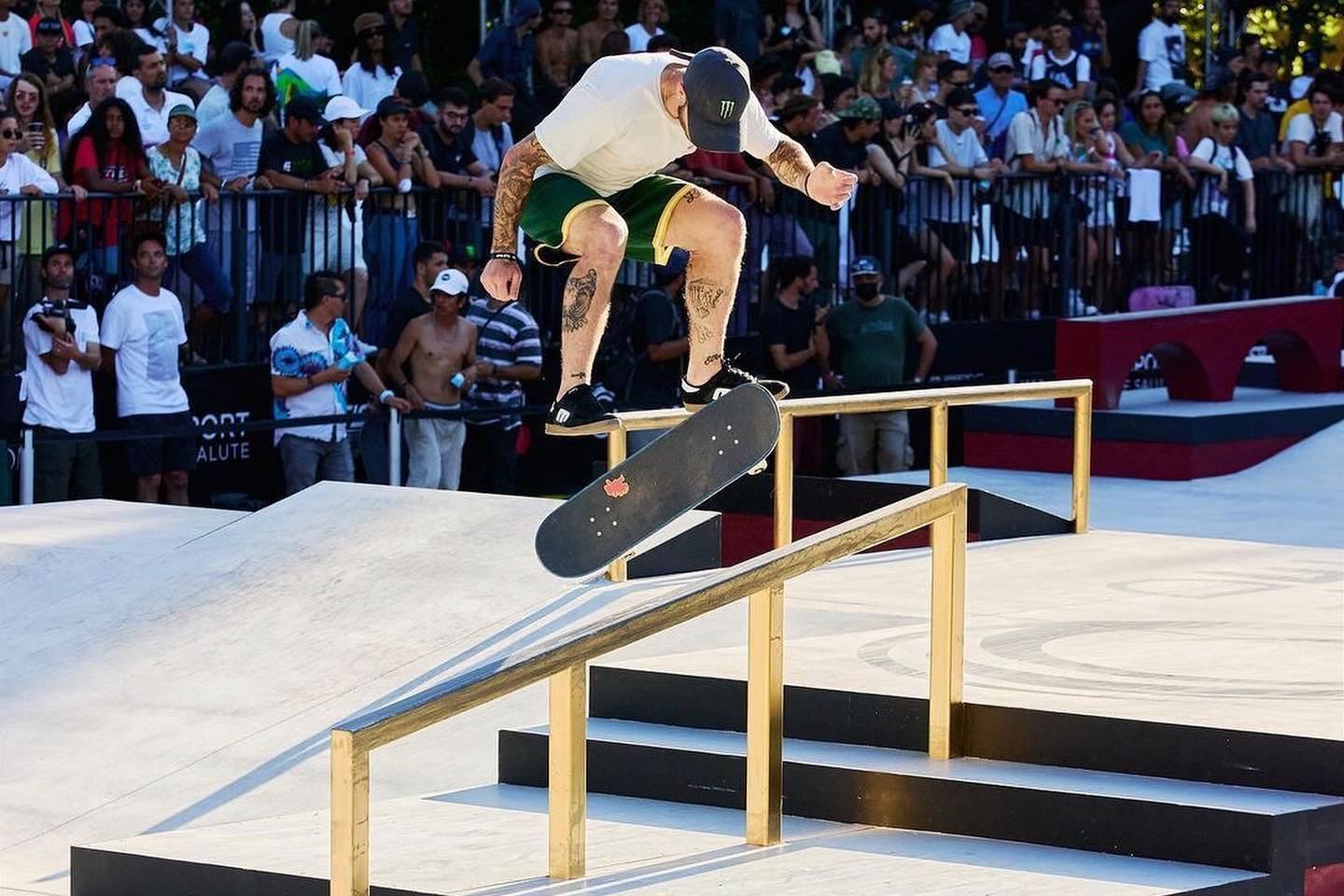 Rad Season is providing you with rentals and hotels at the lowest prices available online. Book your stay for Rome Marathon 2023 using the map below!