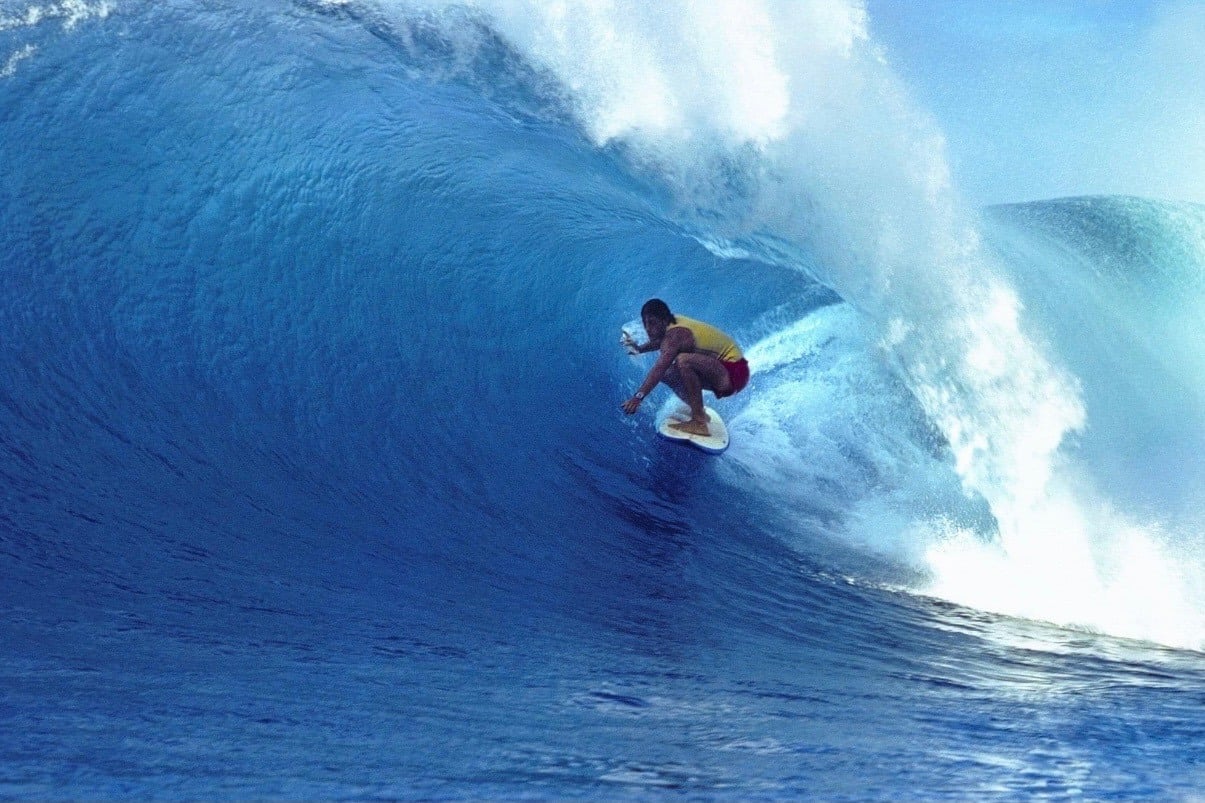 Today on Rad Season I’m going to be talking to legendary surfer Shaun Tomson. We’ll be discussing his time growing up in South Africa. Going to Hawaii being part of the Free Ride Generation, the whole Bustin’ Down the Door era, tube riding at Pipeline and Off the Wall, his Surfers Code and how he’s helped inspire 1000s and 1000s of people.

Oli Russell-Cowan: How did it translate between riding the waves back at home in South Africa to surfing much larger waves over in Hawaii?

I was lucky enough to grow up across from what is probably one of the most technically challenging, and one of the longest tube rides at the time in the world, a place called the Bay of Plenty. You could get 22 second tube rides. Skeleton Bay hadn’t been discovered and these amazing waves in the Mentawai Islands hadn’t been discovered. It was certainly comparable to Kirra in Australia, but a lot more consistent and I think a lot heavier too.

It was really a tube that helped me develop a new style of actually riding inside the tube as opposed to the Gerry Lopez style, which was shoot the arrow and let it fire, very much a beautiful, artistic, straight line approach. But my approach was based around the Bay of Plenty when you had this wave that was hitting a sandbank and warbling and doubling up and just really long and fast and I tried to take that approach to riding the waves at Backdoor, which was a completely new innovative approach.

Tube Riding and the Evolution of Surfing

For me it was a very creative time to be drawing completely new lines in the tube. Both riding inside and escaping through the back of the wave.

I invented this manoeuvre called the Turn Out, which is when you’re right inside. It’s great to see all the guys using it today.  You need it to escape and you didn’t want to straighten out. Today, they call it riding out the Doggie Door that manoeuvre of escaping when you’re inside the tube and then escaping through the side door or escaping through the back of the wave turning out back into the wave. 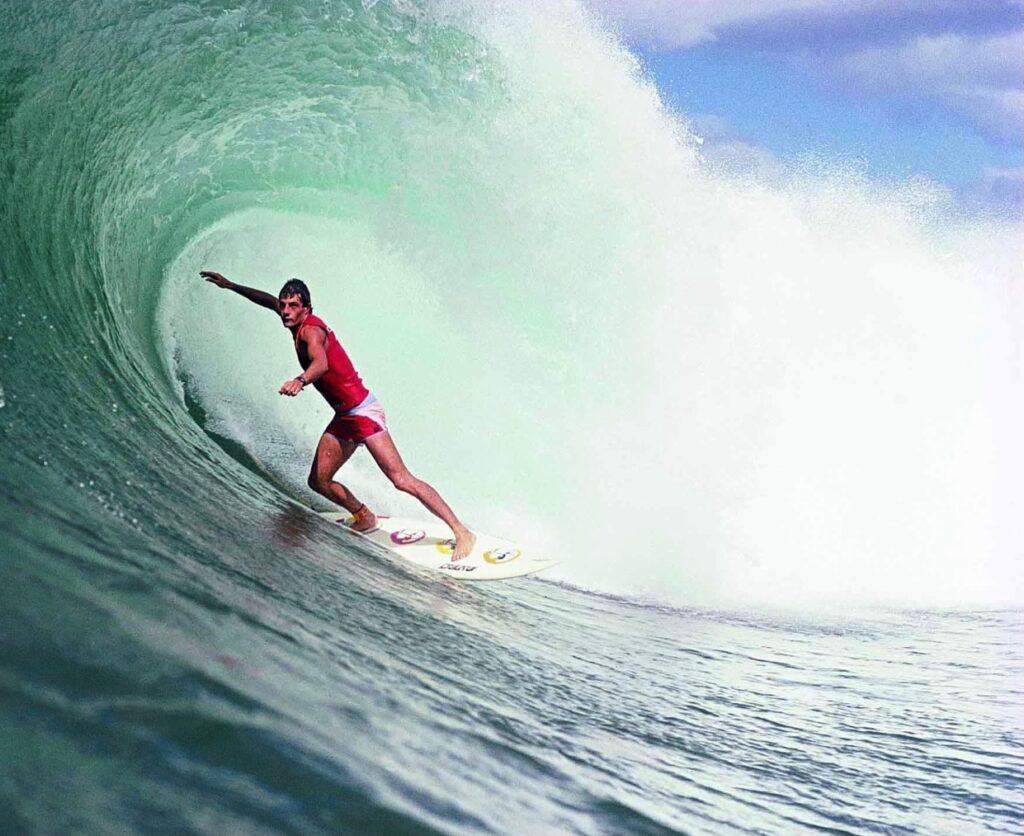 I had a lot more escape routes than other guys at the time. Of course you’ve only got like a one or two or three year head start then everyone starts using those techniques. Today the way that Kelly Slater and the other guys have taken tube riding to the next level it’s just wonderful to see. But it’s also very satisfying to know that you were part of that evolution and you are part of building that brick in the wall. So for me it’s been very gratifying to be a part of that evolution of surfing.

Oli Russell-Cowan: Who were you looking up to back then?  There was a group of you that went over to Hawaii known as the Free Ride Generation. How was it when you first got over there?

Shaun Tomson: We had a very tight group and we were all hitting it hard together Ian Cairns, Rabbit Bartholomew, Peter Townend and Mark Richards. We all wanted to be the best in the world and we were taking on radical aggressive stuff.

The three guys that I really looked up to were:

i) Jeff Hakman, I loved they way he surfed.

ii) Barry Kanaiaupuni just radical full on aggressive surfing. Barry was so radical that 50% of the time he’d be swimming because he’s trying these radical manoeuvres.

iii) Reno Abellira who’s most probably the most stylish surfer of all time, a guy that could ride one foot or he could ride 30 feet. He was also an incredible shaper as was Barry Kanaiaupuni.

I won my first event in Hawaii riding a BK. He was an amazing shaper and he actually inspired Mark Richards to create his first twin fin. Reno is certainly one of the most fundamental surfing revolutionaries of all time.

I would say those are my top three.

Then Gerry Lopez had his beautiful style and wonderful technique at Banzi Pipeline. Another one of our contemporaries that I missed was Simon Anderson. I mean, what an amazing surfer and surfboard designer. 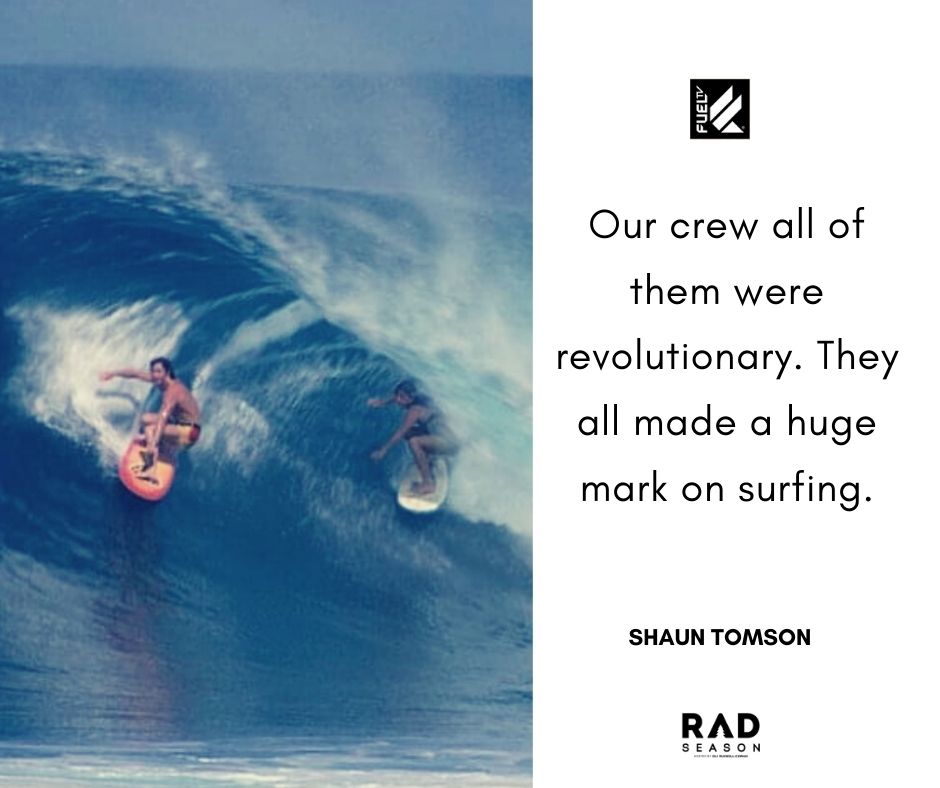 PT, Ian, Rabbit, Mark Richards. Simon, It wasn’t like they just went out won contests and went home. They all had a fundamental impact.

I was so honored to be a part of that crew. It was an amazing career. And it was an amazing journey. I think anyone that’s in surfing today can look at every single one of those guys for one form of inspiration or another. Every one of them in their own right, not just collectively made a huge impact.

The 70’s on the North Shore of Oahu

Oli Russell-Cowan: Now looking back on all those years and times together, what are some of your fondest memories from Hawaii?

Shaun Tomson: 1975 and 76 and you mentioned that a guy called Bill Delaney made a movie called Free Ride. It was really representative of that generation. 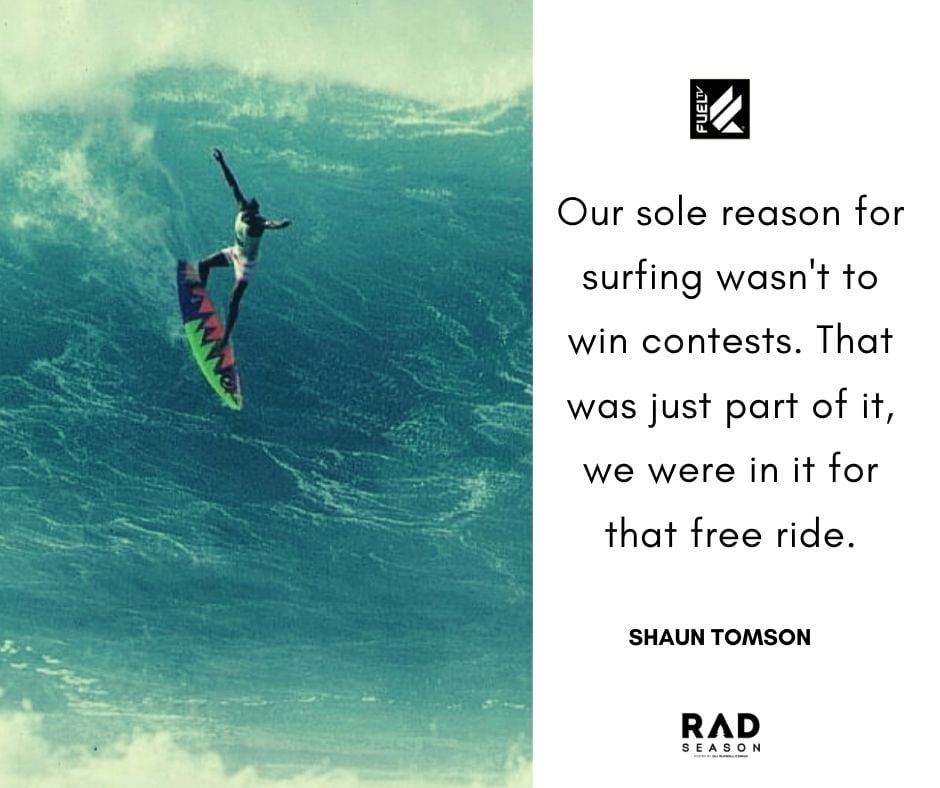 Then out of that evolved the whole Bustin‘ Down the Door vibe that rabbit wrote about and I made a film about with my partner Jeremy Gosch.

Both of those times were really wonderful for me the aspect of the freedom and the free spirit, the traveling and the adventure associated with free ride and then the whole professional movement associated with Bustin Down the Door and changing surfing and starting pro surfing.

The whole creativity associated with all of our surfing and the boards changing, tube riding and bending time and space and curling the water to my will and all that stuff was such wonderful pure memories.

Watch RAD SEASON Episode 10 with Shaun Tomson on FUEL TV Plus. You can also follow what Shaun is up to on Instagram on Shaun Tomson

Rad Season is providing you with rentals and hotels at the lowest prices available online. Book your stay near Montecito, California using the map below!