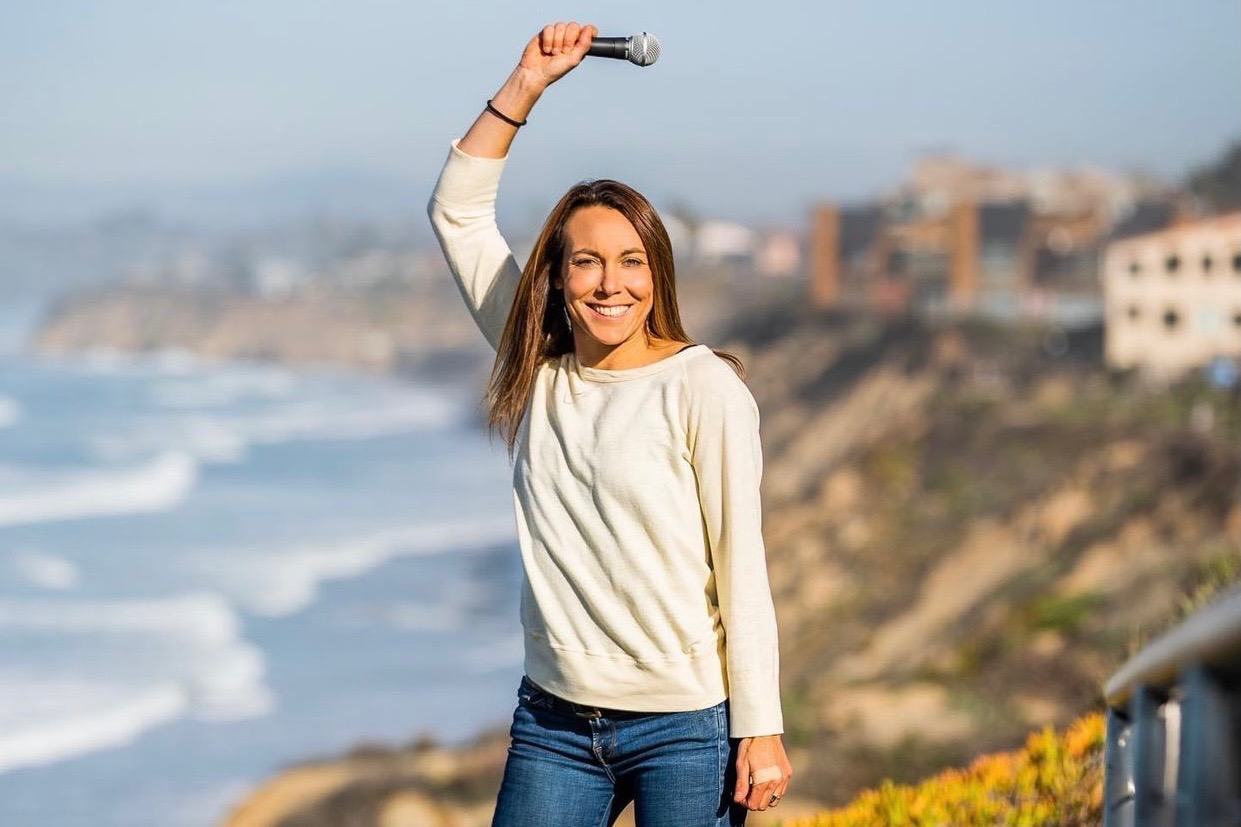 Shelby Stanger grew up in San Diego and got into surfing at a young age.  Her career path starting as a journalist having one of the coolest first jobs out of college ever as a writer for the Vans Warped Tour. She then got a corporate job inside Vans as the Women’s Marketing Manager and then Vans International Business & Marketing Manager.

Shelby will talk about mental health and wanting to do her own thing in the action sports and adventure world and how she started the Wild Ideas Worth Living Podcast and her belief that a little adventure is life’s antidote and loads more!

Growing up Surfing in Cardiff by-the-Sea

Oli Russell-Cowan: Where did surfing begin for you?

Shelby Stanger: I was really lucky. I grew up in Cardiff by-the-Sea, which was a town of a lot of surfers, and my teacher was actually Rob Machado’s mom. I worshiped Rob and wore boys Gotcha. There was no such thing as woman’s Roxy. You had to wear guys clothes.

My parents are from the east coast. My dad was a dentist and he grew up in New York. My mom is from Pittsburgh, and they didn’t know anything about surfing. They didn’t even go to the beach. I just loved it and I really wanted to be a surfer. It looked fun. It looked freeing. So I begged them to take me to the beach.

They would take me boogie boarding. So I would try to stand up on my boogie board. My Dad, I think he would have been supportive but girls just didn’t surf so he didn’t really get it. He ended up passing away suddenly from a heart attack when I was 11 and it was a total bummer.

That summer my sister got me a surfboard for my birthday. I turned 12 and I just realized this year that board had been buckled. It’s still on my rack. So someone sold her a buckled board. It had been glued back together. It’s like 6 foot, I couldn’t stand on it barely but I loved it. I like slept with it in my bed. 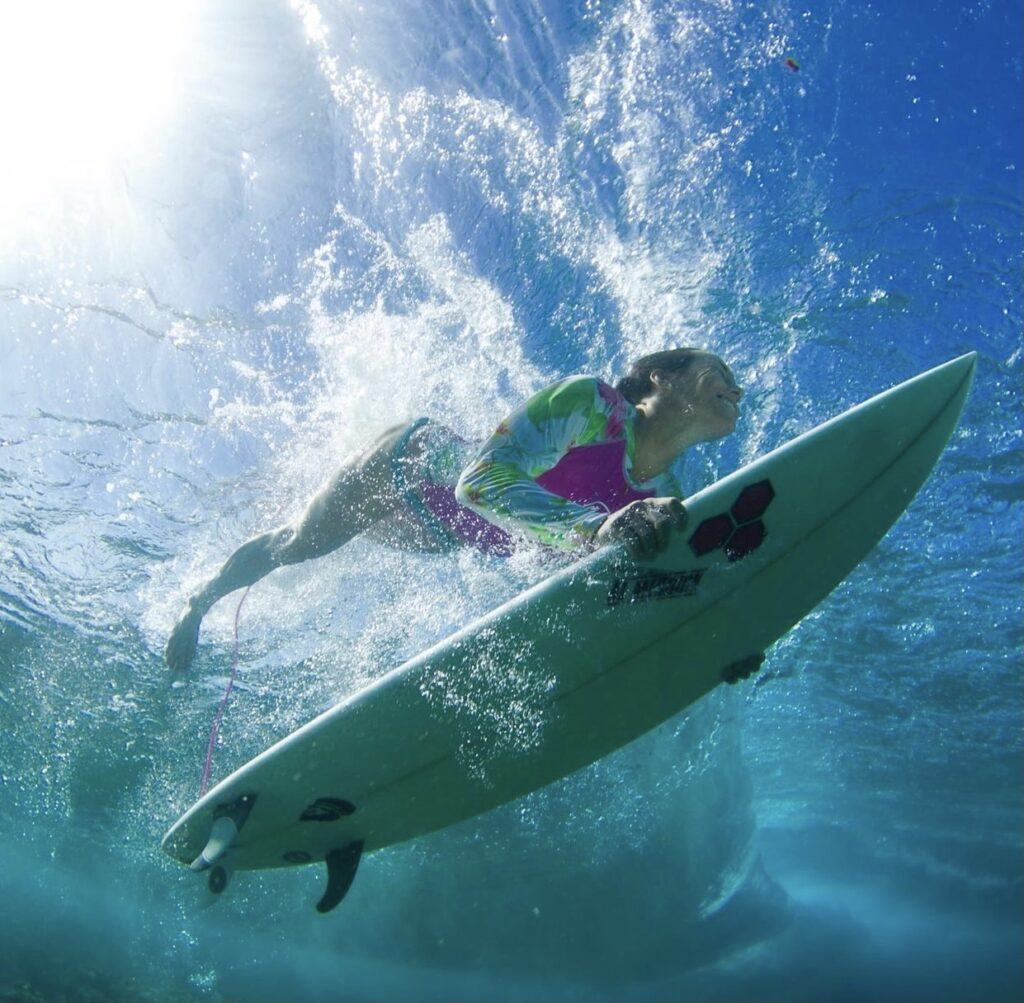 I tried to teach myself to surf and then I went to surf camp every summer and I had all these great instructors. Then one week I had this female instructor and all the guys liked her and she spoke fluent French and Spanish. She taught SAT classes. She had gone to UCSD. So we convinced my mom to let her be my babysitter when she went out of town.

My mom would go out of town. She was a single mom at the time. And this woman Izzy Tihanyi would throw ragers at my house, and was a great babysitter. She ended up starting an all woman surf school called Surf Diva.

I started teaching at Surf Diva from the age of 15, or 16. I’d say I’m probably better at pushing people into waves than I am surfing myself, but I love surfing.  I think as a little kid when I was 11, learning to surf, especially after my dad died,

I think surfing, it’s just such a good sport for a kid and you get a lot of answers that you can never get on land. You learn humility, you learn patience, you learn joy for joy sake.

I grew up in a family of overachievers where they’d like to work really hard. 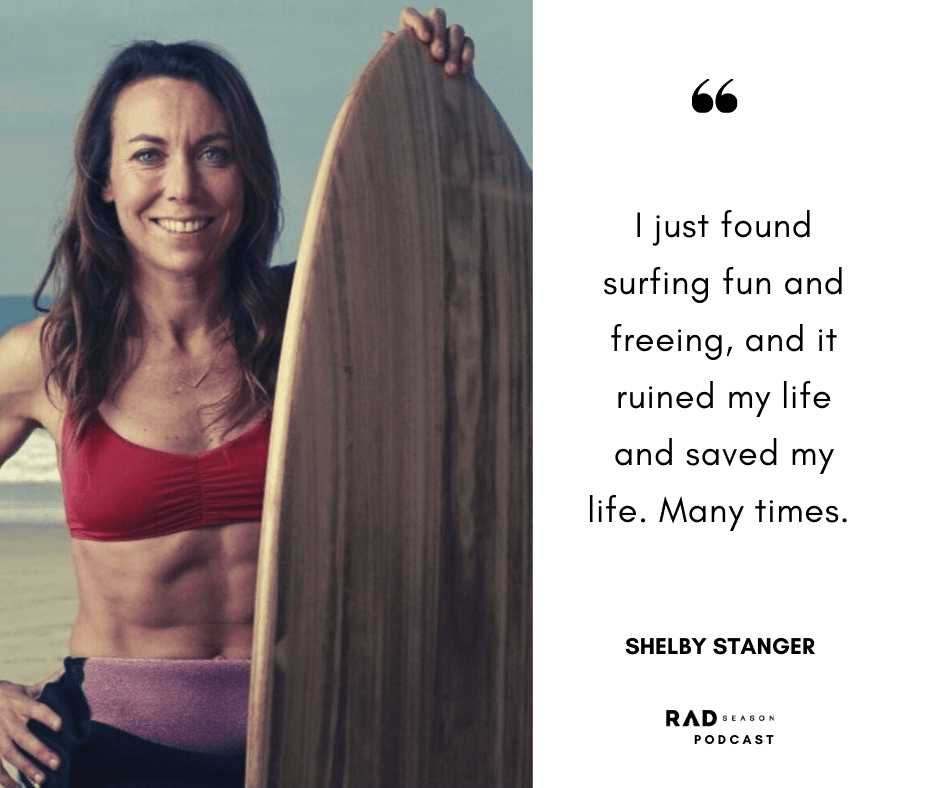 A lot of my decisions have been based around surfing and I even met my partner for life teaching surfing in Costa Rica. He was out there. And I just thought he was really cute. I paddled out one morning before I was teaching lessons. And he happened to have been living in San Diego. So I just kept taking his waves. There was so many waves to be had. But we just thought it was cute. So I kept taking his waves. Then eventually he talked to me.

Russell-Cowan: When did you go over there, was that before College?

Shelby Stanger: Oh, no. This was many years later when I was 29 years old. I should have been really responsible. I just quit my job at Vans at the height of the recession in 2009 to be a journalist. Everybody’s like, you’re absolutely crazy.

I did a have great job at Vans. It didn’t make a lot of sense on paper. But I wanted to be a storyteller. At that point, that meant telling stories through magazine articles. A friend of mine Izyy from Surf Diva was like, why don’t you go to Costa Rica and teach surf lessons. You have this time in your life where you can do it. I was like, that seems so irresponsible. I went to this good college. You know, I was trying to make it as a journalist. And at that time, that meant pitching magazines and working your tail off to get clips.

Eventually, she convinced me to do it. I was able to work for companies while I was living in Costa Rica. I had an early version of Skype.  I just thought it was like such a genius invention.

I could tell people that the monkeys overhead were freeway noise.

I just thought it was so clever. Nobody really knew I was in Costa Rica while I was working. But I taught surfing and then I was able to consult and write articles from there. 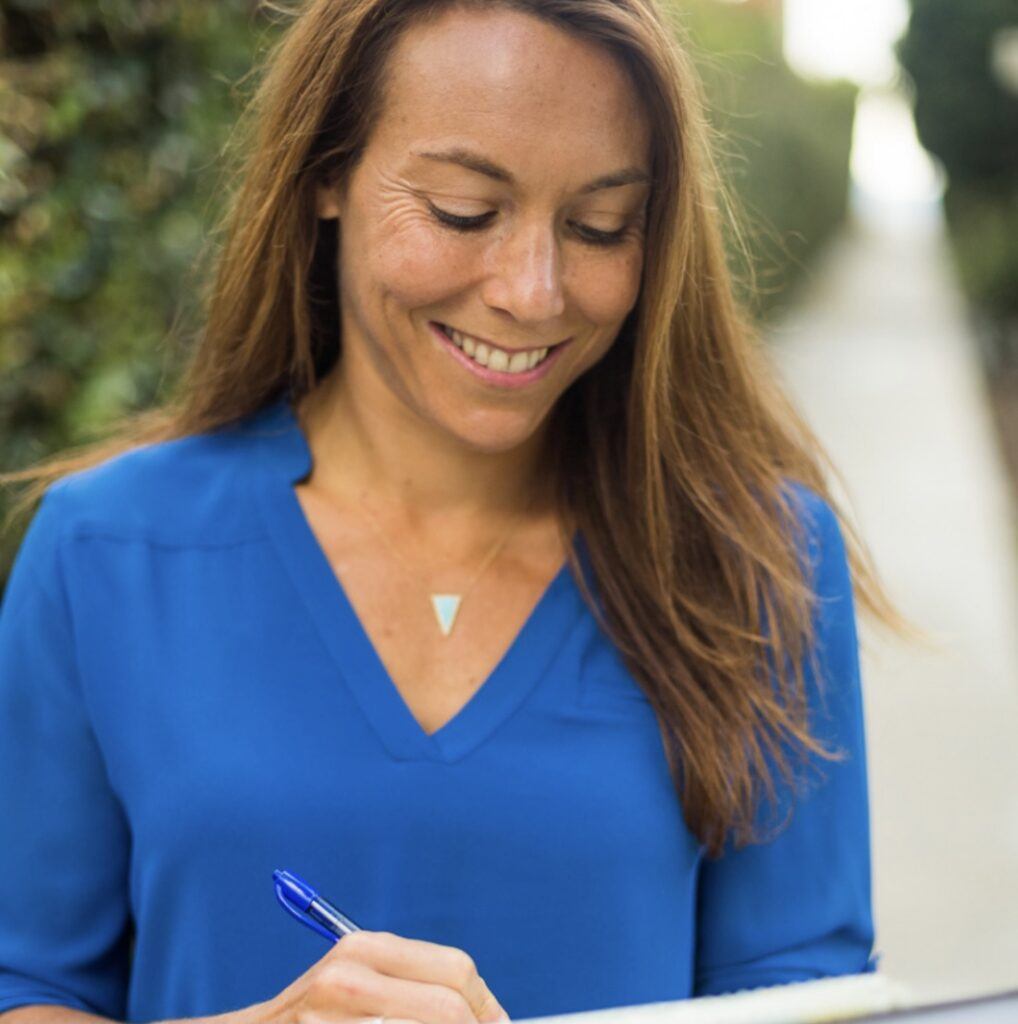 Russell-Cowan: Were you passionate about writing when you were younger? You then studied journalism at University, right?

Shelby Stanger: When I was young I was a really good writer. I’m trying to do a writing project now and I was much better when I was younger. I also don’t love staring at screens, but I love how writing makes me feel and I love telling stories.

Back then there wasn’t podcasting so how we told stories was through writing. My mom was a college professor so I learned to read and write young. I’m also the youngest of three girls. My sisters were kind of nerdy, so they got me into reading and writing young.

I was told I was a good writer so I thought I was a good writer. When I was 15, I won an essay contest for the local newspaper, The San Diego Union Tribune, and I got my first article in print. It was really cool. The teacher said, ‘hey, you’ll get extra credit if you enter and if you win, you get an automatic A’. I was like, awesome. And I won. And I didn’t think I’d win. But I won.

The next year, I wrote for a magazine that my sister had found she was at Stanford, and she did a study abroad in Washington DC in the capital of the United States. While she was there, she met these girls who started a magazine for kids and by kids, and I became a youth reporter.

Kids wrote in and said hey your story affected me. I was a really big time soccer player.  I was a diehard soccer player because there was actually kind of a future. At least you could go to college as a woman if you played soccer and play through college back then. There wasn’t really professional soccer like there is now.

I shared a story with a soccer teammate and she said, ‘Hey, Shelby, I shared your story with my boyfriend. And last night he decided he was not going to drink anymore.’ And I was like, Oh, that’s awesome. This was a girl who partied, I didn’t think she really even read. I just thought she was a bit of a jackass, to be honest. She really liked my story and it resonated. I was like, cool. I’m going to be a journalist.

So I went to journalism school at Emory University in Atlanta, Georgia. I interned at a ton of newspapers, and I got to work at CNN. I covered real stuff like fires and city hall.

Writing for the LA Times

So right out of college, I pitched the LA Times. I’m like, can I be your action sports reporter and at the time, they had nothing like that. The X Games had started. The editor in chief of the LA Times he appreciated my enthusiasm and my ability to cold call him and find his number. He was like Shelby, there’s no such thing. You should talk to the PR people who work at Vans. That’s kind of how I got connected at Vans.

Rad Season is providing you with hotels and Airbnbs at the lowest prices available online. Book your stay near San Diego, California using the map below!