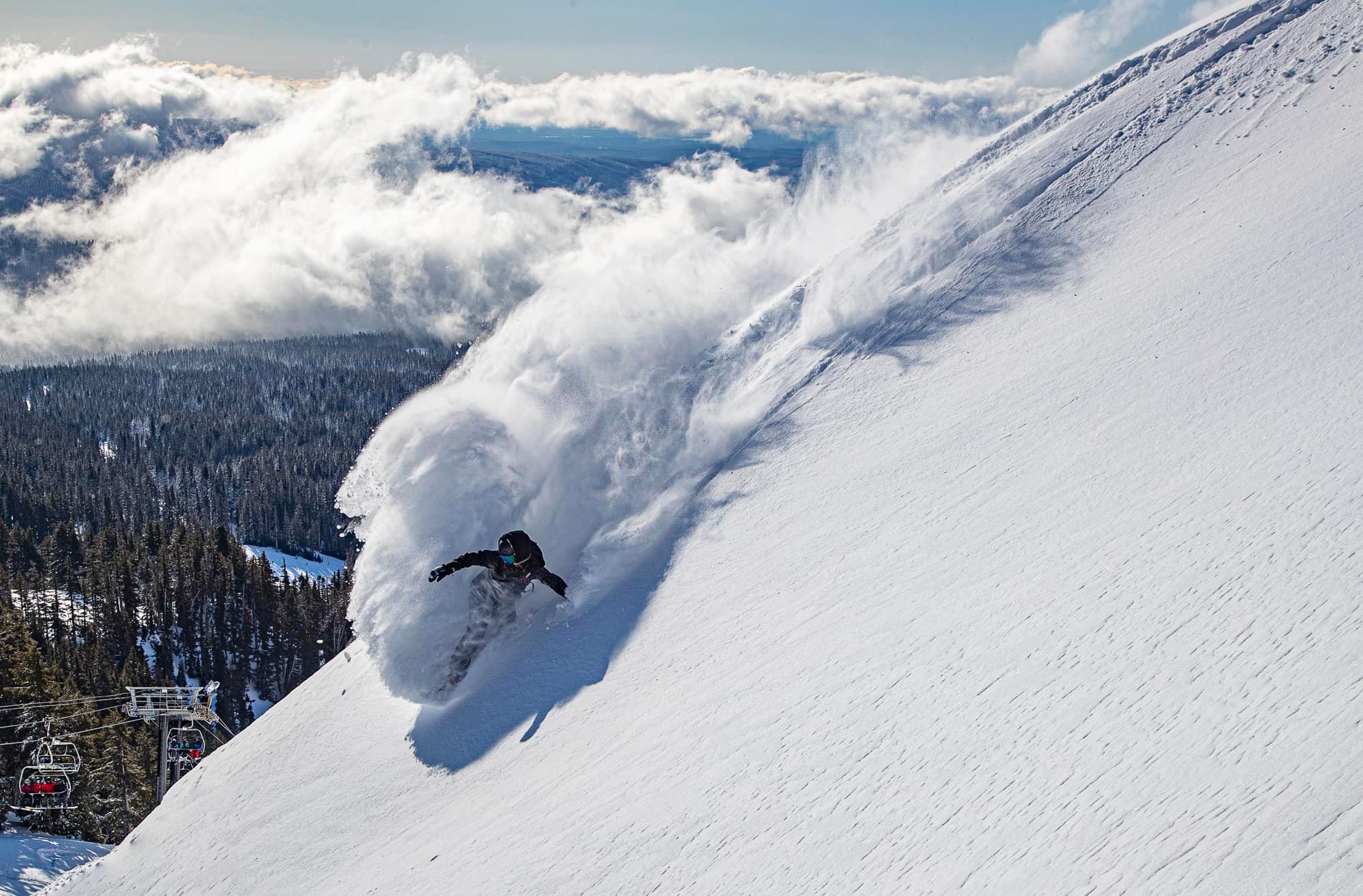 Erika Vikander is an American professional freeride snowboarder, who just took 3rd place in the 2021 Freeride World Tour which was televised on FUEL TV. Growing up in Montana, Erika started snowboarding early hitting the slopes every weekend. Starting off with Slopestyle Erika competed at the Grand Prix, The Dew Tour and US Open, and even qualified for the Sochi Olympics until she tore her ACL. Oli Russell-Cowan speaks to Erika about coming back from injury to getting on the podium at every single Freeride World Qualifying event and the Freeride World Tour now. 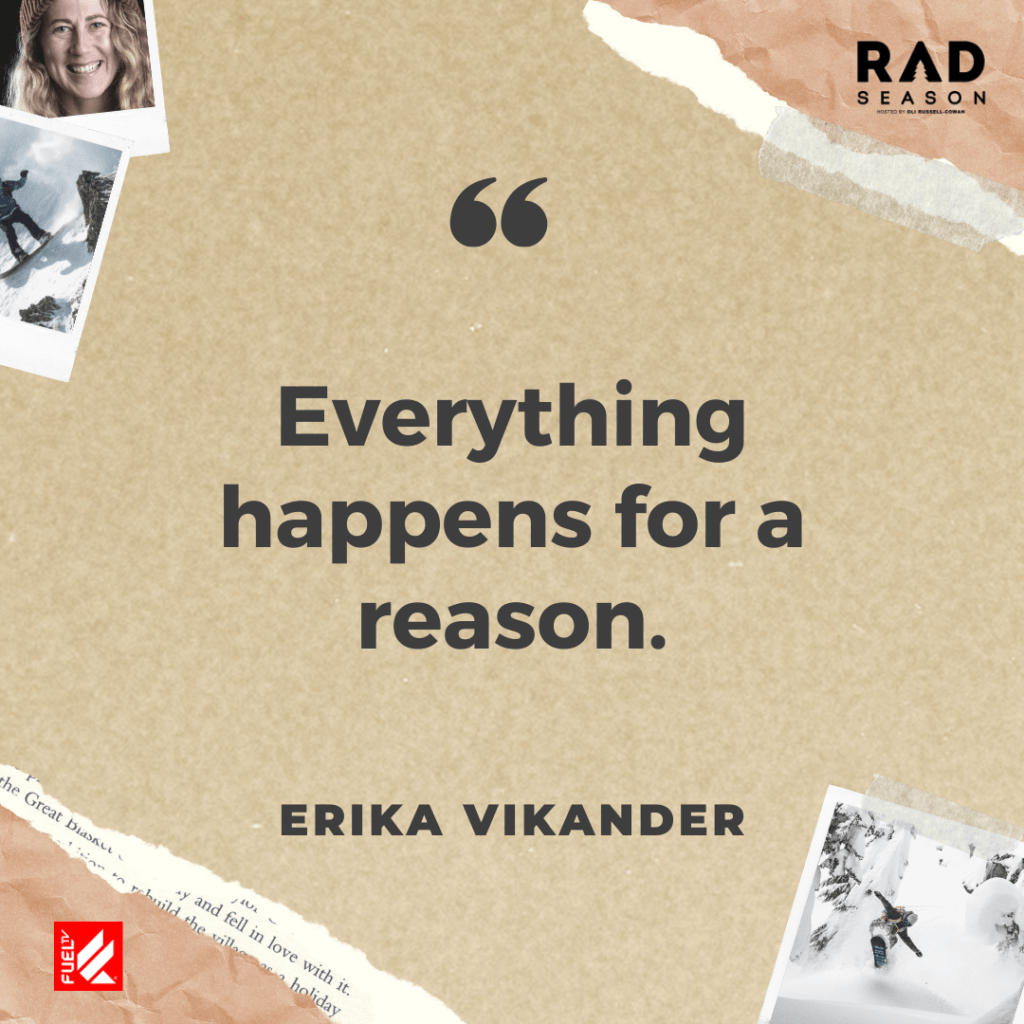 Being a Professional Snowboard Athlete

Oli Russell-Cowan: What did you focus on in snowboarding? Were you doing pipe? Or were you looking at slopestyle?

Erika Vikander: In the beginning, I was primarily focused on slopestyle. To me, that seemed to be the most direct way to get to where I wanted career-wise in the snowboarding world. I mean, there’s a lot of different aspects and paths that you can take in order to become a professional or to be able to make a living.

For me competing is just the most tangible way. You’re the best, you win money, you go on to the next level and work your way up from there. So that was a good way for me to get started. I started out slopestyle, little competitions and then I moved up into the Grand Prix, then the Dew Tour and US Open. I got to compete in some of the biggest slopestyle contests in the world.

I was actually on my way to qualifying to go to the Sochi Olympics, the first time slopestyle was in the Olympic Games. And that’s when I, unfortunately, tore my ACL right before I would have gone. That steered me into this big mountain freeride stuff that I’m doing now. It’s so cliche to say, and I hate it, but like, everything does happen for a reason, I really believe that.

If I hadn’t done that, I probably would have ended up just breaking myself off more for the next few years during slopestyle. And, and not being able to continue the career that I have now, at this level in the park, because I just wasn’t willing to break myself off. And the stuff that the girls are doing now is so amazing. I’m so psyched that I’m not a competitive slopestyle athlete anymore. 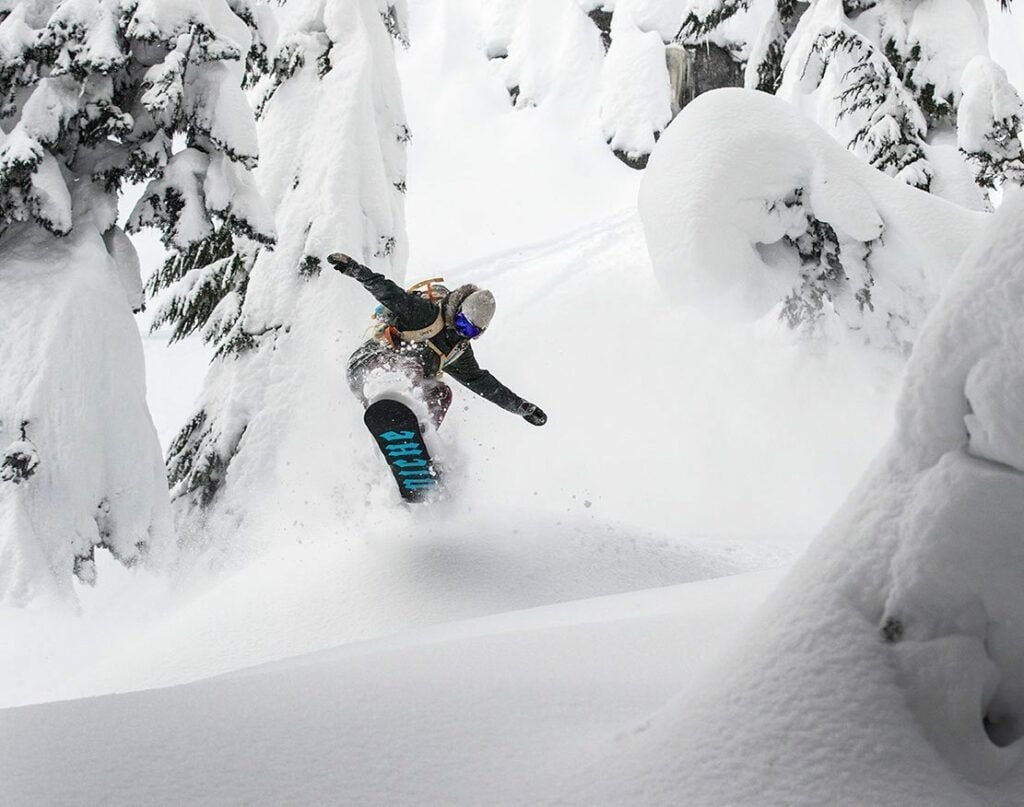 Russell-Cowan: Back then in the day when you were looking at slopestyle was it just about winning events and gearing up to the Olympics?

Vikander: Well, the Olympic thing didn’t really come to fruition at all obviously. So no, for the most part of my career, I was just riding. I just wanted to snowboard. I’m a competitive person, I just want to be the best. Compete, try to get better, keep living your dream.

I lived my whole life with the philosophy of everything’s gonna work out and everything’s gonna be okay. And everything always has been to this point in my life. So I’m just gonna stick with that philosophy. And no matter where I end up, or what I end up doing, I know that I have the power within myself to be happy and grateful and stoked in any place and whatever I’m doing. So I’m like, whatever happens, happens, it’s all good. And that’s it.

Russell-Cowan: When the injury happened and you tore your ACL, that must have been devastating. How did you deal with that, mentally and physically?

Vikander: I have to say, it was a lot more difficult mentally, but regarding the physical part of it, I have a very high pain threshold. It’s sucking up and doing your physical therapy, going to the gym, pushing through the pain and icing, and then pushing through the pain some more. That part wasn’t hard for me at all, it was the mental aspect of it. I just worked for four years to get to this place. And it’s all gone like that. All my sponsors dropped me. It was like my whole life changed. Mentally I went into a dark place for a little bit.

I think I’m pretty strong mentally, I’ve been through way harder shit in my life than blowing my knee. I told myself, Alright, put your big girl pants on and deal with it. Suck it up, you gotta make it happen. I started focusing on meditation, breath work and yoga and all this other hippie shit that I still love to this day.

If you want to come back, you have to mentally come back stronger.

Russell-Cowan: Did you do any meditation or yoga before? Or were looking for things that could speed up the recovery or just help you deal with it all?

Vikander: I don’t know that I was looking at it as a speed-up thing. It was more about what this piece is missing from my life. I do this super high-intensity stressful thing and I have no way to unwind the mind. So meditating and yoga definitely help a lot.

Psychology, essential oils, and crystals are so interesting. I was thinking, I have time now, I might as well look into this stuff that I’ve been interested in and just haven’t found the time for it because I’ve been snowboarding. I have six months to just lay here. So let’s do it. 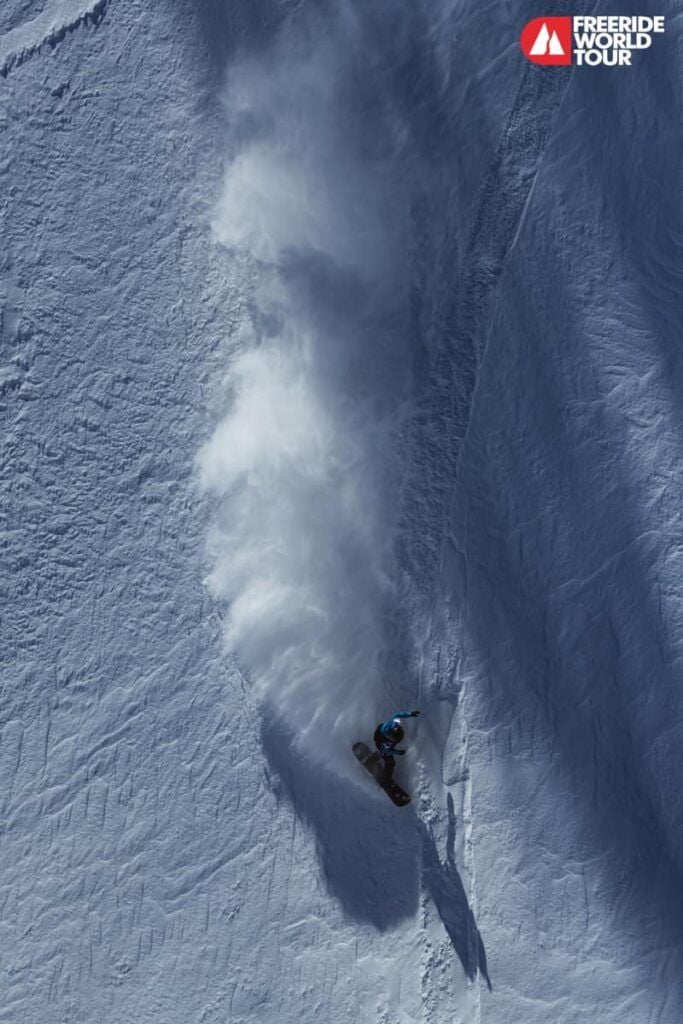 Russell-Cowan: What was going through your head? Were you looking to get back on the snowboard doing slopestyle?

Vikander: I think at that point, I was thinking about coming back to slopestyle. The main thing with my recovery was I just saw how many of my friends have torn ACLs. They tried to come back too quickly, then tear the same knee and end up having four to seven knee surgeries. I knew I didn’t want to do that.

I really pushed my time getting back onto the snow. I got back on at six months and I pushed it pretty hard. Honestly, in hindsight, I wish that I had not pushed it as hard because I think I may have done a little bit of damage on the recovery.

When the winter started, I made the decision to fully take a year off of all slopestyle contests. Riding is one thing, but coming off of a knee surgery and case an 80-foot jump, you’re probably going to blow your knee out again, or you overshoot. These two things are very likely to happen, you’re not going to hit every jump with perfect speed.

I paid for all my own stuff and I didn’t have a tonne of financial support. I had to pay for my surgery for my knee and I just can’t afford to do that again. So I’m gonna do whatever it takes to not do that again. So I took a full year off of slopestyle. And then I came back the following season and I just didn’t feel it anymore. The love and the passion just weren’t there anymore.

I wasn’t done being a snowboarder, and somebody suggested that I try one of the big mountain freeride events. I thought that sounded cool. I grew up in Montana and I know how to snowboard. I went to Snowbird, Utah, and just entered. I was this random girl wearing a double XL hoodie and all the rest of the people wondered Who the fuck is this girl?

I got second at the first round every day, and I thought Oh, cool, this is a thing. I realized there was this whole series and people that take it super seriously like the Freeride World Tour. I thought I’m gonna give this a go. 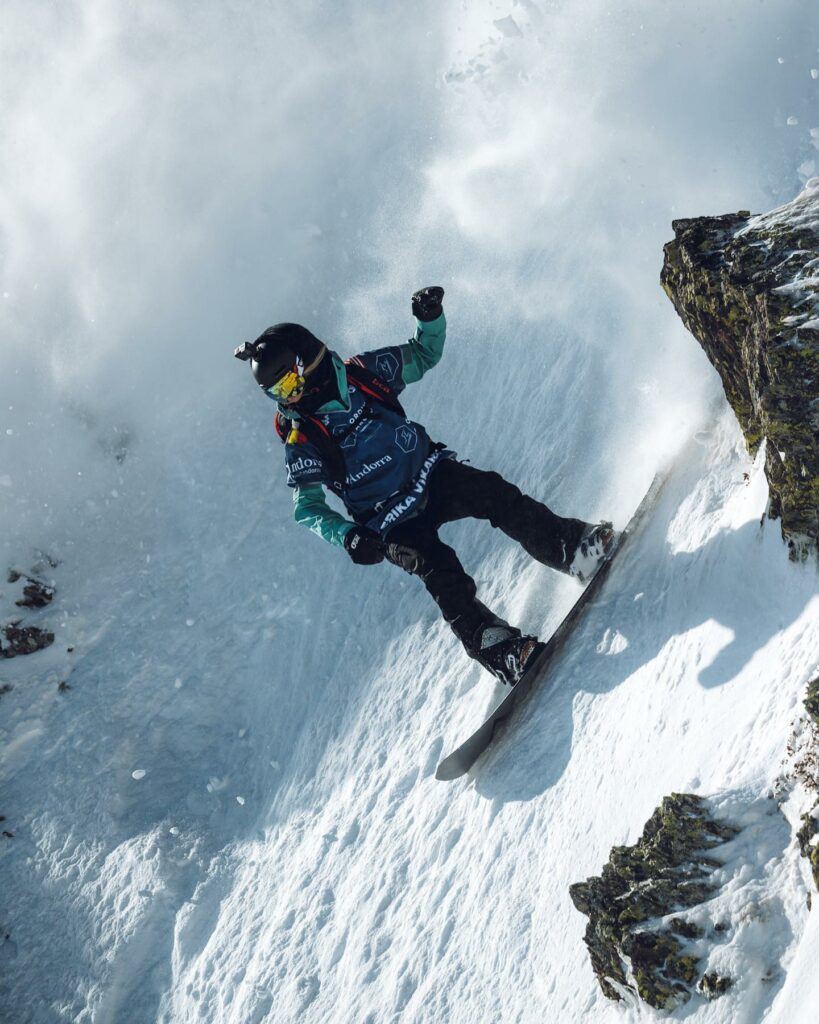 Russell-Cowan: Did you know much about it before that?

Vikander: I basically thought, what do I have to lose? I like competing and I like snowboarding. Let’s go give it a shot. After that result in Snowbird, I think it planted a little seed where I wondered how do I qualify for the Freeride World Tour. And then someone told me, do this qualifying tour, and you have to win the whole overall. And I thought that sounds really hard.

I went the next year and got on the tour. And now five years later, it will be my fifth year going in the season. It was probably the best decision I ever made to go do that little free ride contest. Had I not done that I probably would have just phased out of slopestyle snowboarding and competitive professional snowboarding altogether. I would have never got to actually explore what I have to offer in the snowboarding world. So again, everything happens for a reason. I definitely didn’t want to blow out my knee. But if I didn’t do that I wouldn’t be where I am now. 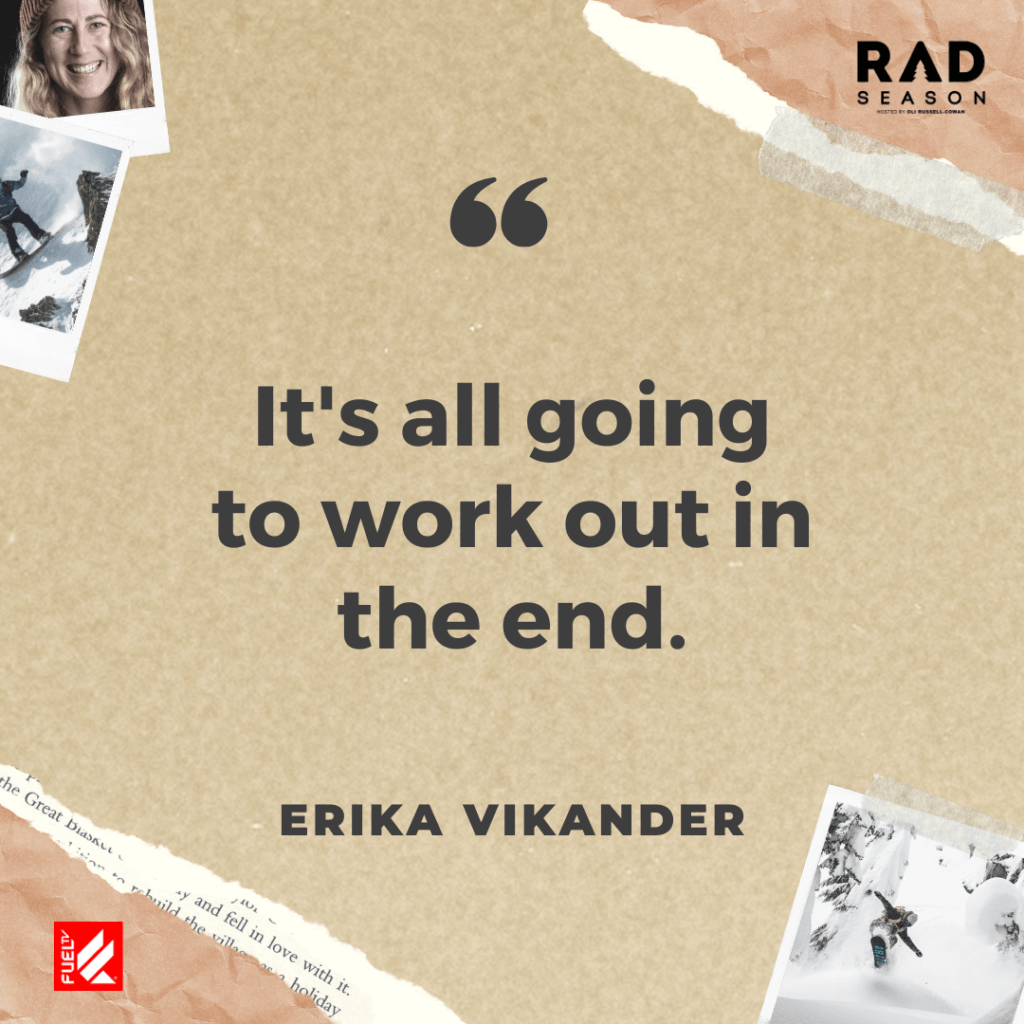 Watch RAD SEASON Episode One with Erika ‘The Viking’ Vikander on FUEL TV Plus.

Rad Season is providing you with rentals and hotels at the lowest prices available online. Book your stay near Mount Hood Meadows using the map below!