Gary Fisher, the GodFather of Mountain Biking and Founder of Fisher Bicycle

Gary Fisher grew up in Beverly Hills then moved to San Francisco, California riding road bikes as a kid and persuaded the Belmont Bike Club to let him join them. This opened up his world to racing bikes taking wins in the TransAlp and Masters XC national title. He set the record for the Repack downhill race on a modified bike which lead to Gary coming up with the term ‘mountain bike’ in 1979. That year Gary and Charlie Kelly founded MountainBikes specialising in bikes that could be used in off road terrain.

Find out how Gary came up with the idea for the mountain bike, his time as a bike mechanic, bike tester, journalist and lighting engineer in the late 60’s for bands like the Grateful Dead and Janis Joplin, dealing with Hells Angels, his family background in Hollywood, importing mountain bikes around the world, selling his company to Trek Bicycle Corporation and so much more!

Oli Russell-Cowan: How did you first come up with going off-road?

Gary Fisher: Well, I’d gone off-road on a cyclocross bike. That was when I was a kid, when we were living down in Burlingame. Then we moved to Marin in 1966. There were some guys in Redwood High School that were obviously hippies. It was my friend who lived a few blocks away from me. He was in this Larkspur Canyon Gang. We both went to Redwood High, and I met all the other guys in the gang. It basically started out with drum circles, drumming.

Larkspur Canyon Gang was a culture of hippie kids, drum circles, then the Klunker scene. 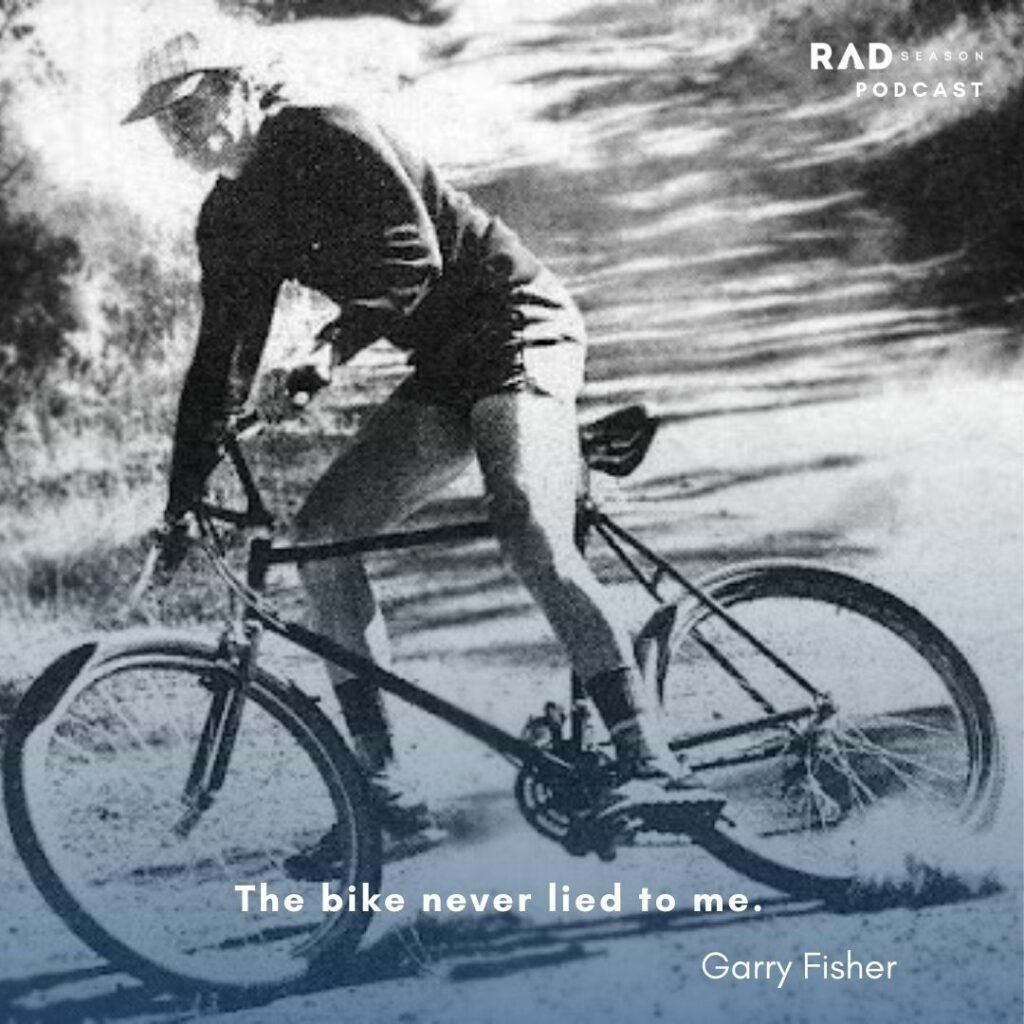 The Klunker scene was getting a bike for five bucks, because you could literally buy a bicycle for $5 that was good enough to go and ride out there. They approached me and said, ‘I know you’re into bikes, you’ve got to come and check this out.’

It hit me right then. I was a junior in high school and I’m out riding with them on big fat tire bikes and I’m going this is a lot of fun, because you can go really fast without a puncture.

The problem with the cross bike is you’d go out in the woods and you’d take three tires over your shoulder. You’d ride for an hour and then you’d patch tires for three hours. It was ridiculous! There’s so many rocks and stuff and you’d want to let loose.

Big hills, long descents something like two miles long. You don’t want to have to mince down it. You want to be able to let loose and get to terminal speed.

Cross bike was stupid out there. This made sense a lot of sense. I got a couple my own klunkers around then in high school. Then I went away for four years and hung out with the Grateful Dead.

Then I came back to Marin in 72 around then. I immediately started getting into road racing again. I met Charlie Kelly, too. He was another roadie and everybody said, Oh, you got to meet this guy. He looks like you had long hair like me and he rode an orange Colnago. I had an orange Colnago too.

He was a roadie for a band called Sons of Champlin. They did a tremendous first album, it was a double album, he went on a road to go promote it. They ran out of weed, and said, forget about it. Let’s go home. So he went home and forever, they were always doing this. They were what you call them musicians, musicians, you know.

Finally, Bill Champlin wound up with Chicago and they got Emmys and all this sort of thing. The other band, they played for 30 years. Their shows were always packed but they never made any kind of money. 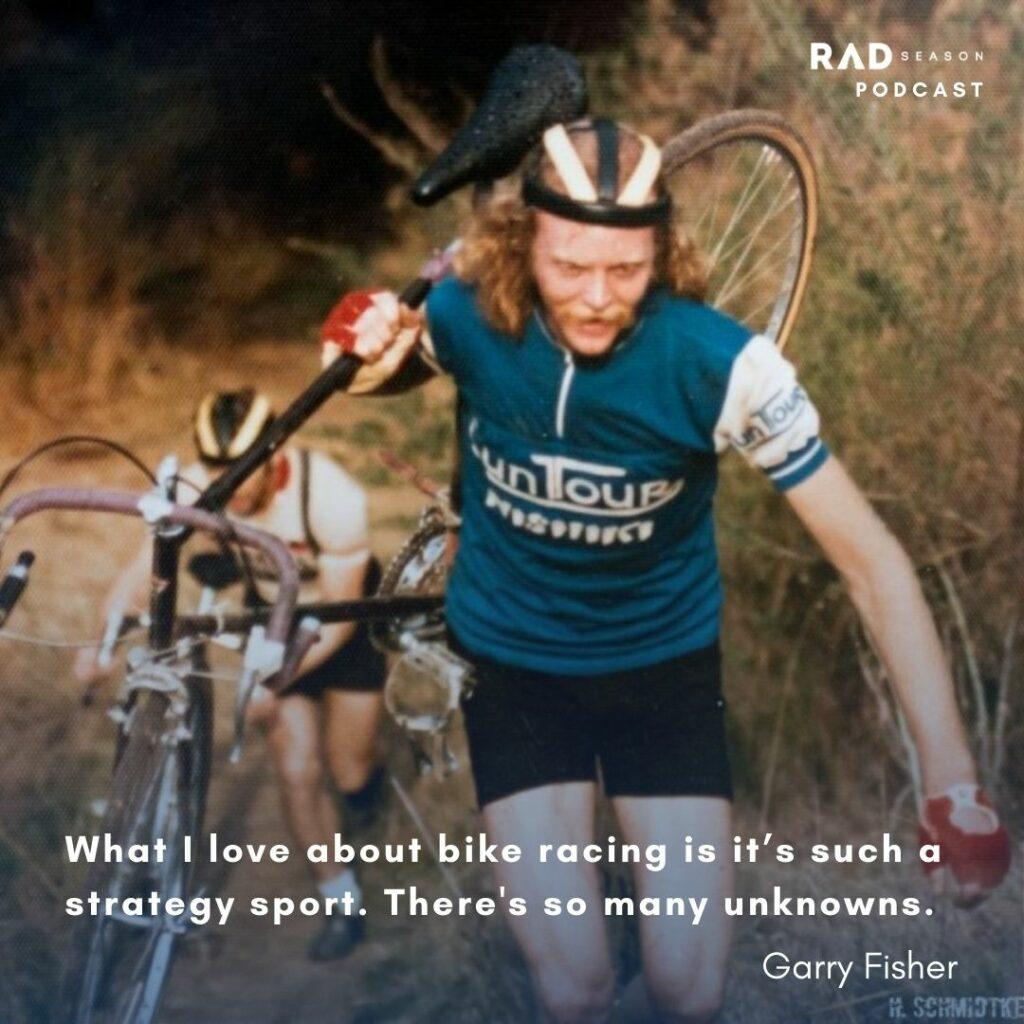 Charlie’s house was a lot of fun, because it was right there at the centre, where you could train, I love that part. I decided to start a company. I said Charlie you want to be in this thing. So we raised 600 bucks, and started mountainbikes.

I thought of that name right there. Basically. It wasn’t until 79 until you could buy an alloy rim. You had to use a steel rim. Joe Breeze’s first bikes used steel rims. When he first brought him out, weak breaks and a used bicycle cable, which compresses. oh my god man in the rain, forgot about it, no way.

I started my little thing. I made a bike for Charlie. I made a bike for his friend Fred and then I made bike for Bob Boroughs. That was it. The fourth bike was interesting on because this guy, Bob, he lived down the street. He was a San Francisco fireman, but man, he was in lousy shape. It had been my experience that on the roadside, somebody that’s all excited gets into it. They’re not very fit at all. They don’t wind up being road riders, because you’ve got to be able to have a low position, a lot of them go away from it after a little while, they get saddle sores, they get flat tires, and they say forget about it.

Bob got into this and he never quit. You take these old steel rims, they were 42 ounces, each, each rim. New rims are like 10, 12 ounces. Joe breezes first bike, that first beautiful piece that he made with the twin laterals. That frame is now ther frame alone is about 11 pounds.

The old Schwinn Excelsior frame, seven and a half pounds. We actually did a frontal impact test on one much later on. It went to 1100 pounds. A traditional road bike could be 650 pounds, it’s like the amount of pressure you can put on the front end with the jack and pulled on the front end and pulled it in from the bottom bracket. It had a faults fork in it, this big triangulated piece of heavy steel that wouldn’t move and everything. And this is how much it took to collapse the front end. Because on a mountain bike you needed more than a road bike. We figured that out early on. I mean, the first frames that I had made for me, which were Geoffrey Richmond and Tom Ritchey. He won the race he built more frames faster. 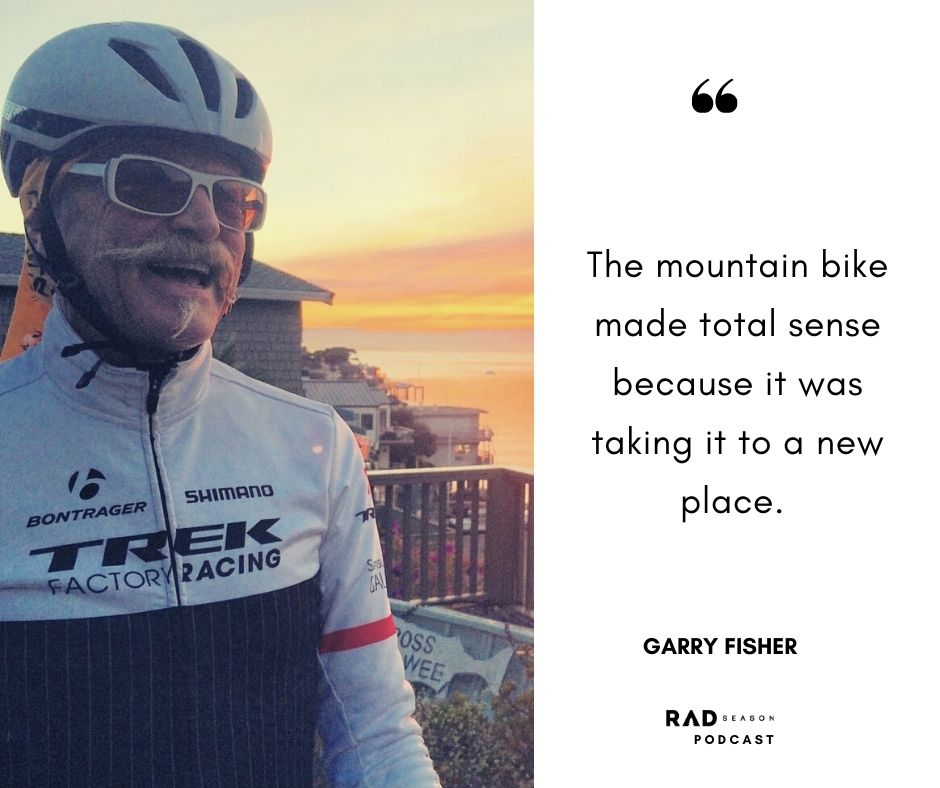 Oli Russell-Cowan: Was Tom then doing all the frames for you guys?

Gary Fisher: In the very beginning, he was the premier builder of frames. He didn’t fool around man. He had his moves down and he could build a lot of frames fast. But you got to consider, I’d show up with the tubing. You’d had Dave and Devin do the mitering and then put them into jigs tack the frames together and Tom did one thing.

He was that good. The other guy that got good was Tom Teasdale he’s another one midwesterner. He was making frames for me for five years. He found out better ways to make money, make tires, make royalties off of other distributors, which is a really good sound way to grow. I was trying to import everything.

Rad Season is providing you with hotels and Airbnbs at the lowest prices available online. Book your stay near San Francisco, California using the map below!