Concurs de Castells: Catalonia’s most legendary and fearless tradition There will be a human tower competition this year. 10 of the best groups will participate in the event that will be broadcasted by TAC12 and the Local Communication Network on October 2, 2022. Participants are: Capgrossos de Mataró, Castellers de Barcelona, Castellers de Sabadell, Castellers […]

There will be a human tower competition this year. 10 of the best groups will participate in the event that will be broadcasted by TAC12 and the Local Communication Network on October 2, 2022.

Unique, doesn’t even come close to describing the Concurs de Castells festival in Spain. In fact, this event is more of a competition than a festival, thousands of people gather with the aim of building towers together. But not towers made from wood, metal, plastic, or any other kind of material, towers made from people.

That’s right, human towers. Exactly like the stunts that cheerleaders perform only with a lot more people and a lot more height.

A dedicated human net surrounds the tower and spreads out for the entire width of the arena. The top three levels of the tower wear soft helmets but the rest do not. 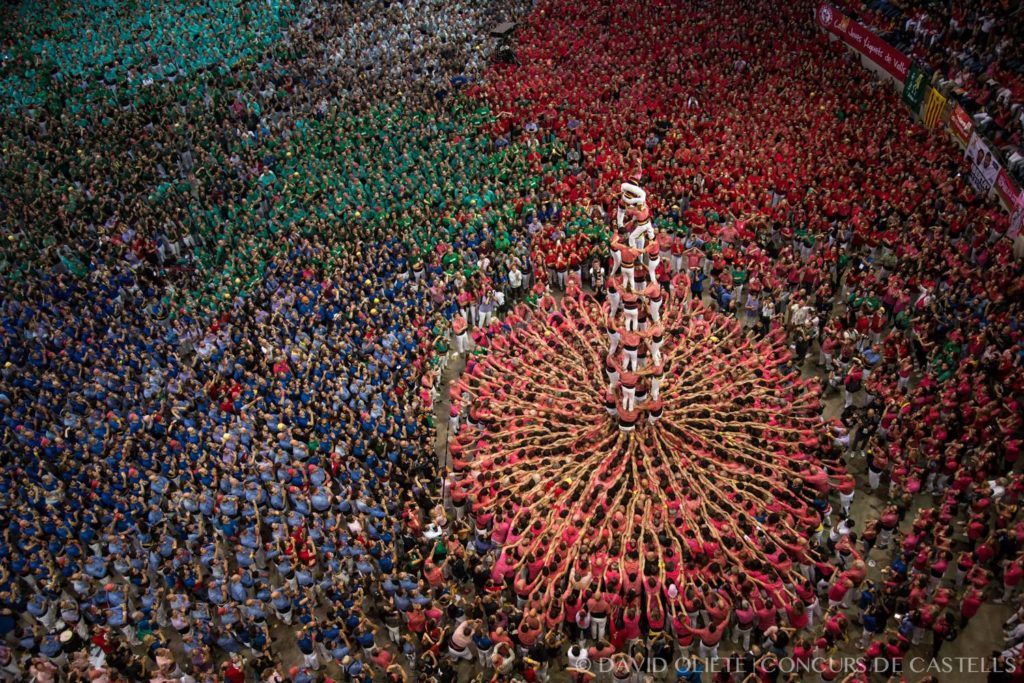 Your experience at Concurs de Castells

As a spectator at Concurs de Castells, you are completely captured by the performances, you want to look away in case someone falls but you just can’t stop watching. It’s hard to believe that people are able to stand that much weight and hold their balance for so long. The Human tower building process begins with the largest and strongest people on the bottom facing each other for stability. The tower is constructed by people carefully climbing up and standing on the shoulders of those below.

Right at the very top, you have the youngest and smallest participants, some are only 5 years old. It seems terrifying, doesn’t it? However, there are some safety precautions put in place to protect the people in the tower. Oh, and the floors of the arena are not padded, they are actually really hard. Participating in an event like this makes the contenders fearless. 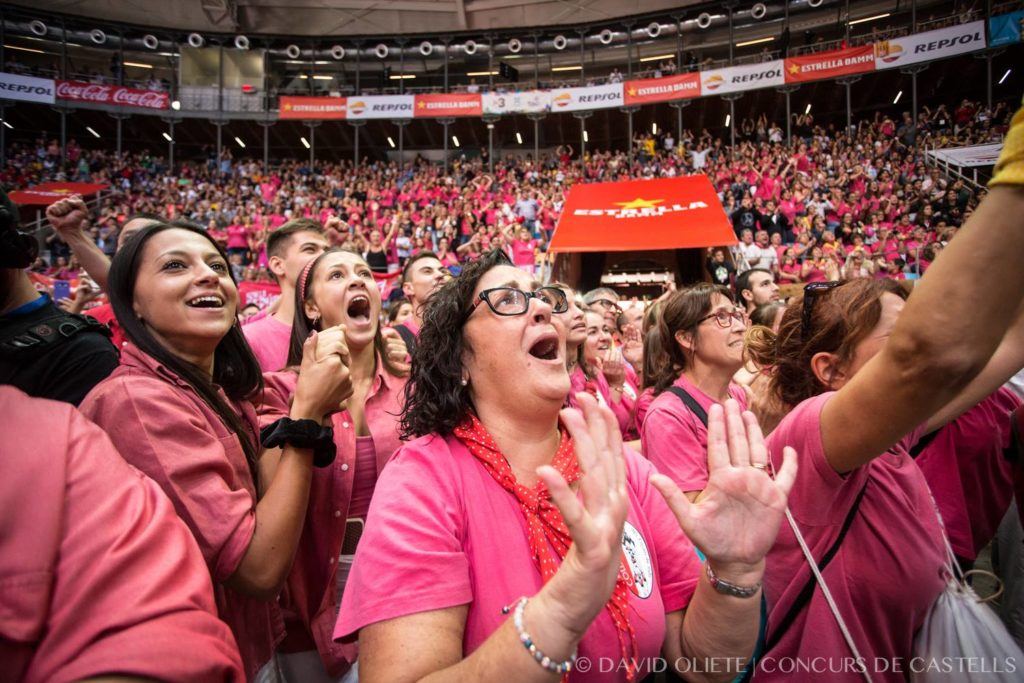 During the Concurs De Castells, the 32 teams each have a group of musicians that play the Toc de Castells song. Not only is the playing of this song a tradition, it actually enables the tower levels to understand how far into the construction the team is, whilst the 6000 spectators watch anxiously.

Once the smallest team member reaches the top they hold up and present 4 fingers to signify the Catalonian flag. The most difficult part of the process is the deconstruction of the human tower, this is the part when the team’s balance is well and truly tested.

On the day of Concurs, there will be live music, dance performances, local talent, and on some occasions, fireworks to celebrate the completion of the towers. 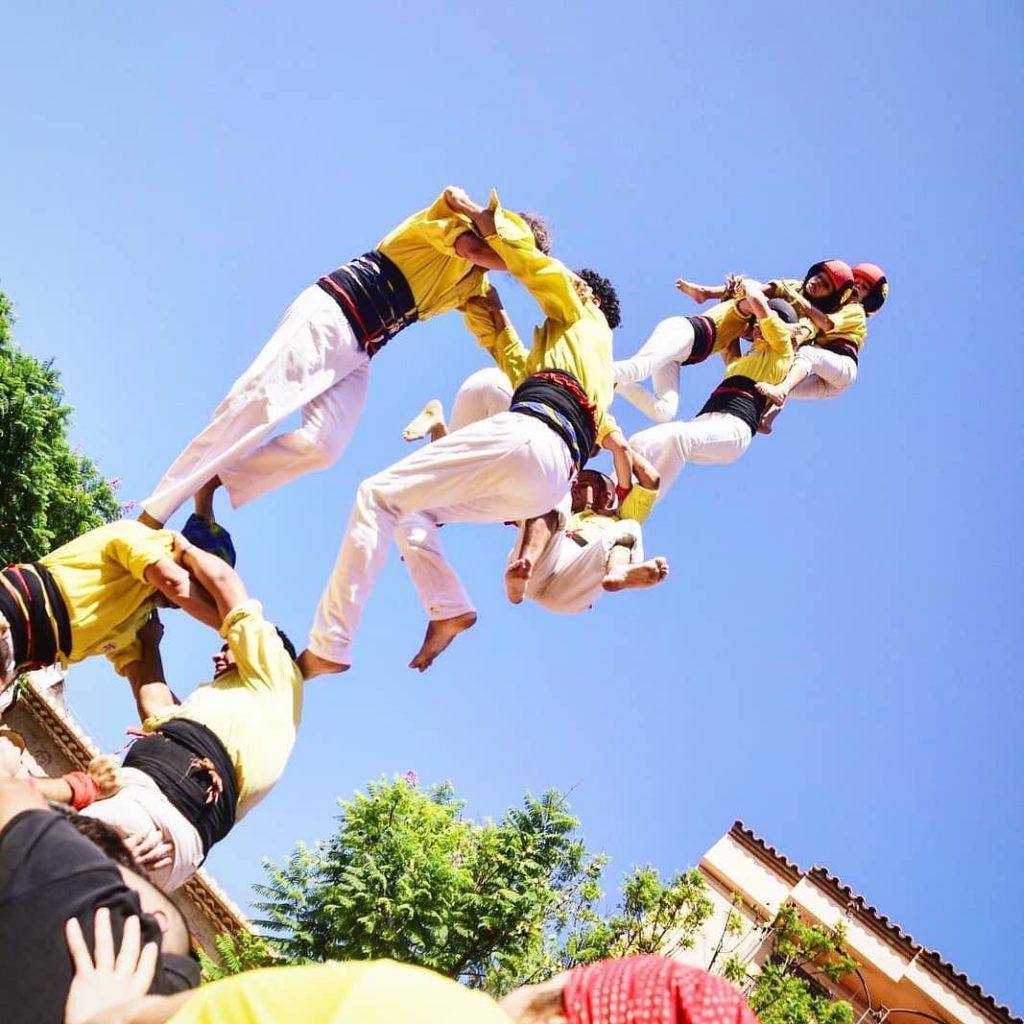 Concurs de Castells is a major tradition in Spain and has been an ongoing event since the late 18th century. A lot of hard work, perseverance, and strength have gotten the Castells festival to where it is today. 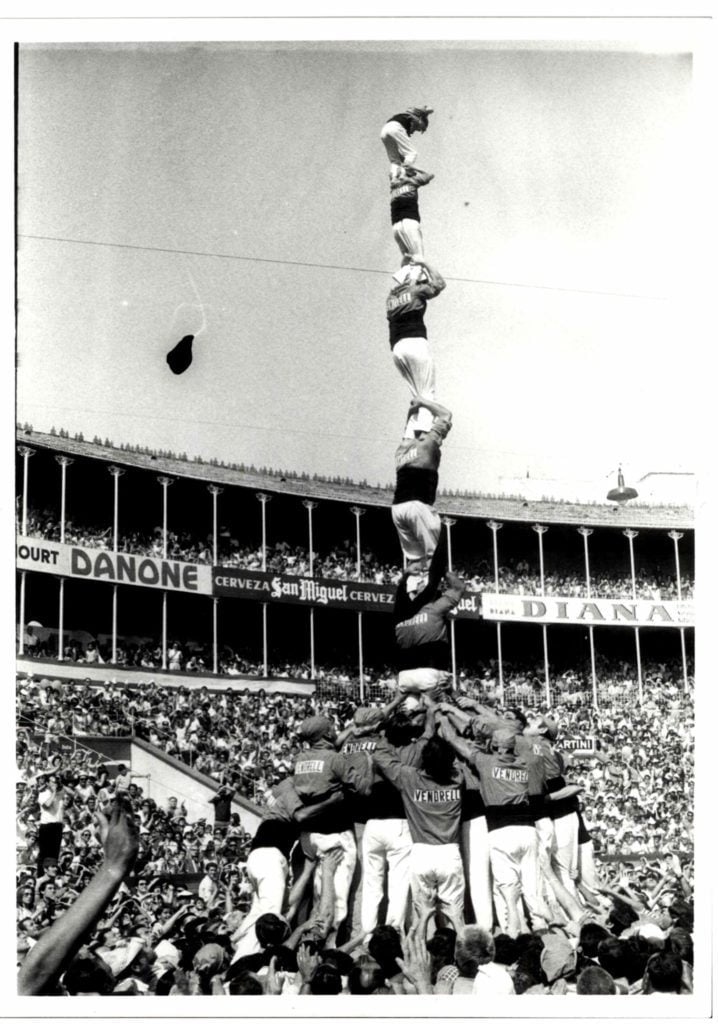 As this is a highly popular event in Spain, you will need to purchase tickets in order to watch the show. Tickets go on sale at the end of July, 2022.

The main event is held in Tarragona with a preliminary day in Torredembarra for the non-qualifiers. The closest airport to Tarragona is Barcelona’s El Prat Airport which is 73km away.

Traveling around Torredebarra and Tarragona is fairly easy as there are regular public transport services, several transfer companies, and a train station. 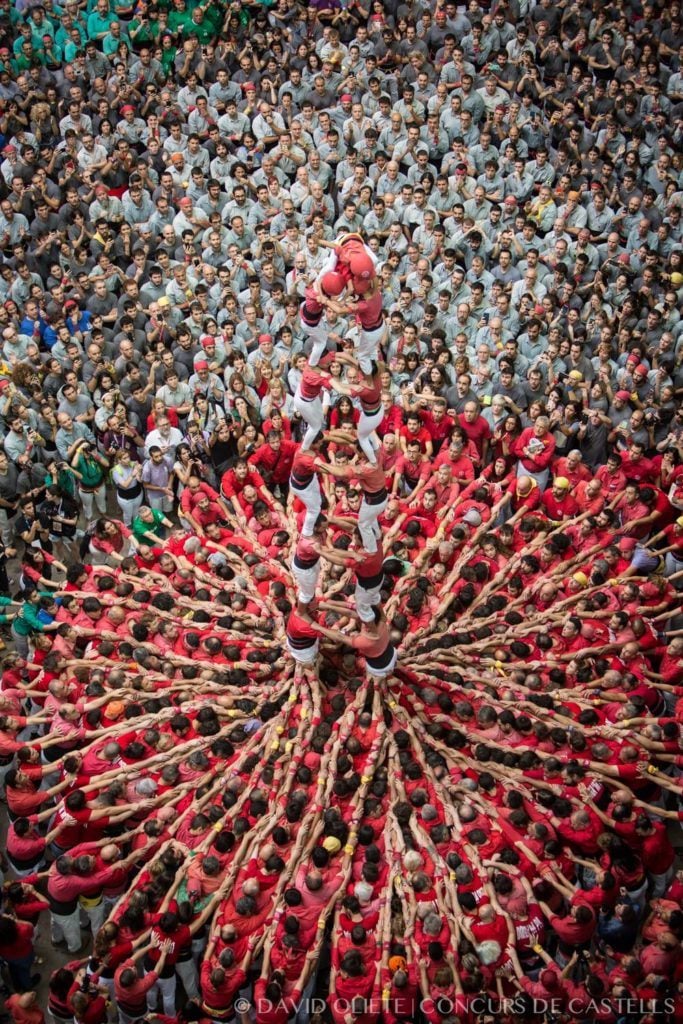 Where to stay in Tarragona

The charming city of Tarragona in Catalonia, Spain, offers a large selection of affordable accommodation. As it is situated on the coast there are beautiful hotels with sea-view rooms and plenty of self-catered apartments dotted around the city. Most of the hotels in Tarragona are 3 and 4 star hotels and have very high standards.  Accommodation prices range from $30 per night in Tarragona although prices may rise during the time of the festival.

Head to the map below for all the best hotels and apartments in the area. 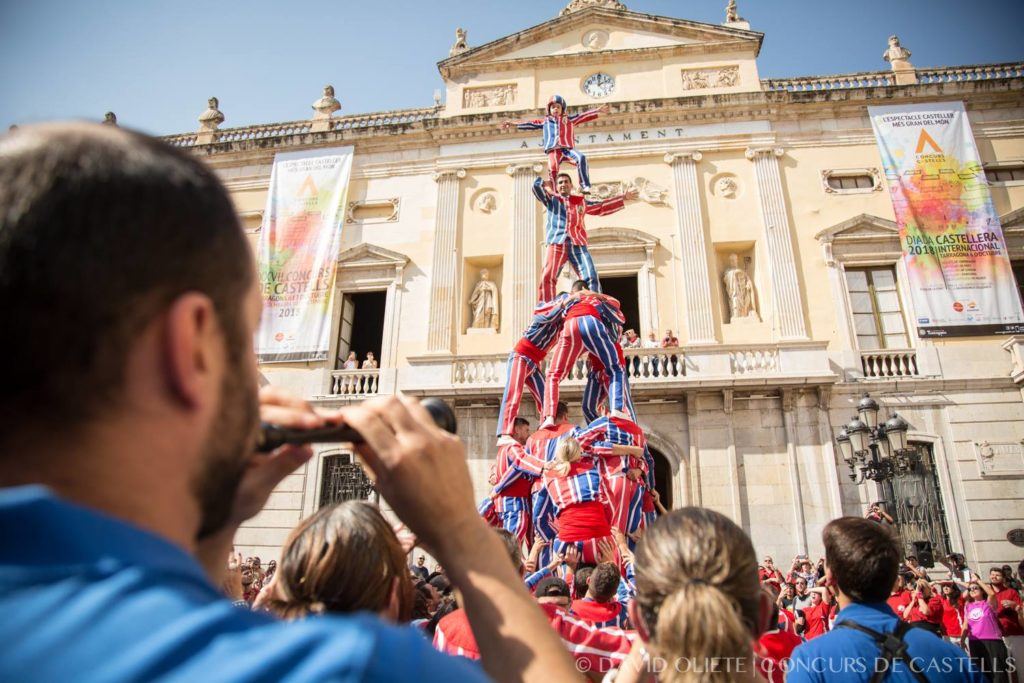 Things to do in Tarragona

Being on the coast, Tarragona provides many water sports activities such as snorkeling and scuba diving, along with water sports equipment hire and boat trips. A short distance from the beach lies the ancient Amfiteatre Roma. This spectacularly preserved amphitheater even has the ruins of a 6th-century church.

More ruins in Tarragona include that of Pretori i Circ Romans, which was once was the spot for chariot racing. For entertainment, Torredembara has its own escape room challenge where you can try and solve the clues to move through the course. Throughout both Torredembara and Tarragona, there are many characteristic bars and restaurants, some of which, provide live local music.

Tarragona and surrounding areas are riddled with historical sights and landmarks just waiting to be explored. Go-karting, beach days, and a jug of sangria, what more could you possibly want? 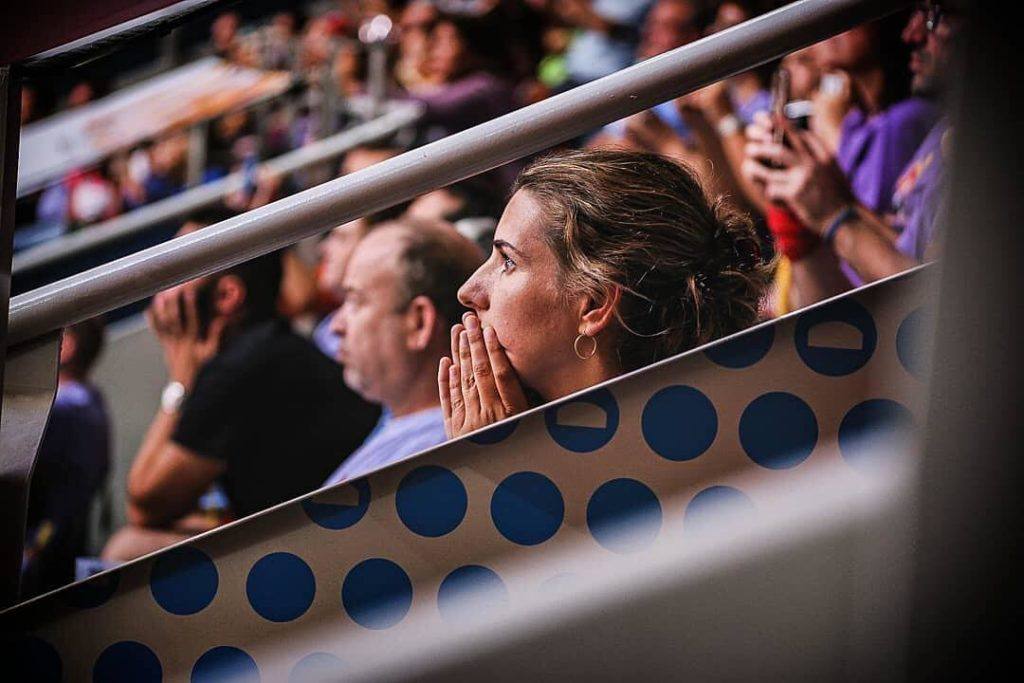 The next Concurs De Castells festival will take place on Saturday 1 and Sunday 2 of October 2022. The championships take place every second year and is always on even-numbered years. The Castellers still perform on odd-numbered years, however, this occurs at different festivals and venues.

Stay safe: Even the best-laid plans can head south. SafetyWing travel medical insurance can help you stay safe and cover you in unlikely situations as well as that epic road trip or on your next adventure. How to stay safe during Concurs de Castells 2022? If you’re not covered for your trip yet, get your quote here.

Rad Season is providing you with rentals and hotels at the lowest prices available online. Book your stay for Concurs de Castells 2022 using the map below!

Sign up for more news about Concurs de Castells 2022