Graham Jarvis, the Most Decorated Extreme Enduro Rider of All Time.

Graham Jarvis started competing in trial motorbike competitions when he was only 10 years old. He went on to win the Scottish Six Days Trial four times, the Scott Trial nine times and the British Trials Champion five times. When you look up Extreme Enduro Graham’s face pops up. He has won Red Bull Romaniacs an astonishing six times and Erzberg Rodeo five times among loads of other races.

We talk to Graham about his incredible career from Trials to Hard Enduro and will also be joined by Justin Serna, Executive Producer of SILENT ASSASSIN – The Graham Jarvis Story.

Tune in to the podcast to find out about Graham’s injury at the 2021 Red Bull Romaniacs while leading the race, his new movie project SILENT ASSASSIN and his return to racing in 2022. We’ll also be talking about what’s in store for Jarv1s Apparel, Jarvis Signature Tours and the Jarvis Racing Team.

Graham Jarvis: That’s it. The cool thing is it kind of brings different people in from different disciplines.

You’ve got the motocross guys who used to do motocross, they come in and start doing hard enduro. Normally older guys, but all the skills are there, the trials, the fast ride and variations. 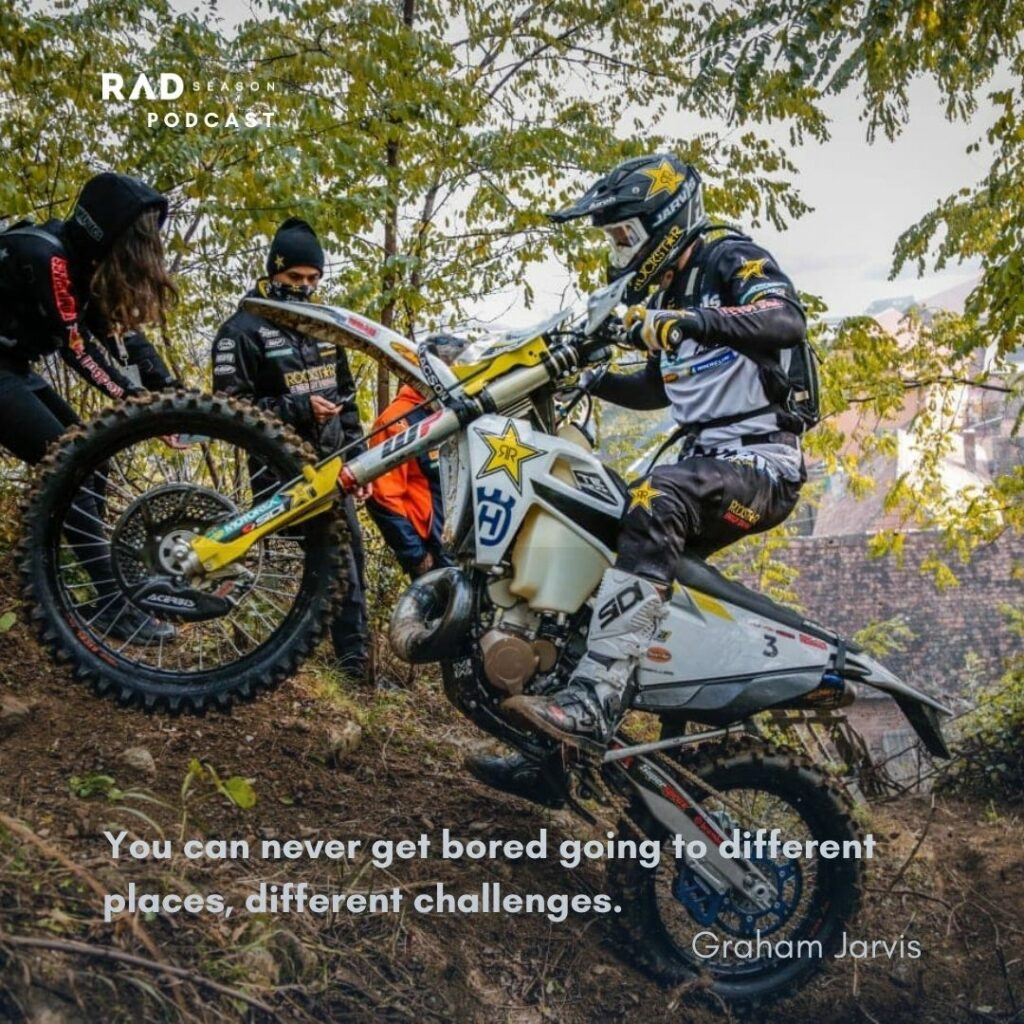 I think that’s the appealing thing about it. You can ride with friends and have fun as well, can’t you? It’s never anything too intense. Unless you’re racing of course.

Russell-Cowan: Riding for 35 years, would you say the appeal was always these big events and that rushing of being on the podium?

Graham Jarvis: There’s two aspects for me. You’ve got the winning, that’s the professional battle. Gotta be professional, it’s a jobs to win, I still enjoy racing.

The fun bit for me is just going different places, meeting new people, just challenging myself to ride in new terrain and seeing different countries. That’s the bit I really love.

Russell-Cowan: Doing the events you’d always be going back to the same place to race but would you look to go to different places when you had that time off?

Justin Serna: Is that one of the great things about the Graham Jarvis Signature Tours that you get to go to other places and ride?

Graham Jarvis: Yeah, so I am fortunate enough to go to a lot of places and people always give me a bike, but it’s not always that easy.

The idea of signature tours is to give everyone that opportunity to go different places and experience what I’ve experienced. 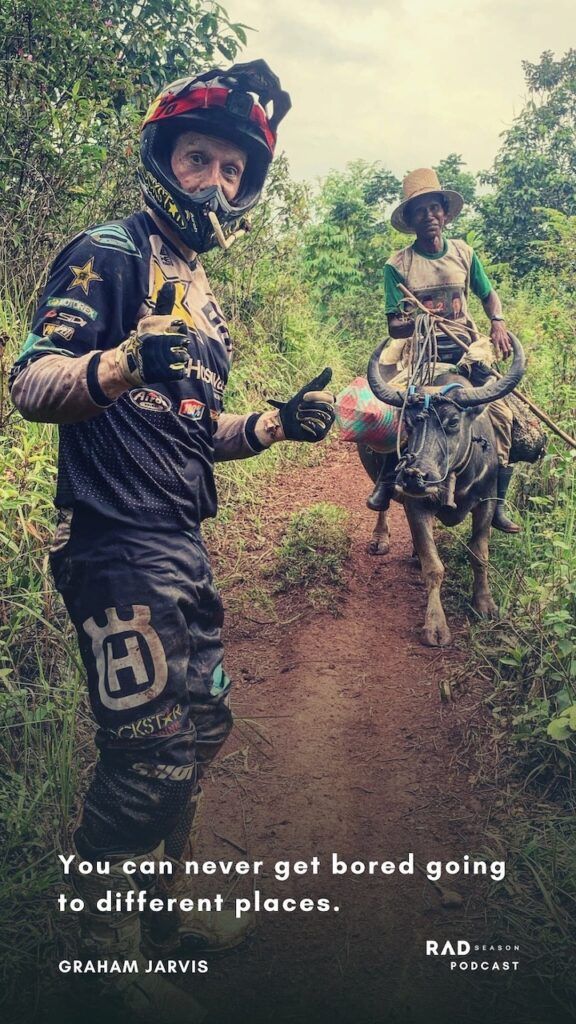 Russell-Cowan: Where did where did the Signature Tours start?

Graham Jarvis: It started here in Malaga. I’ve got a base here where I can train. Good weather in the winter, good trails. Then I just thought, can we expand this and move it to different places. Places that I’ve been and know are our cool places to ride.

Graham Jarvis: Yeah, exactly. You experience the country. You often see the real country rather than just a tourist destination, which is what I like. You see real people, the real country in random places.

The more random, the better for me.

Russell-Cowan: There are some pretty random ones. It goes from rainy Wales to Panama and Chile. it’s a bit of a contrast.

Graham Jarvis: The latest one Nepal. The guys just said, we’re in Nepal we’ve got bikes do you want to come here? So we booked a flight. And we’re in Nepal a new place an incredible place. Good experience. It kind of goes like that.

Russell-Cowan: How was riding over there?

It’s literally up mountains to 4,500 metres.  Obviously freedom that’s the key to these places when we are restricted a lot in Europe. So just to go a place with freedom to ride and the people are so friendly and it’s just a cool experience.

Getting Injured at Red Bull Romaniacs

Oli Russell-Cowan: Last year you injured your knee during a race what happened?

Graham Jarvis: Second day in Romania. I was leading but was already tired to be honest. Might be part of it. But I was pushing as hard as I could probably a bit too much riding with Manny leading. 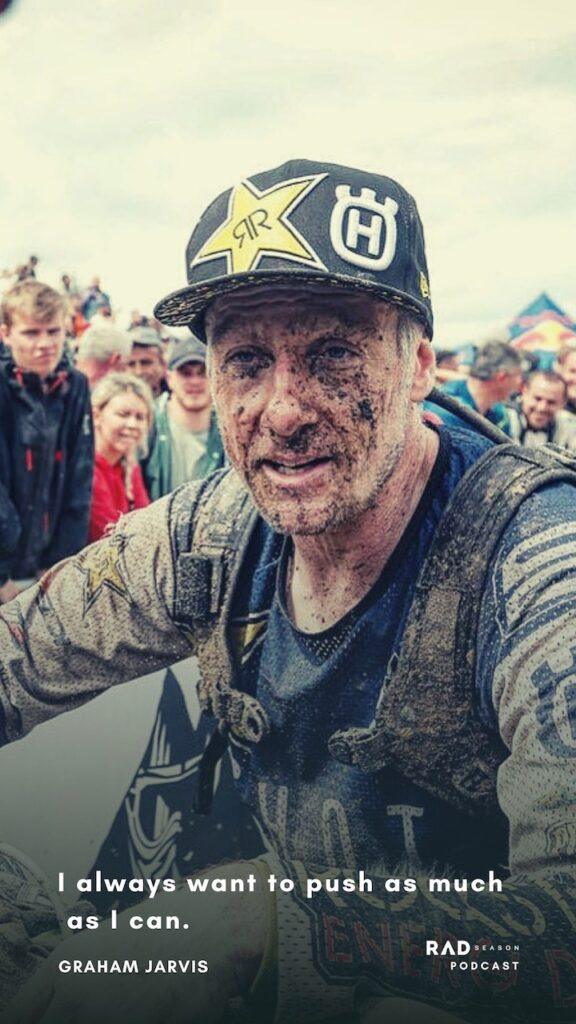 It’s towards the end and it was obviously a little bit unlucky. I just hit a rut and stuck my foot out. Caught it wrong, had a lot of pressure on the knee and it kind of just twisted. Not too much I had knee braces on probably saved it a little bit but the cruciate ligament had broken.

So it’s six months to repair it. Luckily, I went straight into surgery and we’re now at six months. It’s at 90%. It’s a little bit hard getting that last 10% back fully but I’ve got a few months to the next race in Israel.

Oli Russell-Cowan: What did you do during the downtime?

Graham Jarvis: I’ve got plenty to do so I was never bored. That was a good thing. Getting organised with race gear, the tours and the website working on that. Lots of new projects. My mind had been working overtime. 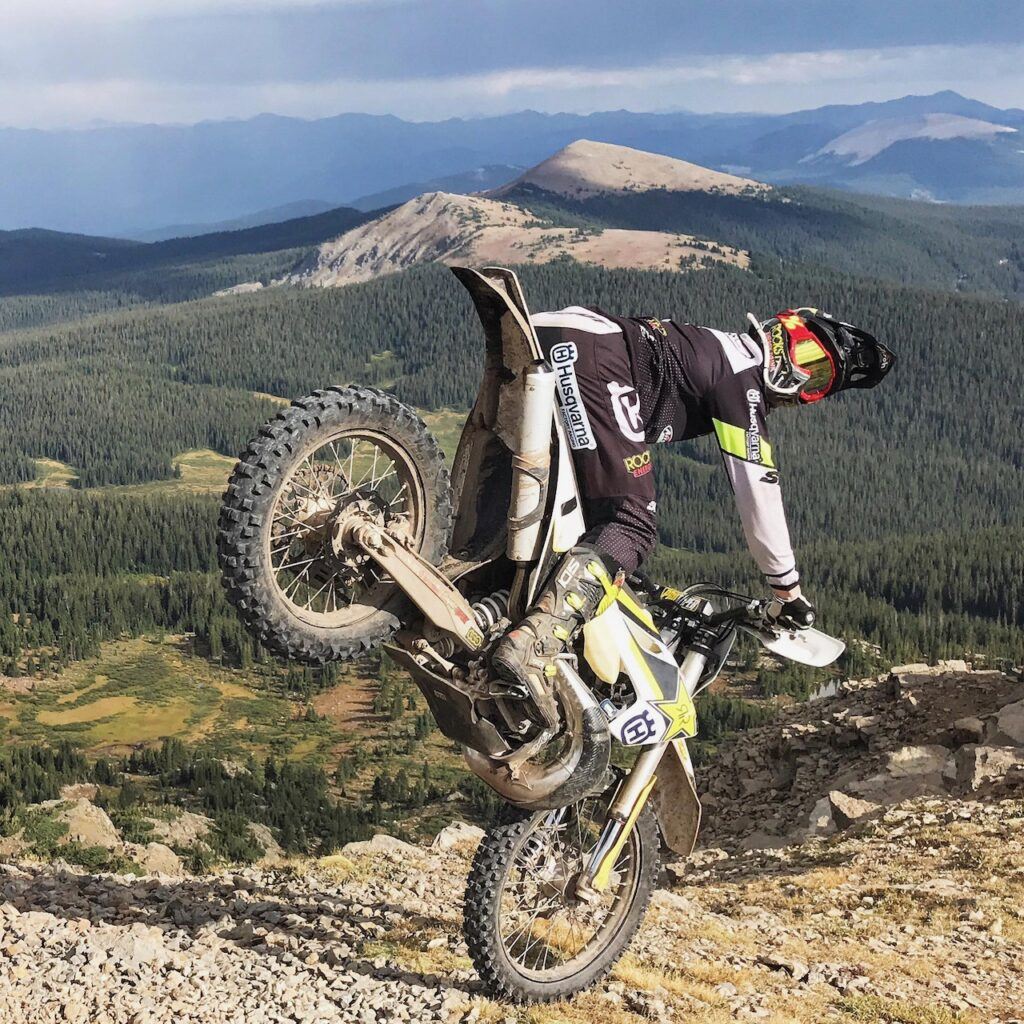 Russell-Cowan:  Were these plans before you had the injury?

Graham Jarvis: Yeah, so I’d already set up the tours and the race gear which gave me a bit of time to put more into that.

Then the online training is the other one as well. So that one has been a project for a while. The training days in this day and age to give it to people online, accessible, they can learn new skills from the basics to advanced pro level.

I thought it was something you can carry on because you’ve got the basic techniques, but there’s so many variations in hard enduro. Different situations, adapting the techniques. Perhaps mix it up a bit behind the scenes with preparation, nutrition, fitness.

Rad Season is providing you with rentals and hotels at the lowest prices available online. Book your stay near Malaga, Spain using the map below!