Björn Dunkerbeck’s parents fell in love with windsurfing in Denmark. They decided to move to Gran Canaria when Björn was 8 and opened the Dunkerbeck Windsurf Center where he learnt. His mother competed and was 2nd in the world in windsurfing in the late 70’s. His father was a Spanish speed sailing champion in the mid 80’s and they both still windsurf today.

Björn started competing in windsurfing at 12 years. He was 2nd in the junior world championships in the under 18 category when he was only 15. He was rising rapidly into the world ranking and competing with the best. At 18 he was 2nd in the world just behind Robbie Naish. Then from 19 he was first from 1988 until 1999 winning the overall world championships 12 times in a row along with 30 different discipline titles. He was unbeatable during that period. In a career expanding 30 years he won 42 world windsurfing championship titles.

With so many different variations of water sports from SUP, foil, wind sailing, surfing Björn never gets bored. In 2021 he broke the 100km/h barrier on a windsurf board in Luderitz, Namibia with an incredible speed of 103.67kph.

Oli Russell-Cowan: You moved over to Gran Canaria at 8 years old when your parents decided to go over there.

Björn Dunkerbeck: My parents fell in love with windsurfing in Denmark in 76. They moved to Gran Canaria  and opened the Windsurf Center in April of 78. Shortly after I learned at a small lake in Maspalomas, in the south of the island of Gran Canaria.

Russell-Cowan: Did they try and get you windsurfing over in Denmark?

Dunkerbeck: In Denmark I lay on the back of the board, but I never actually went by myself. I was too young and the rigs were too heavy at that time. Shortly after we came to the Canary Islands, we had smaller sails for kids and then I was pretty rapidly on the board as well.

The first Dunkerbeck Windsurf Center in Grand Canaria was open in 78. It’s still running. It’s on a different beach now. We had up to 3 centres running at the same time. Now we’re back to two. Surfing, bodyboarding standup paddling, windsurfing, wakeboarding,  windfoiling. Everything that has to do with fun on the water.

Russell-Cowan: Both your parents were competing and racing?

Dunkerbeck: My mother was actually second and third in the worlds in 79, 80 and 81. My father was a Spanish speed sailing champion in the mid-80s. And they’re still windsurfing. 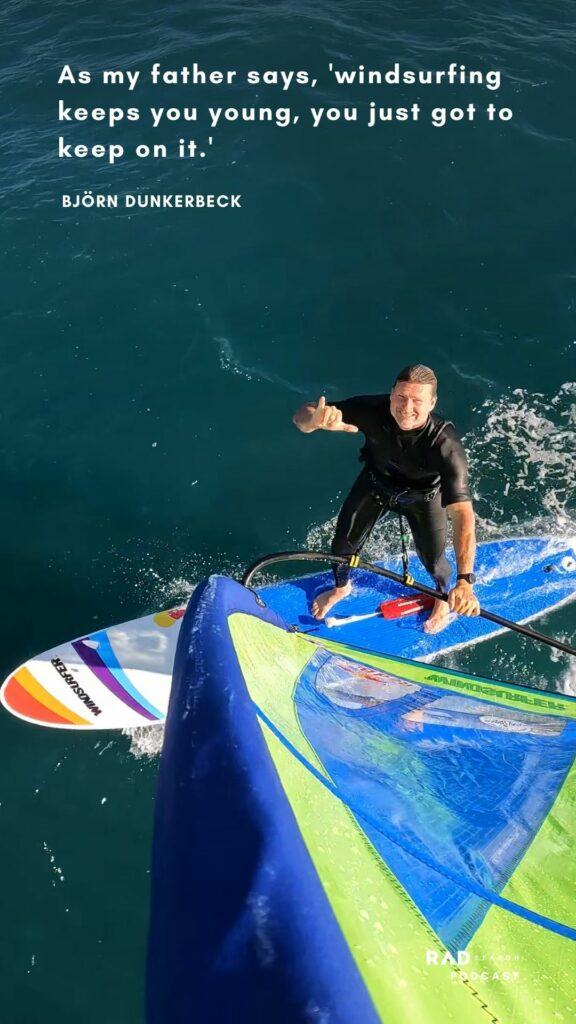 Russell-Cowan: Is he going out every day like you?

Dunkerbeck: Not every day but very often still.

Russell-Cowan: You started competing around 12, right?

Dunkerbeck: I started competing here in Gran Canaria. Yeah, around that time. Then Spain and in Europe 13, 14 at my first professional competitions. I was actually second in the junior worlds at 15 in the under 18 category.

I was very young and rapidly up in the world class. 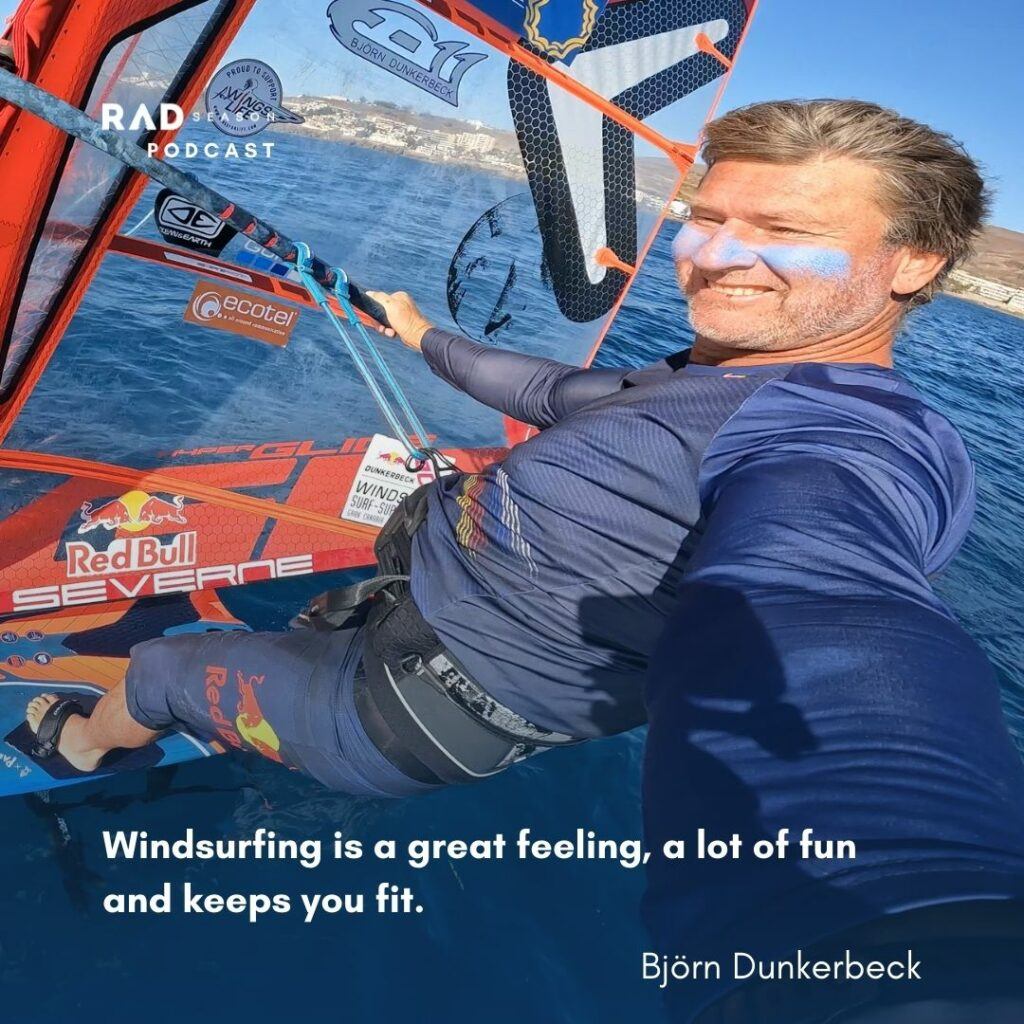 Russell-Cowan: Looking back was there this kind of drive to win when you were a kid or did you just want to have fun?

Dunkerbeck: When you’re a kid everything is fun, you know, and obviously, I was trying to win my categories. In the open category you have no chance as a kid. But I grew up pretty rapidly. At 16 I was doing an entire world tour at the time and came 7th the first year. At 18 I was second just behind Robby Naish.

At 19 I was then first from 1988 to 99. I won 12 times in a row the overall championships and 30 different discipline titles in this period. I was pretty much unbeatable. 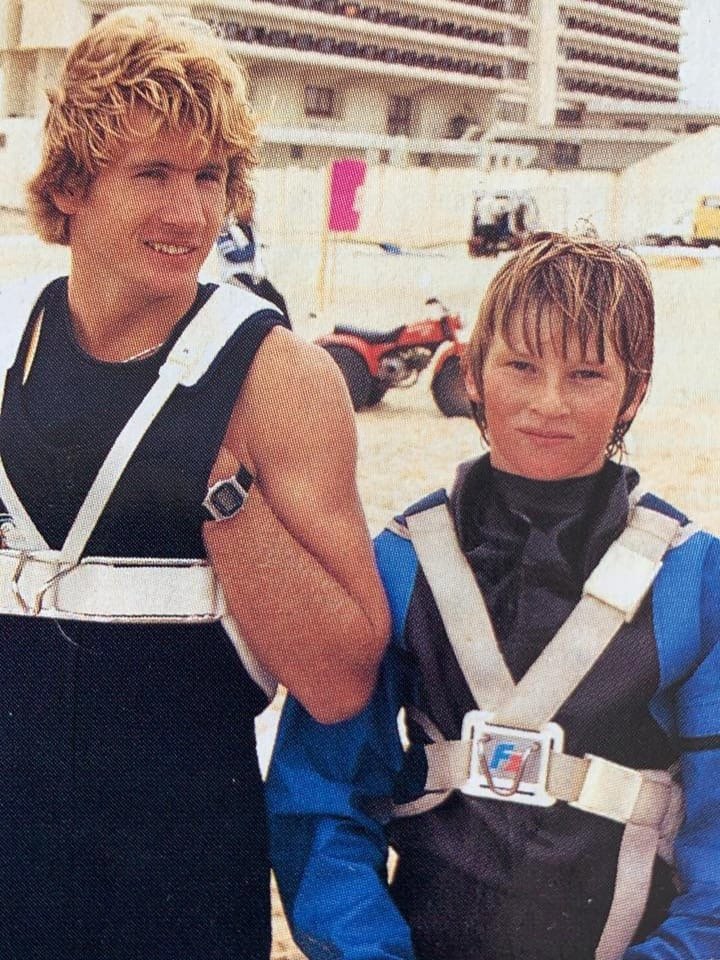 Russell-Cowan: Who did you look up to when you started competing?

Dunkerbeck: The top guys, especially Robby Naish. He was much older me in the beginning. Then we were really hard competitors for many, many years. In last 10 years or so we’ve become friends as well.

Russell-Cowan: Was there rivalry would you say with these guys right from the beginning?

Dunkerbeck: No one likes being the best and then the kids comes and beats you. I didn’t like it either and Robby Naish was never a good loser. No one likes losing.

Russell-Cowan: Keeping it at that level for so long would you say that kept the drive going?

Dunkerbeck: In wave sailing I had many opponents, especially in the beginning it was definitely Robby Naish. In other disciplines, I had a lot of other opponents like Anders Bringdal for a very long time, mostly second very often. Then the later years we had a lot of different other competitors.

I was doing the whole world circuit for 30 years. So there’s been many that came and went and new ones grew up.

Rad Season is providing you with rentals and hotels at the lowest prices available online. Book your stay near Dunkerbeck Windsurfing Center using the map below!