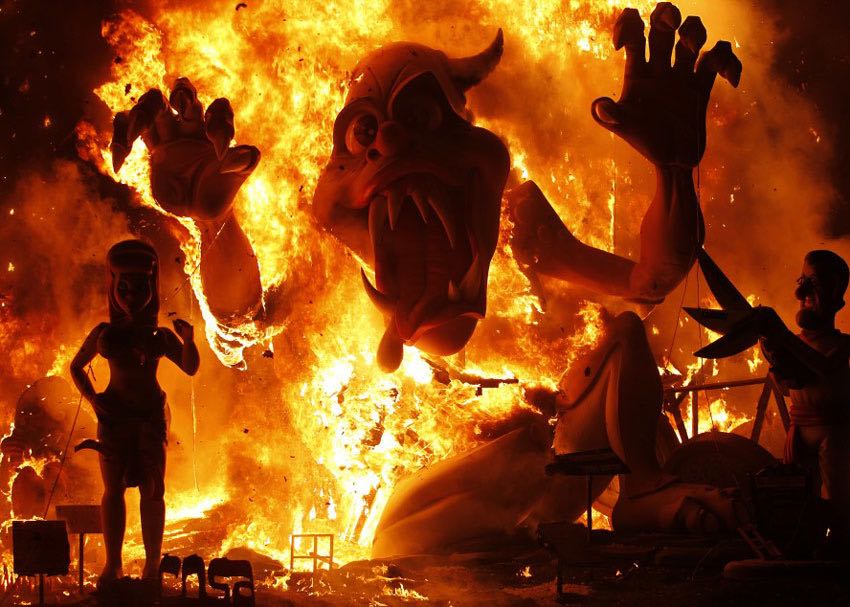 From Food Fights to Bull Runs, here are the Craziest Spanish Festivals

Whether it’s celebrating the founding of a town, the martyrdom of a saint, or a tomatoes funeral, every town, city and region in Spain has its own unique fiesta, meaning on any given day there’s probably a party somewhere in Spain. These Spanish festivals, ranging from somber to downright outrageous, each have a quirky history behind them, often as bizarre as the festival itself. While religion is often a large part of the back story (the Roman Catholic Church recognizes 33 patron saints in Catalonia alone), delving deeper into the past can help reveal why Spanish Festivals are some of the craziest festivals on Earth.

One of the best known festivals in Spain, this hour long food fight in the town of Buñol has attracted hundreds of thousand of tourists over the years to pelt each other with tomatoes. La Tomatina has a rocky start, with the first instance of a tomato being thrown dating back to 1945, when a participant in a different festival was accidentally pushed off a float and had a temper tantrum, lashing out at everything in range. A vegetable stall bore the brunt of his rage, with him and the crowd pelting each other with the tomatoes. What could have been an isolated incident escalated the following year with some teenagers bringing their own tomatoes to continue the fun.

‘Over the next few years, police banned the tomato throwing to limited success, with many people choosing arrest over missing out.’

After over a decade of to-and-froing between the police and public, the final nail in the coffin was an actual coffin, in protest against the ban, townsfolk held a funeral for a tomato, complete with a funeral procession, marching bands, and a coffin with a giant tomato. Hilariously, this worked with great effect and ever since then, La Tomatina has been an annual event in Buñol.

While some festivals have older and prouder traditions involving long dead heros, there’s something about a festival being born of one bloke throwing a toddler’s fit that makes this already awesome Spanish festival even better.

San Fermín, Running of the Bulls 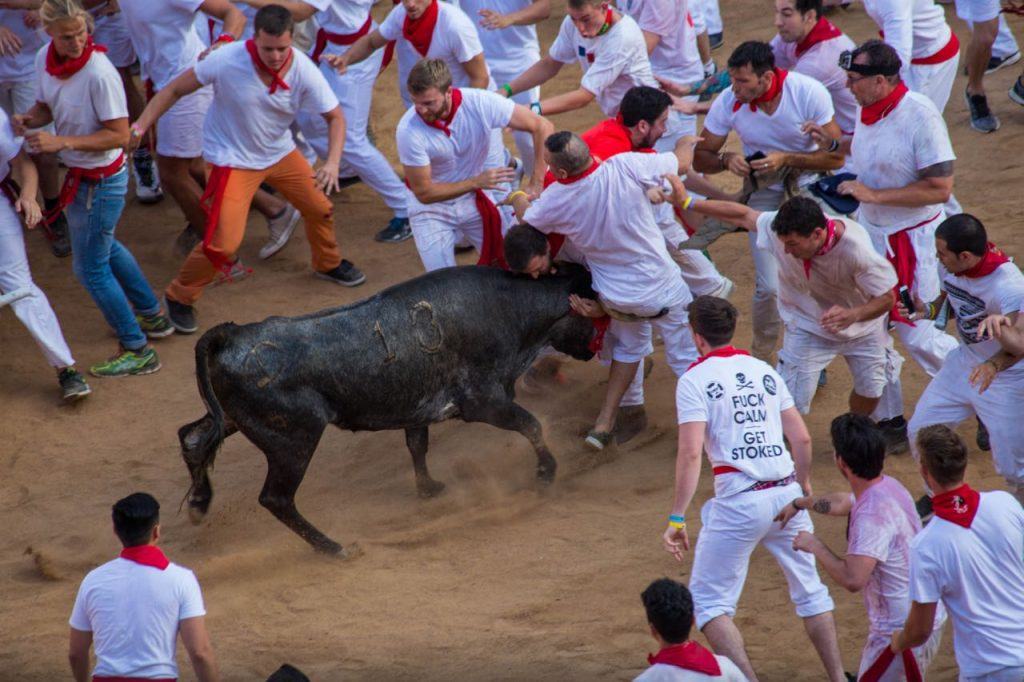 Found on every adrenaline junkies bucket list, San Fermín festival is best known for one of its highlight events- the running of the bulls. Over a million people attend the festival annually for their chance to dance with death through the streets of Pamplona, all to honour the co-patron saint of the area, Saint Fermín.

While it is often said that Saint Fermín was killed by being dragged through the streets with angry bulls chasing after him, hence the running of the bulls, it was in fact the bishop who baptised Fermín, Saturninus, who suffered this fate and managed to draw the short straw of not even getting a festival named after him. The bull running actually developed as a seasonal festival to mark the start of summer as historically, that is when the cowherds would bring their cattle into town to sell their wares.

‘Logically, the showing of prize bulls developed into having said bulls chase their potential buyers through the streets – as you do.’

If modern sales people still subscribed to this chain of thought, buying a car would be a much more interesting ordeal! While the religious celebrations of Fermín’s death were originally held closer to the date of his death in September, the weather isn’t so flash in Spain that time of year so the celebration was moved in 1591 to coincide with the running of the bulls as the Spanish found the summer a much better time for partying commemoration.

Nowadays the religious aspect has somewhat declined and ever since the documented arrival of foreigners at the festival in the 17th century, there has been a documented increase in the consumption of alcohol – what a coincidence! So in actual fact, Saint Fermín seems to have very little to do with the festival anymore, except the naming rights, but that does nothing to stop the music, fireworks, parades, or the tradition of being chased through the streets by a tonne of steaks. 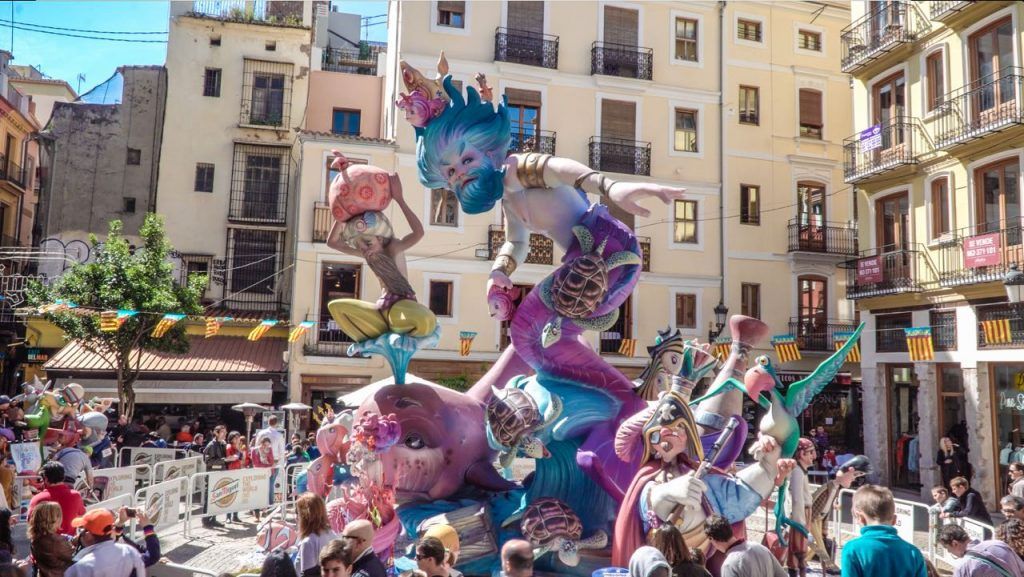 Held in the beautiful city of Valencia, Las Fallas goes the way you’d expect any festival commemorating Jesus’ dad to play out – by burning shit to the ground! Like Jesus however, this festival is believed to come from a humble carpenters beginning.

The story goes that carpenters and other artisans used to work by candle light during the dark winter nights and they would hang their candles on spare bits of wood called parots. Upon the return of spring, these parots would be ceremoniously burned as they were no longer needed and eventually, the burning of the parots was moved to coincide with the celebration festival of Saint Joseph, the patron saint of carpenters. Now this seems like too logical a progression from what we have seen of the Spanish festivals so far, until you look at what the parots have evolved to today. At a certain point people began to add clothes to their parots, and then trying to make them resemble prominent figures – perhaps Jim next door has been a bit of a dick, now’s the time for your revenge.

‘The gradual progression has now led to the parots being up to thirty meters tall and often very realistic, albeit offensive, caricatures of politicians, celebrities and other public figures.’

These giant flammable statues, now called ninots, can take months to begin and are commonly packed with enough fireworks to get Kim Jong Un frothing. After several days of street parties, music, and a never ending fireworks display, the effigies are ceremoniously burned at midnight in a fireman’s worst nightmare while the rest of the city parties on around them.

From a temper tantrum gone out of hand, to burning wood scraps, the Spanish festivals have varied and intriguing histories. San Fermín’s festival goes to show how much the celebrations can evolve to the point where they have almost nothing to do with the original reason, La Tomatina shows us how such a small incident can have such a lasting effect and Las Fallas shows us how progression over time can escalate an idea.

All together, the real reason why Spanish festivals are the craziest seems to be that the Spanish just love a party at any excuse!

Having a long and proud tradition of fiestas gives them the mentality and infrastructure to support this passion, as well as a rather lax attitude towards health and safety. Whatever the reason, Spain provides some of the most bizarre and entertaining events on the planet which can provide enriching experiences for all visitors.

Angus was born on the remote Isle of Muck off the west coast of Scotland and grew up in the South Island of New Zealand. After utilizing his film degree, marketing in New Zealand, Angus ran away to Europe and joined the circus (Stoke Travel) as part of their creative content team. Having been on the sea since before he could walk, Angus has a passion for the all things wet, fishing, sailing, surfing and snowboarding, as well as the occasion landlubber adventure on a skateboard. This of course, means he fits in perfectly with Stoke, as he makes his way across all the surf camps, sunburnt destinations and sangria-soaked festivals Stoke has on offer.