Beyond Pizza: 6 of The Craziest Italian Festivals 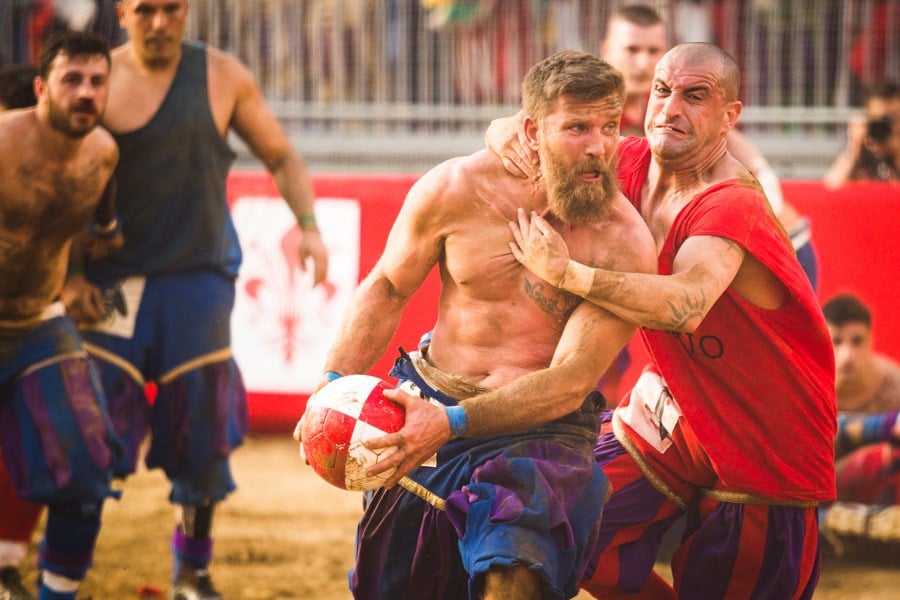 So what and where are the craziest Italian festivals

Italy is pretty famous for its incredible historical heritage. From Pompei Ruins in Naples to Leonardo’s frescos in Milan, the peninsula is filled with Roman ruins and architectural beauties. What most tourists don’t know though, is that history is still part of Italian day to day life. Historical festivals and re-enactments have a huge following in Italy. Some of the most popular, like the Venice Carnival, even attract tourists from all over the world. But Pizzaland also hides some crazy gems in terms of traditional festivals. This is a list of the craziest Italian festivals: curious travellers hold tight, blood will be shed!

1. Fruity extravaganza: The Battle of the Oranges 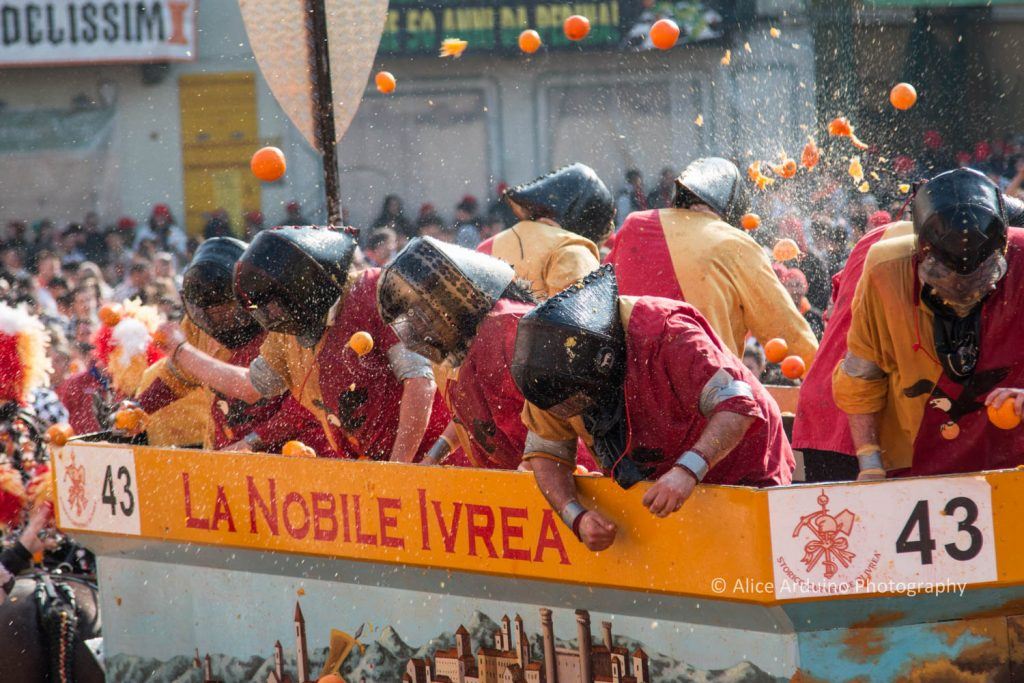 The Carnevale di Ivrea, also known as the “Battle of the Oranges” is a historical re-enactment of the uprising against the Marquis of Monferrato. A tyrant that starved the city in the 13th century. The legend has it that the heroic Violetta, the daughter of a miller, rebelled at the ius primae noctis imposed by the baron and killed him with his own sword. This started a popular uprising that has been recalled ever since as The Battle of Oranges.

Nowadays, the carnival involves thousands of townspeople, divided into nine combat teams, who throw –violently! – oranges at each other. Last February,  700 tons of oranges were thrown in this historical re-enactment that involved more than 100 historical characters and musicians. 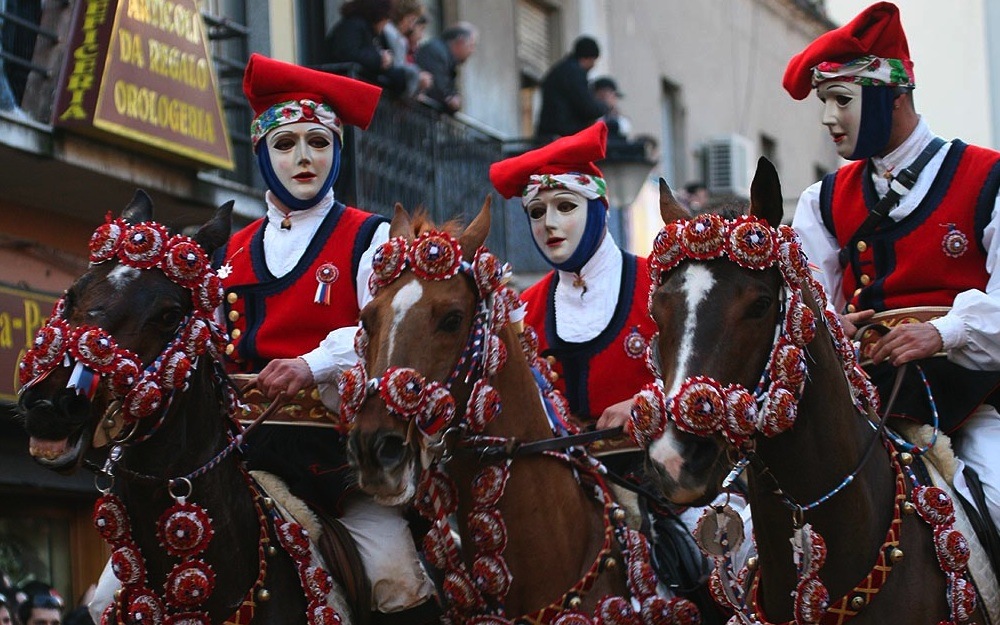 An exception in the otherwise fully religious scene of Sardinian historical events, the Cavalcata Sarda, or Sardinian Horse Race, is a secular event that takes place the second to last Sunday of May in Sassari. It is an ancient folklore event that sees the parade of hundreds of people dressed in traditional Sardinian costumes.

The parade is made on horseback or on traditional chariots (traccas) decorated with flowers and objects from everyday life. Groups from all over Sardinia participates wearing their distinctive costumes, often enriched by sophisticated embroidery and jewellery. It’s a two-day event, proof of the Sardinian’s pride in their history, culture, and island. 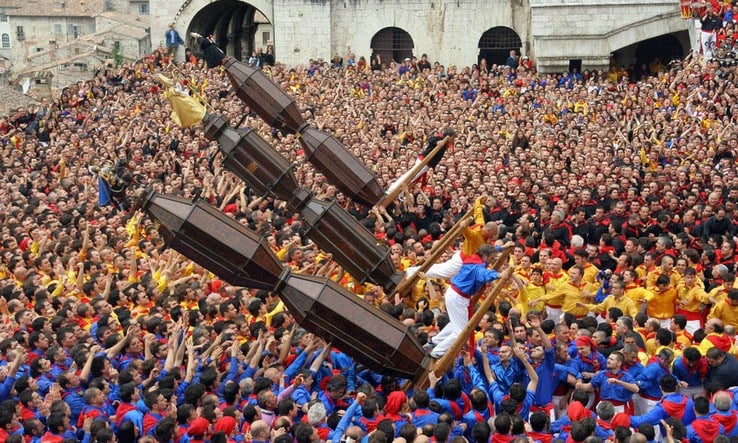 Gubbio is a lovely historical town tucked into the green hills of Umbria. Besides tasty food and strong wine, the town also hosts one of the oldest Italian folklore events, the Festa dei Ceri. The ceri (candles) are actually three huge wooden pillars with a statue of the St. Ubaldo on top.

Three teams race through town, each one holding a statue that weighs more than 300kg, all the way up Mount Ingino where the Basilica of St. Ubaldo stands. Not a fast race but definitely one worth a visit! This tradition has been going every 15th of May since 1160.

4. Transforming a square into a racecourse: the Palio di Siena 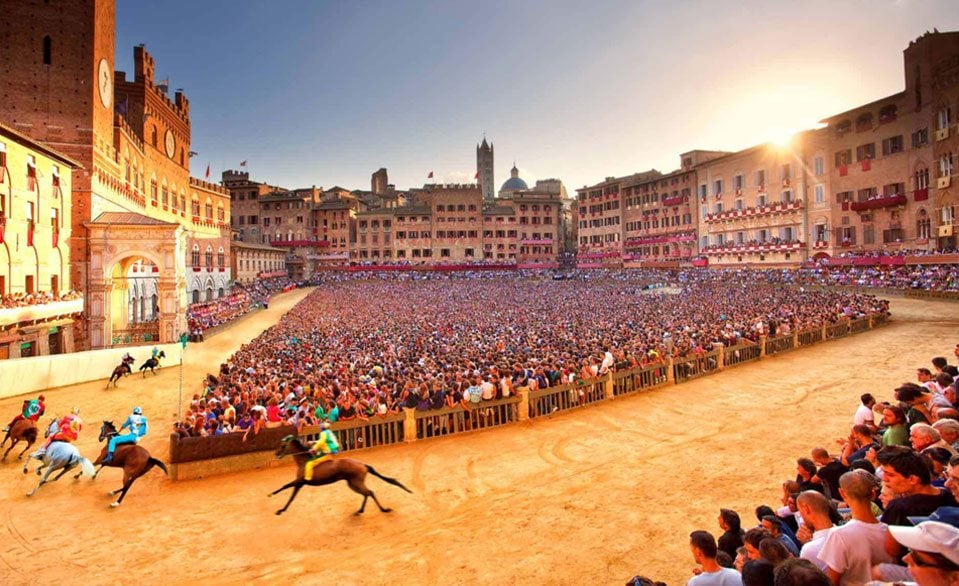 The horse race is held around the central Piazza del Campo, which is covered in dirt for the occasion. Once the horses are in place (a procedure that can take up to one hour!) it all goes very fast: only three -usually messy- laps of the Piazza, and the winning contrada can brag for the entire year! Don’t miss the celebrations in the winning neighbourhood after the race.

5. Beating the hell out of your opponents while playing Calcio Fiorentino

As everyone knows, football is a huge national passion in Italy. It’s origins date back to medieval times when it was played in its early form in Santa Croce square in Florence.

Back in the days, football was way more violent and messy. You could basically use any mean to score a point, even throwing punches and kicks! After a long period of oblivion, Calcio Storico got back in fashion in the 30’s and is now played every June in Florence, in all its brutal glory.

6. Getting literally bloody naked in the streets: meet Calabria’s Battenti 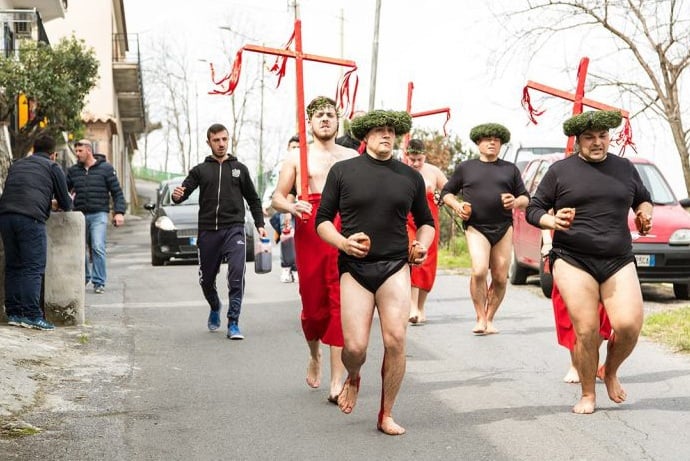 This one is not for the light-hearted. The rite of the battenti (the beaters) is a religious event held in Calabria, in the deep south of Italy. During the Holy Week, the “faithful penitents” enact a ritual procession where they repeatedly and rhythmically hit their legs with the “thistle,” a cork disc layered with glass splinters. The rite, which dates back to 15th century, has a controversial history.

In the past, it was formally condemned by the Vatican and was even forbidden by law. In 1997 though, the ceremony came back in fashion. With their heads wrapped in a black cloth, the battenti cross the towns of Nocera Terinese and Verbicaro covered in blood. All the while, bystanders pour wine on their wounds as a so-called disinfectant. The bloody procession ends at the feet of the statue of the Virgin Mary. The rite was traditionally performed by those who wanted to say grace and is now passed down from fathers to sons. Extremely archaic, extremely gore: think twice before googling it.