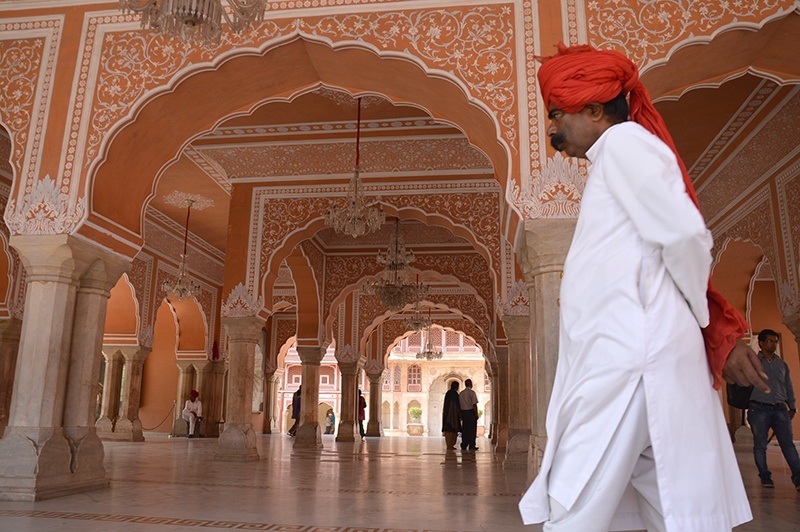 What to do and where to go in Rajasthan India

Rajasthan is a vast state in Northern India characterized by a plethora of historical cities scattered around an unforgiving expanse of red dust. Short-term travellers often get overwhelmed by the abundance of sightseeing opportunity and big distances between points of interest. What to see in Rajasthan is a commonly asked question, but fear not, we got you covered! Here’s a five stops itinerary that includes the best tips for your fortnight Indian backpacking adventure!

To visit Rajasthan, the closest international airport is the Indira Gandhi Airport in Delhi. For those who visit for the first time, the capital city is not really the smoothest place to get accustomed to bustling India.

The crowds, the mess, the traffic can all be a little too much for newbies. So go to the nearest bus travel agency for backpackers and locals (you will find many in Paharganj where most of the cheapest hostels are) and book a bus to Jaipur! It will take 6 to 7 hours, which is roughly the same time that it will take a train ride, the latter option being way more complicated to organize. 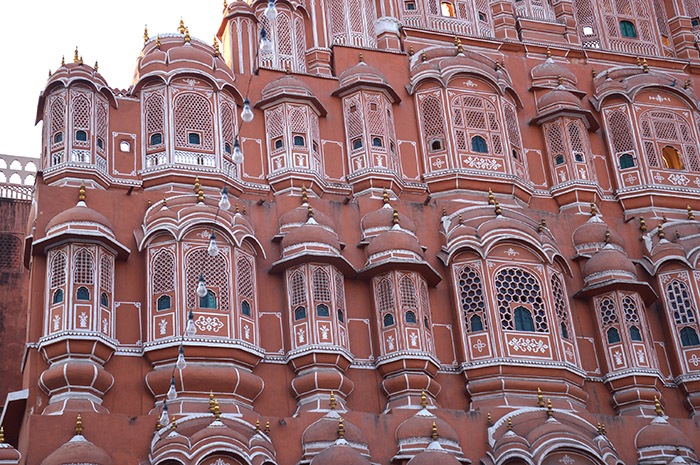 Jaipur, aka the pink city, is famous for its historical centre with traditional Rajasthan architecture in pink shades. Nowadays the pink looks more like a faded salmon, but the palaces are still stunning. The most famous sight is the honeycombed Palace of Winds (Hawa Mahal) with its iconic façade of thousands of miniature windows.

Slightly more out of the beaten track is the Royal Gaitor. A beautiful complex of domed cenotaphs that fully embodies the elegance of traditional Rajasthani architecture minus the crowds. You can get here with a short tuk-tuk ride and also pay an entrance fee as low as 30 rupees (0,50 dollars). With an hour bus ride from the centre of Jaipur you will get to the gorgeous Amber Fort complex. A massive palace built on a hilltop, made of white marble and pale yellow and pink sandstone. The great number of stairs will bring you from one wonderfully decorate area to the other keeping you fit at the same time!

And now for the eating part: one of the best restaurant I found in Rajasthan is here in Jaipur. That’s the Peacock Restaurant, the terrace dining area of the Hotel Pearl Palace. Here you can have a great selection of Northern India Cuisine on a beautiful majolica terrace filled with plants. The dining is usually accompanied by some live Rajasthani players (and I swear it’s not a cheesy tourist masquerade). The best part is that you get all of this for an extremely honest price. 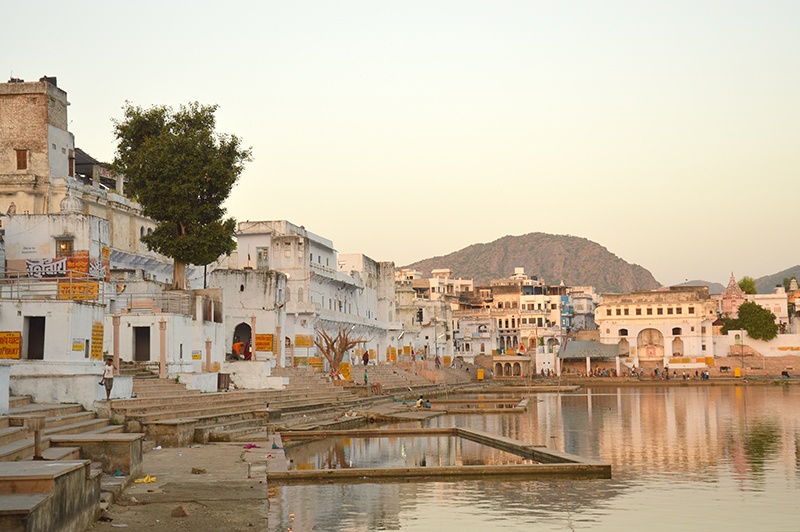 2. Partying On The Sacred Hills Of Pushkar

The bus ride from Jaipur to Pushkar takes around 5 hours, with a bus change in Ajmer. The city is built around a sacred lake, which is a popular pilgrimage site for Indians. Sitting by the lake at sunset while the neighbouring temples raise their chanting prayers is a magical experience.

The holiness of the place melts into the everyday life of tiny markets and sacred cows wandering around. Here, local women wear some of the most colourful attires I’ve seen in India as if they have to balance the sand tones of the desert with bright pinks and reds.

A not-to-miss temple to visit is the Sikh Temple (Gurudawara Singh Sabha), a striking white domed fortress that glows in the sun. But the real gem of the place is the Savitri Mandir, a hill temple where you can have the best 360 view of the lake and the surrounding desert. The hike to get there is less than one-hour long and will reward you with the best picture opportunities, especially if you get there at sunset or at sunrise.

Despite the holiness of the place, Pushkar is also a hub for backpackers. You can start the night in one of the local bars as the Pink Floyd Café, the Funky Monkey Café or the Rainbow. Here you will meet travellers and regulars alike and will probably get invited in one of the frequent rave parties happening on the hills. Those parties are only spread by word-of-mouth, so keep an ear out! 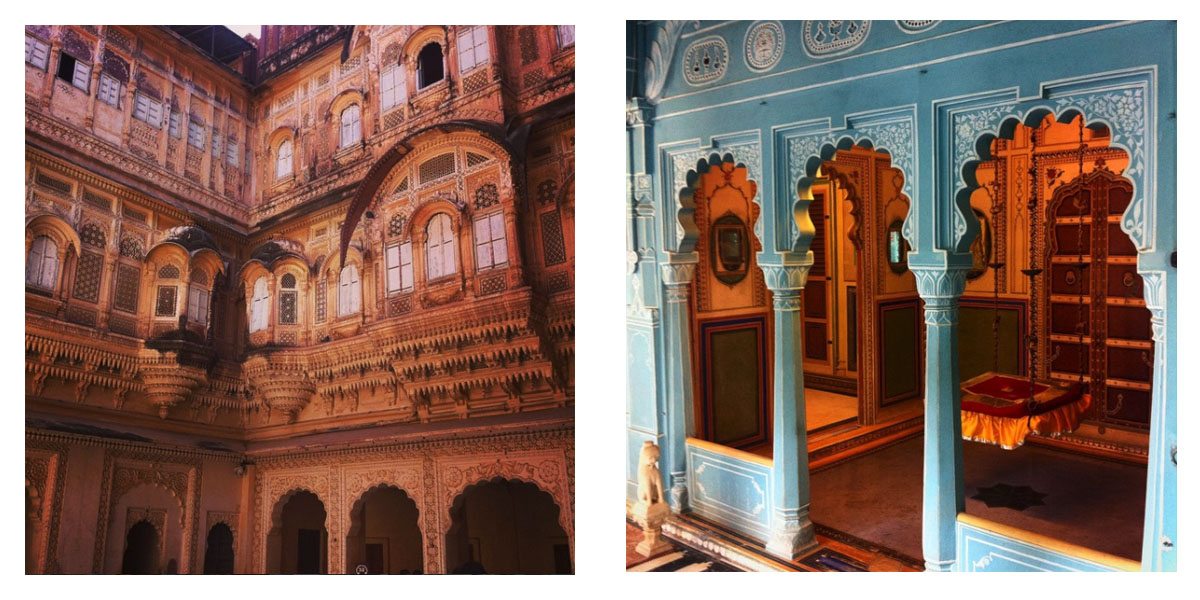 The bus ride from Pushkar to Udaipur is one that you will remember. Eight hours on a winding road up to the mountains and then down to the arid plain again. The beautiful City of the Lakes won’t disappoint you though: a maze of narrow streets filled with havelis (the traditional palaces) and brightly painted local houses.

Udaipur is the most relaxing city in Rajasthan, if not in India. Here you will find plenty of rooftop restaurants that serve local cuisine, traditional sunset dance shows and the beautiful Jagdish Temple. If you stay close enough to the lake, you will get up to the sound of women doing their laundry on the shores. The hotels by the lake usually have a pool as well, which you can access paying a small entrance fee.

But the biggest sight of Udaipur is it wonderful City Palace. Rajasthan largest palace, it is also the most wonderfully decorated. When you’re done with sightseeing are you’re seeking a bit of relaxing (kind of) you can stop by Prakash yoga classes. He offers yoga classes on a donation basis in a small studio on the shores of the lake. He is the undiscussed yoga reference for the city. 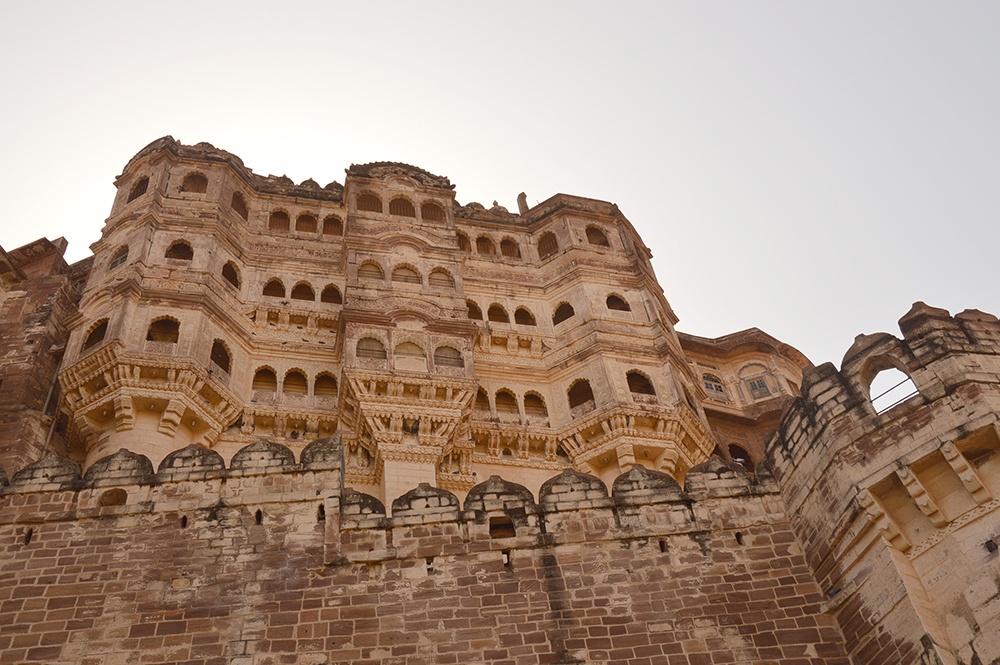 4. Exploring The Blue City Of Jodhpur

The 5 hours’ bus ride from quiet Udaipur to bustling Jodhpur will serve you to get used to the new mood. Jodhpur is one of the few blue cities of the world, and stumbling around its alleys and markets constitutes a sightseeing opportunity in itself.

The city is towered by the massive Mehrangarth Fort, a huge fortress that has been the home of the local Maharajas since the 18th century. The views from below the fort are imposing, but the scenery that you can enjoy from the top is also incredible. The bird’s eye view of the Blue City is at its best from this privileged lookout. Actually, one of the reasons why the city may have been originally painted in blue was to please the Maharajas. Although the most likely reason is that the city was the house of many Brahmins, which painted their houses in Lord Shiva’s colour: blue. 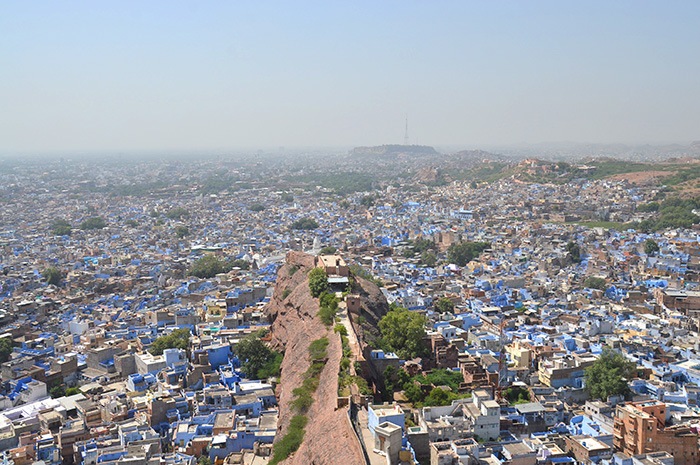 5. Riding Camels In The Thar Desert In Jaisalmer

You can reach Jaisalmer with a 5 to 7 hours’ bumpy bus ride from Jodhpur. The Golden City gets its name from the infinite expanse of the Thar Desert that surrounds it and the unforgiving sun that shines almost every day of the year.

The old walled city arises from the sand coloured neighbourhoods: a spectacular sight when you arrive in town for the first time. Once in, don’t miss the Jain Temple with its wonderful sculptures and the majestic fort. Outside of the walls, you can hop between the many Havelis of the city, the historical mansions of ministers and merchants, with wonderful architectures and interiors. They will give you a good insight of the life back in the golden Maharajas period. The most famous are Patwon ki Haveli, Salim Singh ki Haveli and Nathmal ki Haveli. But the best travel experience in Jaisalmer is the desert camel ride.

As touristy as it might sound, it’s not difficult to find small local operators that will take you out in a small group to ride along lesser known dunes (yes, there are dunes that are more “famous” and crowded than others). Camel riding can be a bit rough if you’re not used to it (seriously, who is?) but in the 2 days’ tour, you will have the time to take breaks in local desert villages and ruins. The best part is the night under the star, where the camel porters will cook a simple, but very tasty, local meal for you around a bonfire. A wonderful opportunity to share stories with likeminded travellers under a million stars.

Top Tip: don’t forget to bring your sleeping bag if you have it. Despite the guides set up a “real bed” with covers for you, the night in the desert is freezing. And remember to tip the guides at the end of the tour. They are good local guys that actually do not get paid that much from the tour operators. 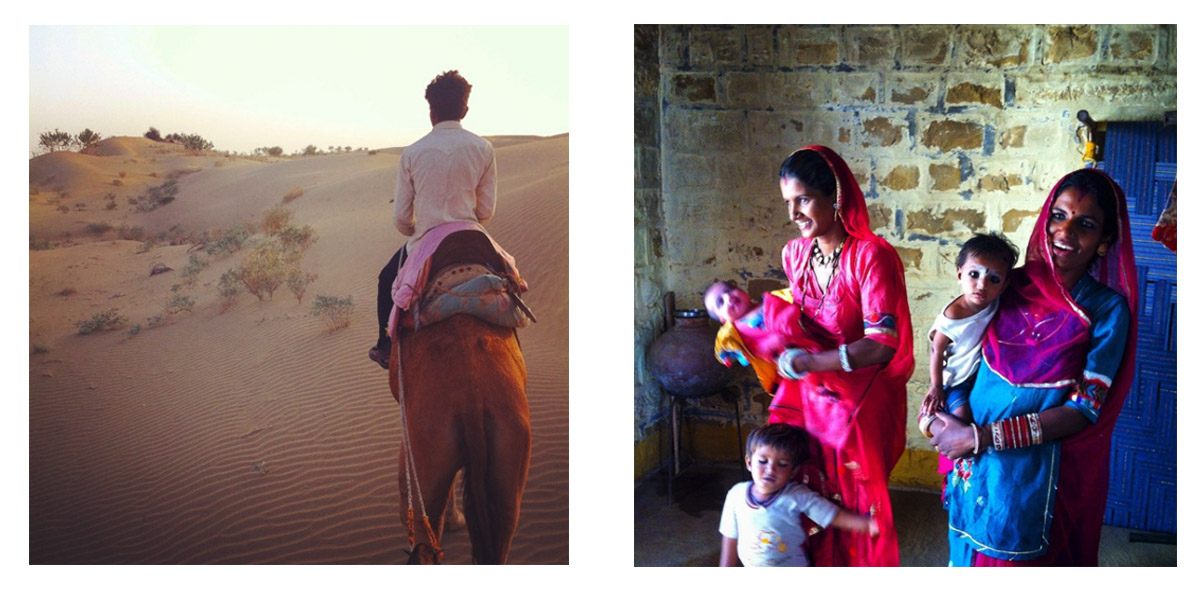 Follow The Sun: Backpacking The Asian Trail
The 5 Craziest Festivals In South Asia

View all articles on Culture
BackpackingIndiarajasthan