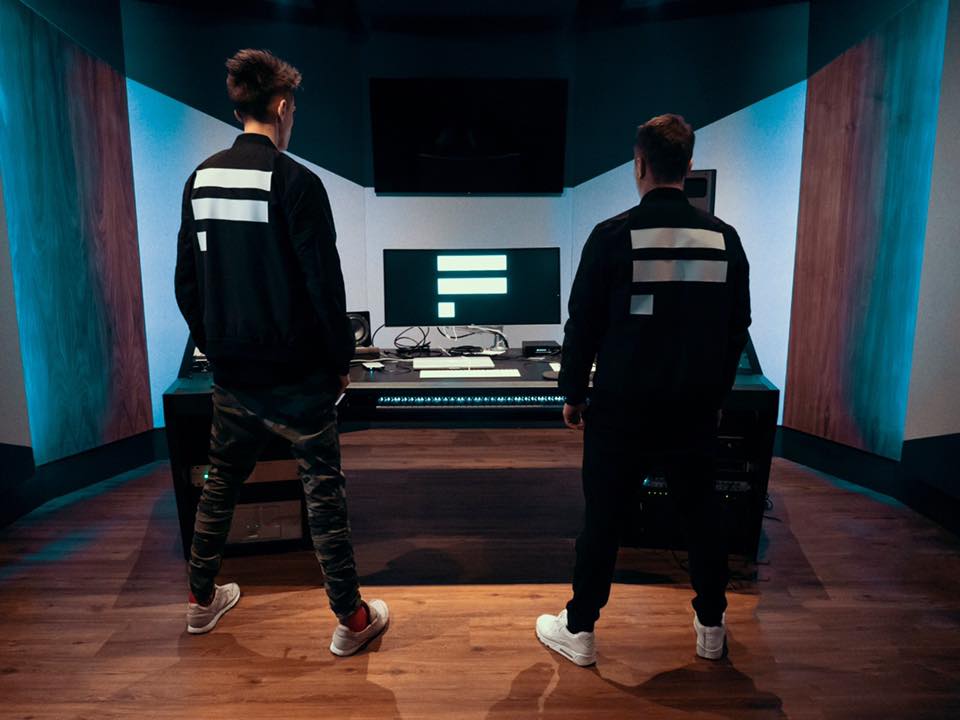 Making their highly anticipated debut at ASOT900 this year is none other than FUTURECODE.

The collaboration made up of popular trance DJ’s and producers Ben Gold and Omnia have joined forces to showcase the best of their individual styles together. Closing out the record-breaking celebration of ASOT900, the duo took the main stage crowd of over 15,000 on a melodic journey during the final hour of the event. I had the opportunity to sit down with them before the show and find out everything you need to know about FUTURECODE.

What inspired you two to come together and form FutureCode?

BEN GOLD – We released a couple of records as Ben Gold and Omnia, one called ‘The Gateway’ and then one on my album called ‘The Conquest’. We just had this real natural feeling in the studio, the same vision. It was really easy to make music, I knew what he was thinking, he knew what I was thinking and it was just natural. We played a really cool festival together.

OMNIA – We played Untold Festival in Romania last year, which was really huge, and Electronic Family here in the Netherlands. So it was a really good decision for us to collaborate for the brand new project, after releasing two collaborations and playing two big festivals.

How do you feel about closing the ASOT900 main stage?

B – Super excited! To be honest, we’re more excited than anything! We have a sound and we want to present that sound in the best way possible. We’ve been in the studio working pretty hard to be honest, like three and a half, four months of solid studio work.

O – We’ve been totally focused on FutureCode stuff for the last three months.

O – I’ve never been so productive you know! Like with my solo project, so this is great.

B – It’s great that we both know how to make music, so we could delegate certain parts of the production process. There are things that Evgeny really excels at, and other things that I can maybe do better at. So we figured that out at the beginning and we’ve just got the whole productivity of the project well-oiled right at the beginning; so when we actually started the production, it was really easy. It was like, you do this, I do that, I do this, you do that, and everything kinda just married up in the end.

How do you think the crowd is going to react to your debut?

O – I think there’s going to be a good reaction, especially with all of our new stuff; which we actually played some of our new songs two days ago at the A State Of Trance radio studio and we’ve already had such great feedback!

B – Yeah, feedback’s been really good! I think when you play this stage, whether you’re playing opening, closing, middle, whatever… yes, you’ve got 35,000 people inside this venue, but you’ve got millions that will be tuning in online, watching live and then those sets are going to get ripped and played again. So we wanted to bring something which was fresh and unique, but also stay true to a closing set and make sure that we deliver on that front as well. We believe what we’ve got is the best of our ability.

The hype is pretty crazy, to be honest. I’d say we didn’t expect it but no one expects it, you for work it and you hope for it, but we’ve started to really feel that people are talking online. We’re about two hours out and all our work is going to be presented to the world so we’ll find out exactly what everyone thinks. 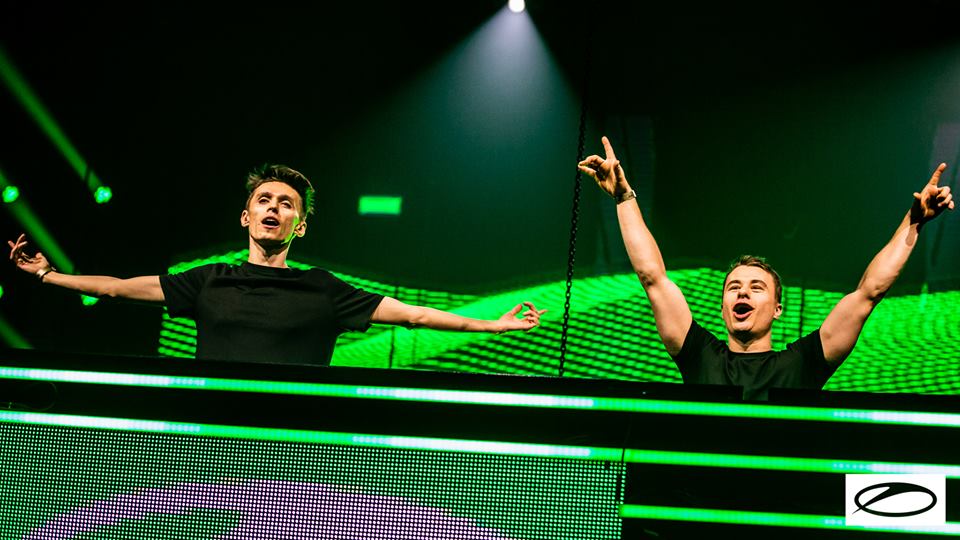 What inspires your sound. Are there any artists or styles that inspire this sound or do you just bring together what you create individually?

O – I think we’re at the stage right now as solo artists, where we’ve got a great background and a really great front base. I don’t know how but eventually, we moved into kind of a similar sound like we’ve got the same vision in what we’re doing with trance music. I’d say I’ve been inspired by a lot of trance productions, like Ben Gold productions.

B – Yeah absolutely, a lot of your records all go into my sets and we’ve been friends for a while so we’ve been swapping records way before they get released. I was playing his track ‘Cyberpunk’ six months before Armin had it; and vice versa, I sent him ‘Stay’ from my album really early, so we really had that same connection. It’s really with the melody, our music is melodic, and it’s not fast. We are not ‘afraid’ of 138, but we don’t play 138 as Ben Gold or Omnia, so it didn’t make any sense to start making 138 music or playing that kind of speed. However, our records are all about the melodies and the sounds and the emotion.

Trance is a feeling, trance is a sound, trance isn’t a particular BPM or energy level or a baseline. It’s such a huge genre and I think we’ve identified a part of that genre which really works for us. It’s hard not to get inspired by people because you sit in the studio and you’re always referencing other people’s music.

O – It’s such a great inspiration for everyone, not only for us but most of the trance artists are inspired by Armin. When you hear A State Of Trance festival, you realise there’s a man behind all of that, doing such a big festival and a radio show and everything. I’d say Armin is definitely a big inspiration, not just for us but for all trance artists.

What are your goals for this project? Do you have any ambitions to play at big events and stages like Tomorrowland for example? Have you thought about where you want to take this?

O – I’m not really thinking about like ‘this is the goal and we need to achieve that’. What we’re doing right now I think, the best of our ideas that we have in the moment, we’re just sharing with each other so we can see how we can make it even better together. If I have a really good idea from a track, I’ll definitely show it to Ben because I know that together, we can do it even better.

B – We don’t have a plan really for where we want to take this project for now. You mentioned Tomorrowland at the beginning… we haven’t released a record, so I think it would be great to play these festivals but I think that’s something for next year. As I said already, we can’t believe that we’re closing ASOT and we haven’t released a record yet! I think it also shows Armin and Armada and the ASOT team were really happy with what we were talking about to them when we were discussing the project, and they certainly see and feel there’s something in it, hence why we got this set.

We have six months of releases done and a lot ready to go. I think that’s quite a lot; releasing six records in one year from any artist is quite a lot. So, let’s get these ones done and then we’ll definitely be hitting the studio again. We probably could have finished another three but time was not on our side; but more importantly, we wanted it to be perfect. We didn’t want to play a record just because it’s a new record, we wanted to play a record that we know is gonna rock a festival or a club or particularly, the ASOT main stage.

You’ve played back to back sets at big festivals such as Untold and you’re about to perform together for the first time as FutureCode on as you said, ‘the biggest trance stage in the world’. Do you think you would prefer to see this project played at big festivals or would you rather see it in a smaller, more intimate venues?

B – The festival shows are amazing to play because you hit so many people in one go, the pictures look unreal and the hype, especially when it’s streamed as well, is such a bigger opportunity than a club; to hit more people in one go. Personally, I love playing as Ben Gold in clubs. We were just discussing this earlier and playing in clubs, nothing’s planned. We’re the same, we don’t plan our club sets, because you go with the vibe, you go with what’s going on. You’ve got a longer time, two (minimum please), three, four hours; but with festival shows, you’ve got your hour and it’s so strict on the time.

Festival shows are a performance and the club shows are DJing. We would love to play a club show as Future Code, where we’re not so tied to playing all of our own music. We’ve only played festival shows, as Future Code or Ben Gold b2b Omnia; but we would love to step into a club with a bigger record box and more tunes and play it by ear. Maybe, that’s something we’re going to be announcing soon, it could be a possibility. 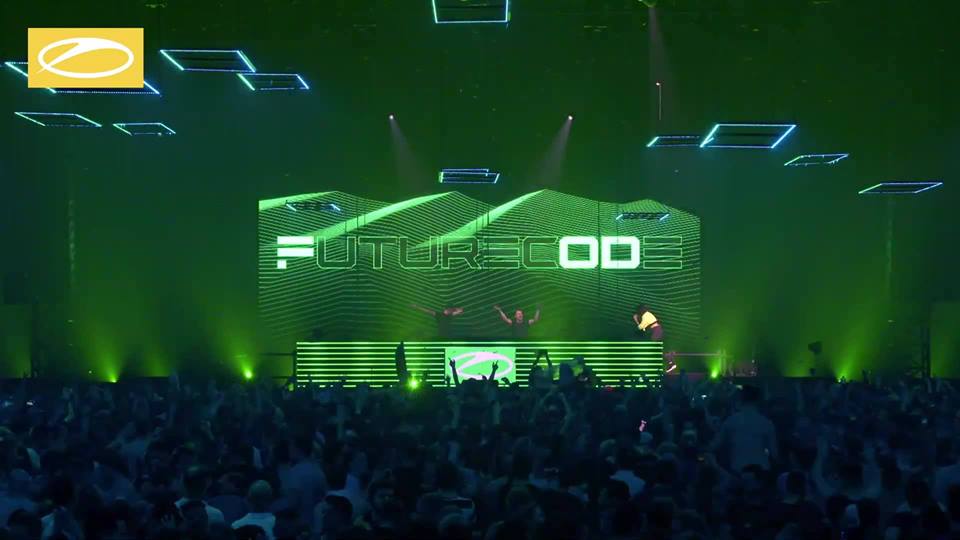 What can we expect to see from FutureCode in the upcoming months and years?

B – We would love to sit here and give you the exclusives on where we’re playing and what festival shows we’re playing this year but sadly we cant. Not everywhere has been announced yet, in fact hardly anywhere has been announced yet. We’re playing at EDM Mania in Slovakia, and we’ve got a handful of shows all ready to announce. We have a record contract with Armada; every record you’re going to hear tonight will be released as a single. The first one drops exactly one month today, and then there’s going to be a lot of FutureCode music throughout the summer. The whole project’s been natural, it’s just been natural in the studio, it’s been natural with the branding, the concept and the ideas.

B- It’s grown really quickly. We didn’t expect to be premiering this brand or this project, closing the biggest trance stage in the world! That was not something we even discussed, and you could potentially say that that was what kickstarted the project, it certainly made it ‘official’ and that this is what we were doing. I think that the future for FutureCode is bright and we’re excited!

Relive the debut of FUTURECODE at ASOT900 below and keep up to date with Ben Gold and Omnia for upcoming shows and releases.

Read more on our ASOT interview series with MaRLo.