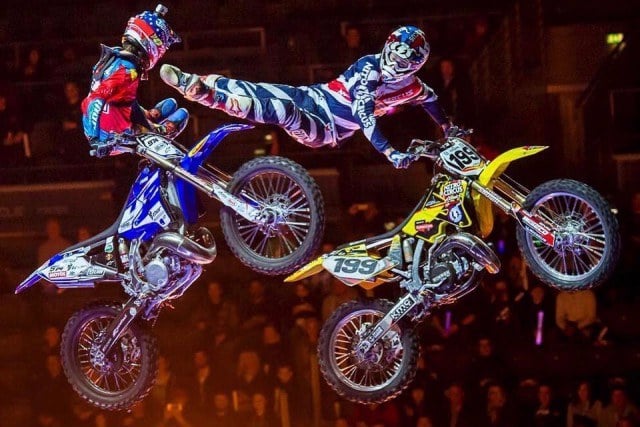 Get Ready Australia, the Nitro crew have assembled and they are heading our way.

Nitro Circus is getting ready to hit our shores once again and by all reports this will be the biggest, loudest and craziest show of all.

The crew led by Travis Pastrana is heading down under as part of its 10th anniversary ‘Party of the Decade Tour.’

With seven shows planned across Sydney, Melbourne and Brisbane there is a need to move fast, as these shows will definitely sell out!

The Nitro Circus team are amongst the world elite when it comes to action sports, tricks and flips.

“Be it a motorbike, skateboard or even wheelchair these guys will ride it and they will thrash it.”

With entertainment at the forefront the Nitro squad really know how to push the limits.

“Bigger is always better and these guys will no doubt stun you with their aerial antics.”

Among the 40 strong cast, Frenchman Thomas Pages will be a standout known as one of the most exciting freestyle motocross riders in the world. With a number of Red Bull X Fighters titles to his name Pages will be worth the price of admission alone.

Australia will be well represented in the Nitro Circus show with Josh Sheehan known as the first man to complete a triple back flip on a dirtbike. Sheehan will be joined by fellow countryman Blake ‘Bilko’ Williams who is also a regular on the X Fighters circuit.

“The incredible line up goes on and on with athletes combining from all around the world to ensure one epic tour.”

Another Australian set to light up his hometown is scooter star Ryan Williams. Williams is a YouTube sensation, fast becoming known as the greatest scooter rider on the planet. With a string of world firsts to his name including the first fakie frontflip and double frontflip, Williams will no doubt be looking to push the envelope a little further in front of an adoring Aussie crowd.In BMX, New Zealand star Jed ‘The Warrior’ Midlon will be out to show off his trademark quadruple backflip. To this day Jed is the only man on the planet to successfully land this exhilarating trick.

There is no doubt this will be a show to remember. Fans will be left on the edge of their seats with every run, every trick and every landing. Travis Pastrana has done an amazing job at growing Nitro Circus and the performance that is. It truly is a showpiece of epic proportions and something we don’t suggest missing out on.

For a taste of the action check out the awesome video promo: