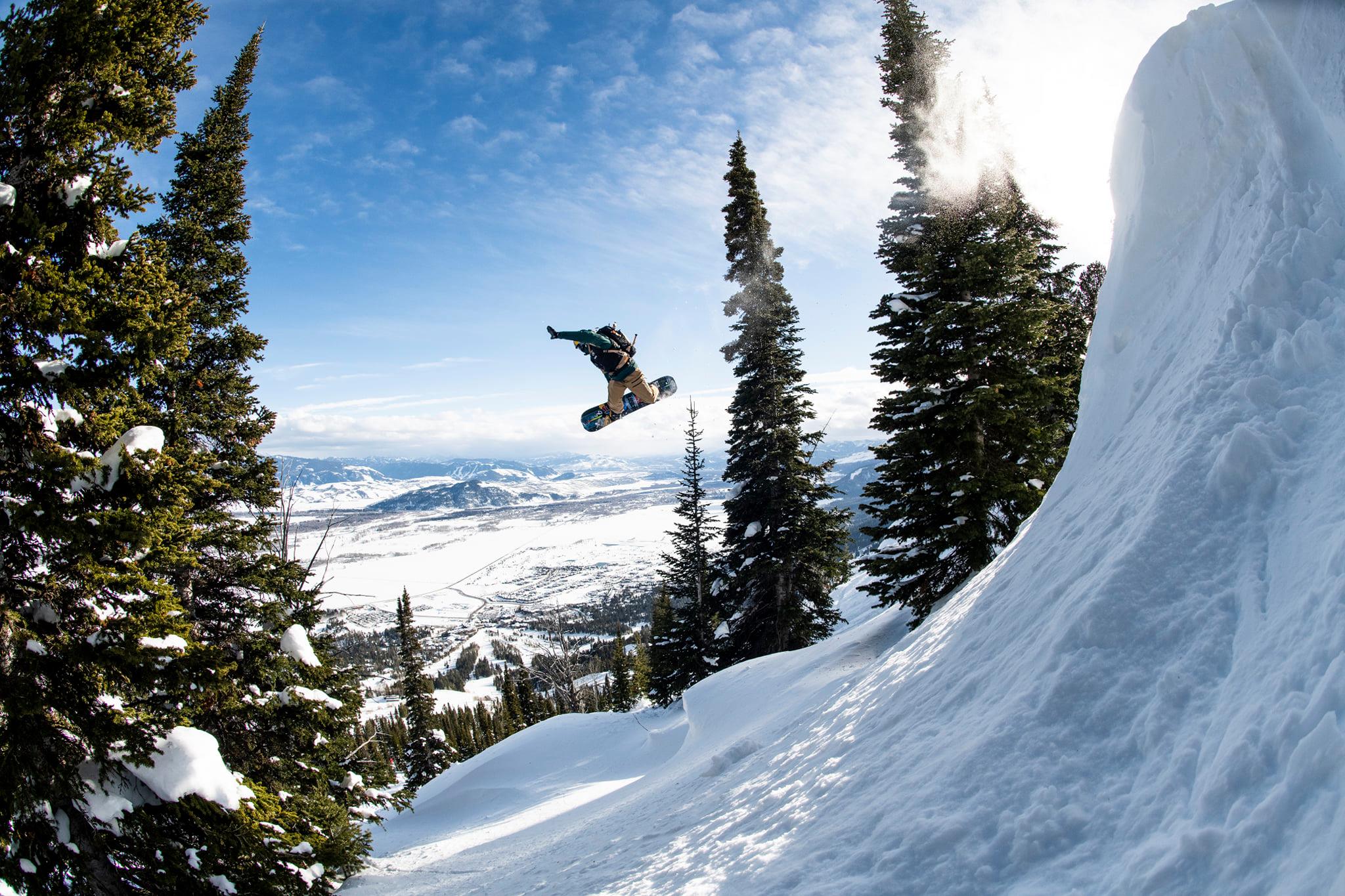 As part of ASC Action Sports + Culture, Oli Russell-Cowan spoke to Circe Wallace (Co-founder and Exec. VP, Action Sports & Olympics at Wasserman) and Liam Griffin (Co-founder & COO) about the Natural Selection Tour. They go in-depth about why the format has been so successful, what happened behind the scenes and what the plan is for next year.

Oli Russell-Cowan: Hey guys, it’s Oli from ASC Action Sports + Culture. I’m super excited to be joined today by the co-founders of the Natural Selection Tour Circe Wallace and Liam Griffin. Thanks for joining me. How are you?

Russell-Cowan: Congratulations on a massive achievement putting on the first year of the tour. It’s just been incredible to watch. Have you had time to soak it all in?

Circe Wallace: Oh, I was gonna say there hasn’t been a lot of time to soak it in. We’re straight into planning for next year.

Russell-Cowan: You’ve had loads of curveballs thrown in this year with the pandemic, restrictions etc. How did you plan for the unknown? Did you have a backup plan? Did you plan for various scenarios?

Griffin: Yeah, I think there was a little bit of writing a ‘Choose Your Own Adventure book’, where you’ve written all the endings, and you just don’t know which page you’re gonna turn to at any given point.

Wallace: And also, keep in mind, we’ve got Travis there, he was pushing the limits all the time.  It’s like a Rubik’s Cube. It was an interesting, challenging year. But also, I think we really did push the limits of all of our potential. And that’s what Travis is known for. Right? So I give a lot of credit to Liam, this would have not have happened without Liam, identifying what was and wasn’t really possible with a lot of research and a ton of effort. 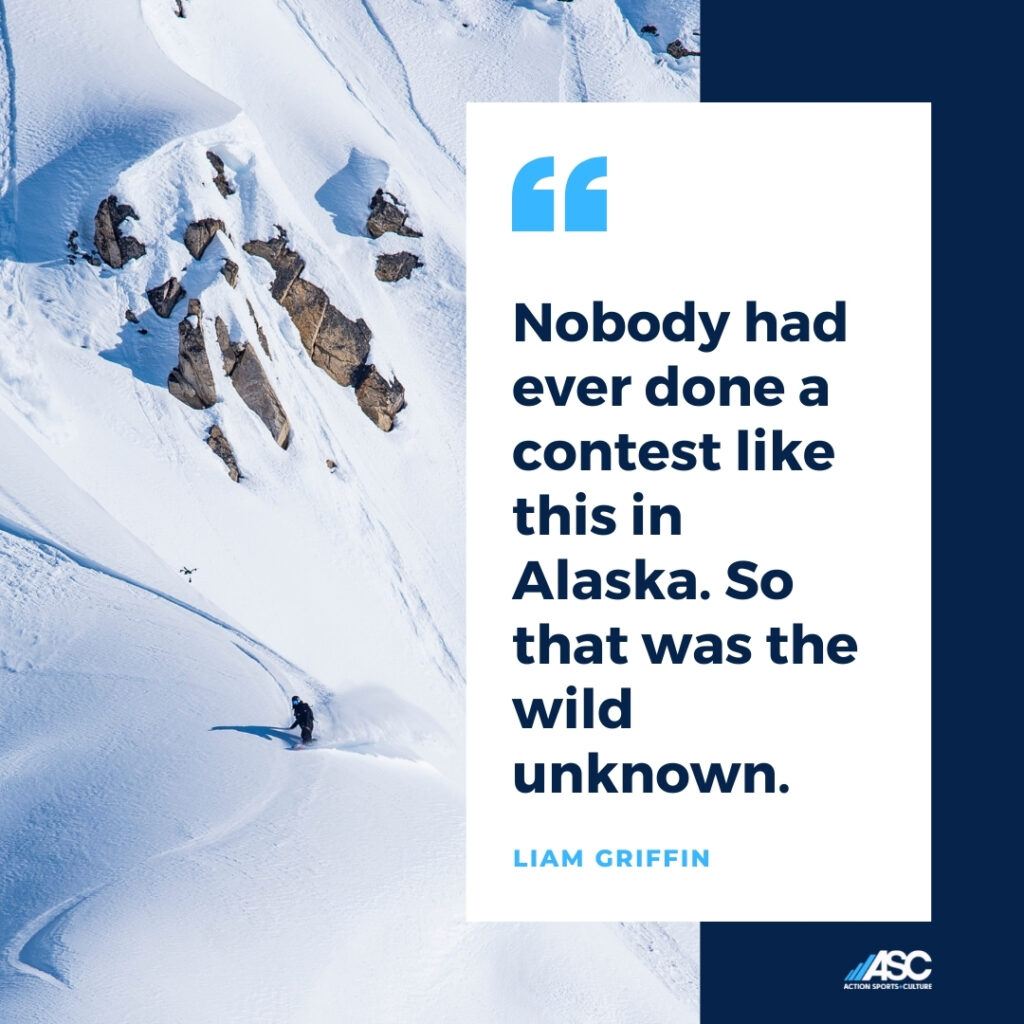 Griffin: Thanks Circe. So much of the vision is Travis’s. I think he pushes everyone, not just our crew, but the riders, the filmers, to really maximize the time and the experience that we have wherever we are.

AK was unlike anything anybody had ever seen. Nobody had ever done a contest like this in Alaska. So that was the wild unknown.

It was really crazy because Travis wasn’t able to go to Alaska either. Circe was Travis in Alaska.

Wallace: Yeah, I wasn’t originally slotted to go because of limited seats in the Lodge. I got a call a few days before the event and I wanted to be there. And Travis conceded to the reality that he was having a baby. During the holding period, I got the call and I was booked within 48 hours to come. So that was an adventure, for sure.

Griffin: Having Circe there was huge as being able to provide that rider perspective. Also, hat’s off to Chris Rosman, who’s stepped in, helped me a lot on some of the early site visit stuff within the window identifying faces, like really giving that xompetitors perspective that Travis provides.

Wallace: Travis had done a site visit. He was instrumental in identifying all of the areas as we did have some variable snow conditions. 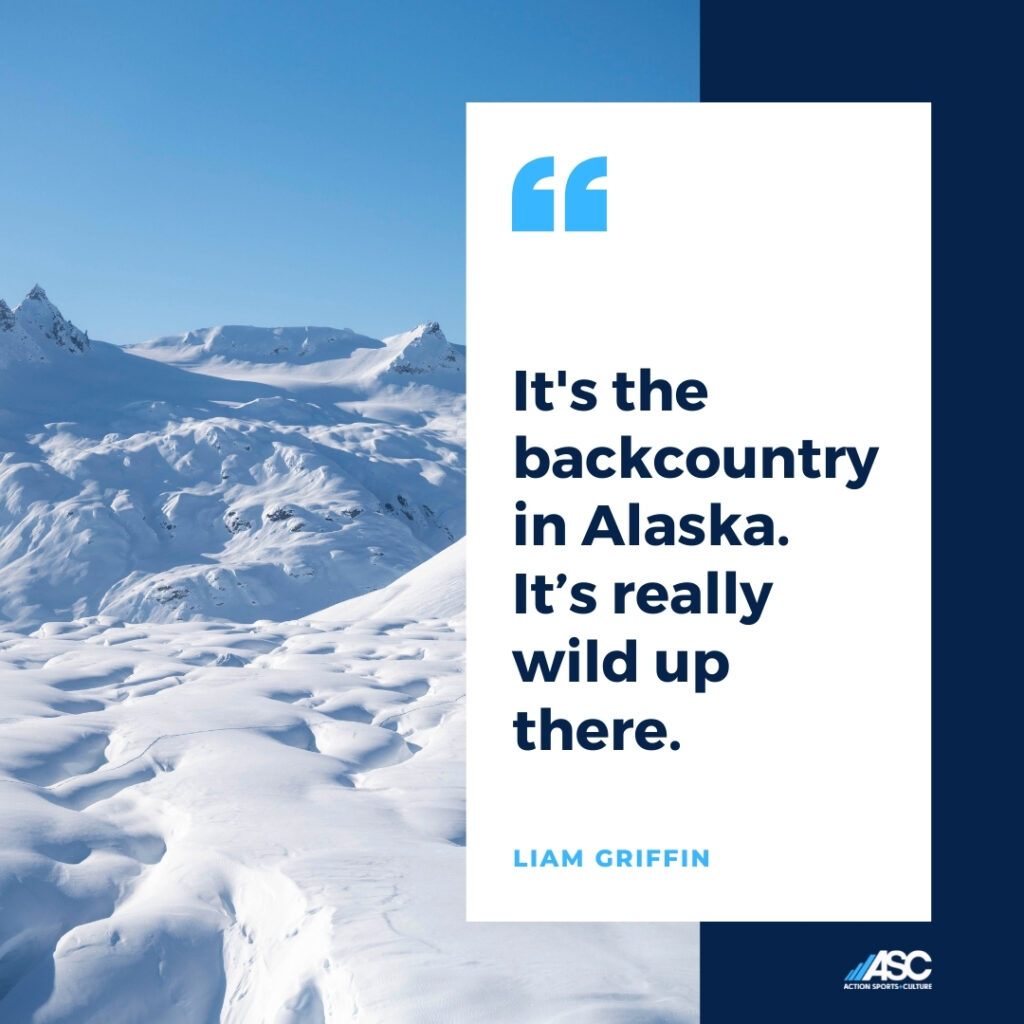 Griffin: Travis went to AK, did everything that he needed to do, in case the baby didn’t come in time. The baby ended up not coming in time and he wasn’t able to make it there for the event. But he had done this huge download of images and sketches and drawings and plans for venues A, B, C, D. It’s the backcountry in Alaska. It’s really wild up there.

Things change so rapidly, the pendulum swings to huge extremes so that you don’t really know where you’re going to hit it as far as weather, snow conditions and stability. So that was huge, like that solo site visit, which I think a lot of people saw photos and videos from thinking he was there. But there was a little smoke and mirrors on the media side.

Russell-Cowan: Did you guys think that the response to the event would be that great?

There’s something a little tangent on the evolutionary chart of snowboarding that takes things off in a slightly different direction. But even that said, the response at Jackson was totally overwhelming. I think, just hearing from people outside the industry, hearing from people who maybe left the industry and have been disconnected from it for years, and then kind of came back to it through this. It felt very, like multigenerational too in terms of the feedback, people from across the entire spectrum of snowboarding.

So that was not totally unexpected, but a little surprising, just the volume of the bandwidth that got sucked up. And there was a perfect COVID storm to a lot of people stuck at home, a lot of people looking for a point of connection. I think people found that through consuming content.

Wallace:  I think there was an appetite, right, that we needed something disruptive in this space. The homogenization of snowboarding with the Olympics, and the evolution of that as kind of the crowning achievement that doesn’t factor in this aspect of snowboarding, which is really relatable.

Everyone loves a good powder day. Right? Everyone knows how good that feels. At least snowboarders do.

And so I think, it was just a kind of a perfect storm in terms of people not being able to do all the things that they love to do, having an appetite for progression of snowboarding because it had kind of plateaued. And, and really having, I guess limited opportunity to consume. So recording, and the fact that we got good weather, the quality of the stream, like all of those things, I think just allowed for people to tune in, in a way that felt new and exciting. 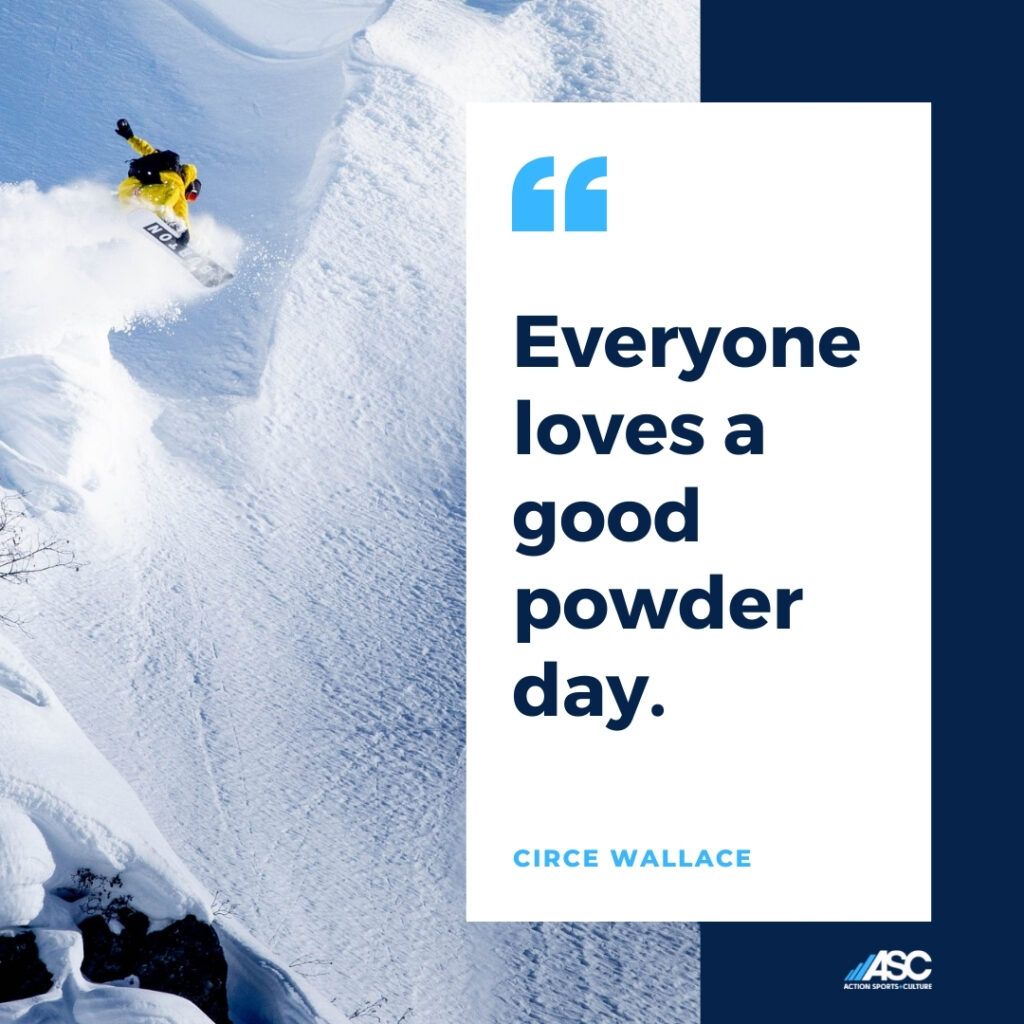 Travis and Liam especially put a lot of energy into the format. That’s always the challenge, right? You watch X Games or the Olympics, and it’s very limiting in what you can actually consume. And this, I think, gives a greater perspective of the capability and the human potential of these athletes while also putting it in an exciting kind of escalating format that is more aligned with the sports formula. And that packaged together really worked. I think certainly Travis without a question thought that we would break the internet. But I think you never know. And so to actually do that felt pretty darn exciting. 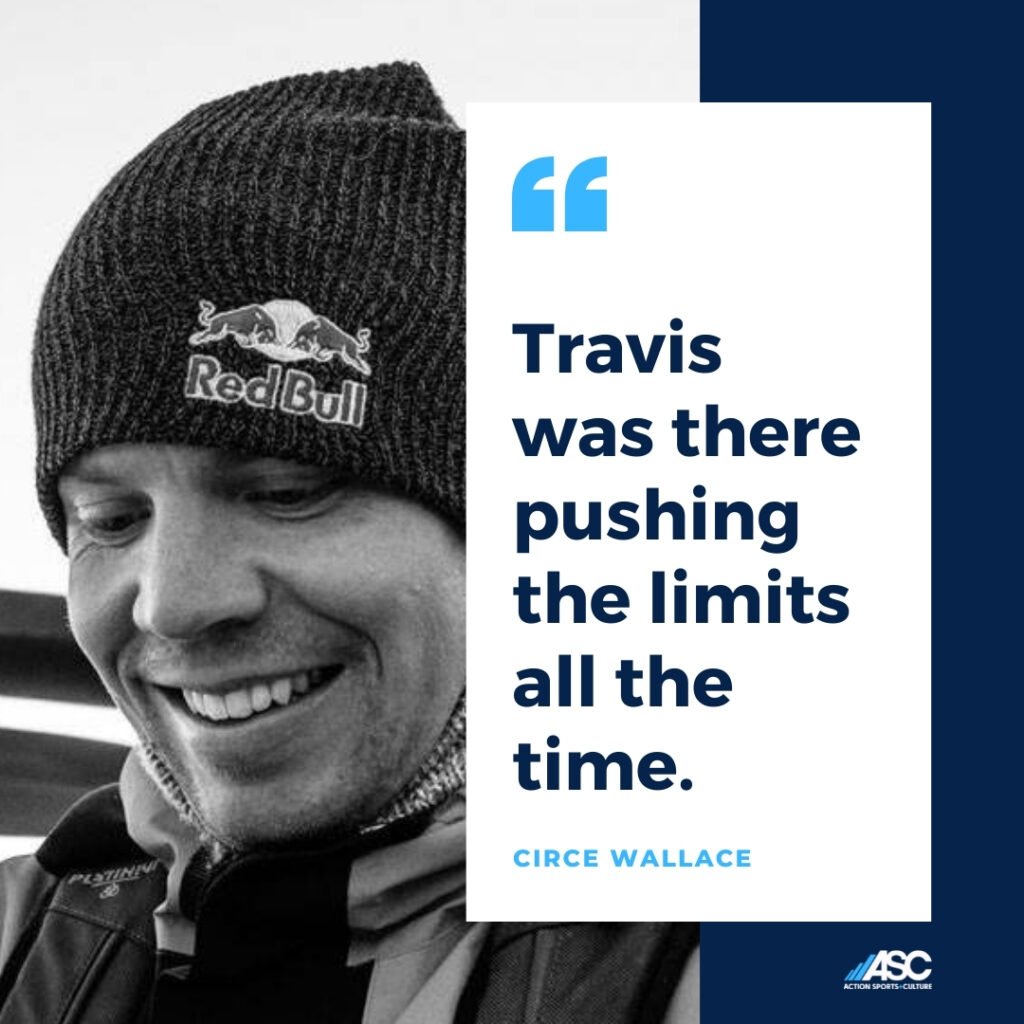 Griffin: Yeah, to further Circe’s point about the format, like the head to heads became memefied. You know, you’re doing something right when the internet takes hold of the thing and makes it their own.

All those matchups, some of them very unlikely, some of them with favorites, some of them with underdogs. We haven’t really seen that. Air + Style did it for a couple of years with head to heads, but I don’t know that it was, as live or as heavily consumed at that time. So not something entirely new. But I think the combination of this different format with head to heads in a different venue, which is inherently more difficult for people to understand, right? Because you’re not comparing apples to apples, every run is a little bit different.

I think if you did a three run best run counts format with 16 men, you’d have to keep track of so many runs. You’d be like, Oh, is this one better than that one or not? Because this guy went this way. And then someone wanted a completely different line when you only have to compare A versus B. It’s like these little digestible chunks. It’s easier to understand. And even if you’re not a diehard snowboarder, your attention span is long enough.

Those little chunks, I think kept people engaged because they wanted to see who wins each of these little miniature competitions instead of this big long drawn-out competition. It’s little digestible chunks that you can watch. You have a favorite, and they advance or they don’t.

Russell-Cowan: Where does it go from here? What are you guys working on?

Griffin: Strike while the iron is hot, right. I think the most logical next steps for us are figuring out how to online a live event in BC and a live event in AK. We’ll see if we get there for next year. There’s a bunch of steps, primarily financial ones that we need to make to ensure that those things are able to be executed. So then we have three live events.

Russell-Cowan: Circe, Liam, thanks so much for your time. It’s been great hearing about everything that went on behind the scenes on tour. I will definitely be on the lookout for news and look forward to following all the action.