Mike Cessario, Co-Founder & CEO of Liquid Death Mountain Water Talks about Brand, their 700 Million Valuation and Why Most Marketing Sucks

Mike Cessario started his career in advertising as an Art Director. He then became a Creative Director working in agency land for the likes of Crispin Porter & Bogusky, VaynerMedia and Street League Skateboarding.

Mike always knew he wanted to start his own company. He saw a gap in the healthy beverage market for a water company built around brand humor. He thought, why did all the unhealthy products like junk food and energy drinks get to have all the fun. So in January of 2019 Mike launched Liquid Death Mountain Water an aluminium canned water from the Austrian Alps. With damn right hilarious savvy marketing campaigns and a death to plastic approach they have gone full throttle in the CPG space and produced the raddest merch. Most recently LD have partnered with Martha Stewart on a Dismembered Moments Candle and Bert Kreischer’s Body By Bert. They raised $70 million in a series D round valuing the company at $700 million.

Tune in to find out how Cessario started Liquid Death, getting investment, disrupting the healthy beverage market, building the team in hyper-growth mode and what his plans are for thirst murdering global domination!

Mike Cessario: I think with any brand you have, you want to find strengths that you have and things that you own. They always say, ‘what can you own?’ It’s usually not smart for a brand, to try to invest in something that they’re gonna have a really hard time owning. Whereas you look at us, is there any other beverage that would make more sense for Halloween than Liquid Death? Probably not. That’s something we could absolutely own. There’s not much competition around.

When you see there’s an opportunity to own something you have to go for it. On the flip side, people have asked us, ‘how come you guys don’t go way bigger and way louder about sustainability and cans.’ It’s definitely a part of our brand. But at the end of the day, as a brand, we can’t own aluminium cans. So when we spend a bunch of marketing dollars to tell everybody cans are infinitely recyclable. The minute there’s six other canned waters, I’m using my marketing dollars to tell you why all these other brands are great, too.

We always want to lead with Liquid Death as a brand and this kind of fun comedy, humour based ridiculousness that we really are are out to make people laugh and make stuff that doesn’t feel like marketing, but feels more like something you’d watch on Saturday Night Live or on an actual comedy show. That’s how we want to market. 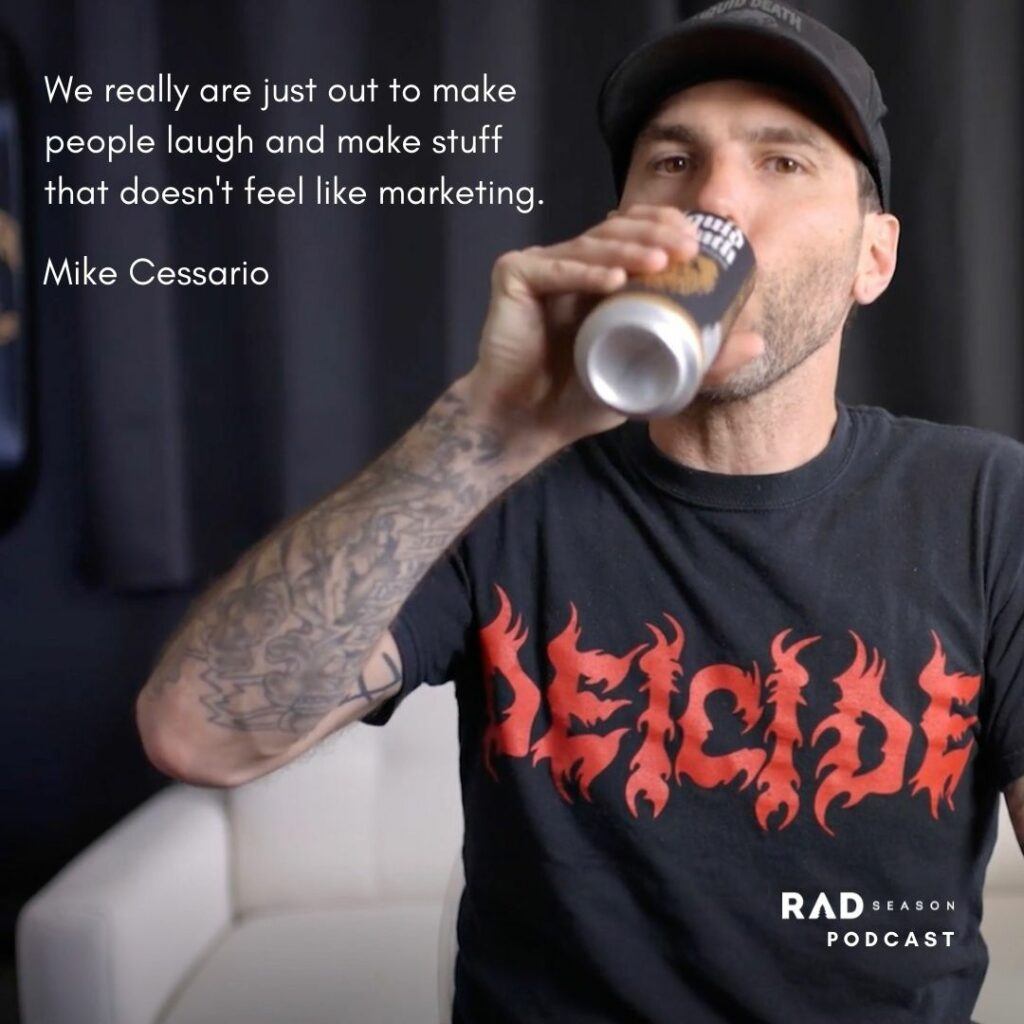 Oli Russell-Cowan: I’ve heard you say in the past, it’s always kind of been about the humor. it’s got to be entertaining  to you and your friends. Then if you think like that, and they do, then there’ll be other people out there that do as well. Right?

Mike Cessario: Exactly. I think so many people when they’re trying to think of marketing, or they’re trying to be funny, they think what would make all of these people laugh? That’s a hard thing to do. But if you just focus on one person, like a specific friend. How do I make him laugh? If that works, it’s probably going to make billions of other people laugh.

It’s an easier way to think about what you’re doing versus trying to make this certain demographic laugh. You’re probably not going to be successful like that. The reality is everyone thinks we’re all so different, and everybody laughs at something totally different. It’s not really true. For the most part, a lot of people laugh at the same stuff. That’s why certain TV shows are massively popular.

We all kind of share a lot of the same sense of humor when it really comes down to it.

Every great innovation they talk about usually starts with something that pisses you off.

What do you care enough about and it fucking gets under your skin and annoys the shit out of you. For me, it was how bad marketing was. Like God, if I have to sit through another terrible commercial. I watch TV with my wife, and we watch these commercials. She’s like seriously there’s a room of people that went through tonnes of ideas and spent hundreds of 1000s, if not millions of dollars on that!

It’s the one connective tissue between all the people who love Liquid Death. I think that one thing  and there’s plenty of data showing is everybody hates marketing. It doesn’t matter who you are. People hate commercials. They hate ads, they’re willing to spend a premium to have an ad free service. 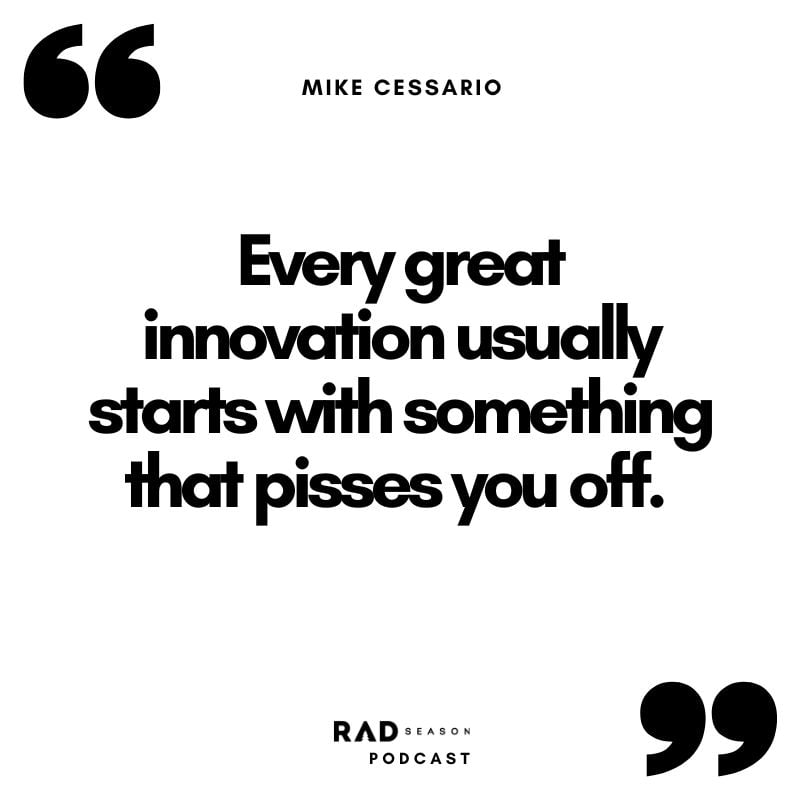 Oli Russell-Cowan: They don’t want to be sold too, right.

Mike Cessario: Yeah. And the way they’re being sold to. It’s like they literally think people are idiots or something.  Like really, you thought that was good and make me want to buy that, do you think I’m that stupid.

Liquid Death at the end of the day, we’re really making fun of marketing and brands. I think people get that.

It doesn’t matter if you like skulls and Slayer or not. You get what we’re doing that we’re making fun of marketing and that we’re not taking ourselves seriously. They respect that and want to support that, even if they’re not a skull person. That’s not what it is. They understand what the role of the skull is. And they appreciate the role of the skull, you know, because it’s not another big bland, corporate bullshit thing that seems like it was created by a robot or something.

You can also follow what Liquid Death are up to on Instagram at liquiddeath and if you want exclusive access to rad merch drops don’t forget to sell your soul on their website liquiddeath.com