Breaking the Bank: How to go Heliskiing 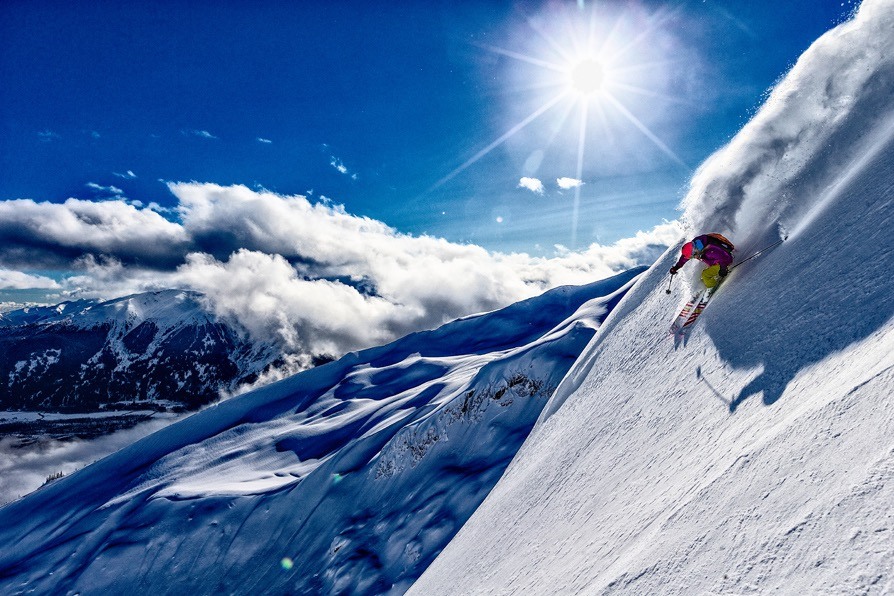 Heliskiing. It costs a fortune but it’s worth it reckons Alf Alderson

Before we go any further allow me to disabuse you of any notion that I am a man of means – all my heliskiing has been done in my capacity as a freelance (some would say freeloading) journalist.

And whilst many of the people I’ve met on these trips would scarcely notice the eye watering charge for it being deducted from their bank account, for me – and I dare say you – this is the most expensive ski experience you’re ever likely to have, so it’s one that you want to get right.

That said, heliskiing is not exclusively for the fat of wallet. Several times I’ve met regular, mad keen skiers who have saved hard – and maybe for some years – to indulge themselves in what for them may be a once in a lifetime ski trip.

So, you may just find a ski bum from Whistler or Chamonix rubbing shoulders in the helicopter – literally – with a captain of industry, surgeon or banker (try to avoid the temptation to shove the latter out of the machine on take-off); and since everyone looks the same in their ski gear it’s a surprisingly good leveller, especially if you consider that the beardy ski bums are probably better skiers than the banker and surgeon.

It is actually possible to enjoy heliskiing without breaking the bank though, as I discovered in Italy last winter. Head to Livigno and you can get two ‘drops’ out in the superb backcountry on the edge of the Stelvio National Park for a not unreasonable €275 (www.heli-guides.com); this obviously includes a guide, which is standard with any heliski operation – in fact most will also have a ‘tail gunner’ along to bring up the rear and pick up the oafs like me as they wipeout in the thigh deep powder and get themselves stuck in tree wells.

Heliskiiing in the French Alps 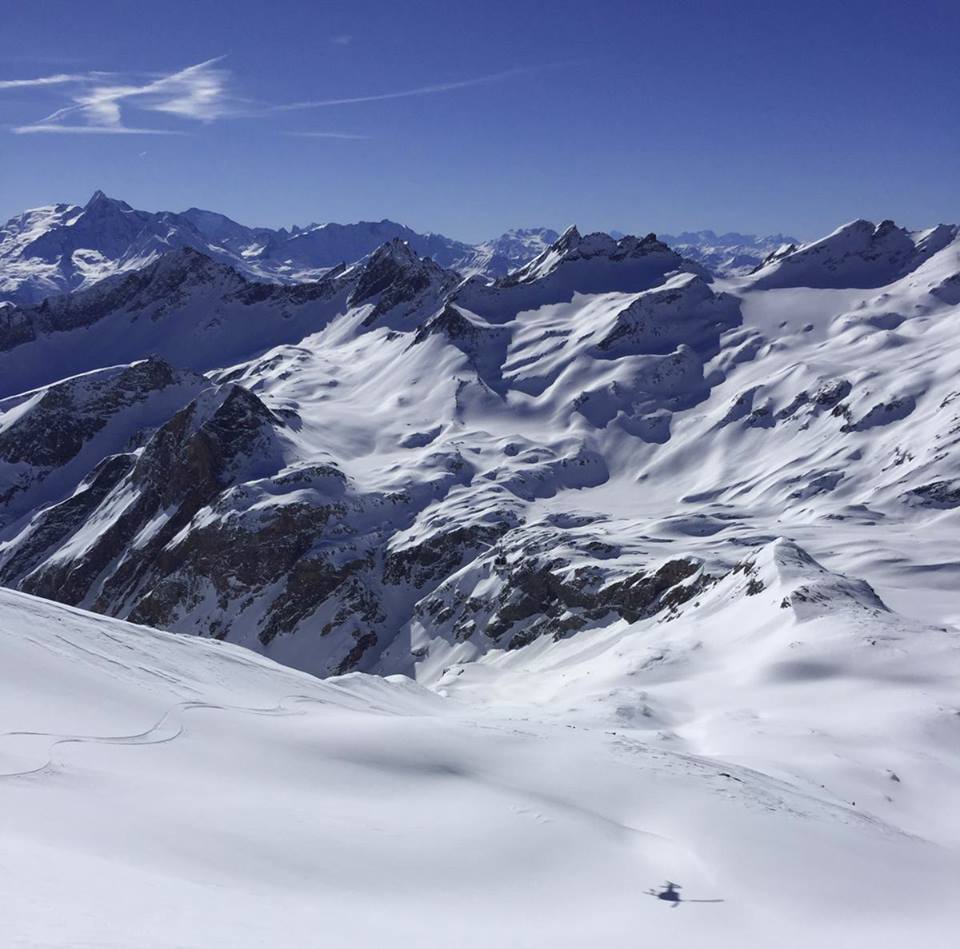 A few weeks after this I got the chance to hop out of a helicopter with my skis again (not literally, they’re carried on the outside in a metal basket), this time almost within sight of my home in the French Alps, although we were actually in Italy. Heliskiing is banned in France, but companies such as Val Heliski will meet you in La Rosiere on the border of the French and Italian Alps from where you use the lift system to ski to the border.

Here you’re picked up by your ‘heli’ (a Canadian guide once told me “Never call them ‘choppers’”; I’ve no idea why), dropped atop a peak within Italy and enjoy as much as 2000-metres of vertical descent down to La Thuile from where you take the ski lifts back to La Rosiere (the two resorts are linked).

Cost – from €350, lift pass not included. Not a cheap day out but it still makes heliskiing available – just about – to the masses.

However, I guess the purists would argue this isn’t the real thing, by which I mean the whole wilderness heliski lodge experience, and having been fortunate enough to enjoy this kind of heliski adventure too I have to admit that this really is about as full-on a ski trip as you could ever hope to enjoy. 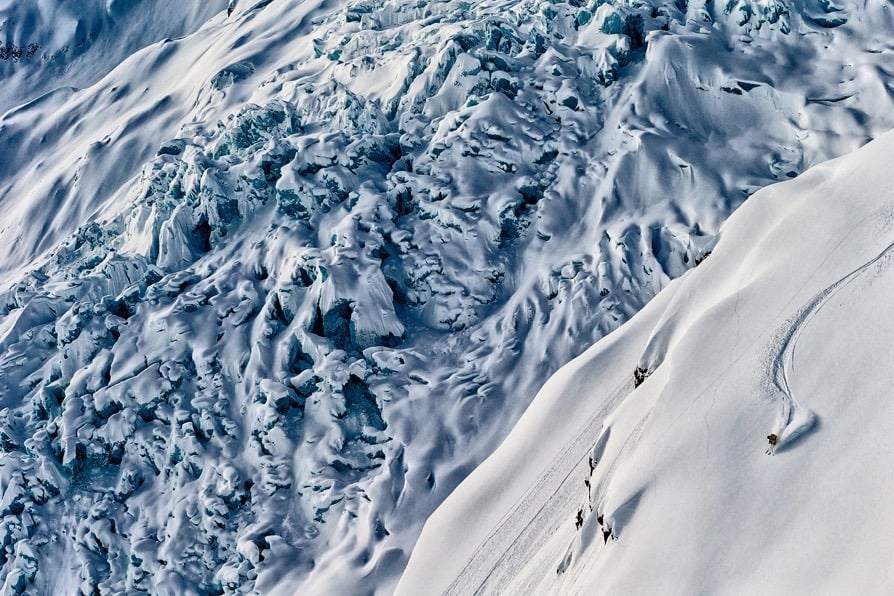 BC is the destination that automatically comes to mind, along with Alaska. I’ve enjoyed skiing with a couple of excellent outfits in BC and may even have been to Alaska with one of them, Last Frontier – they’re based right on the BC/Alaska border, and it’s quite possible that during the 33,00-feet of vertical we got in on our best day’s skiing we crossed the border into Alaska and the USA.

No one knew for sure as there are no border posts, and you certainly don’t have to worry about fat-arsed jobsworths otherwise known as customs officers ‘welcoming’ you into the USA when you visit this way.

When you’re in truly wild and remote locations such as this the skiing becomes that bit more serious. You’ll be supplied with an ABS backpack, transceiver etc. if you don’t have your own and there’s a compulsory transceiver practice out the back of the lodge before you get anywhere near the ‘heli’ or the hills.

You also go through a detailed drill how to enter and exit the helicopter without losing your head and this being North America you naturally enough sign away all rights should your craft plummet out of the sky or crash into a grizzly bear.

And this being North America, and BC to be precise, you also get spectacularly vast amounts of talc dry powder to play in. I won’t bore you with flowery words on the pleasures of skiing powder, but rather give you some plain statistics which put it all in to focus:

Last Frontier – the biggest heliski operation in the world – has a staggering 2.2 million acres, or 9000 sq kms of terrain to play in. If that doesn’t mean much to you, that’s over six times the size of Greater London, all of it uninhabited by humans, in which there are around 450 named runs. 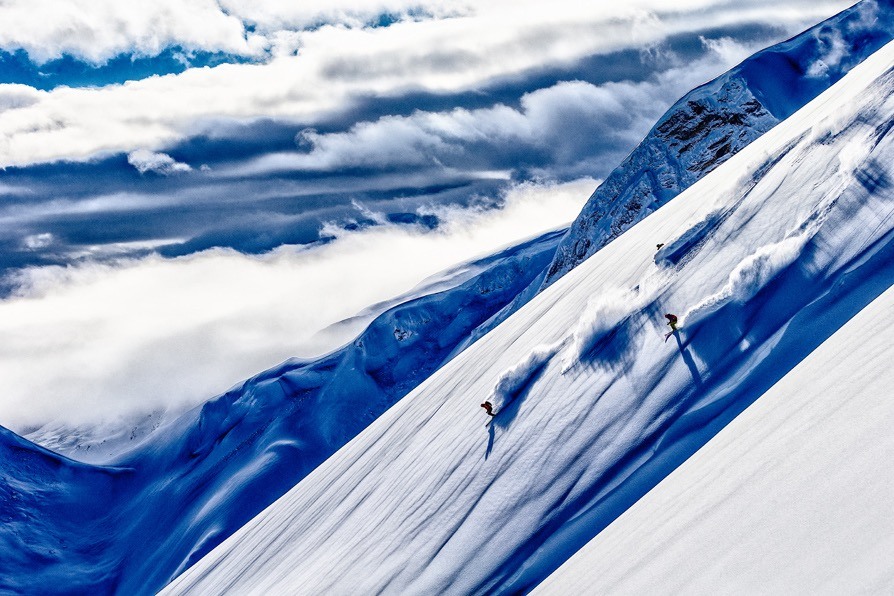 The superlatives continue – between 65-100 ft of soft, fluffy BC powder floats down onto these limitless acres every winter, the snow base is between 15-18 feet, and an average day’s skiing will see you cover 25,000 feet of ‘vert’ – although take my word for it, there is absolutely nothing ‘average’ about skiing here – check out their new promo video for proof of that.

Another splendid thing about Last Frontier is their helicopters – funky little Bell 407s flown by incredibly skilled pilots that take a maximum of five skiers and one guide, which means very little down time after each run so you certainly get the miles under your belt.

And then when all the action on the hill is over there’s the lodge complex – cosy timber cabins, superb dining, sauna and massage facilities – you will want for nothing (other than a spare pair of quads perhaps – it really is worth getting in tip-top shape before you go heliskiing in order to make the most of it).

This kind of skiing doesn’t come cheap – I stayed at the most northerly of Last Frontier’s two lodges, Bell 2, which costs from $US 5,698 for four days; plus you have to get yourself there.

However, there’s one heliski option that you can get to with Easy Jet. Iceland. 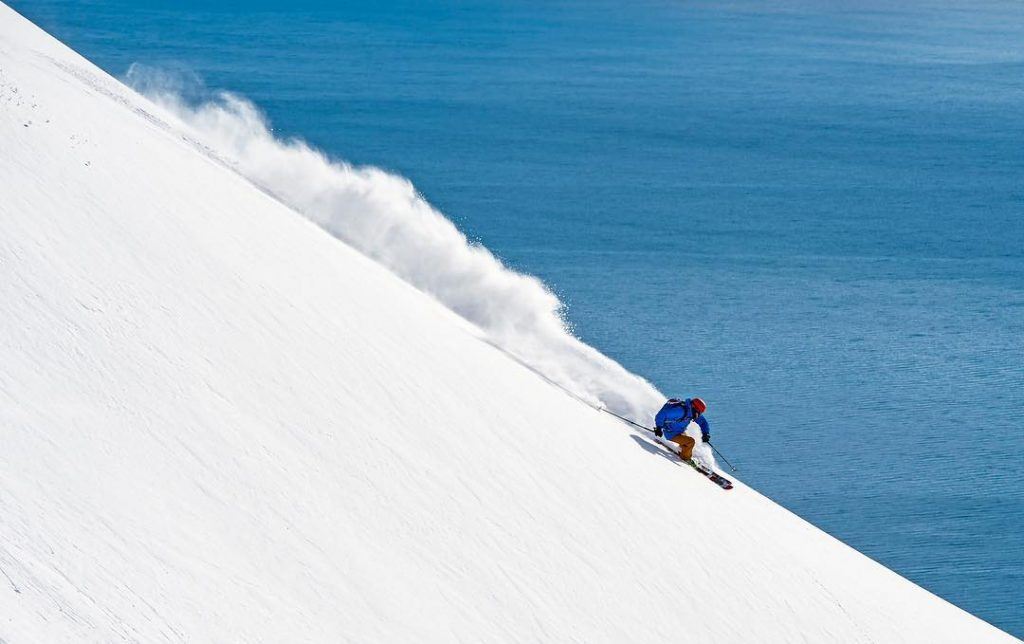 For me Arctic Heli Skiing is as good an option as European based skiers will get. Cheap access (even the connecting flight from Reykjavik to Arctic Heliskiing’s base on the north coast is less than €200 return) and, by heliskiing standards, good value skiing at ‘only’ €7,400 for four days.

Some things are not quantifiable in mere monetary terms though, and my experience on Iceland’s north shore was one of them.

Iceland’s ski terrain is unlike anything the ski resorts of Europe and North America can offer. Huge flat-topped mountains rise up above steep slopes and wide, ancient valleys, crags and cliffs streaked with black banded rock outcrops which contrast starkly with the white of the snow. In places the higher peaks are glaciated, and you’ll ski over some of these glaciers whilst heliskiing, but the most striking feature of the Icelandic heliski experience is the constant presence of deep blue fjords and the Atlantic Ocean way down beneath most of your drop off points. Sea level is actually where you’re heading for on many runs and the presence of the ocean serves as a dramatic backdrop, with mighty North Atlantic swells booming onto the black volcanic sand beaches where several descents finish.

It wouldn’t be accurate to call this a unique experience though since you can do the same thing on the other side of the globe in Kamchatka. Along with quad searing 6,000-foot descents to sea level you’ll also be skiing on active volcanoes, on vast powder fields, in some of the remotest mountains in the world.

The skiing, which I did with the excellent EA Heliski, can be challenging since Kamchatka’s Pacific coast climate throws all sorts of weather your way; we endured a four-day blizzard as well as four days of perfect bluebird conditions, but catch it when the weather is playing ball and this has got to be the most spectacular place on Earth in which to ski.

It’s not for the faint-hearted though – where in North America any time spent in or around the helicopter is closely monitored and rules must be followed at all times, the massive ex-military Mi2 helicopters in which you fly to and from the mountains in Kamchatka are like an aerial party.

They carry up to 12 skiers and their guides, have bench seats on which the use of seat belts is not compulsory and you don’t need them anyway since you’re allowed to wander around and enjoy the view on either side as you’re flying along; hell, you can even open the porthole style windows and stick your head out for a better view…

But, of course, this Siberian ski adventure don’t come cheap – €6,750 of your European Euros my friend; and that’s before you pay for London – Moscow – Petropavlovsk-Kamchatsky with the Ryan Air of intercontinental flight, Aeroflot.

But when all’s said and done, heliskiing is about far more than money. Sure, it’s expensive but it’s a ski experience like no other and one that you really will never forget, whether it’s a single drop in Italy or a week long adventure in one of the more remote corners of the planet.

Heliskiing in Italy – Alagna and the Monterosa Freeride Paradise

One thought on “Breaking the Bank: How to go Heliskiing”