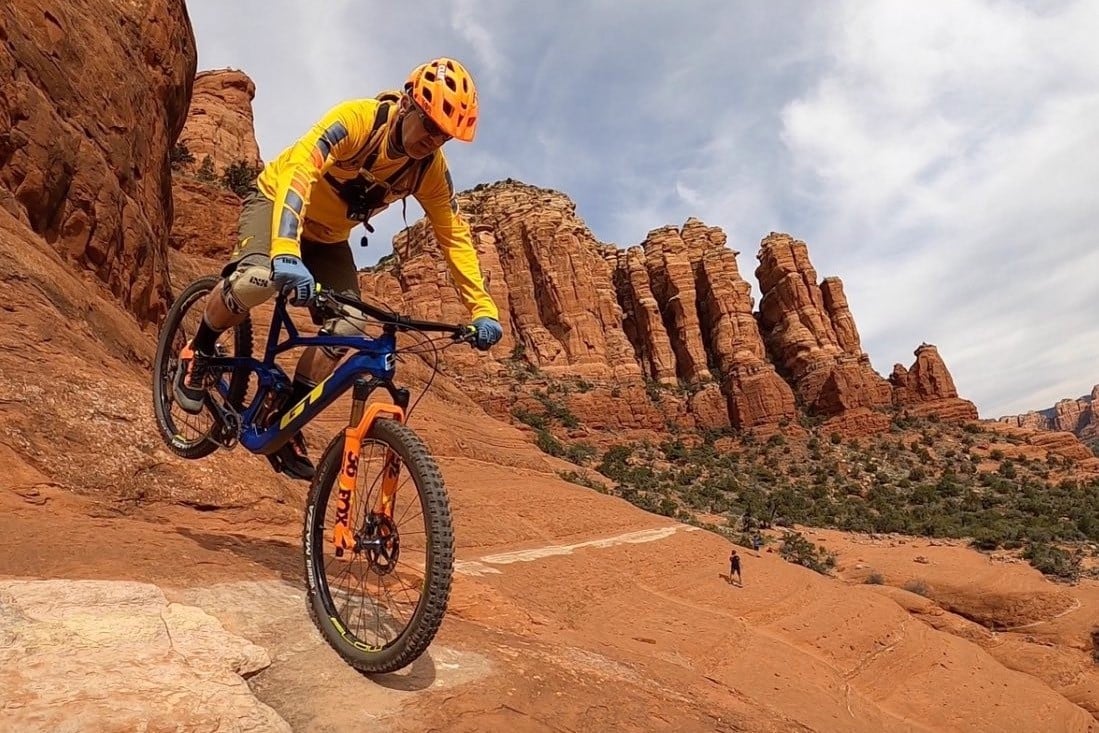 Hans Rey is a Former Trials World Champion, Pioneer of Extreme Mountain Biking and one of the Original Action Sports Content Creators

Hans ‘No Way’ Rey grew up in Germany and started riding bikes at an early age. He became the Trials World Champion and competed in mountain biking events around the world. He always knew there was something outside of competing and with his trials background he started doing stunts, producing videos and going on mountain biking travel adventures. This was considered Freeride mountain biking before the term ‘Freeride’ even existed.

Hans moved to the US and was around the corner from Hollywood in the 90’s. This opened up to appearances in TV shows like Pacific Blue playing himself.  He would do mountain biking demo shows and rode world first trails in Machu Picchu, down active volcanos in Hawaii and even descended Mount Kilimanjaro.

Hans has discover over 70 countries on his bike and appeared in 450 magazine front covers. He’s now focused on urban adventures, mountain biking in and around massive cities like Los Angeles, Hong Kong and his most recent film production ‘Slay The Bay‘ in San Francisco.

Tune in to the podcast below to find out how Hans became a pioneer in content creation and extreme mountain biking, his adventures around the world, setting up the Wheels4Life Charity and so much more!

Oli Russell-Cowan: You were one of the pioneering athletes for filming your different adventures on your bike and creating content. What was the idea of documenting your adventures ?

Hans Rey: Back in those days in the early 90s, mountain biking was all about racing. Stopwatches, lycra, training. The fun factor was kind of missing. I started doing my first videos and I knew even from the racing days that sponsors like to win a race and have the bragging rights and show off their product. But at the end of the day, if you win you get the exposure in the media. Traditionally, the only way to make a living in mountain biking was you race.

I thought there’s other ways I can find media exposure. That’s what I did when I started doing these videos, and it opened up the door to a whole new audience, different markets and also some mainstream media. These documentary films they live for a long time. A race is often forgotten two weeks later,  even if it’s the Olympics. One of these adventure trips, they’re still kind of relevant five or even 10 years later.

I kind of found a way to make a living without being a racer. That took some pioneer work and some adjustment for the bike industry. They weren’t used to it. ‘What you don’t want to race? Well, I don’t know if we can sponsor you.’

You had to prove yourself and do it all. That was long before the internet. You would get exposure in bike magazines and some outdoor adventure magazines but also on TV and videos. People would literally eat up those VHS tapes and wear them down. That was the only way people could actually see anything mountain bike related. It was hard to find information. So I guess it was at the right time to do all that. 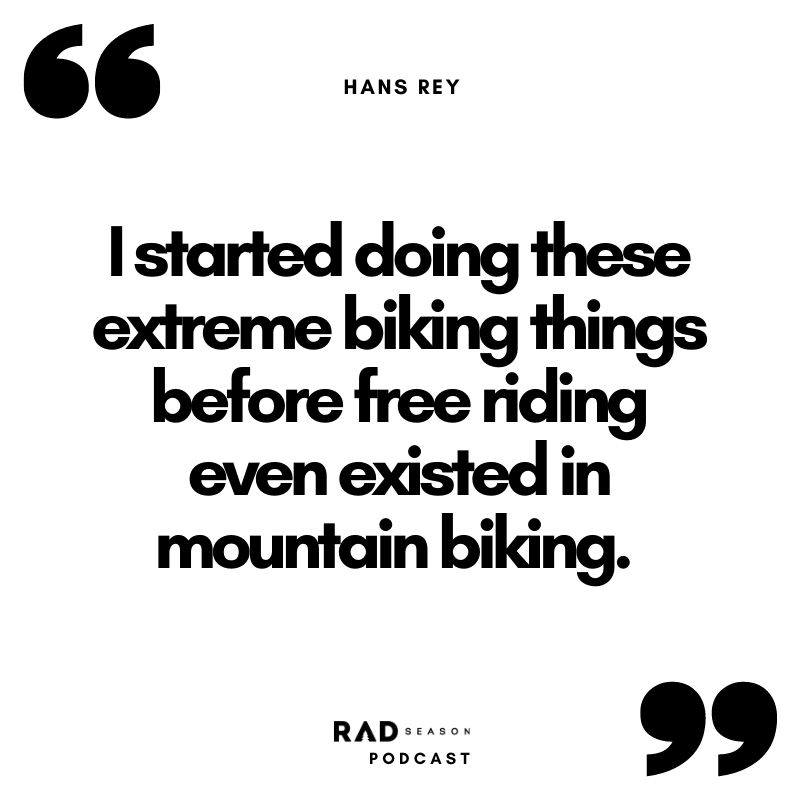 Influence Outside the Mountain Bike Industry

Russell-Cowan: Were you looking outside the biking industry seeing things happening and going how can we bring this in?

Hans Rey: Exactly. I always looked at other sports be it surfing, windsurfing, BMX or motocross. I was there in Southern California and would rub elbows with all these athletes. Being involved with Swatch at the time they would put on events with extreme skiers, skaters and BMX riders. Especially the extreme skiers influenced me because I would watch them go down these cliffs. These guys started doing these crazy things with cool music. 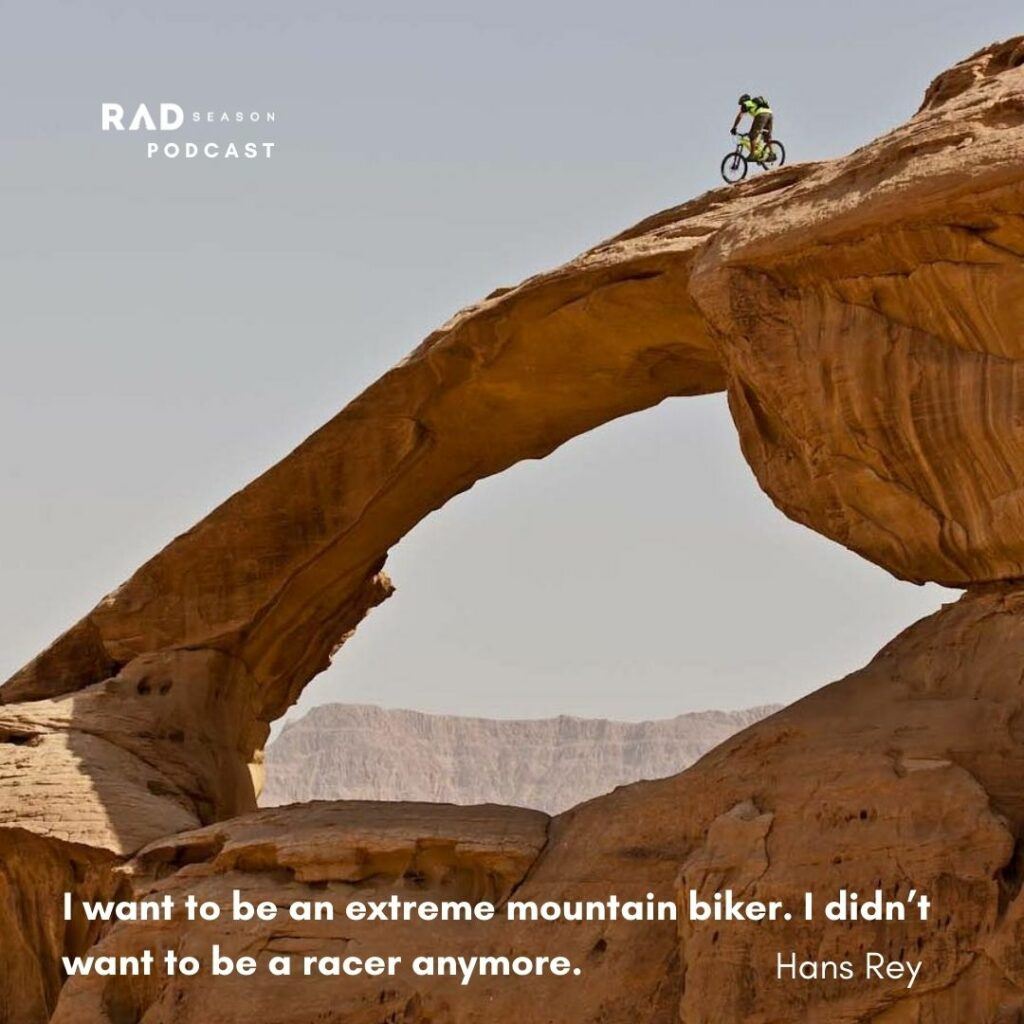 That’s when I started doing these videos and these publicity stunts on my bike. I toured with Swatch in the early 80’s. They had this MTV Museum of ‘Unnatural History Tour’ that went from shopping mall to shopping mall. Rodney Mullen, and myself and a bunch of people would do demos.

MTV had the first action sports programme. They had this MTV Sports, it was called. They would feature all these crazy sports. That was an influence. And definitely all these other sports. I would see what happened to snowboarding. They seemed to be a few years ahead of mountain biking. I figured mountain biking would kind of go the same path. There was a lot of parallels.