12 Of The Best Events & Festivals In Switzerland 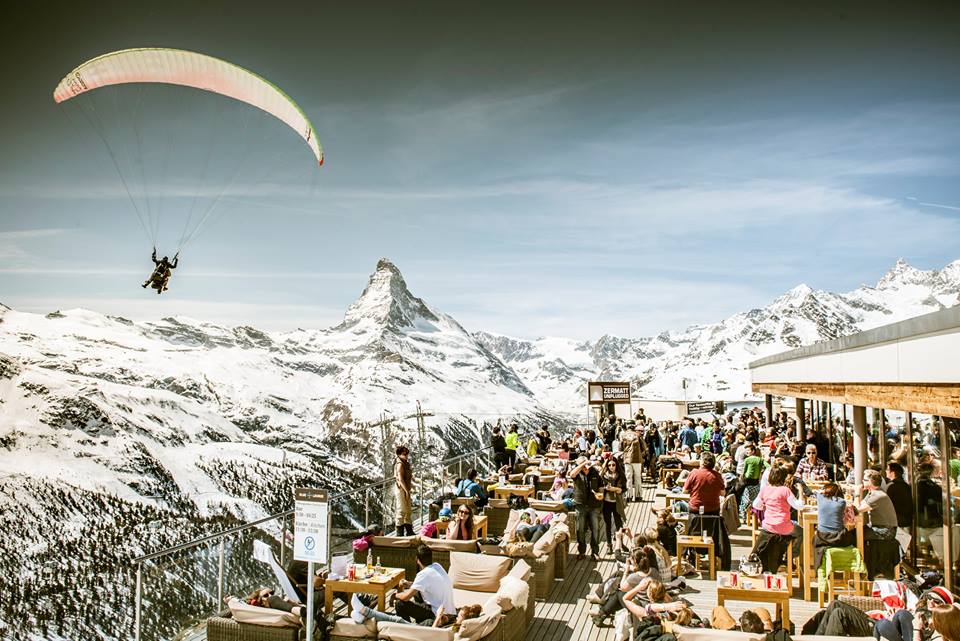 Switzerland is a stunning country and, not surprisingly, is on the bucket list of almost every traveller I know. The fact that it is home to the Swiss alps is what makes it so appealing, but also what makes it a great location for all kinds of amazing events.

Home for some of the most prestigious sporting events, festivals in Switzerland have plenty to keep you busy in both winter and summer. And as if that’s not enough, this gorgeous country is also the host of some of the largest music festivals in Europe.

But, enough chit chat; let’s take a look at the best and largest festivals in Switzerland!

Note: Some of the events and festivals listed are not too far in the future, but there might still be tickets available, so follow the relevant links if you are interested. 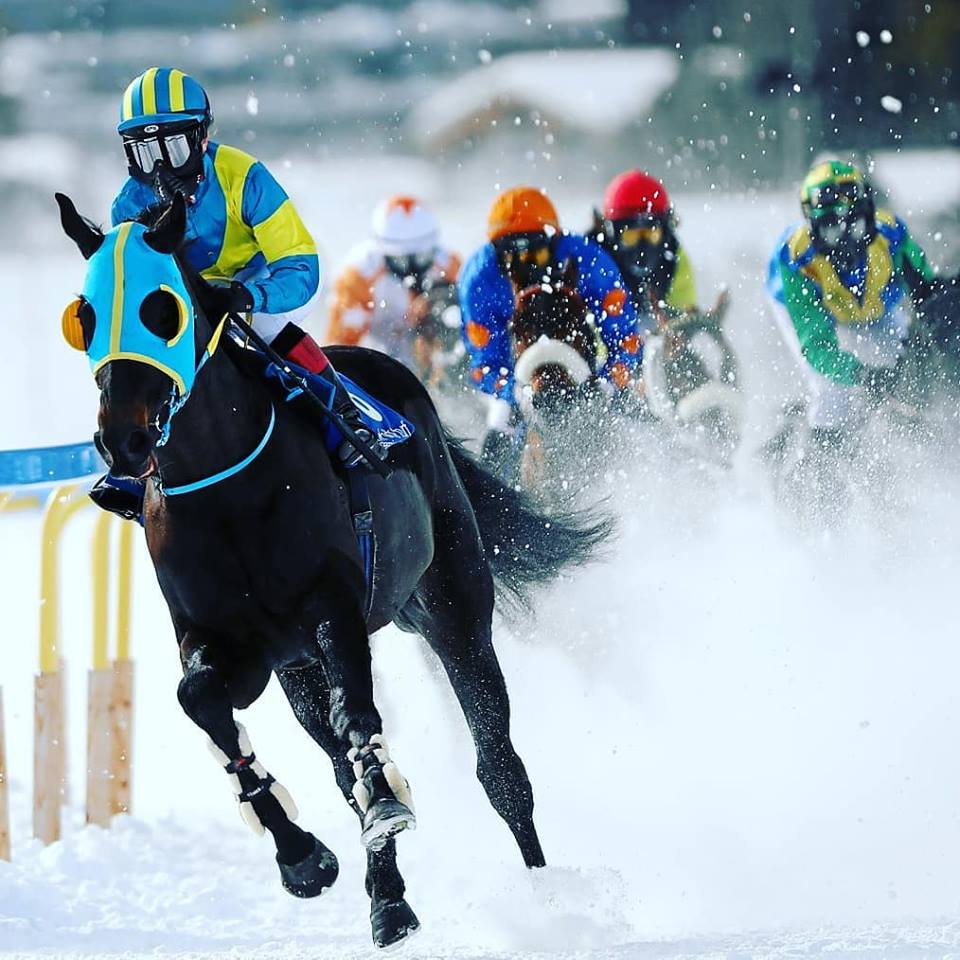 If you would like to experience something unique and exciting, then White Turf is just for you. Every February people from all over flock to St. Moritz to either watch or participate in these crazy horse races.

Sure, horse races are exciting on their own, but the fact that these races happen on top of a frozen lake adds a whole new dimension to it. That, combined with some live music, art exhibits and people spotting, makes it entertainment for the whole family! 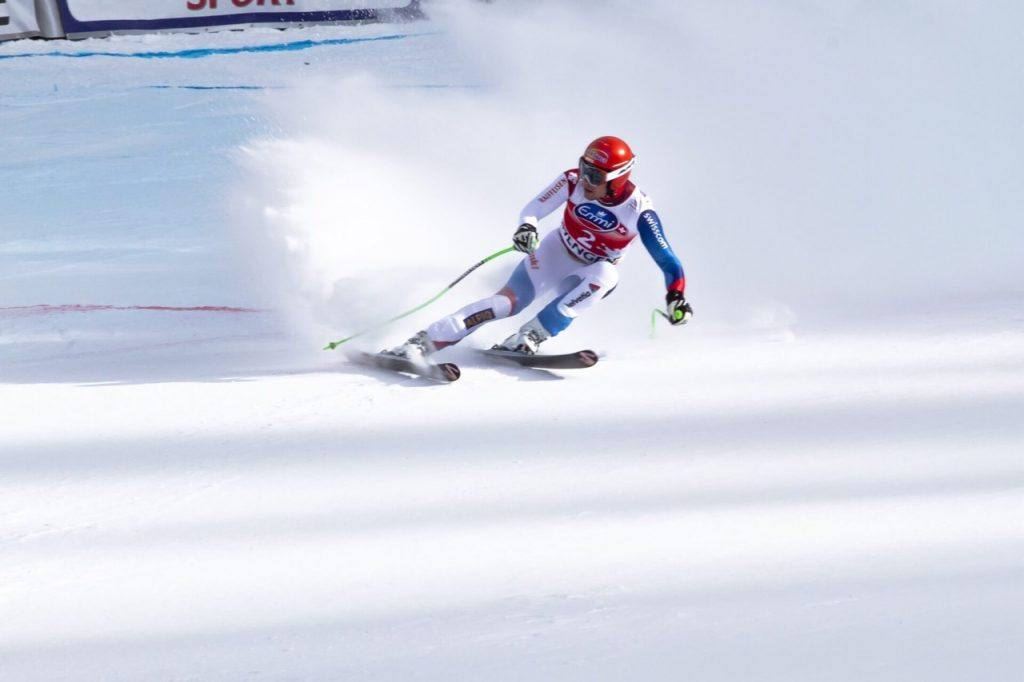 Every January, the village of Wengen is the home of one of the most prestigious skiing competitions in the world – the World Cup. The event attracts more than 30,000 people, and it includes 3 skiing disciplines: slalom, downhill and combined.

If you love skiing and want to catch a glimpse of some famous ski racers in person, this could be just the ticket. Your jaw will literally drop as you watch them take on some of the most difficult sections of the Lauberhorn downhill, such as the Haneggschuss or the Russisprung.

And, even if you are not that big a fan of skiing, it is worth a visit solely for the spectacular alpine views you will find in the Interlaken region. 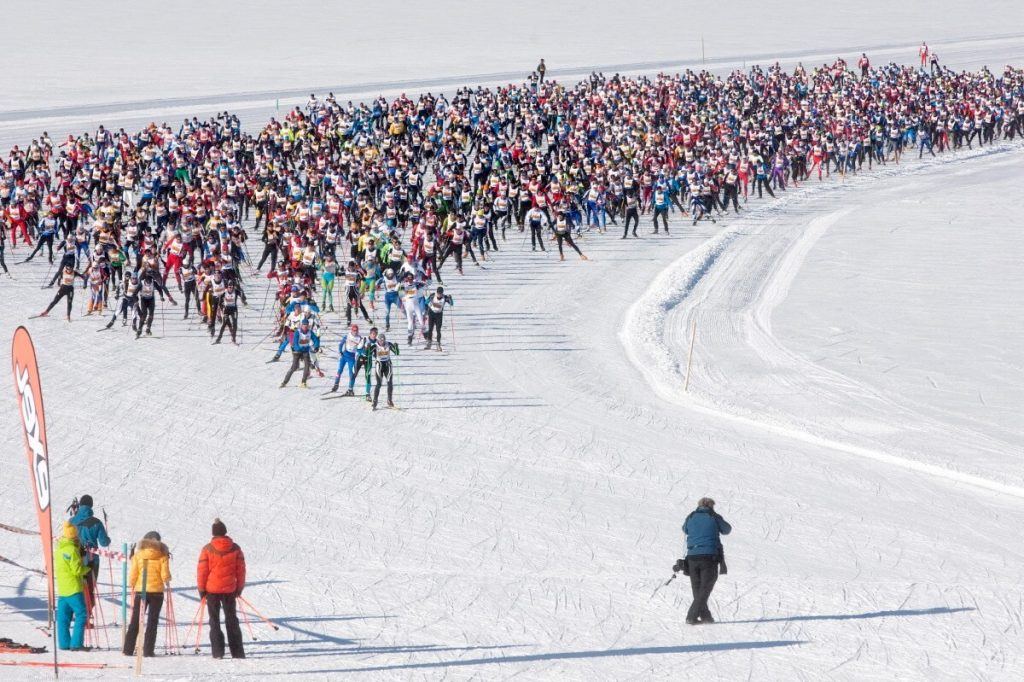 This year, the Engadine Ski Marathon celebrated its 50th anniversary. It attracts a mind-blowing 11,000-13,000 skiers every year, but only the fittest and fastest finish it.

The 42km-long trail is something only the bravest should attempt, but the stunning views of Engadin Valley and the Lake of St. Moritz are easy for everyone to enjoy.

So, if you are feeling brave and fit, you have a year to decide because the event is already over. However, get in early and you will get a nice discount!

Weltklasse translates to World Class in English; a word perfectly apt to describe the amount of talent that one can see at this sports event. Usually held in the latter half of August, this is an invitation-only track and field meet that attracts the best athletes to Zurich.

So much talent ends up here that more than 20 world records have been set at the event, which is often referred to as the “one-day-Olympics”.

And the best part about it is that it is held in Zürich, the largest and one of the most beautiful cities in Switzerland. If you do attend this amazing event, be sure to make the most of your time in Zürich and grab some stunning photo-ops! 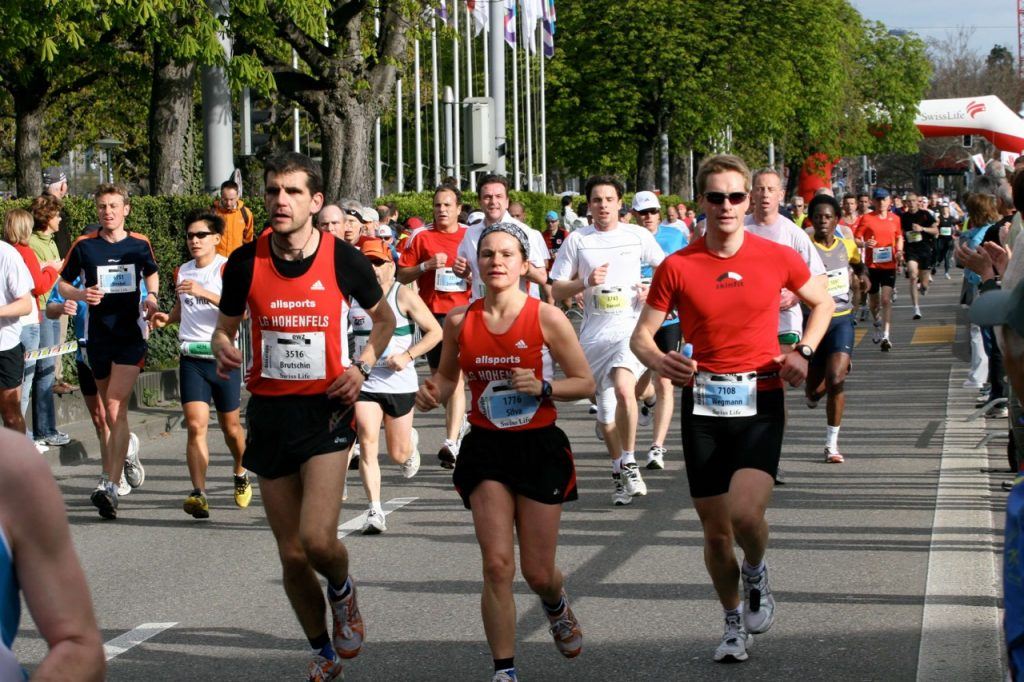 The Zürich Marathon is also an annual event, and it is usually held in April. Lucky for the participants, because the mild Zürich weather makes this the perfect time for such a grueling event.

Runners have a choice of 3 different categories – the Zürich marathon, the Cityrun and the Teamrun. The first category is for the most ambitions runners, and takes the runner on a gorgeous route from the city to the shores of Lake Zürich.

The less “keen” runners can compete in the 10km long City run, and the Team run is a great activity to do as a group! And with several thousand participants each year, it remains one of the best-organized marathons in Europe. (The Swiss are nothing if not organised :>) 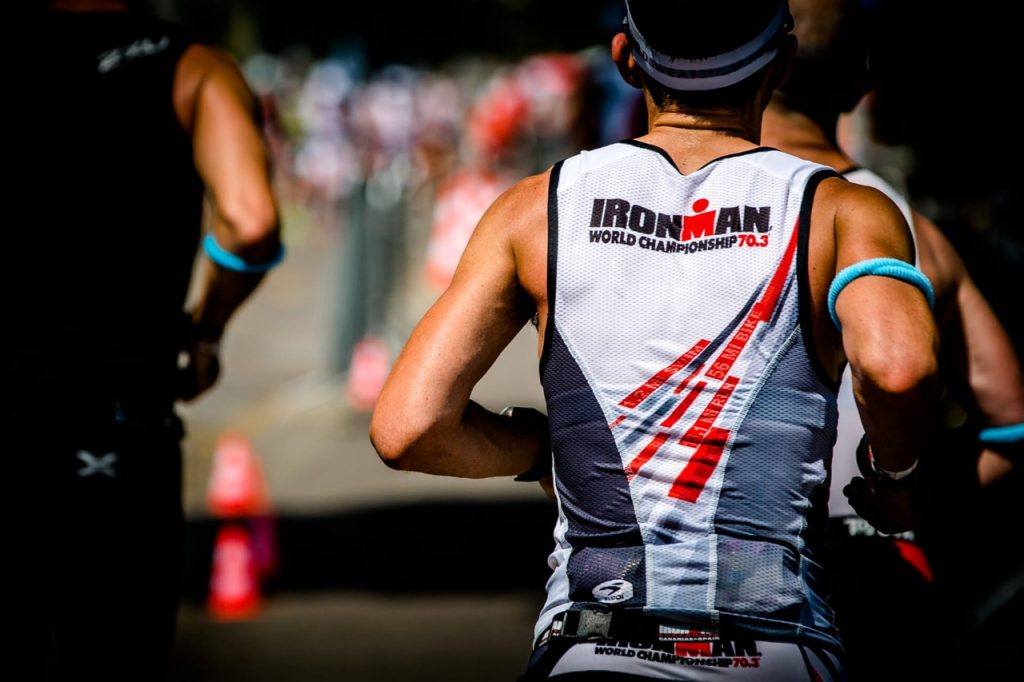 Although it only began in 1997, the Ironman in Zürich has become an annual highlight on the circuit. Not only is it filled with stunning scenery, this event is also considered one of the most difficult in the world.

Want to know why? Sure, Ironman Zurich has the usual three disciplines: swimming, cycling running. But some of the sections of the ride, including the aptly named “Heartbreak Hill” and “The Beast” will leave many failing to finish (despite the encouraging cow bells on the sideline).

The Ironman is definitely not for the faint of heart, but spectators are always welcome and even encouraged. So, if endurance-testing sporting events are your thing, and you don’t mind some awesome scenery while you are at it, this is one to put on your list 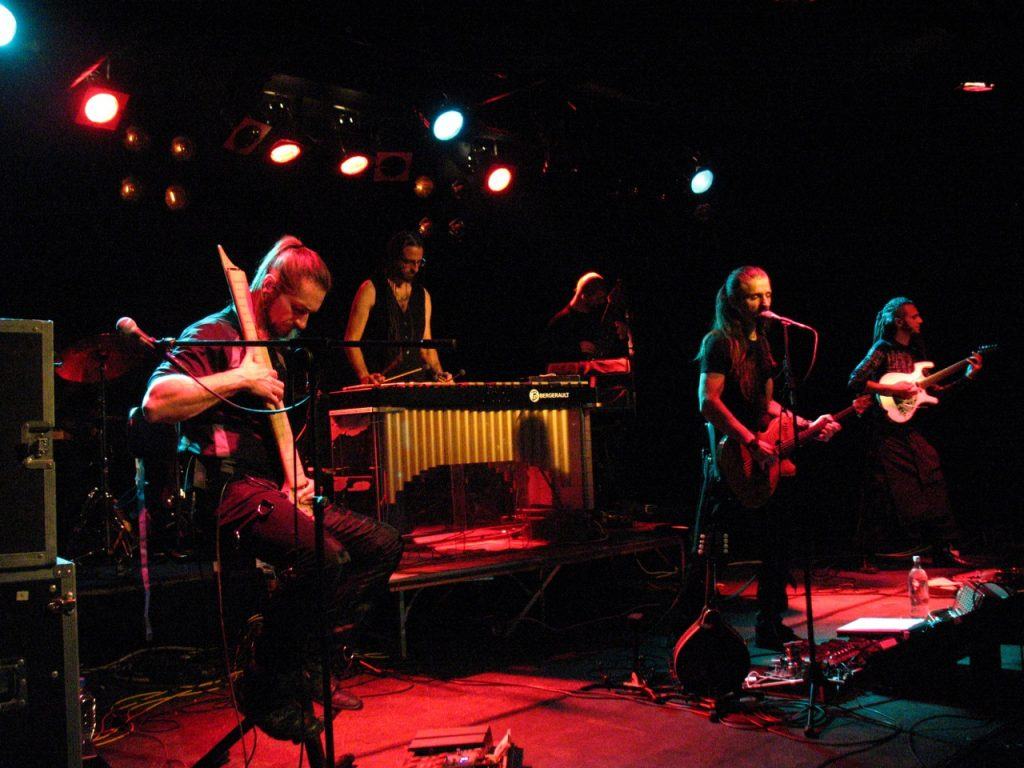 Each year, the mountain and vineyard-lined shores of Lake Geneva are home to the second largest Jazz Festival in the world. Back in the day, the Montreux Jazz Festival hosted some of the most famous Jazz musicians around. You might recognise such names as: Miles Davis, Nina Simone and Ella Fitzgerald, to name just a few.

In the latter half of the 20th century, the festival broadened its scope and began to include rock, soul and blues artists including: Led Zeppelin and Pink Floyd.

With Elton John as the headliner, this year’s festival will run from June 29 to July 14, and you can still get tickets. Hurry though; they sell out pretty fast.

With nearly a million participants every year, the Street Parade Zurich is the largest techno party in the world. This year’s parade will take place on August 11, so you better start planning now if electronic music is your thing! The party starts at 1PM and lasts for about 11 hours, which is plenty of time for the massive dance trucks to cover the 2.4km route around Lake Zurich.

There will also be 7 stages with hundreds of different DJs including some headliners like: Tale Of Us, Joseph Capriati and Loco Dice. 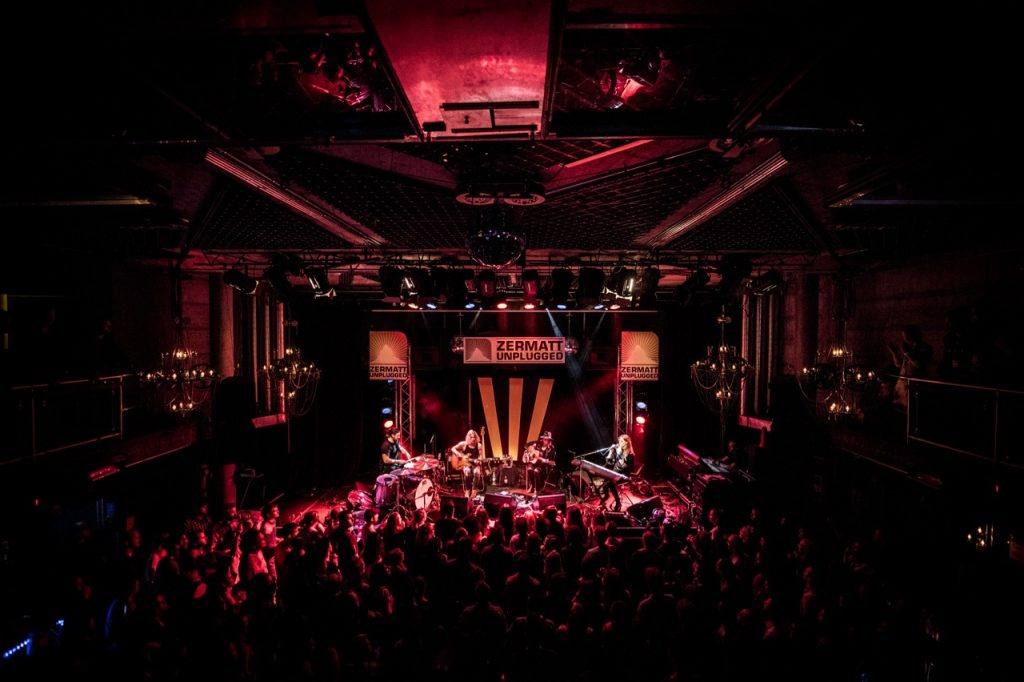 As you can probably guess from its name, this festival is an acoustic only music festival. In fact, Zermatt Unplugged is the only event of its kind in Europe, and because of that, you definitely want to attend it at least once in your life.

Zermatt is located in south of Switzerland, at the end of a stunning valley filled with huge 4000m peaks. The most famous of which is the Matterhorn. So, along with the incredible sounds, the stunning views here will bring pleasure to all your senses. Just sit back, relax and enjoy the views and sounds!

This year’s festival runs for 5 days, beginning on April 10th. And, big names such as Norah Jones, Emeli Sandeé and Gary Davies are just a few that will makes these 5 days something you will never forget. 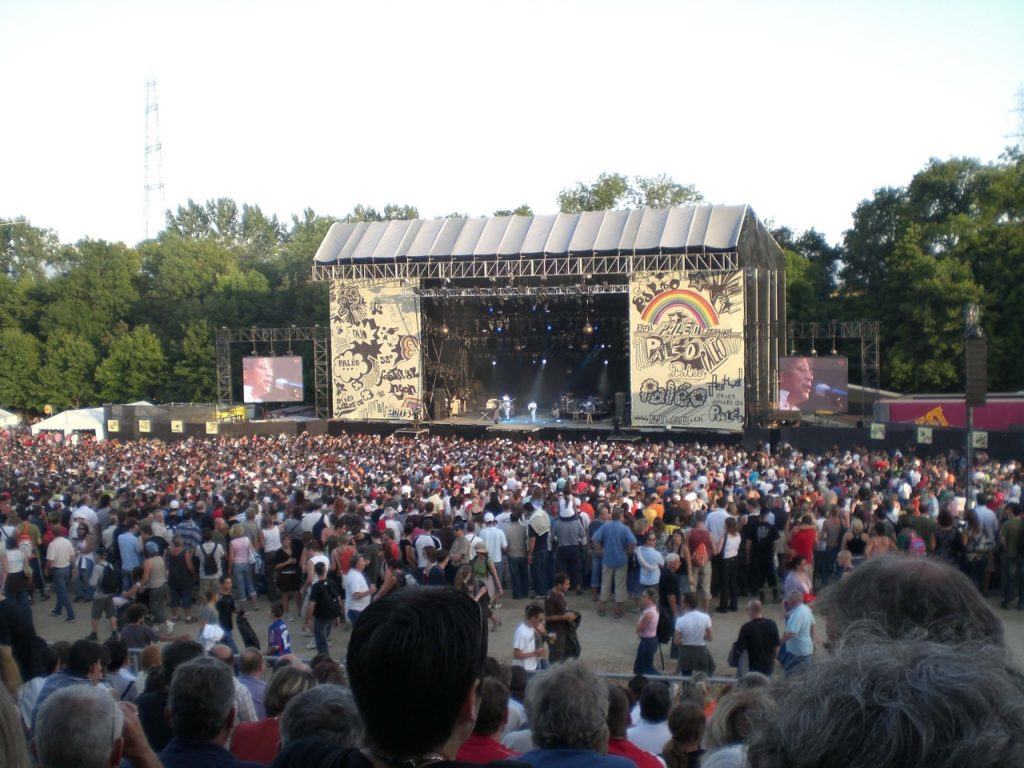 Paléo is one of the biggest open-air music festivals in Europe. It’s probably on the bucket list of every true Rock lover, and it hosts some of the biggest names from the genre on its 6 epic stages.

The event lasts for 6 days and usually begins on the last Tuesday of July. This year, the Paléo will begin on July 17 and it will last until July 22.

Surprisingly, this year’s lineup still hasn’t been announced, but judging by last year’s headliners (Red Hot Chili Peppers) it will be well worth the wait. If you want to find out who will perform in Nyon this year, you will have to wait until March 20.

Other Noteworthy Festivals In Switzerland 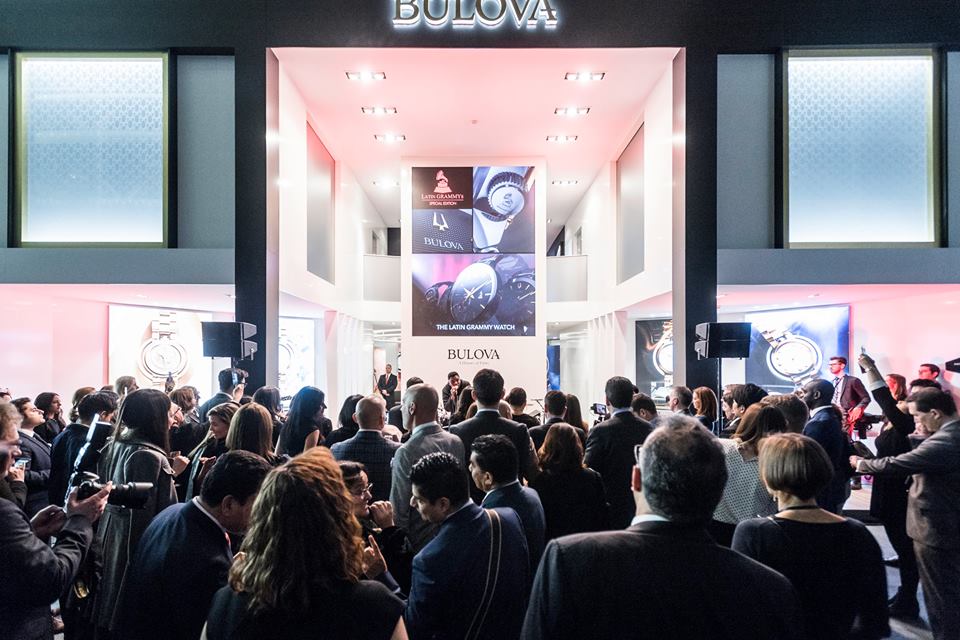 If you are a fan of luxury then this event is an absolute must. From March 22 to March 27, more than 1500 exhibitors from both the jewelry and watch industries will present their latest collections and designs for 2018. Such brands as: Chanel, Rolex, Bvlgari, Balmain, Breitling and many more will tantalise you with things you can only dream of affording!

This annual event is held in Basel; a multicultural city located at the intersection of France, Germany and Switzerland. So, while you are here you can visit one of the best cities in Switzerland at the same time. 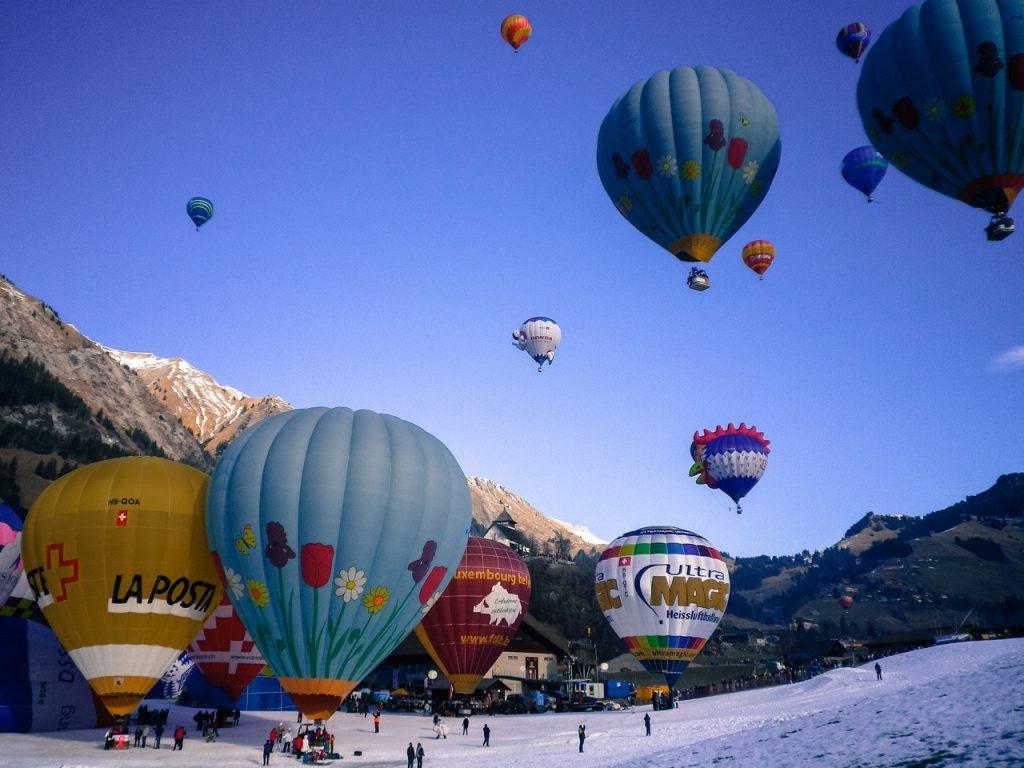 Every January, the International Hot Air Balloon Festival attracts hundreds of colorful hot air balloons (and their pilots)to the picturesque town of Château-d’Oex . The highlight of this event is the ‘Night Glow’, the sound and light show that includes fireworks and some 20 light-filled up hot air balloons. You have 9 days to make it to this even, with the ‘Night Glow’ taking place on the 7th day.

The best thing about this event is that, for a, ahem, “small fee”, anyone can go for a ride in one of the balloons and enjoy the mesmerizing panorama of the alps around Chateau D’Oex.

Quintessential Switzerland: In The Bernese Oberland Region Of The Alps

Roger is an obsessive traveler and lover of the outdoors. Originally from Australia, he is now living in Switzerland where he spends most of his time traveling, hiking, mountain biking or flying his Mavic Pro drone. You can find him on his blog or on Twitter.