Caroline Buchanan has been competing at the highest level of BMX racing and mountain biking for over two decades. She represented her country in BMX at two Olympic Games, London and Rio and is considered one of Australia’s most popular female action sports athletes, winning accolades such as the Australian Athlete of the Year.

Caroline will discuss growing up in Canberra and getting into BMX at 5 years old. Why she moved to the action sports capital of Temecula, California and the reason she returned home. What drove her to have a successful race career winning world titles in multiple sports. How she has stayed mentally focused, physically prepared and coped with the ups and downs of being a professional athlete in the limelight.

Caroline will talk about the importance of having mentors when she was younger and how she is mentoring future generations of female athletes. Her current focus on freeride mountain biking and accomplishing world firsts on a mountain bike, her legacy to riding and so much more!

Oli Russell-Cowan: Was the initial reason to go to California to be immersed in it and surrounded by the scene, so to speak.

Caroline Buchanan: Yeah, it definitely was. At the time I didn’t have your clothing sponsors, your helmet sponsors all these things. So a lot of that Bell, Oakley, that industry, Maxxis Tires, they’re all there.

So to be able to call in and be a bit more present made a big difference to the start of my career. 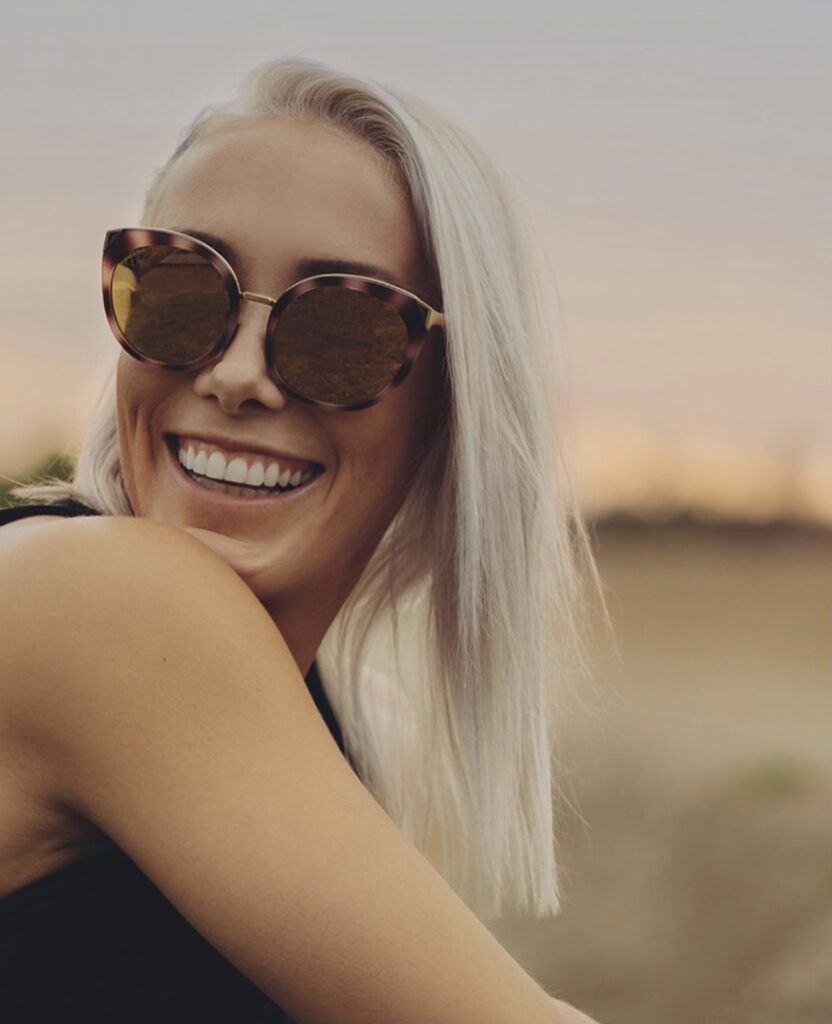 Growing up in Australia

Oli Russell-Cowan: Growing up would you say you were exposed to all these different sports super early?

Caroline Buchanan:
Yes, so early. I’ve always said that to any parents with kids. I’ve said to them,

Don’t specialise in one sport at an early age.

I think that was one of the biggest foundations that set me up for a diverse BMX, mountain bike multi-discipline career was when I grew up in Canberra, I did everything we lived opposite a pine forests.

I started golf at a young age. My dad played golf. So between golf, tennis, Taekwondo.

When I was nine, I had to decide between a black belt in Taekwondo and to go to the BMX World Championships in Paris. I was basically just doing every sport. I strongly believe getting that foundation of skills and movement. Also not burning out quite young, too, because I was five when I started racing. If I’d done that for 30 years, then it would’ve be a long career.

Camberra was a really good foundation. It was the capital of Australia, but a much smaller city. The ACT Academy there was a feeder into our Australian Institute of Sport. So I really had that pathway right in front of me to go from the state level to the national level, to the world level and have those resources to be in gyms early at 14 years old. Getting the foundations of training and structure and everything like that. It really was a nice stepping stone through. 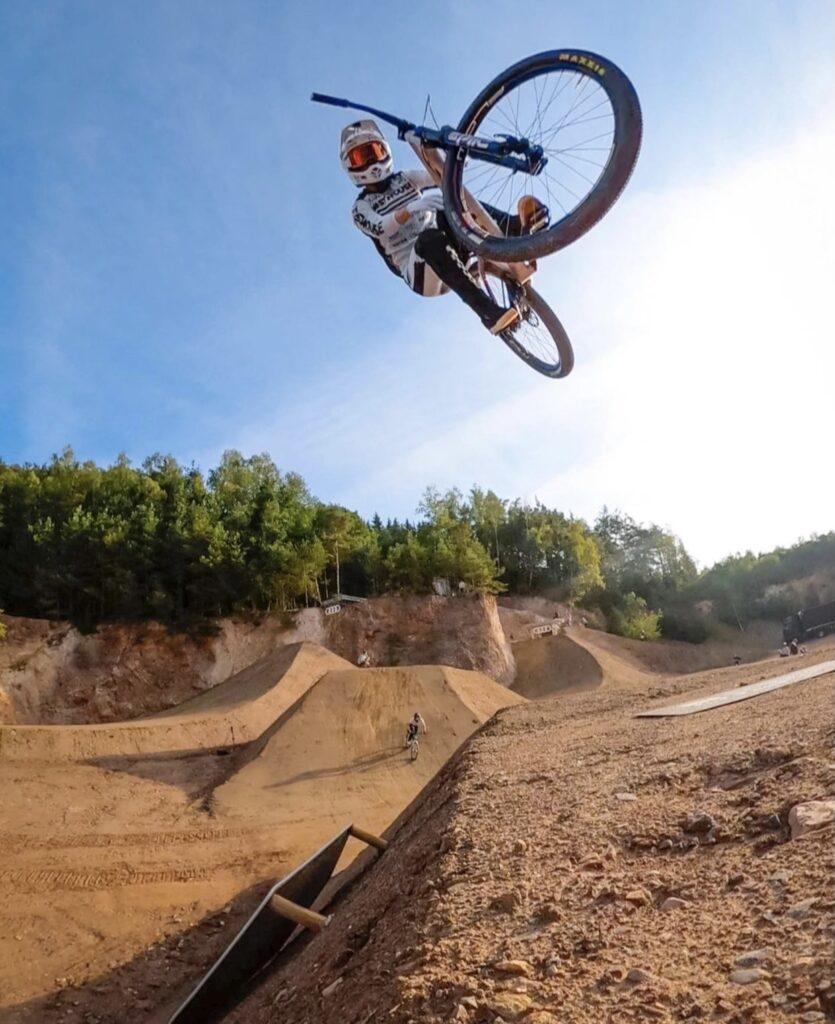 The Appeal of Individual Sports

Oli Russell-Cowan: What was the appeal of individual sports? Looking at cycling what stuck out there?

Caroline Buchanan: I think for me as a kid, I was three years old. We went to the video store back then. And my mom said, we’re walking down the aisle. And she thought that I was going to pick out this Disney film and I picked out Nadia Comăneci’s Perfect 10, I was doing gymnastics at the time.

She thinks why does this three year old want a documentary on anOlympic gymnast. And she said I was just fascinated by it and I would just watch it over and over and over again.

So my parents kind of knew quite early like this girl is maybe a high achiever, maybe she’s going to interested in sport. From then, like in soccer, I was always playing team sports, but I struggled with the fact that I wanted to score the goal and I wanted to save the goal. Once I really found BMX riding, the individual aspect of knowing that success is on you and failure is on you. I love that pressure. I love that heat of the moment.

So I wasn’t really a team sport person. I really liked that ownership and the fact that,

With individual sports, you could really be creative and create your own identity and career out of it.

Luckily today with social media and everything else, it’s been a real blessing to be an individual female athlete, especially in cycling. 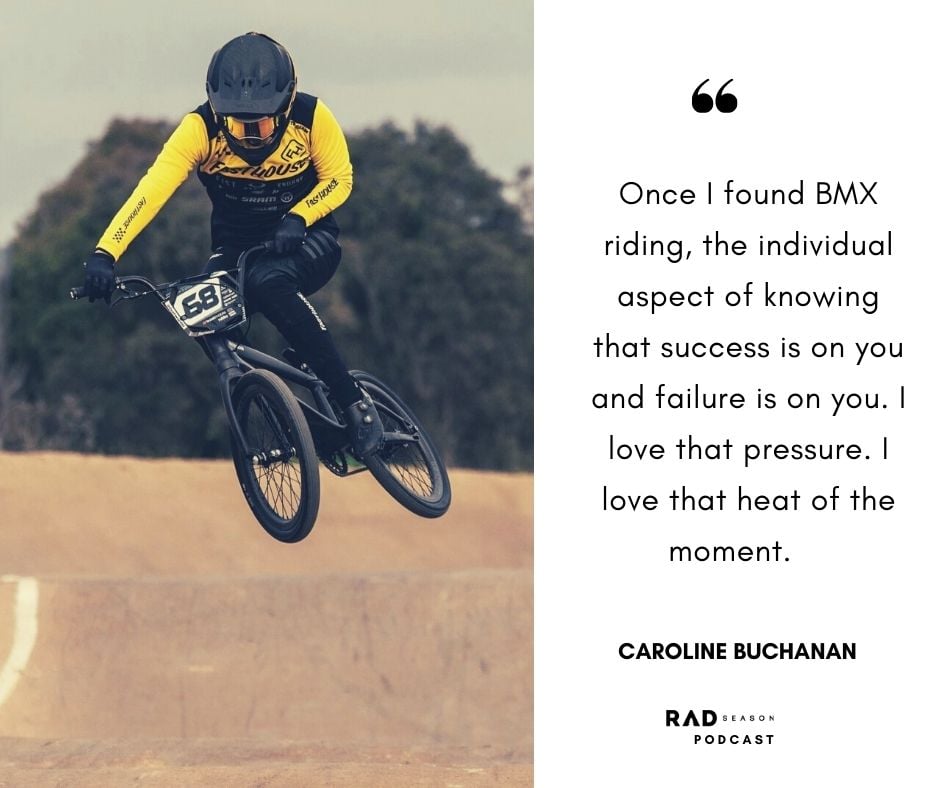 Oli Russell-Cowan: Who did you look up to back then?  Your brother was into BMX as well, right? Was there a group of you at school doing it?

Caroline Buchanan:
No, it was all the boys. When I actually started at five years old at my local track, there was no girls. So up until the age of 13, I really raced the boys. I even travelled over here to New Zealand for Mighty 11. So it was like a Trans-Tasman, Australia versus New Zealand. I was just in competing with the boys back then.

Luke Madill and some other Olympic Australian athletes they were my heroes back then. It wasn’t until I was about 16, that I really started getting support from other female athletes and role models.

So to me mentors like Layne Beachley, they were the ones really at that turning point of becoming that 14 year old girl that’s questioning, do I really want to do sport for my career in the long term or do I want to chase boys in school and all these other distractions.

Layne Beachley called me up one day, and she simply said, ‘I believe in you.’ I’d won one of her scholarships. Not only that financial aspect, it was more the fact that a seven time world surfing champion called me and just said, I believe in you, and I’m here to support you.

She stripped away a bunch of limiting beliefs for me really early, because she actually said, you’re gonna win world titles.

Layne said,  ‘I’m here with you all the way along, and I can’t wait for you to win eight.’ I looked at her and said, ‘Eight, how am I going to be you? You’re my role model.’ It was really funny story when I did win eight I came back to her and said, You know what, I think you planted that seed in me, just to believe in myself. I never thought I’d do it.

She was pretty stoked to share that moment together.

Rad Season is providing you with rentals and hotels at the lowest prices available online. Book your stay near Canberra, Australia using the map below!