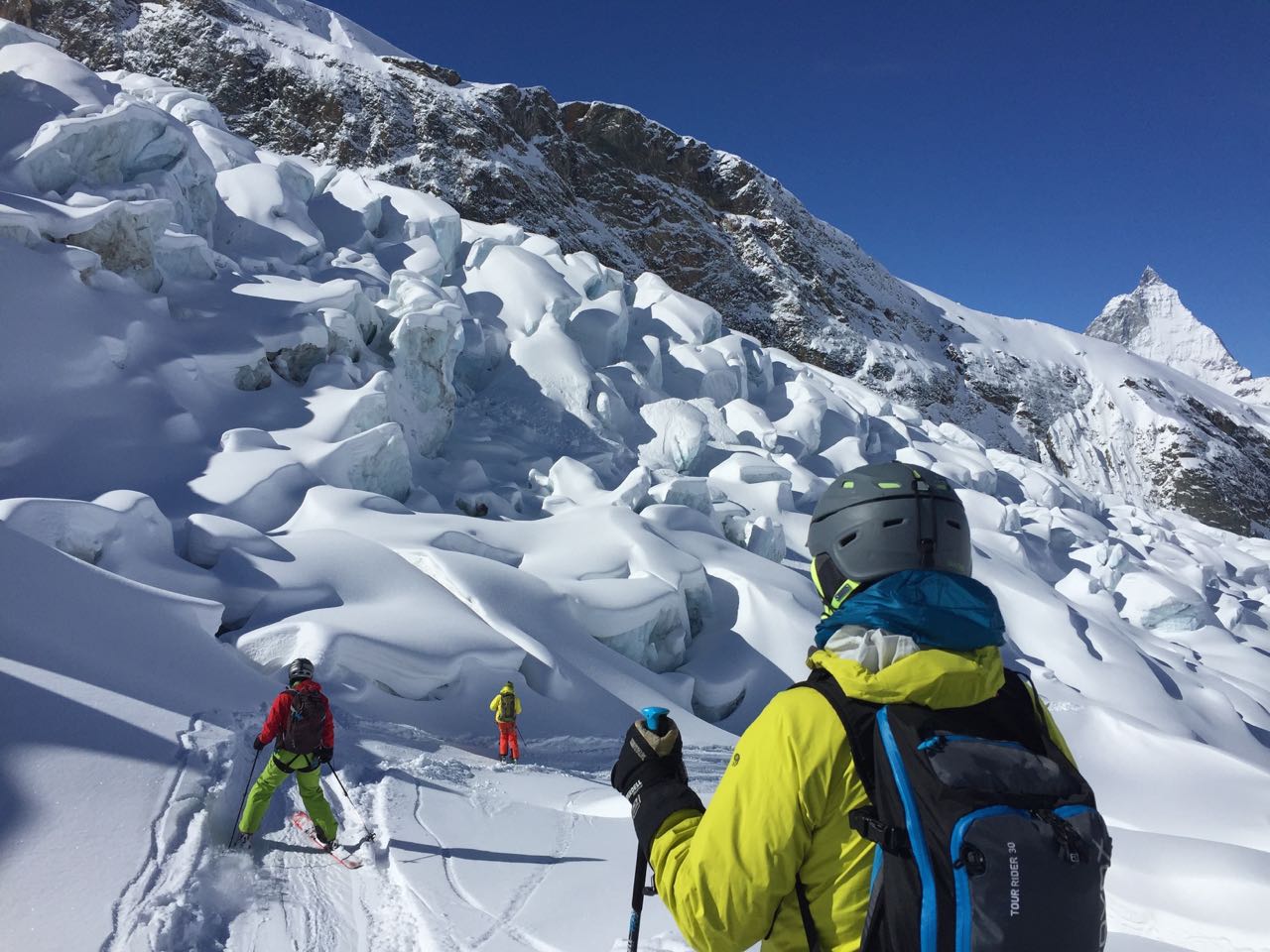 Inside Guide To Skiing Zermatt

Alf Alderson heads to one of skiing’s iconic sites where the ski season goes on forever.

Hell, where the end of my arm should be is all but white too. So why, you may reasonably ask, am I trudging upward on skins towards 3479-metre Testa Grigia, some 1800 metres above Zermatt (which needless to say is also lost in whiteness)?

Here are the four reasons

It’s an alternative to skinning up the lost-in-the-clouds, 4164-metre Breithorn, which was the day’s original plan;

I’m in the company of local ski fanatic Ed Mannix who would probably try and skin up the Empire State Building if it had snow on it – he’s making me do this;

There’s a refuge at the top of Testa Grigia, the Refugio della Guide del Cervino, which serves plain, wholesome Italian grub; Ed is dangling this before me like a carrot;

It’s better than sitting at a computer screen…

Zermatt and the Matterhorn are, of course, two of the most iconic locations in the skiing world. Zermatt drips with climbing and skiing history, and no matter how often you ski beneath the Matterhorn it never fails to impress. 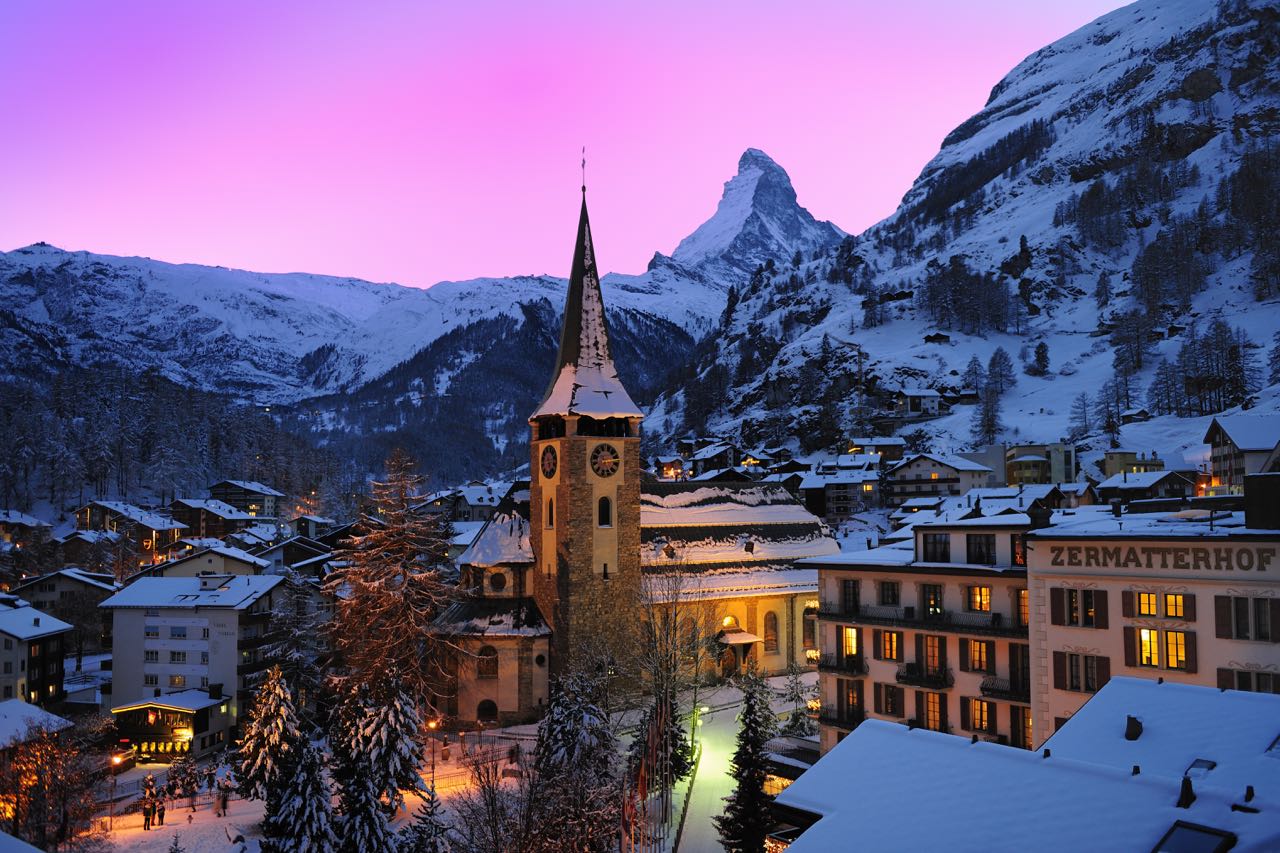 I’m here in mid-May, when pretty much every other ski town in Europe has brought the shutters down on skiing and is moving into mountain bike mode.

‘Not Zermatt though -you can ski here all year long due to its glaciers and literally breathtaking altitude’.

The very whiteout we’re skinning through has deposited around 150cm of snow in the last few days, and when the weather starts to clear the following day I get to hit the pistes in conditions more akin to February than May.

Ed’s original plan to hike up the Breithorn remains on hold though due to high winds and poor visibility at higher elevations. This is a shame as it would have been my first 4000-metre peak on skis, but the vast amount of pisted terrain that you can still ski even in May prevents us from being too downhearted.

We head over to Cervinia in Italy, linked to Zermatt by an impressive array of cable cars (make sure you’re in time for the last one back though; if you miss it you’re looking at €300 for the taxi back to Zermatt) where the sun is starting to break out.

It seems appropriate that the cheery atmosphere of sunshine bursting through clouds onto fresh powder is accompanied by the hubbub of Italian voices gabbling excitedly over the top of one another as we await the cable car back up to Testa Grigia. As Ed points out

“You can always tell you’re in Italy from the noise!”

Being part Italian himself I guess he should know… 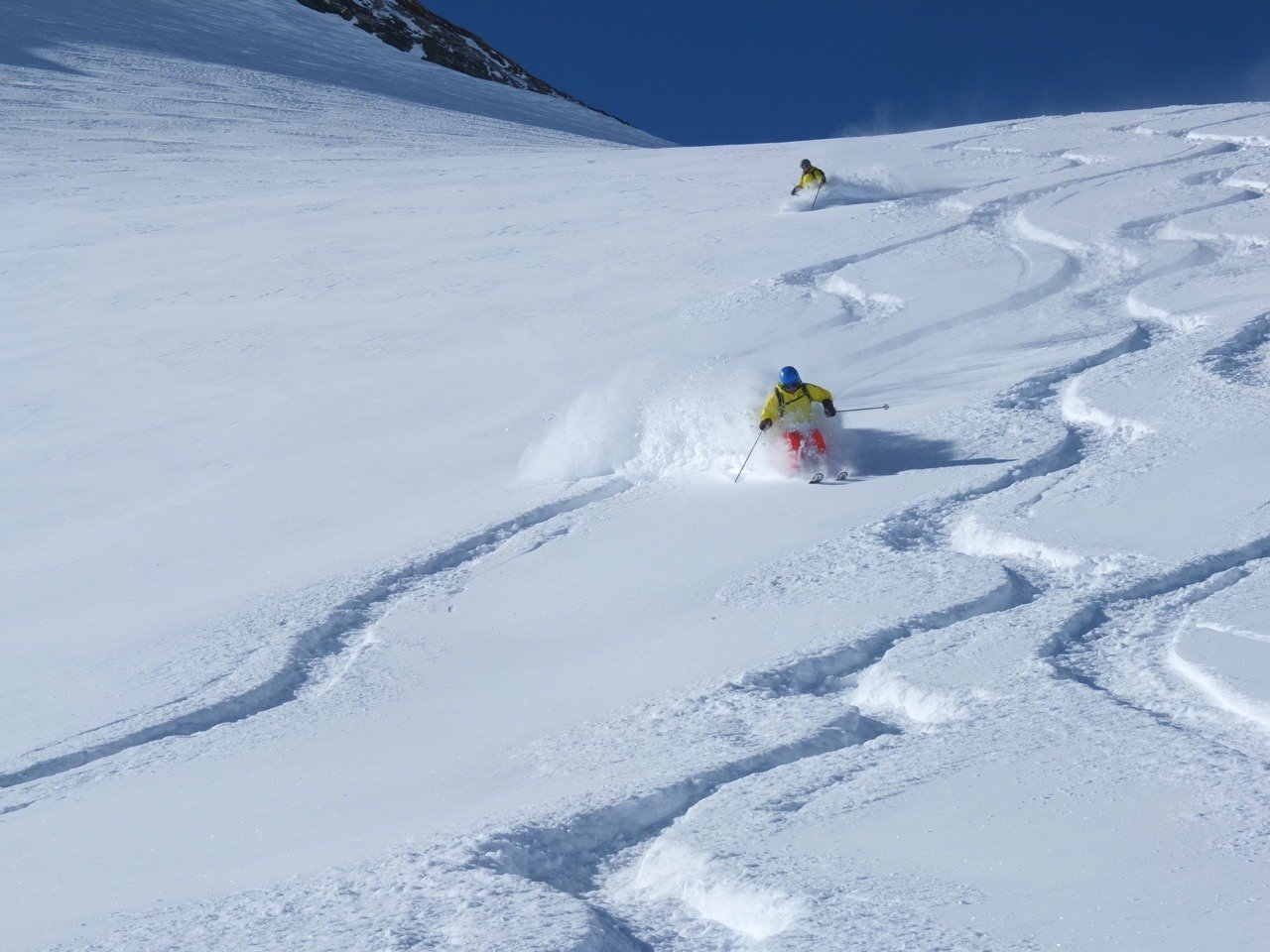 Got to love powder days in May. Photo: Ed Mannix

Ed is a man to be envied. A Zermatt resident, when not ski touring he runs Matterhorn Chalets, offering upmarket chalet accommodation packages which also feature six days skiing with a UIAGM mountain guide to help you explore the iconic peaks that look down upon Zermatt. Said guide, Andreas Fux, is Zermatt born and bred and from a family of mountain guides, so you really couldn’t find anyone better to follow around the mountains.

After another lunch in Italy, we head back down the slopes to Trockener Steg on the Swiss side of the border as the sun starts to make regular appearances, and there begins to develop the feeling of a ‘presence’ over my left shoulder as the unmistakable outline of the Matterhorn gradually begins to emerge from the cloud and mist.

‘Probably the most famous mountain in the world’

It was first climbed in 1865 as teams of climbers from Britain and Italy, massively aided by local guides, competed to be the first to reach the improbably pointy summit. 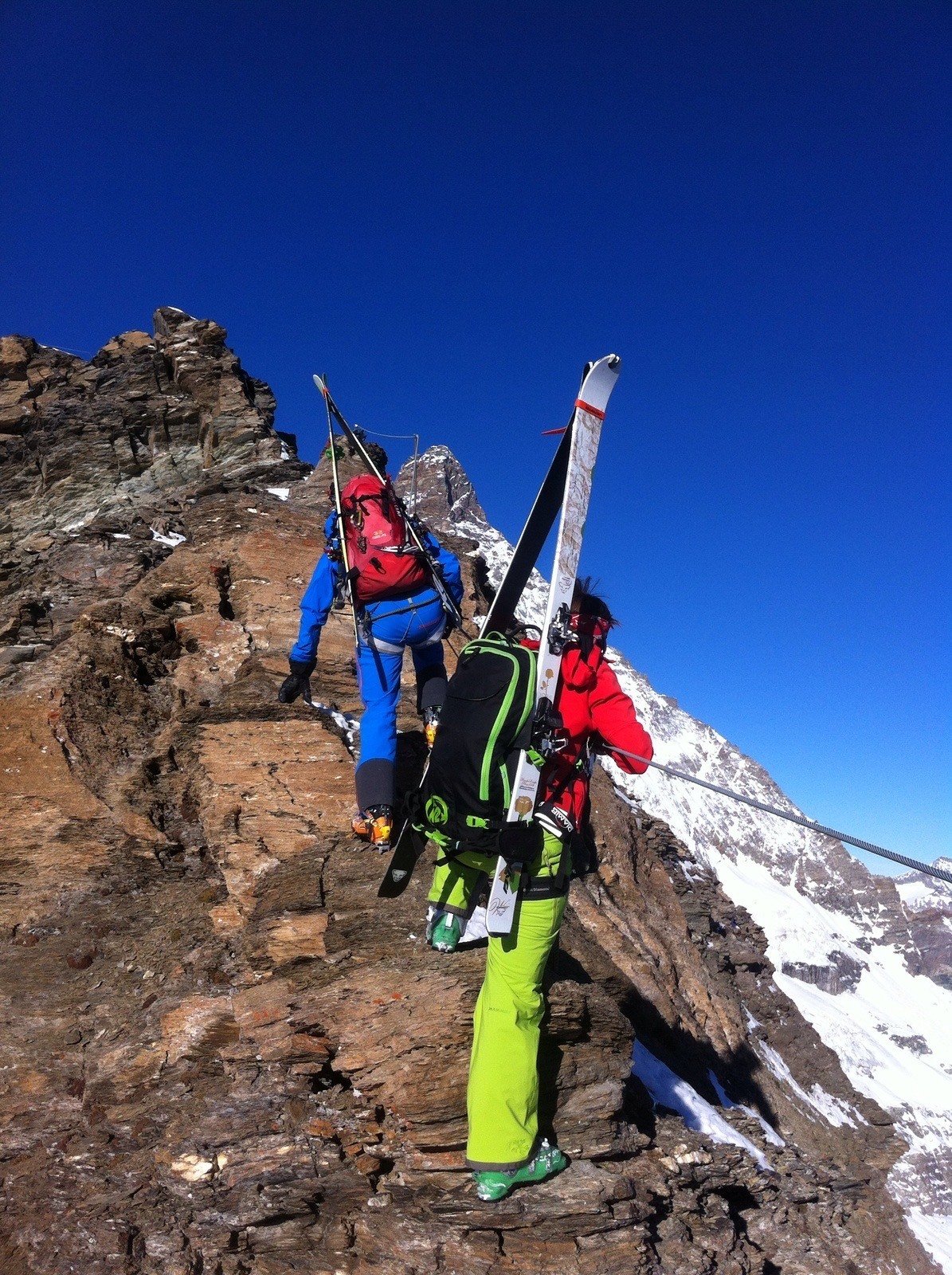 Climbing up with skis to get the best line. Photo: Ed Mannix

The Brit team narrowly made it, led by the irascible Edward Whymper, but at a massive price – four of their party of seven died after their climbing rope snapped, and the body of one, Douglas Hadow, still remains somewhere on the mountain. You can see the infamous rope along with other ancient climbing gear in Zermatt’s fascinating museum, which is well worth a visit on a down day.

By my third and final day in Zermatt the weather is a good as it ever gets for a skier in May.

‘Brilliant blue skies, bright sunshine and ice cold air all topped off by some of the most spectacular mountain scenery in the Alps’.

I had to take the train to Geneva early afternoon so we still couldn’t skin up the Breithorn due to lack of time, but no matter – it’s hard to find fault with hooning down the pistes into Cervinia and Zermatt on a sunny Sunday morning.

And not having been able to get to the top of the Breithorn did have one positive aspect to it – I have the perfect excuse to go back to Zermatt again.

Head to Zermatt.ch for the resort information.

Rad Season is providing you with rentals and hotels at the lowest prices available online. Book your stay near Zermatt using the map below!