The Ultimate Guide to Axe Throwing 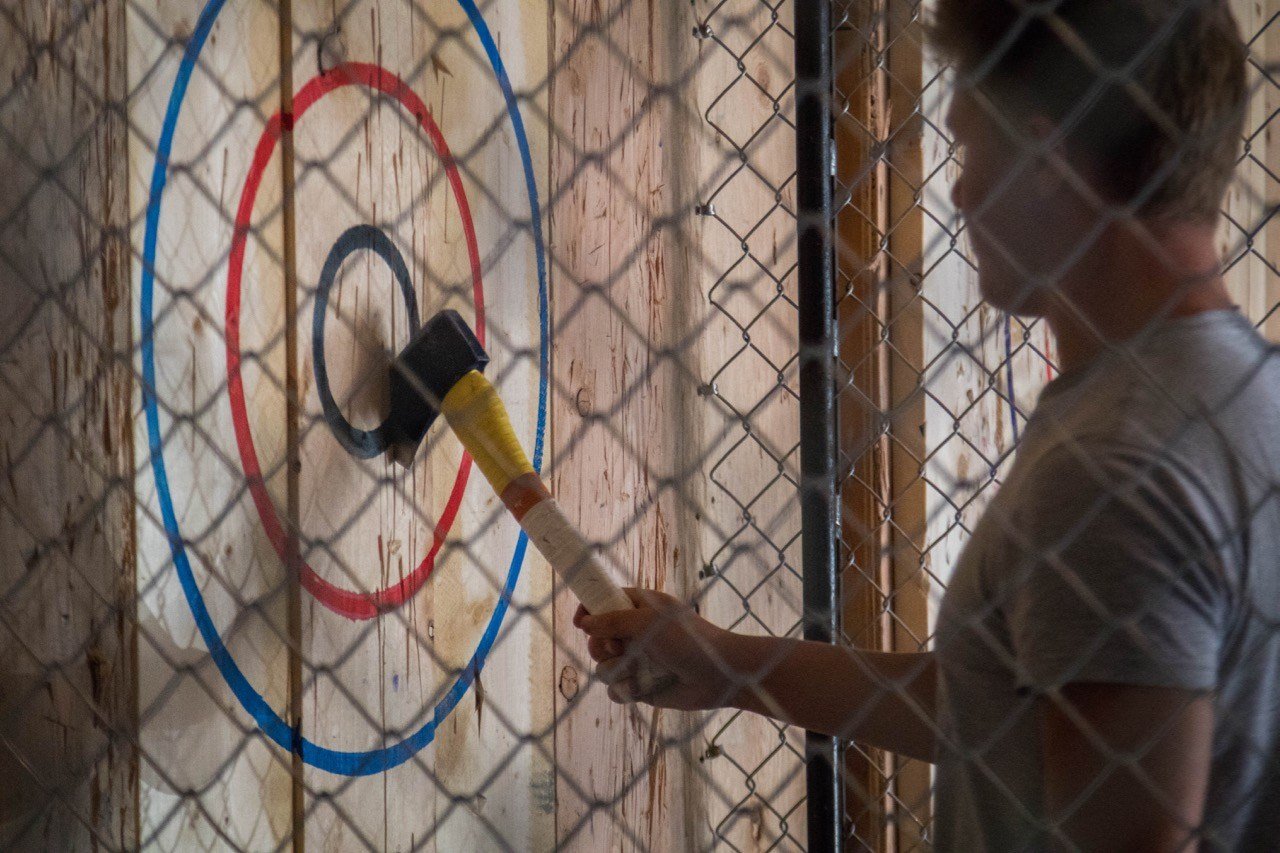 Everything you need to know about Axe Throwing

Canada is famous for its love of ice hockey and maple syrup, but the second largest country in the world is also responsible for a new global phenomenon – axe throwing. Quickly establishing itself as a sport in its own right, axe throwing is Canada’s exciting alternative to darts.

While axe throwing as an actual sport is fairly new, the practice of hurling a hatchet (axe) at a target is as old as the lumberjack himself. While there are reports of the ancient Celts throwing axes, the craze truly took hold during the early 19th century when Canadian lumberjacks threw axes at targets as a way of passing time during gruelling forest stints.

Over recent years axe throwing has enjoyed something of a social resurgence, exploding in popularity as a fun group activity. Popular as an alternative après-ski activity in mountain resorts, as a bachelor/stag or bachelorette/hen party, and even as a fun corporate team building activity, axe throwing really is for everyone.

As love for axe throwing has grown, so too have the aspirations of those involved within the sport. Today, professional bodies oversee the rules and competition formats, and the sport has real Olympic aspirations that could one day come to fruition.

Here’s an essential guide to this intriguing timber sport.

The rise and rise of the axe throwing bar… 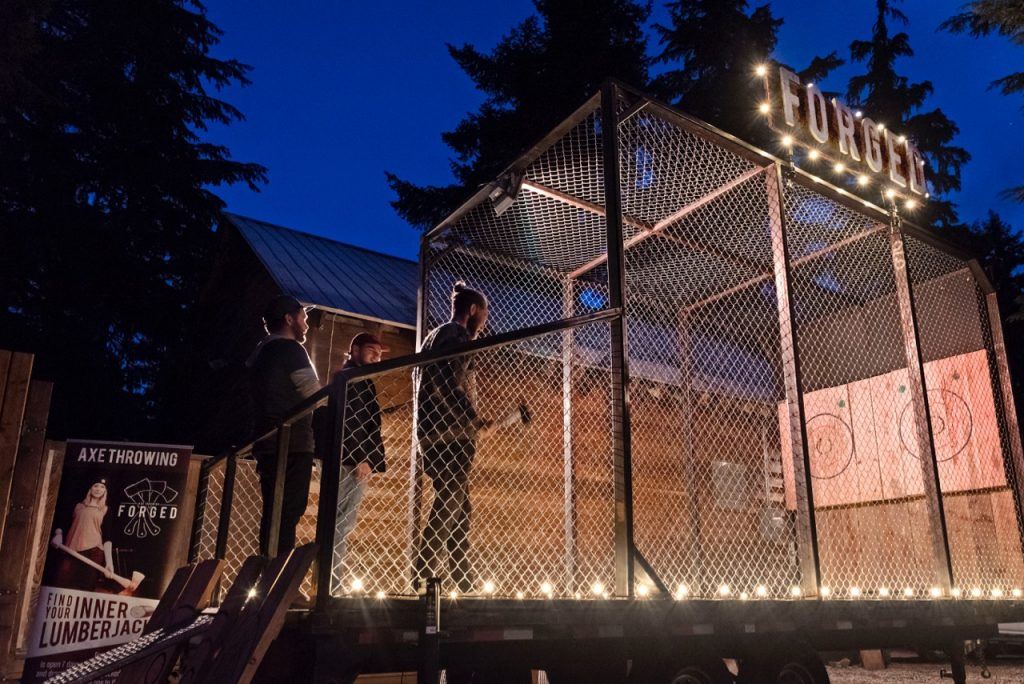 After throwing axes with friends in his own backyard and experiencing the power of the axe in creating a sense of community (and competition), Torontonian Matt Wilson established the Backyard Axe Throwing League (BATL) in 2006. The league quickly grew, with new throwing venues opening across Canada. Today, BATL has enabled over 1 million people to enjoy the thrill of axe throwing across their various locations in addition to being one of the founding members of the National Axe Throwing Federation (NATF).

Fellow NATF member, Whistler’s Forged Axe Throwing opened its doors during early 2017 bringing this thrilling pastime to the mountains of British Columbia – a province famed for its lumberjack, outdoorsy image! Today, the venue proves popular with those seeking an active alternative to boozy après-ski and has a thriving local’s league. In addition, the indoor venue hosts corporate events and even has an axe throwing trailer that takes the target to the players!

2018 has seen a flurry of axe throwing bars open around the world, and no two are the same. Some have the feeling of a bowling alley, while others offer axe throwing in addition to another attraction – such as a restaurant. While all seemingly cater for those wishing to try axe throwing recreationally, many also cater for those with ambition to taste success in the sport. Whether you’re looking to go all out for a bachelorette party (pinning photographs of an ex to the board in an attempt to ‘axe an ex’ is not uncommon) or put yourself in line for a potential podium place at a future Olympic Games, there’s a venue for everyone.

While each venue is different, they all have a raucous atmosphere and a love of plaid in common! 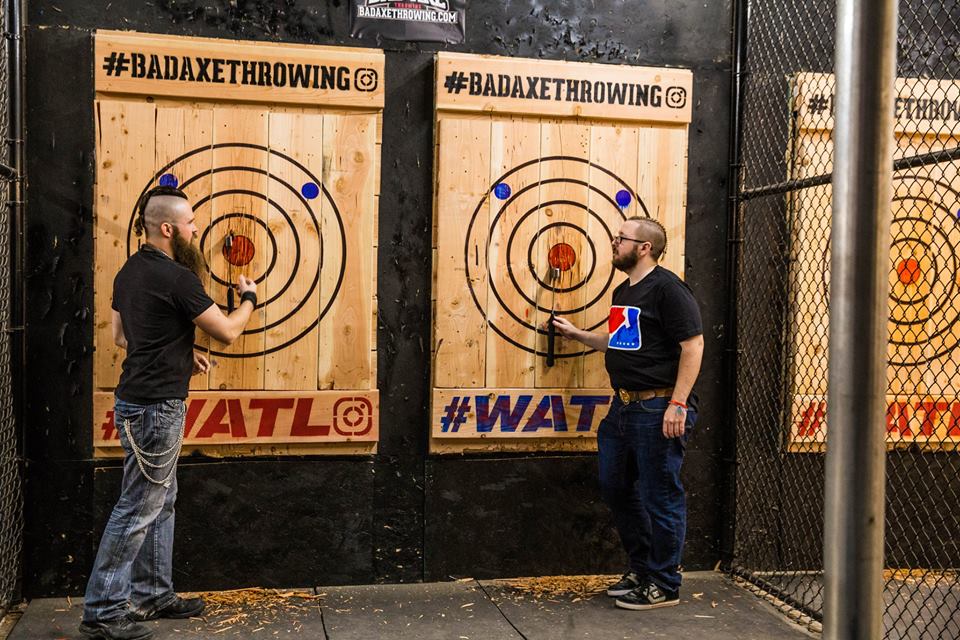 There are two major associations set up to service the sport and provide a rule-based framework. These are:

The World Axe Throwing League (WATL). Formed to unite the many indoor urban axe throwing facilities from around the world under the umbrella of one professional axe throwing association, the league also created the standards for competitions and business practices.

The National Axe Throwing Federation (NATF). With over 3000 members, the federation unifies competitors and promotes safety and fair play.

Axe throwing is a sport with Olympic aspirations. In December 2018, the top 64 axe throwers competed in Chicago to take home the trophy and earn the prestigious world title.

In addition, the various NATF leagues culminate in the National Axe Throwing Championship (NATC) each year to award the Wilson Cup and over $16,500 in prize money.

While gameplay rules may vary depending on the facility, competitive axe throwing adheres to the rules created by the NATF or the WATL.

Throwing Distance – Throwers need to stay behind the indicated line, 12 to 15 feet away from the target.

Targets – Regulation-sized targets are built from 5 vertically aligned 2” by 10” boards that are 4 feet long. The bottom should be around two feet off the ground.

In accordance with WATL, competitors each have their own throwing lane and are allotted 10 throws per match. Players are supposed to trade lanes after their first 5 throws to ensure that they both get an equal advantage or disadvantage if a target is less than optimal.

The winner is the player with the highest number of points after 10 throws. In the case of a tie, players continue to throw in sudden death rounds until a winner emerges.

Every line awards the number of points that are associated with the inside of its ring.

Many targets have small blue circles inside the fifth ring. Hitting these is known as the kill shot and is worth 10 points in the final round of an axe throwing competition.

Keeping track of the scores, leagues and tournaments is becoming easier and more professional with the implementation of scoring software like this.

Every NATF match consists of 3 rounds. Each round consists of 5 thrown axes per round. A player must win 2 of 3 rounds to win the match. In regulation matches, competition players always throw all three rounds even if one player has won the first two rounds. If a player wins the first round and ties the next 2 rounds this is still considered a match win as they have won the majority of the rounds in the match.

Players also switch lanes between rounds. Now for the scoring on the target:

– Players must declare that they are going to throw for Clutch before attempting, also known as ‘calling Clutch’.
– Players can only throw for Clutch on the 5th and final throw of the round.
– An accidental Clutch is not valid, even on a 5th throw – no call, no points.
– Once Clutch is called, only that point area is valid and all other point areas are worth zero.

What makes a great axe? 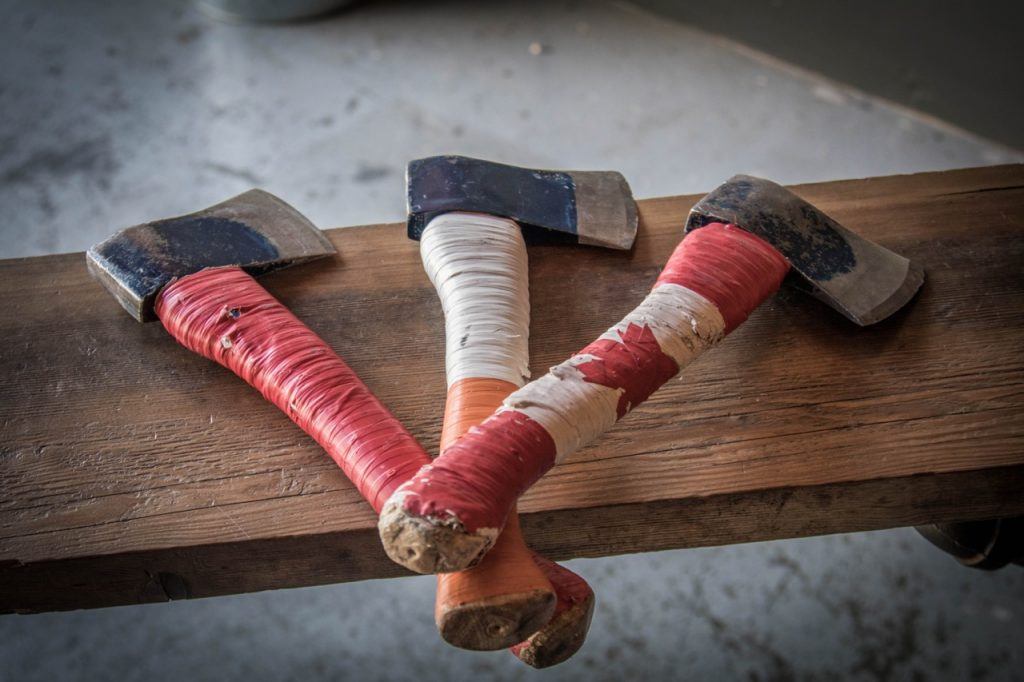 Axe heads should weigh no more than 2 pounds with the blade no longer than 4.75”. The entire axe should be no shorter than 12”.

Hatchets: Small hatchets or forest axes are the most common type of axe used in recreational throwing establishments and are essentially designed to cut through reasonably small tree branches. They are lightweight – often less than two pounds – and measure around a foot in length.

Tomahawks: Created by Native Americans for use in battle and hunting, the tomahawk is typically thinner and lighter than a regular hatchet. Like the hatchet, tomahawks are commonly used in recreational axe throwing establishments.

Double Bit Axes: Commonly used by forest workers during the 19th century, the double bit axe is something of a multi-purpose tool comprising both a hatchet axe and felling axe. This is the primary type of axe used for competitive axe throwing, and is used in the Lumberjack World Championships.

Splitting Axes: As the name suggests, this type of axe is designed to chop or split firewood. They have a sharp edge to cut along the grain of the wood, before quickly tapering out to push a piece of wood apart.

What makes a great throw? 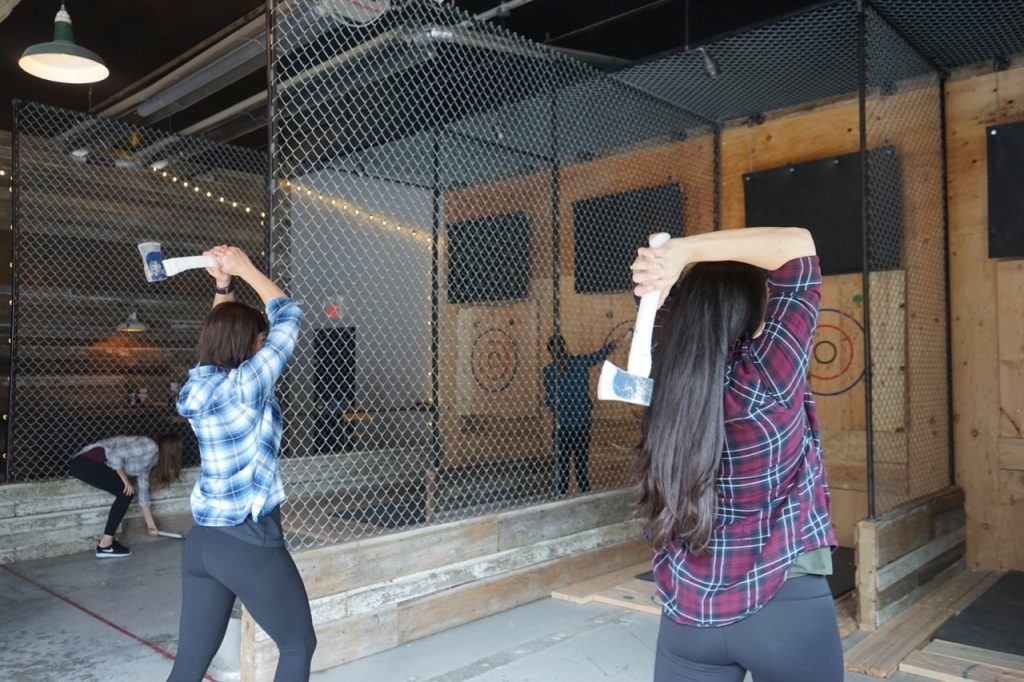 As with everything, practice really does make perfect. While axes can be thrown with one hand, it’s best to start with two.

(1)   With the axe blade pointing towards the target, grip the handle with both hands.

(3)   Bring the axe over your head with both arms, slightly bending your back as you prepare to throw. Bring the axe forward quickly, releasing it towards the target when your arms are slightly further forward than your shoulders. Expect the axe to make one full rotation flight if you’re throwing correctly – in fact, this rotation is essential in competitive throwing for it to count.

One of the most common questions asked by those new to axe throwing is “is it safe?”.

While the concept of hurling axes around might not sound altogether safe, the sport has an impeccable safety record. Indoor axe throwing facilities generally come complete with highly trained professionals who will provide safety and throwing briefings beforehand. By following a number of simple rules, axe throwing can be both fun and safe.

Axe Throwing Bars Around The World 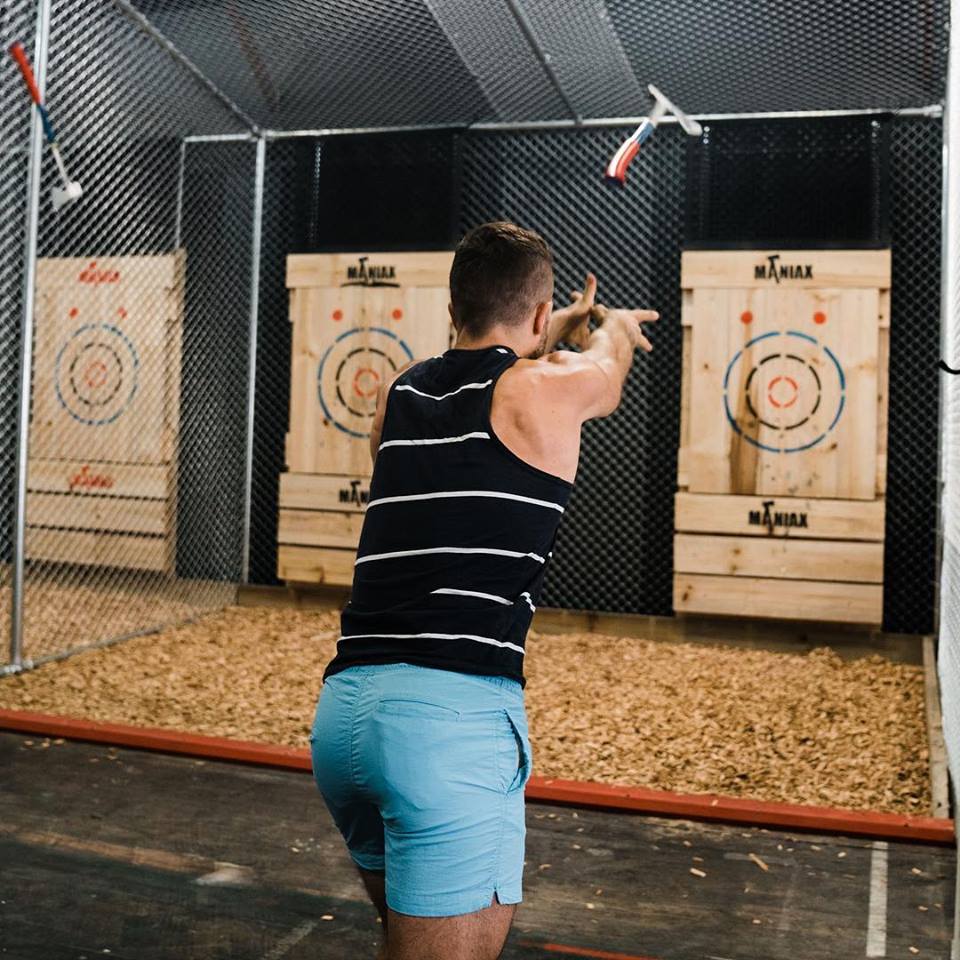 From Atlanta to Brooklyn, Bad Axe Throwing is well and truly bringing the thrill of this Canadian pastime to the masses. Bad Axe has gone from strength to strength since opening its first venue in Ontario, and now has over 20 locations throughout North America.

After spending time in Canada, James Tattersall headed home to the north of England where he established one of the three British axe throwing venues. Six targets allow up to 30 throwers to attend at any one time, and a warm atmosphere and competitive spirit come as standard.

Maniax is Australia’s home of axe throwing with venues in Brisbane, Melbourne, Sydney and Adelaide. While you need to be over 18 to throw down under, Maniax has a unique party atmosphere ideal for corporate team building, buck’s and hen parties, and birthday celebrations.

For a quintessential axe throwing experience, head to Whistler’s Forged Axe Throwing in the mountains of British Columbia. As one of the world’s premier ski destinations, axe throwing is Canada’s ultimate apres-ski or rainy day activity and regularly features in “things to do in Whistler” articles.

James got his introduction to axe throwing during a bachelor party for a friend in 2012. After taking up the sport as an amateur his interests grew and in 2017 he opened Forged Axe Throwing in Whistler, BC to build a community of others who were interested in pursuing the sport. James is currently in the middle of the pack when it comes to axe throwing stats but top of the chart when it comes to stoke!