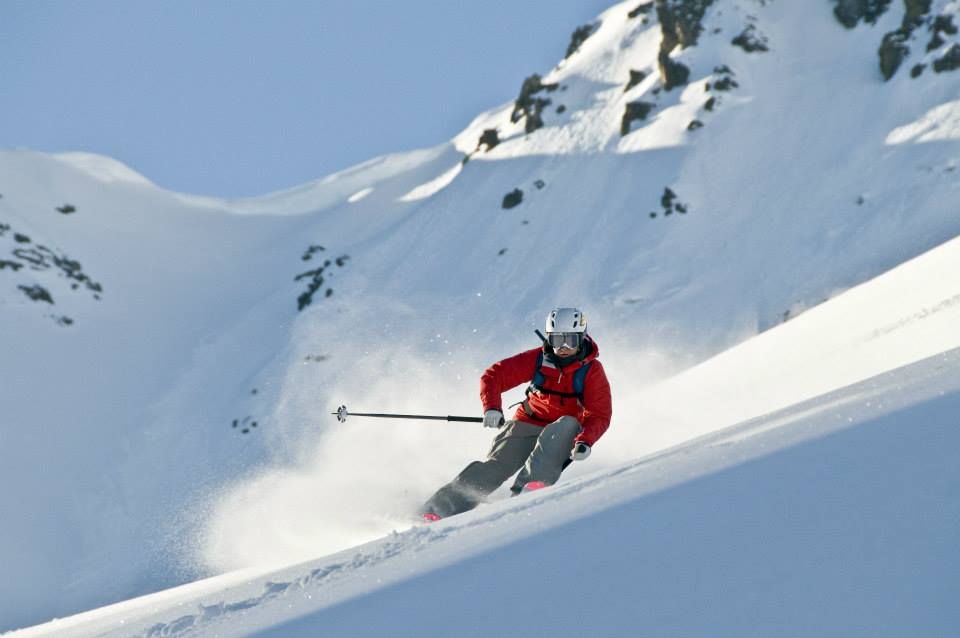 Everything you need to know about snowboarding and skiing in Greece

If I say ‘Greece’, what’s the first thing that comes to mind? Let me guess: beaches, islands, and warm weather. But Greece is so, so much more than its white sandy beaches and crystal-clear waters. In fact, 80% of its land is mountainous, with the highest peak reaching 2917 meters above sea level. That makes for some pretty interesting winter-like landscapes and – believe it or not – it also means there is skiing in Greece. 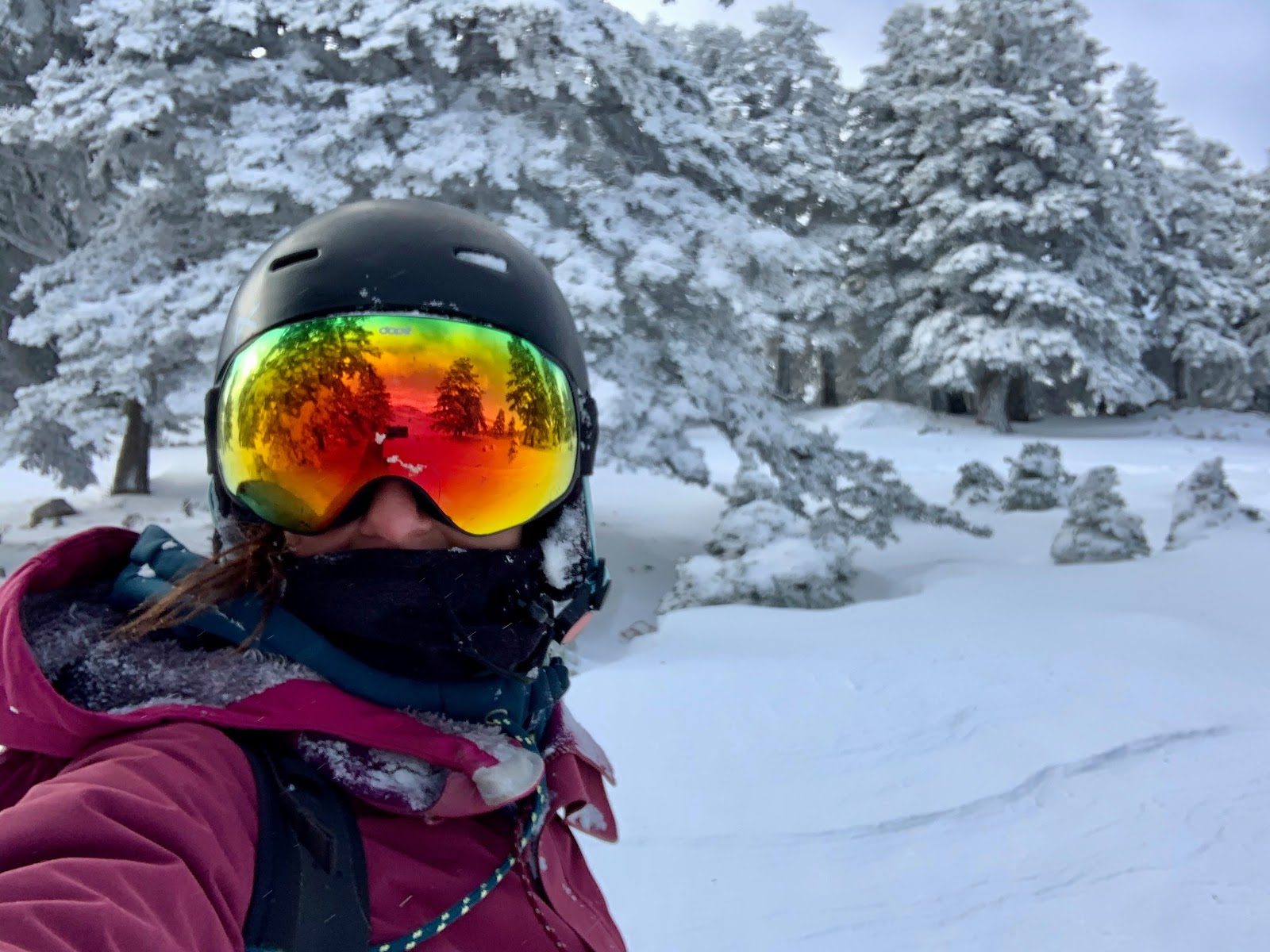 When the colder months of the year come, you can chill by the sea (or rock climb in one of the many Greek world-class climbing destinations) and bask in the 15°C sun. Then, hop in the car and, 2 hours later, get your skiing gear ready for a day on the slopes.

If you’re used to the many world-class ski resorts scattered throughout the Austrian, French, Swiss or Italian Alps, don’t expect anything of similar magnitude. Most Greek resorts are tiny, with short to medium slopes, and nothing is crazy wide or steep.

However, ski passes are 4 to 5 times cheaper than in the Alps, and you can ski with a view on the sea – and that’s pretty hard to beat. 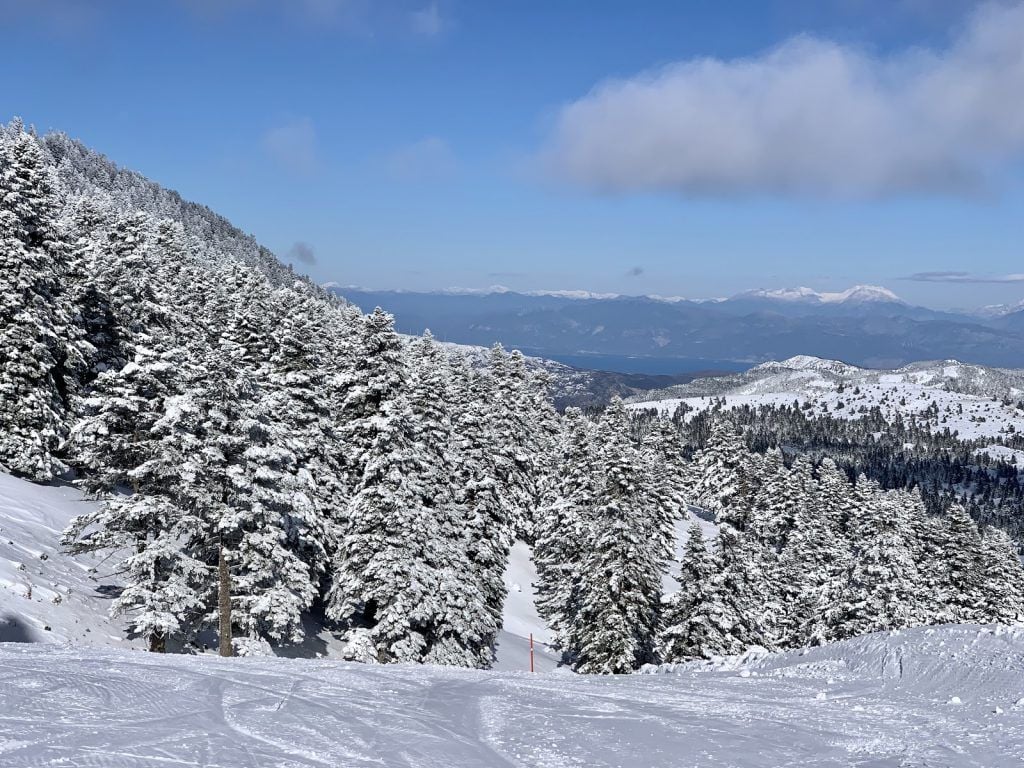 Where to ski and snowboard in Greece

There are more than 20 ski resorts scattered across the country. For obvious geographical reasons, most of them can be found in the northern areas of mainland Greece. However, two of Greece’s favorite ski resorts are the ones located within a short drive from the country’s biggest cities (Athens and Patras).

We’ve been to both. Read on to learn everything you need to know about snowboarding and skiing in Greece. 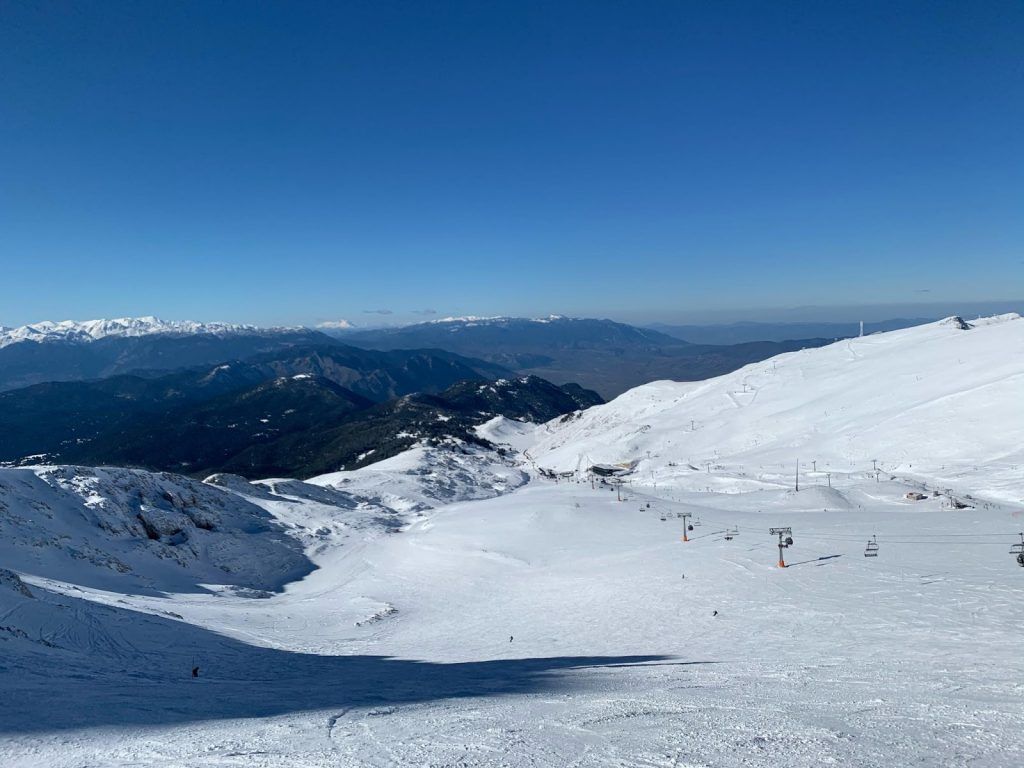 Parnassous is the biggest downhill ski resort in the country, but also the most popular in Greece due to its proximity to Athens. The resort itself consists of two different areas, connected by lifts and runs (plus a small separate one that’s linked with Kelaria by ski trails). The ski resort boasts 23 ski runs with a total length of 27 km, and 13 ski and chair lifts.

One side of the resort (“Kelaria”) is quite open and flat, with mostly intermediate and easy runs. Once you get to the top, you get an unobstructed view over the surrounding mountains and sea from both sides.

As soon as you ski down the other side of the mountain (“Fterolaka”), pine trees suddenly appear on all sides, the terrain gets steeper and you can make first tracks in the woods. The Kelaria side is windier and gets more crowded (possibly because of the newer facilities, including the restaurant), while Fterolaka is less busy. 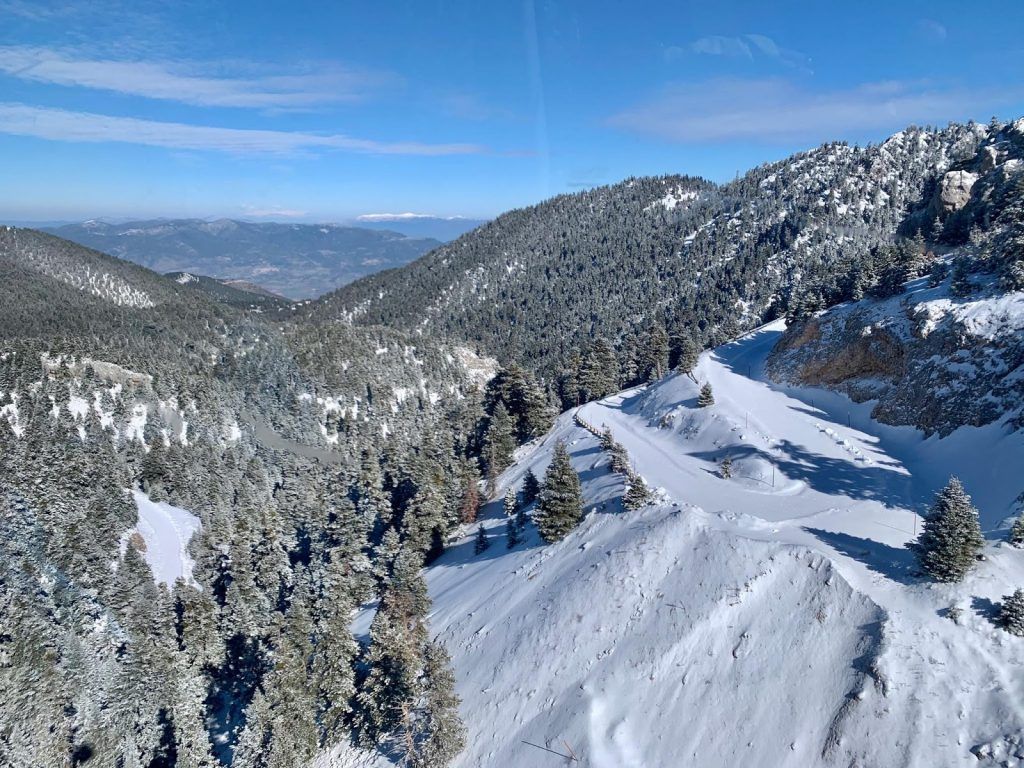 When you want a break from the slopes, you can take a quick trip to Delphi, one of the most popular ancient archaeological sites of the country.

Arachova, the closest town/village to the resort, is possibly the poshest resort we’ve ever seen (including the Alps!). Everything looks incredibly modern, new, trendy – and everything is incredibly expensive (and not just by Greek standards).

Mount Helmos is located 15 kilometers from the ski village of Kalavryta and offers 13 slopes, with a total of 22.7 kilometers. Two are for children and beginners, one is certified for ski competitions, and one ranks as one of Greece’s longest slopes. The resort is also equipped with a small but rad snow park. 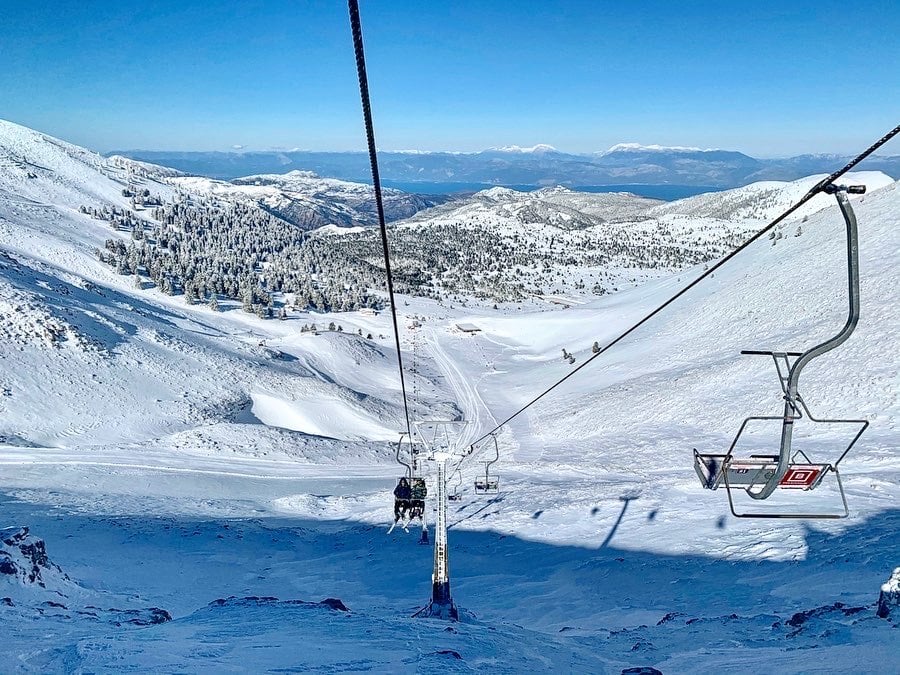 Its highest peak reaches 2,340 meters, from where you get an unobstructed view on a unique 360° landscape of snowy mountains and blue waters. From July to October, a national observatory is used to scout the universe.

Down at the village, you can get extremely cheap food (for a ski resort), get your gear waxed, and indulge in SPA time – for as little as 5 € / half an hour! On the other side of the mountains, you’re also a few kilometers away from a few archeological sites and the Lake of Caves, a natural wonder unique in the world. 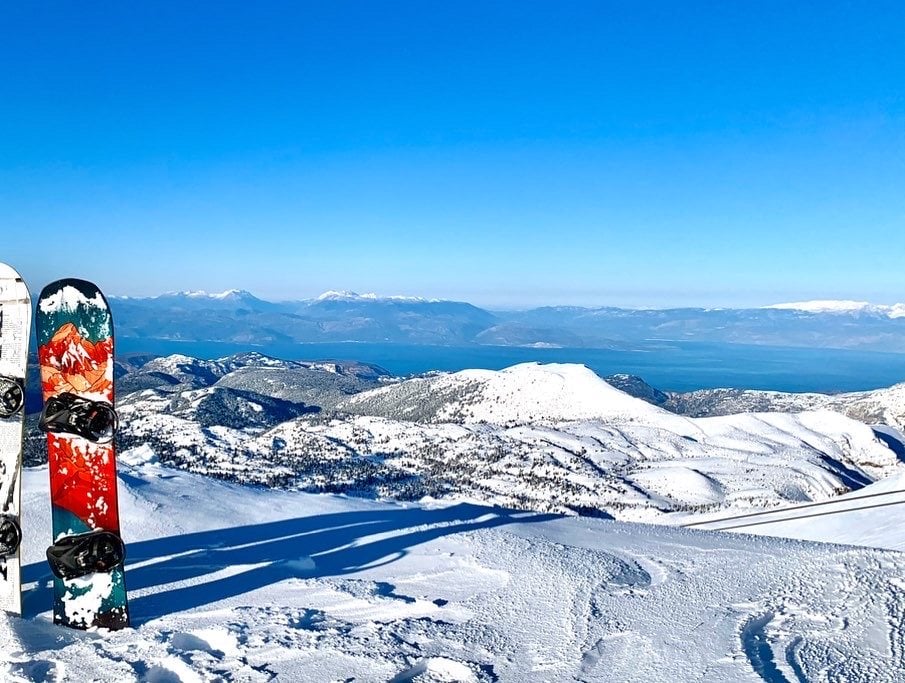 Other small resorts might be worth a visit, too, if you’re passing through the area – with Vasilitsa being another freeriding snowboarders’ favorite.

Before you go, here are a few facts about snowboarding and skiing in Greece:

13 facts about snowboarding and skiing in Greece

1. It gets pretty damn cold. On a cold winter day, it can easily reach -10/15°C with a wind chill of -20°C!Winds can also be very strong. Greece – especially its Northern regions – can be affected by cold air masses from Northern Europe, Eastern Europe or Russia, giving way to glacial temperatures.

2. Everything is cheap: a ski pass can cost as little as 12 € to 15 € per day on low season (off Christmas and the main holidays), up to 25/30 € during peak season.With the exception of Parnassous (which caters to the Greek riches from Athens) drinks and food are generally also cheap on the slopes, with 1 half a liter bottle of water costing as little as 0,5 €! 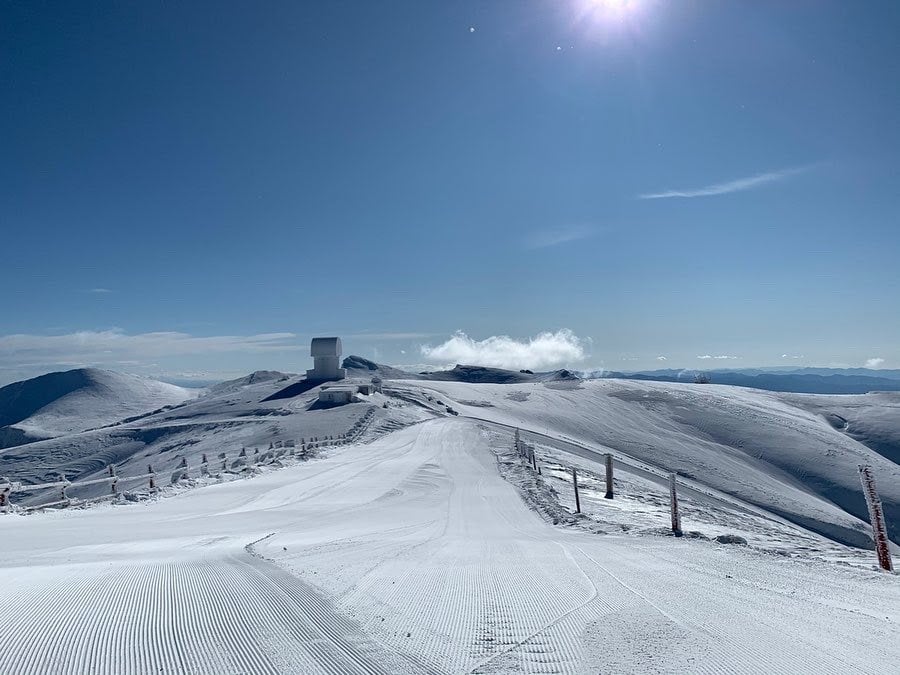 3. You want to avoid skiing on the weekends. It gets so crowded, you’re likely to wait 30-40 minutes for a lift.

4. During the holidays (and on weekends) it‘s super busy – but half of the people are non-skiers (dressed in normal clothes, in spite of the arctic temperatures!) who just want to get to the top, snap a photo and come back down. They’ll hang out at the bars and spend their day indulging in hot chocolate and pretty views.Greek skiers and riders even have a word to describe them: “Tsalapatakias”!

5. Greek ski resorts huts are quite different to the ones we’re used to in the Alps. You won’t find any restaurants cooking typical mountain food, and cozy fires stoves where you can hang your gloves to dry after a bunch of powder runs.‘Huts’ are fairly big wooden buildings, where the food is only offered on a self-service basis (coffee, drinks, and lots of mono-brand products that seem to be sponsoring the resort, like chocolate or crisp brands). The food is pretty much what you can find everywhere else in the country (yummy pastries of all sorts and hot dogs). There are a few heaters scattered around the room, but the space is so big that it doesn’t really heat up – so make sure you have enough layers on! 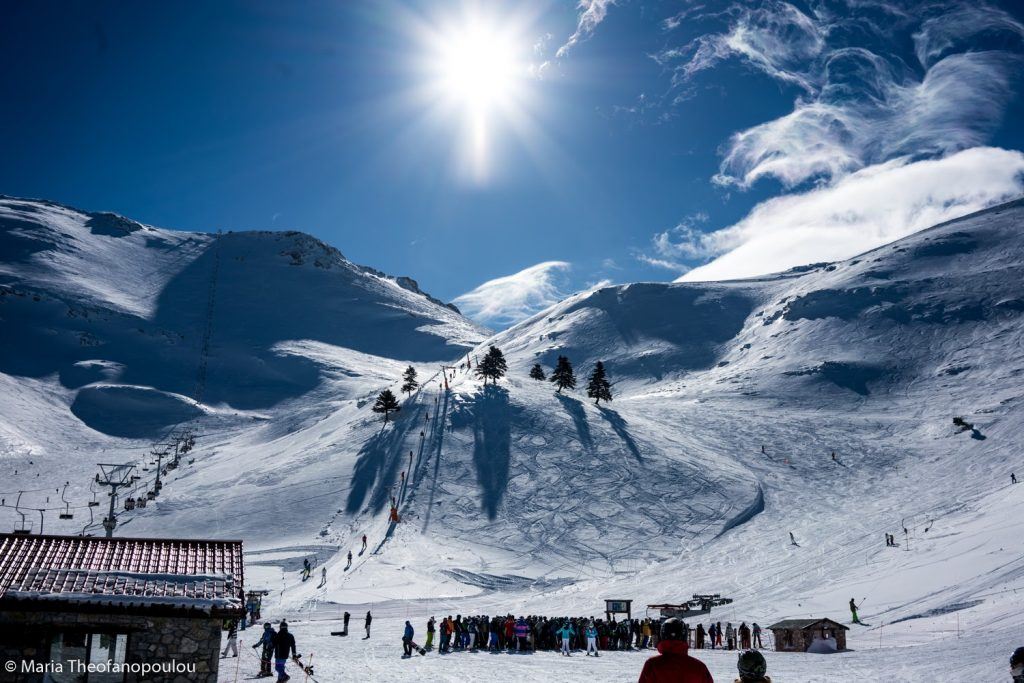 6. Perhaps our favorite thing about skiing in Greece: the people. Greek people are amazing. Period. They just love to welcome and help you out, and that – for inexplicable reasons – also means that they like to give you stuff for free. Be prepared for unrequested extra kindness – you might go get one drink and come back with 3!

7. Yes, Greek people are amazing. Everyone – from your fellow skier to the person selling ski passes – is friendly and happy to start a conversation.The vibe in Greek ski resorts is simply unbeatable. It lacks that pretentious and snobbish element that you’re bound to perceive in many first-class ski resorts around the world.

8. The vast majority of people on the slopes (80-85%) are snowboarders. Many are beginners (hence the untouched powder runs!, especially in the smaller ski resorts), but all of them give their best and only care about having a great day on the slopes. 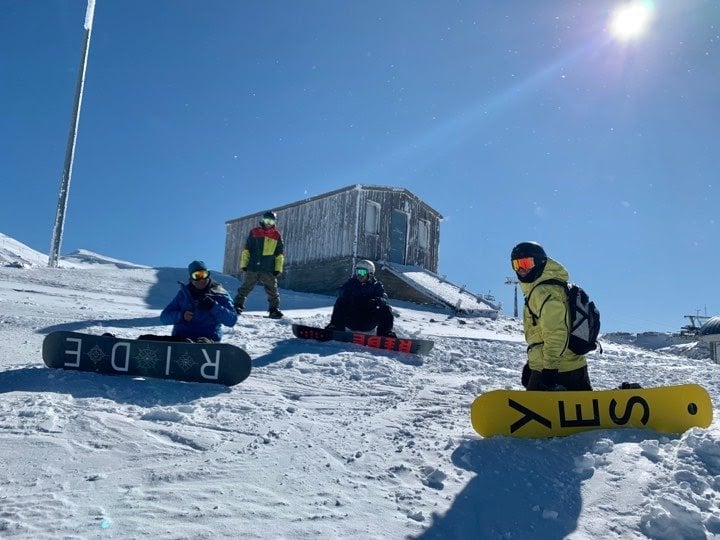 9. Snowboarders like to carry their board in their hand on the chair instead of having one binding on.

10. Greek skiers/snowboarders love to spin their cars on the icy parking ground and nearly crash into one another after a day on the slopes. Odd but true.

11. Most ski resorts don’t use snow cannons. Whenever the snow melts, it melts. There’s no plan B.

12. You won’t find any slope that’s crazy wide or steep, but you get to ski down the mountain and look at the sea at the same time. The trees and mildly steep terrain make for amazing, unspoiled powder runs, and there’s plenty of potential – read: untouched fresh snow – if you’re keen to get your skins out and make your way up to the top. Bonus point: the amazing view from all angles. Also, some ski resorts are equipped with snow parks.

13. Most people are not prepared for the icy roads and they stop (literally) wherever they are to put the chains on. It’s total anarchy. Seriously. 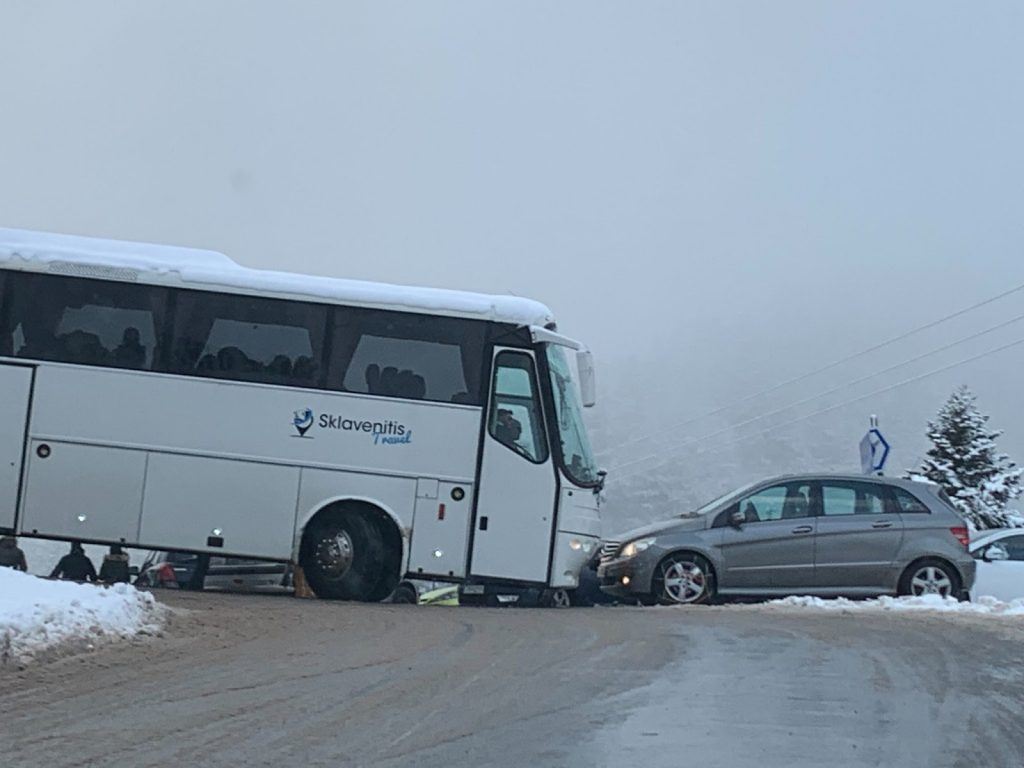 If you’re looking for a cheaper alternative to the Alps, the best ski resort vibes and great powder runs, HELLA! That’s Greek for “come on, let’s go” (and you’re bound to hear it about 100 times per day whenever you’re in Greece).

Rad Season is providing you with rentals and hotels at the lowest prices available online. Book your stay near Greece using the map below!

Martina is an Italian and Swiss Italian translation professional and founder at www.theactionsportstranslator.com, a specialised multilingual translation service that works with cutting-edge brands in the adventure sports and outdoors industries. When she isn’t opening the doors of new international markets, Martina can normally be found outdoors climbing a mountain or snowboarding down one. She is a real outdoor junkie and has lived in over 12 countries across 4 continents for the past 10 years.