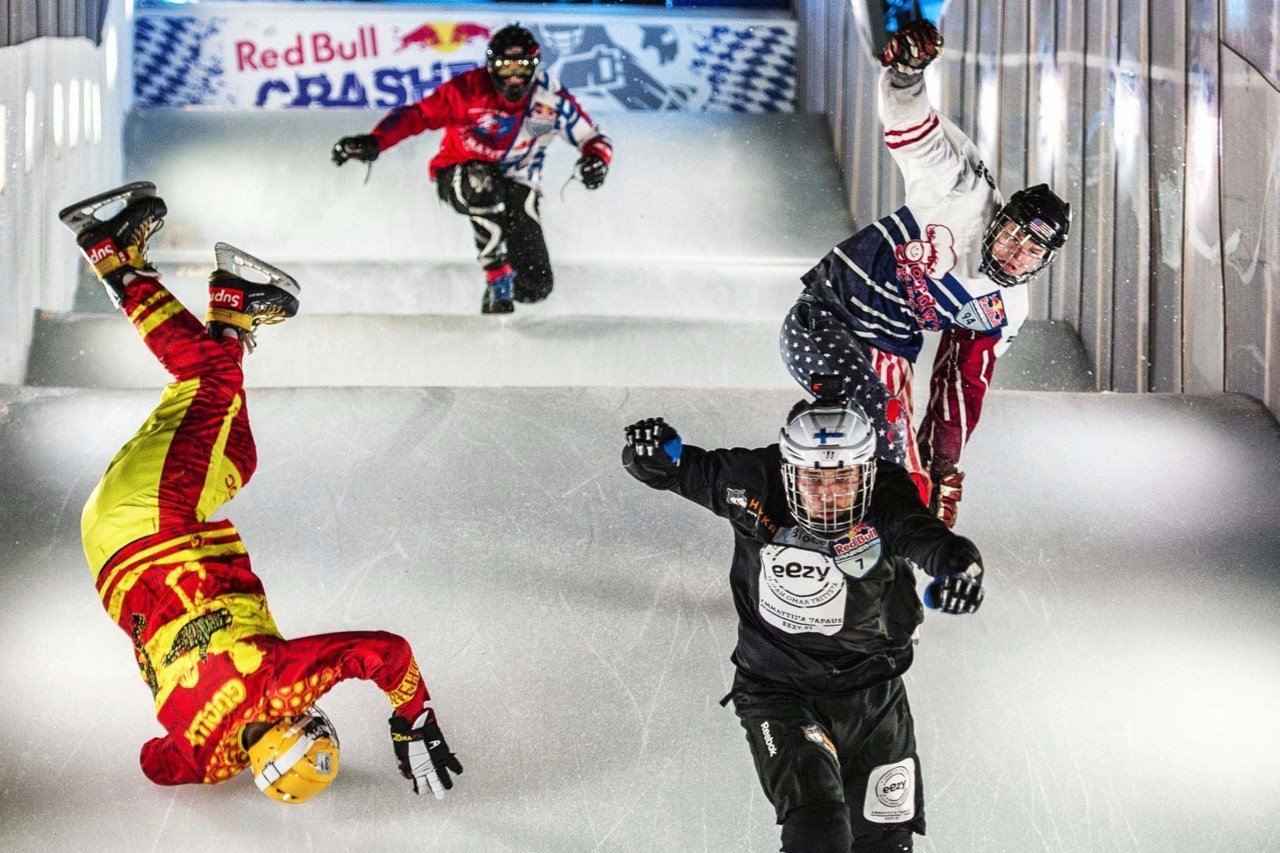 Red Bull Crashed Ice Events Are Drawing Tens of Thousands from Near and Far.

When I think of Red Bull Crashed Ice events, I think of bruising, being out of breath and, crashes. Don’t know what Red Bull’s Crashed Ice events are? By definition, it is “a world tour in the winter extreme sports world that involves downhill skating in an urban environment, on an icy track full of steep turns and vertical drops”. In Layman’s terms, it is a bunch of men or women (male and female events are separate) racing downhill on ice four-at-a-time, in full hockey gear, with a hint of boarder-cross and downhill skiing.

From what I have seen, it is one of the fastest sports on skates ever seen with some experts reporting skaters reaching more than 40mph as they manhandle each other around tight corners. Of the four skaters, that race to the finish line is intense, and cold, and action packed. Only 2 of the 4 skaters move on to the next round, so competition is extreme. This year marks the 17th season of the sport.

The best part? Most Red Bull Crashed Ice events are free and open to the public.

Last but not least, there are the Riders Cup Events which are events “for riders, by riders”. They are designed and built by the athletes from over 15 different countries. Separate to their Riders Cup ranking, these athletes can earn point that go towards the Ice Cross Downhill World Championships (approx. 25% of the 1,000 points awarded to the winners of the major stops). While the events are not on the main circuit, they are in the purlieus of those major stops and draw large crowds.

While the first set of events have already commenced, it isn’t too late to book your travel to the great USA or Canada to catch a glimpse of the fastest sport on skates.

For more information on the Rider Cup Events, click here. 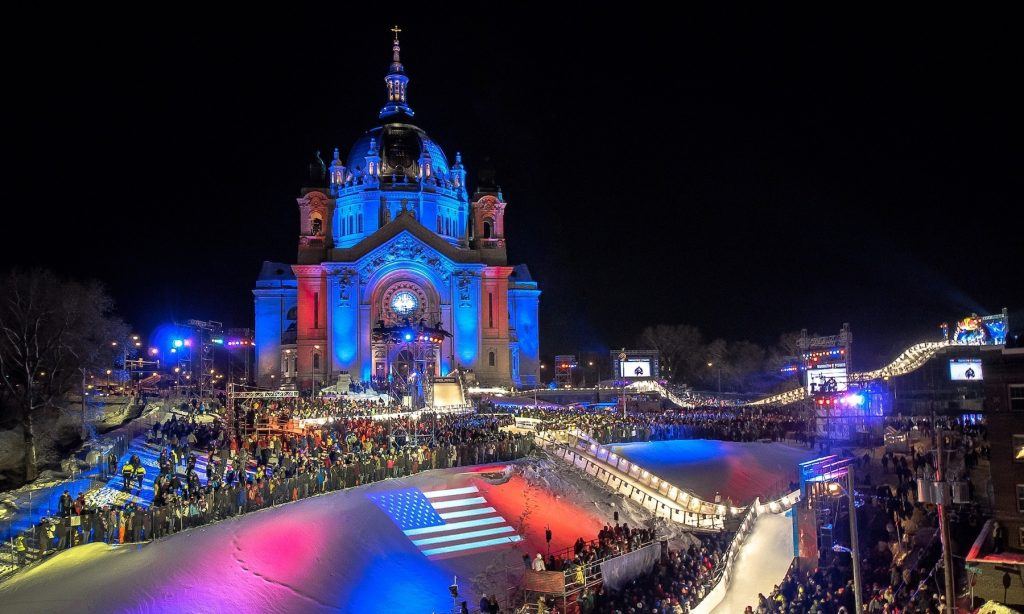 Known for having one of the harder 500+ meter (1,600-foot) course, Saint Paul, MN is hosting the 2nd to last event in the World Championship series this February. This will be the 6th straight year of hosting the event and entertaining upwards of 120,000+ fans. The track will be tough, and a true test for the endurance riders. There will be more than 100 male and female skaters competing in four-person rounds toward the finish.

Minnesota is also the home state to many fans of ice, hockey, skiing, snowmobiling, sno-cross, and pretty much any outdoor Winter sport or action sport you can think of. It is a place where people don’t shutter at a minus 30-degree wind chill or 55cm of snowfall in a few hours. They love snow, they love ice, they love the cold, and they are some of the most die-hard sports fans in the world. Who wouldn’t want to be among them during one of the coolest events in the world?

That said, it is no surprise that the Red Bull Crashed Ice 2016 champion, Cameron Naasz, is from Minnesota. He is hoping to be the first athlete to win two years in a row in his home state. Naasz was recently interviewed and quoted saying, “This competition is special to me and what better place to do it than my hometown”. He will be a person and a name to watch for this year and in coming years in this ever-evolving sport.

See how Cameron Naasz won the championship in 2016, here.

The Inside Scoop with Crashed Ice Athlete – Matt Johnson 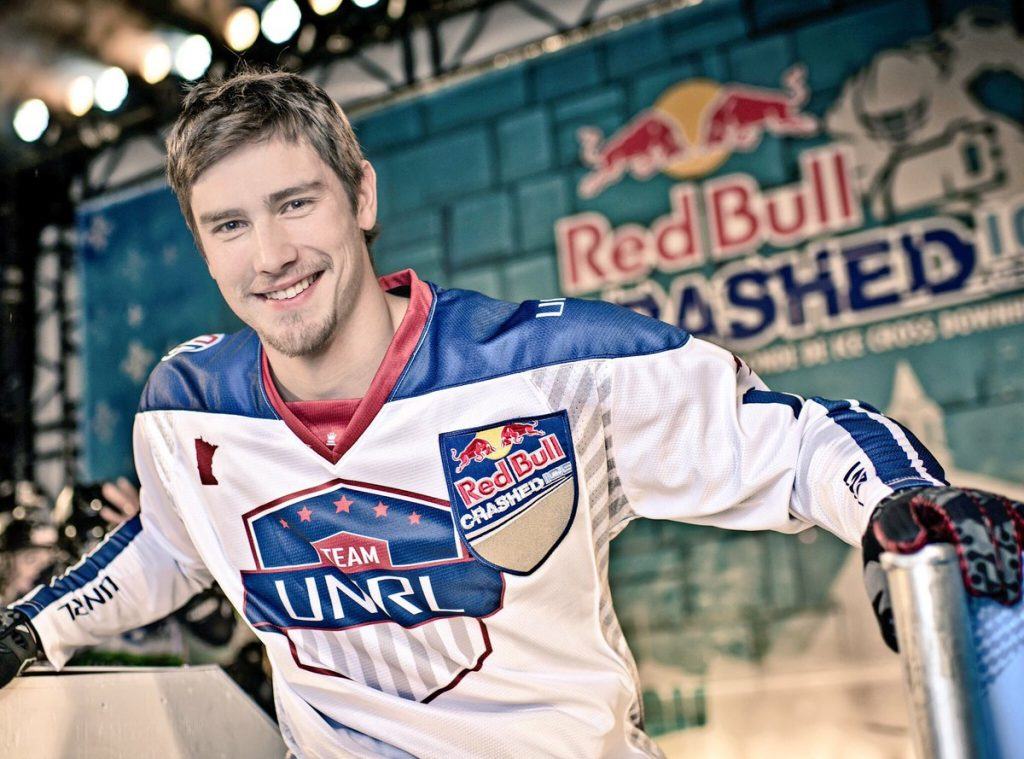 We had the chance to speak with athlete and Brooklyn Park, MN native, Matt Johnson. Matt has been playing Ice Hockey since the spry age of 4 and worked his way up to play hockey at St. Cloud State. It wasn’t until a few years ago that he heard about the sport of Ice Cross Downhill and decided to get involved in the sport. Not only has he had involvement as an athlete, he has been behind the scenes building tracks and producing the events.

Lately, he’s been traveling across the world competing and was, most recently in Finland, for Ice Cross Downhill Events. Though Matt has the “Minnesota Nice” at his core, he is a true adrenaline junkie, and he’s fierce. I had a few minutes to ask Matt a few questions and here’s what he had to say:

Natalie: Are you still liking competing? What is it like to be a Crashed Ice athlete?

Matt: Yes, it is, by far, the best sport I have ever competed in and takes you to places that you would dream of going to.

Natalie: For those who are newer to the sport, who are the athletes to know (other than you & Cameron Naasz)?

Matt: Honestly, each athlete has their own awesome personality and strengths. The die-hard fans know that we are all awesome in our own right. I recommend that people do a little research before the event and maybe tune into the old Four Below Zero Series on YouTube or Red Bull TV and really get to know who we are.

Natalie: Is this an event for people who only like Hockey?

Matt: No, this is a sport for anyone who loves speed, action, and the outdoors!

Natalie: Alright, which course has the toughest terrain on the circuit? I’ve heard Saint Paul is pretty tough?

Matt: I would say that Saint Paul is the most technical, which means, it’s a track that you can’t just ride with your toes pointed downhill (or you will wreck, for sure).

Matt: For me, it is seeing 100,000 screaming fans, with a backdrop of your capital city in the skyline. It is a feeling I can’t even begin to describe but it is something I know I’ll never forget!

Below, Matt gives us his Top 10 List of why you should go to a Red Bull Crashed Ice event. 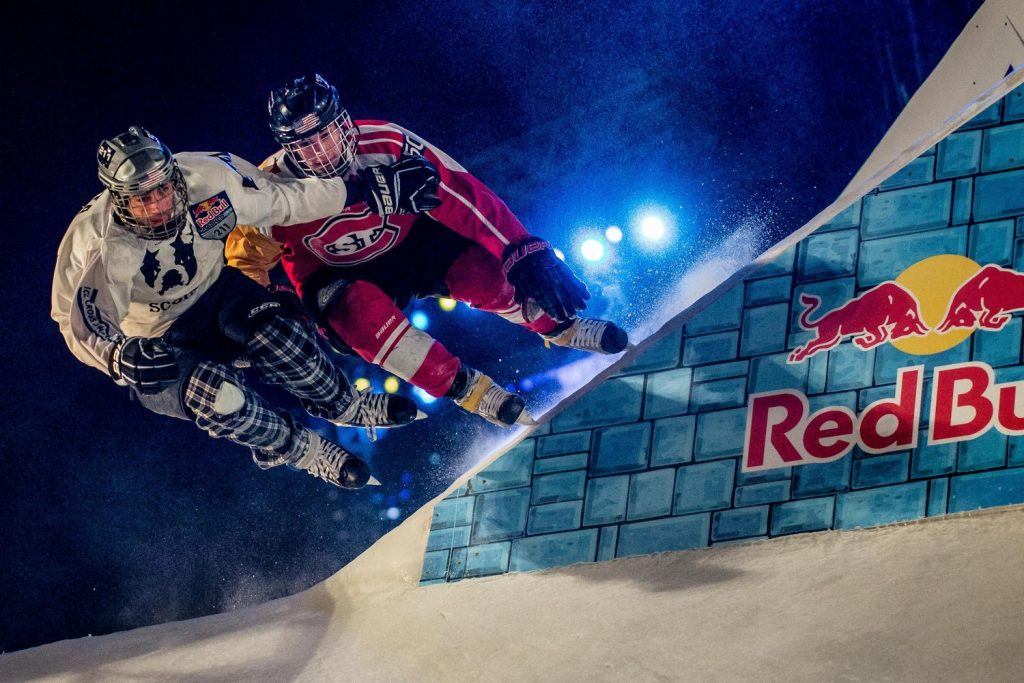 1. Ummm its Free!!!!!!
2. Crashes (yep, that’s why they call it crashed ice)
3. Venue, the places we do these races most of the time would be cool enough to just visit.
4. The track, see this feat of engineering is a sight for sure.
5. People, there will be about 100,000 spectators, means lots of friends to meet!
6. Athletes, yeah I promise we are fun and don’t bite!
7. Atmosphere, yeah, you just gotta be there.
8. After party is always a good time.
9. Speed, in person its unholy how fast we are going on skates.
10. Most likely will have a red bull and they give you wings 😜.

Feeling pumped up? We are! We’re telling you, get a group of friends, some Red Bull, and your warmest Winter gear, and get out there to see this unmissable sport. It will be the best decision you made in 2017. We promise. Crashers, unite!

If you can’t make it this year to an event, you can watch on the live-feed at Red Bull TV