5 Oktoberfest Tips You Need to Know 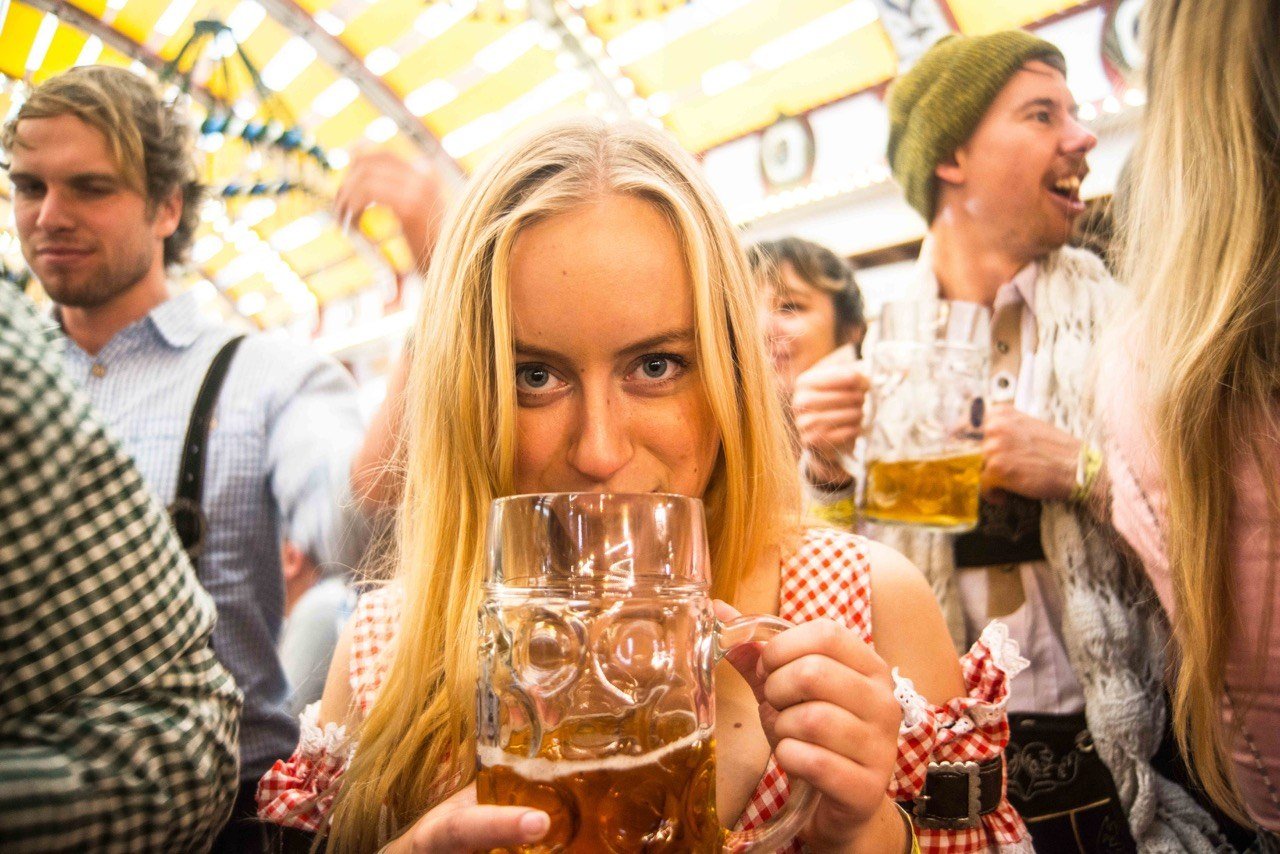 Oktoberfest is the most famous celebration of beer in the world, and as such it attracts a healthy crowd every year. In 2018, over seven million people flocked to Munich’s Theresienwiese (the festival grounds) during the two weeks of the festival. With that many people and over 30 beer tents to choose from, not to mention the carnival and vendor tents, the first time at Oktoberfest can be a daunting experience, but at Stoke Travel we’ve been bringing groups of international travellers to Oktoberfest in Germany for over a decade.

We started from humble beginnings– a dozen legends and some tents in the mud– but since then we’ve grown to be the festival’s largest tour group, hosting over eight thousand people last year. In that time we’ve learned a thing or two that we feel the aspiring Oktoberfester should know. Here are the essential Oktoberfest tips. Prost!

The Tapping of the Keg 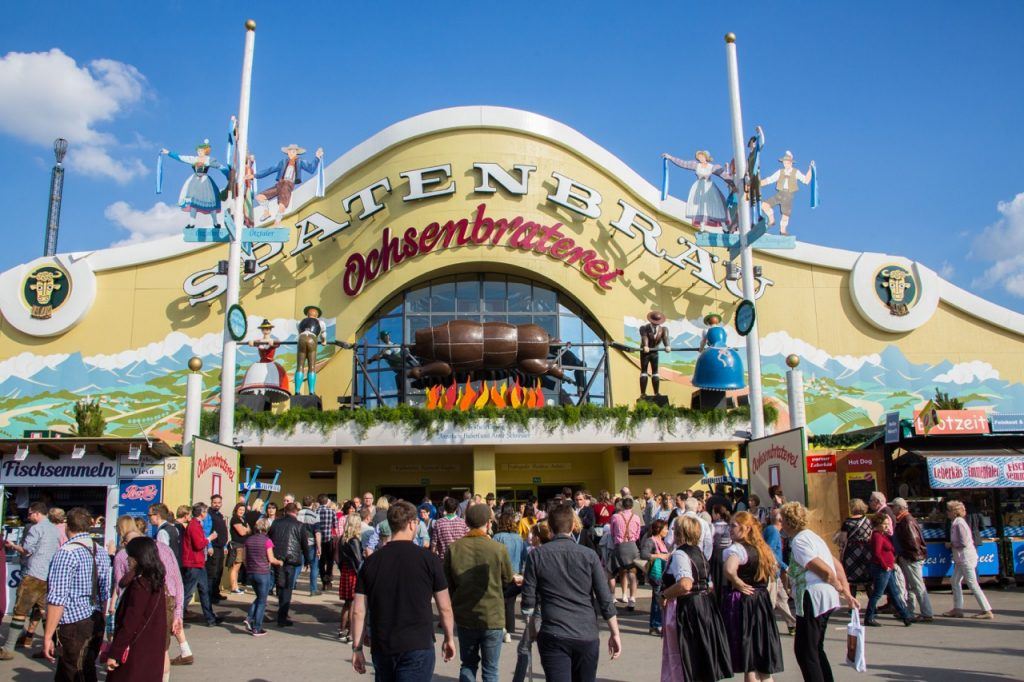 The festival starts every year with the mayor of Munich tapping the first keg. On opening day the beer halls open early and fill up fast, although no beer will be served until the keg is tapped at noon. If you want to watch the ceremony, you’re headed for the Schottenhamel tent. Consider going as early as 9a.m. to get a table. After opening day, beer halls start serving at 10 on weekdays and 9 on weekends.

Things to bring to the beer halls (or leave at camp) 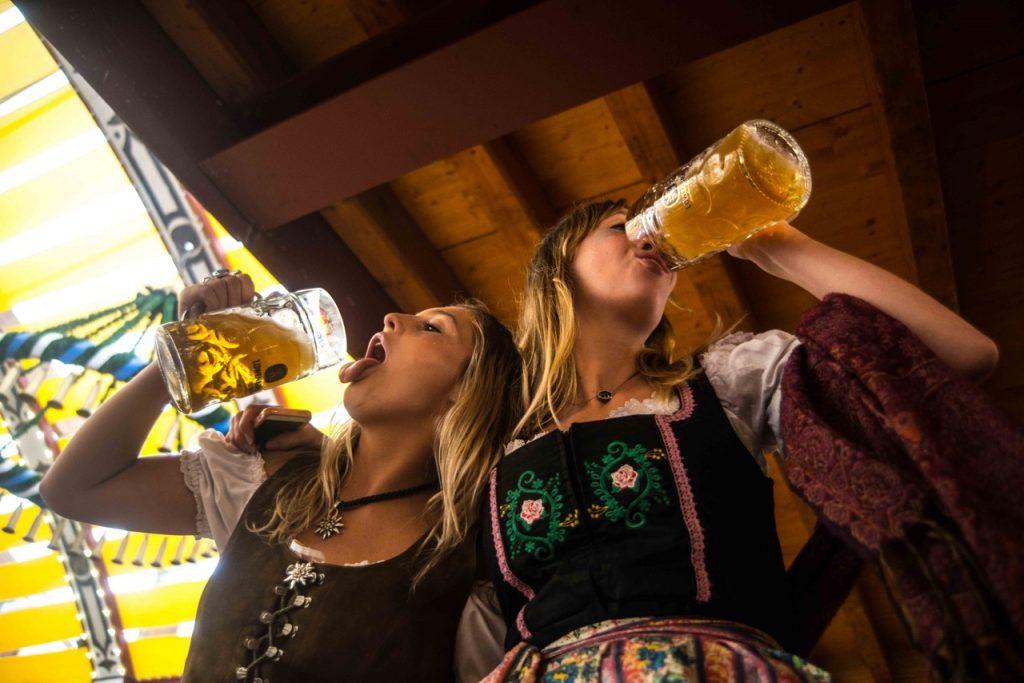 Cash – You’ll need cash for beers, food, tipping the bierfraus, carnival rides, and basically everything else at the festival.
ID – Officials in the beer tents do occasionally card people, so while you might get by without being carded, it’s better to be safe than sorry.
Lederhosen or Dirndl – don’t look like a putz wearing your normal clothes while everybody else is celebrating in their german equivalent of a party shirt.

Phones – Every year we see dozens of people lose their phone in the beer halls. It’s up to you, but we think going a day without texting your crush or taking a selfie is a small price to pay.
Jackets – Munich gets chilly in Fall, but leave jumpers and jackets at home. The beer halls are naturally warmed by the thousands of boozed bodies filling them, and it’s just one more thing to keep track of while you’re there.
Outside food and drinks – This one’s easy. They won’t let you bring it in, and there’s plenty of delicious options to satisfy you inside.
Bags/backpacks – While you can bring a small purse in, large bags and backpacks aren’t generally allowed in the beer halls. Plus, who wants to carry it around all day? 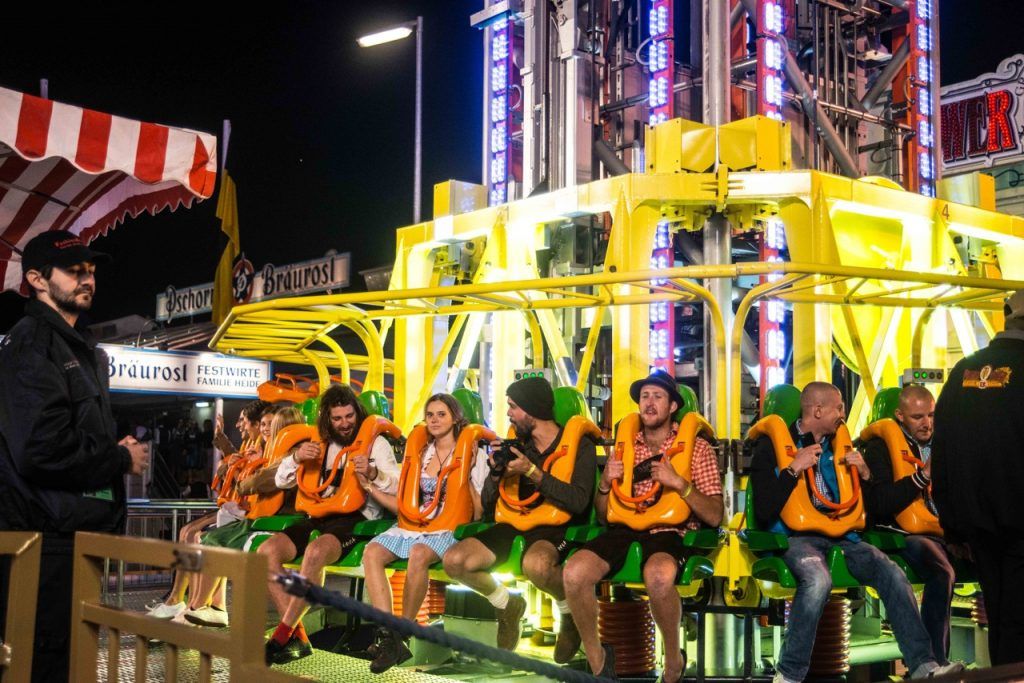 If we had a nickel for every time somebody forgot how to get home after a long day of beer appreciation, well, we’d probably just spend it on more beer. But that doesn’t help you, so get it memorised! Write it down if you have to! Otherwise your cheerful boozy day might turn into a cold, sobering night lost in Munich.

Oktoberfest waitresses, so we’ve heard, live the whole year on what they make working the 15 days of the festival. This means they’re serious about the tips they make, and if you stiff them on your first litre, you’ll likely not see them again to order a second.

3. Get comfortable in your festival outfits.

For men, this means learning the limitations of your lederhosen. Bending, squatting, jumping, or kicking too suddenly could spell disaster for that stiff leather getup. Your friends might think it’s hilarious, but you probably don’t want to spend the rest of the festival with a nice big split up the crotch of your trousers. Ladies, your dirndls also come with special instructions.

Let a German (or one of our experts at the Stoke Travel Swag Tent) fit you and show you how to wear your dirndl. As for the apron, pay attention to how you tie your sash. A knot on your left side means you’re single and ready to mingle. Right side means taken, and middle means virgin (yeah, right) so tie appropriately lest you risk the attention of many a sauced German lad.

Oktoberfest is, first and foremost, about the beer, but that doesn’t mean there aren’t some amazing things to eat as well. If you hope to last the day, make sure litres of beer aren’t the only thing filling your stomach. A giant schnitzel or whole roast chicken is a meal fit for a king, or you could snag a simple (yet delicious) pretzel to soak up some of that suds.

5. Carnival rides are not meant to be enjoyed sober!

One of the highlights of Oktoberfest (at least in our opinion) is the larger-than-life carnival that dominates part of Theresienwiese. However much you’re tempted to head straight for the rides, we urge you to wait, put back a couple litres, and then try again when you’re feeling sufficiently…tipsy.

And finally, there’s more to Munich than beers and tents! Munich is a vibrant city filled with great architecture, history, food, nightlife and culture. While you’re there, don’t forget to go out and explore some of it. Have a lazy afternoon wandering the English Gardens, take in the sights at Marienplatz, or head out of town a bit to check out Neuschwanstein Castle, which looks like it was plucked from a disney movie, or the Dachau concentration camp museum. And if you really want some fun outside the beer halls, book with Stoke Travel to have your down time filled with parties, live music, sideshow acts, unlimited beer and sangria, and the best international travellers around.

Stoke Travel are offering all-inclusive camping at their festival campsite, guides to direct you to the Oktoberfest beer halls on public transport and traditional German outfits.

Rad Season is providing you with rentals and hotels at the lowest prices available online. Book your stay near Munich using the map below!

After finishing a degree in journalism at Northern Arizona University, Christian turned tail and ran as fast as he could away from real-world obligations. Since then he’s found comfort in the island of misfit toys that is Stoke Travel, while occasionally writing, teaching, shooting video, and pouring cocktails to keep food on the table and beer in the fridge.

One thought on “5 Oktoberfest Tips You Need to Know”