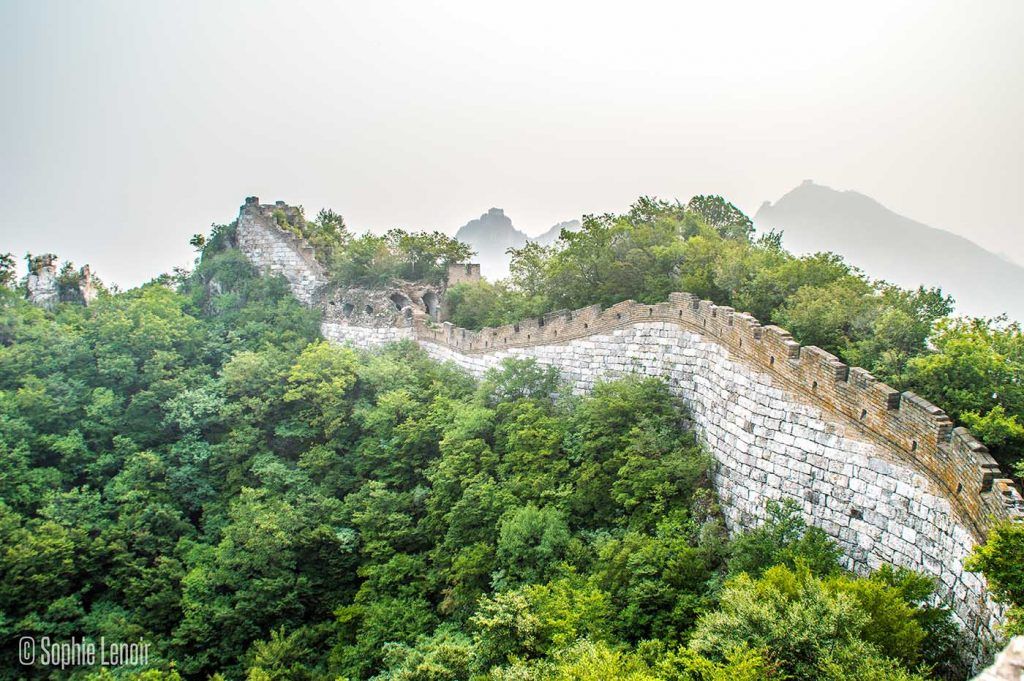 The Jiankou Great Wall of China, the mere sound of it has an impressive ring to it and conjures up images of a huge wall along the entire border of China. At a length of 13.171 miles, there’s a lot of Wall to explore. Starting from Beijing, it is relatively easy to get to several stretches of the Wall. Nevertheless, pick wisely, pick Jiankou – your entire experience depends on it. 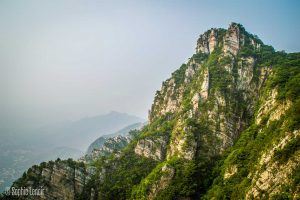 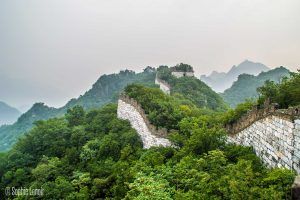 If for example a tour guide tries to sell a tour and you hear him mentioning ‘Badaling’, walk away as fast as you can. Admittedly, that part of the walk is the easiest to get too, but for that reason it is also super crowded. You won’t be able to get a shot of the Wall that is not photobombed by hordes of tourists. I believe that any section of the Wall is worthwhile as long as it’s not Badaling. After all, you don’t want to see “the All Right Wall of China”, you want to see the Great Wall. If you don’t understand this reference, watch An Idiot Abroad in which Karl Pilkington visits China below:

It’s worth going through the extra effort to get further from Beijing and explore a more remote section of the Wall. For example, you could go to Mutianyu, a beautifully restored section, where you can hike the wall in one direction, then come back when you feel you’ve seen enough. But if you’re feeling really adventurous, you should try to get to Jiankou, from where you can hike all the way to Mutianyu. This hike would allow you to see both an ‘authentic’ non-renovated part of the Wall and a restored part that better reflects its former glory.

The Jiankou section is a more dangerous part of the Great Wall because it has not yet been restored, which is why it is officially closed for tourists. No measures are taken, though, to prevent anyone from climbing the wall. Beware that if anything happens, you bear all responsibility yourself. I would strongly suggest that you only go there if you’re physically fit and ready to suffer. I’m kidding. (Or not?) 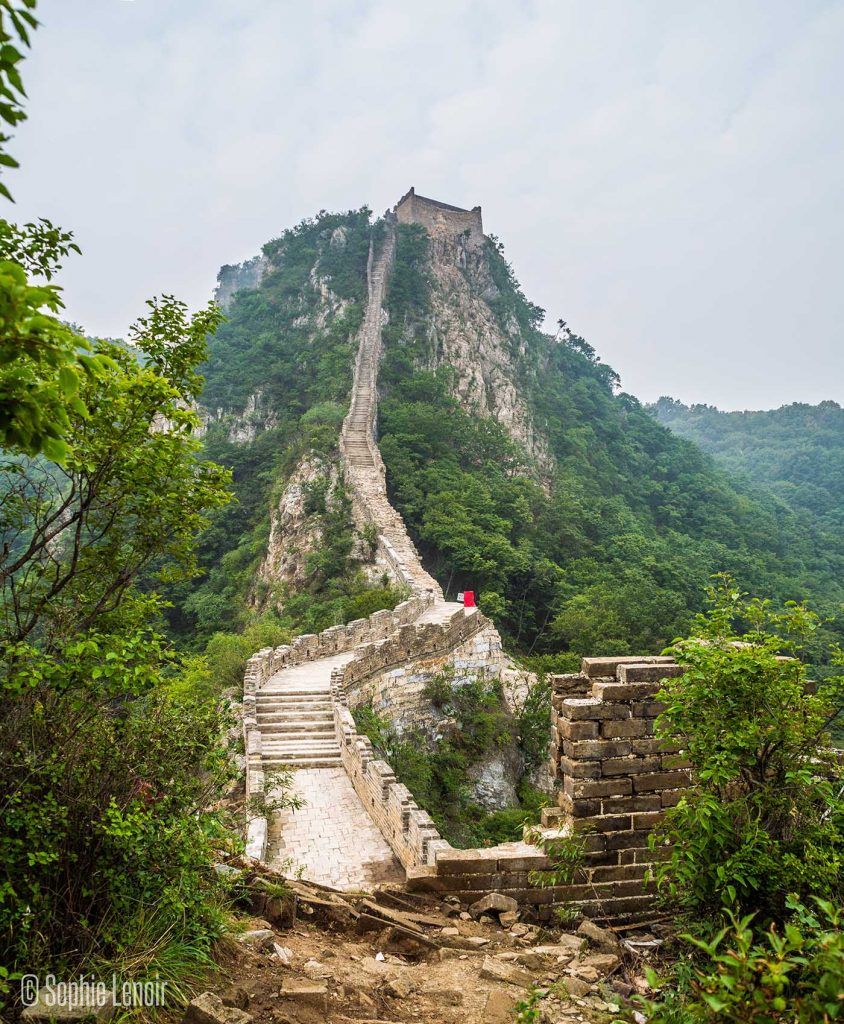 Does this sound appealing to you? Read on and I’ll tell you more about my experience. I’ll start by clarifying one thing: I did suffer. The heat, the humidity, the thirst, the continuous climbing, the thousands of steps… I must admit that the anticipation of the entire experience sounded more romantic than the actual execution. (Pun intended.)

My hike from Jiankou to Mutianyu

Using public transportation, I travelled to the little village of Xhizazi that is close to the starting point of the Jiankou Great Wall hike. I spent the night in a little hotel and woke up before dawn to start hiking before the temperatures rose. Despite the well-intended explanations of the hotel keeper (it didn’t help that she only spoke Chinese), it was quite hard to find where to access the wall. From Xhizazi, you start by walking through a forest, in which several paths lead into different directions. I had tried two different paths and had stumbled twice upon a gigantic stone construction that was impossible to mount.

Gradually I came to understand the frustration of the Mongolians who must’ve faced a similar situation when this wall suddenly stopped them from invading China. I was about to head back to the village and take another route, when the third path finally led to an opening in the wall. Third time’s the charm, right? There was even a little flight of stairs that helped me get onto the Wall.

Finally standing on THE Great Wall of China, I looked around and felt so overwhelmed by what I saw. Ahead of me, the wall, still surrounded by mist, curved for miles and miles through the green mountains. Behind me lay a very steep and impressive flight of crumbling stairs. I felt relieved that was not the direction I had to take. 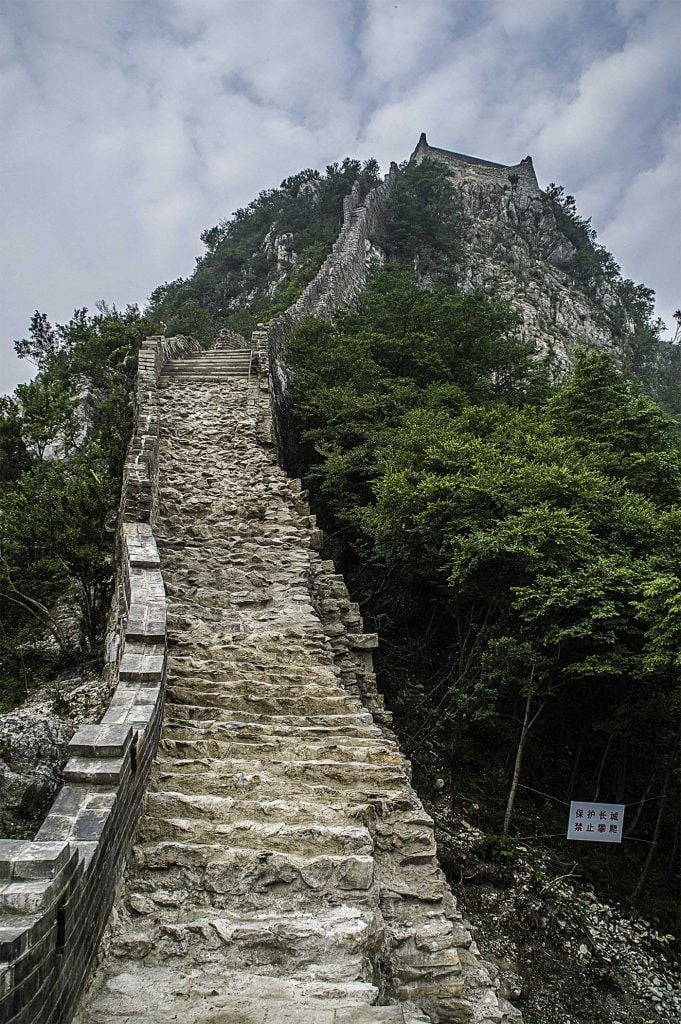 The first part of the hike was a continuous repetition of climbing up and down vertical sections of the wall. Not much remained of the original stairs, so it was a bit like rock-climbing, but without the gear. At the top, watchtowers offered awesome views over the surroundings… which were a bit less awesome when I looked ahead at the next stretch I had to cover.

Everything I had climbed up, I had to descend again. Without stairs, this can be a real challenge. I came to understand why it is officially not allowed to come here. A little misstep is all it takes to fall and break a leg (not in the good way). 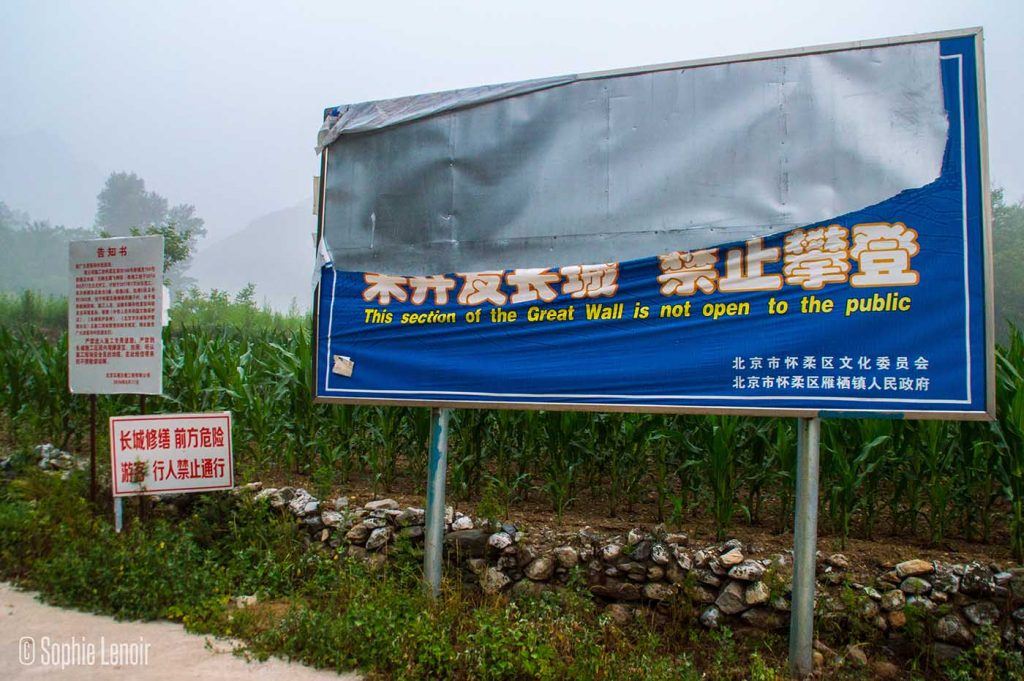 Nevertheless, this was exactly the experience I had been hoping for. Most of the time I had the wall entirely to myself. I only had to share it with occasional Chinese hikers coming from the other direction. It was a bit foggy (which is quite usual for China), but the views were still amazing. And apart from my heavy breathing and occasional cursing whenever another series of stairs loomed up, everything around me was so silent. Although it may not be obvious from my description, I was really enjoying the experience… so far.

On the next part, I slowed down as it became increasingly hard to climb up and down all the time. The sun had risen to its summit and I was soaked with sweat and thirsty as a camel. I got mad at the wall because it put me in so much pain and started having vivid hallucinations of flat stretches of shady grassland. It was time for a break. 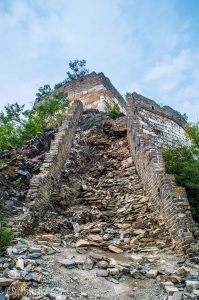 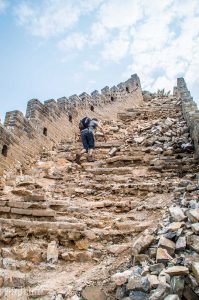 Gradually running into more and more tourists, it became clear that I was approaching the Mutianyu section of the Wall. This part is easier to walk, because it has been restored, although there are still some difficult stretches to cover too, such as the long slippery slope after Ox Horn Edge. To prevent myself from falling, I had to hold on to wall with both hands and slowly walk sideways like a crab on dry land.

This entire hike had required a lot of effort from my -by now- wobbly legs and knees. I couldn’t handle more steps and I feared that my knees wouldn’t hold me anymore. Every so often, I overheard tourists coming from the other direction complaining about how hard it was. “Every time we get up a flight of stairs, all we see is another flight of stairs!” That is true, but they don’t realise how grateful they should be to have stairs at least. It is much worse without. 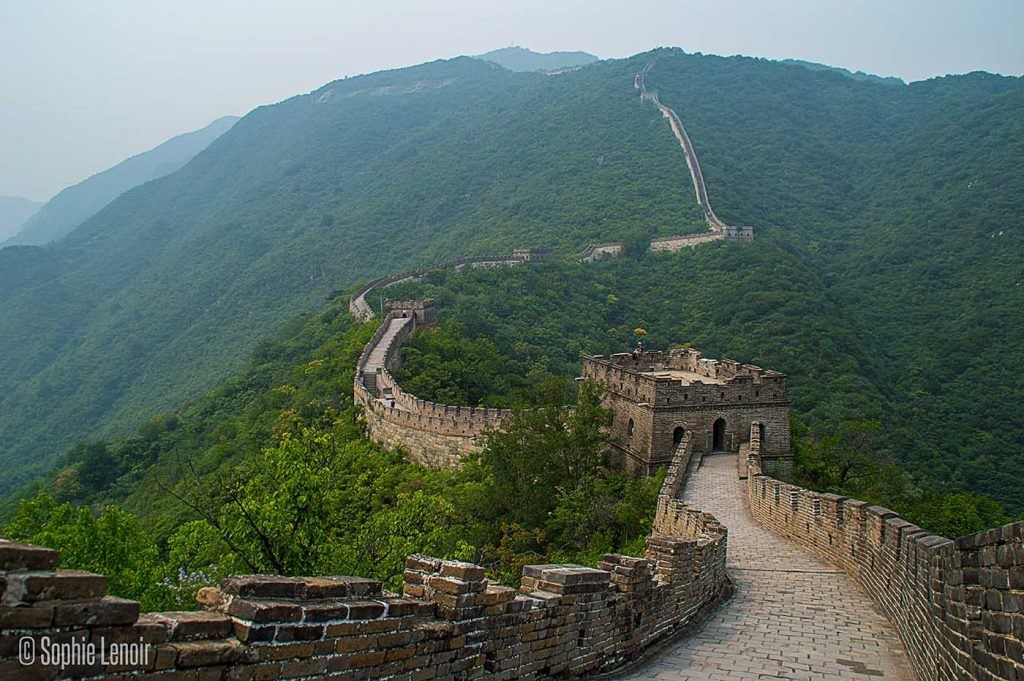 Luckily, the end was near. I waved the wall goodbye and headed towards the village of Mutianyu. Or so I thought. Suddenly I found myself on the wall again and on another series of downward steps. A bit further, I left the Wall again, for real this time, but not without one last -but endless- flight of stairs that took me all the way down the mountain. Exiting through the gate in Mutianyu meant this adventurous hike had come to an end. Immediately, another urgent mission presented itself: Where could I buy a gallon of water and cold beer?

Do you still feel motivated to go and check it out for yourself? Of course you are! Then read the full article on Everything Brussels with more detailed information on how to plan your trip. 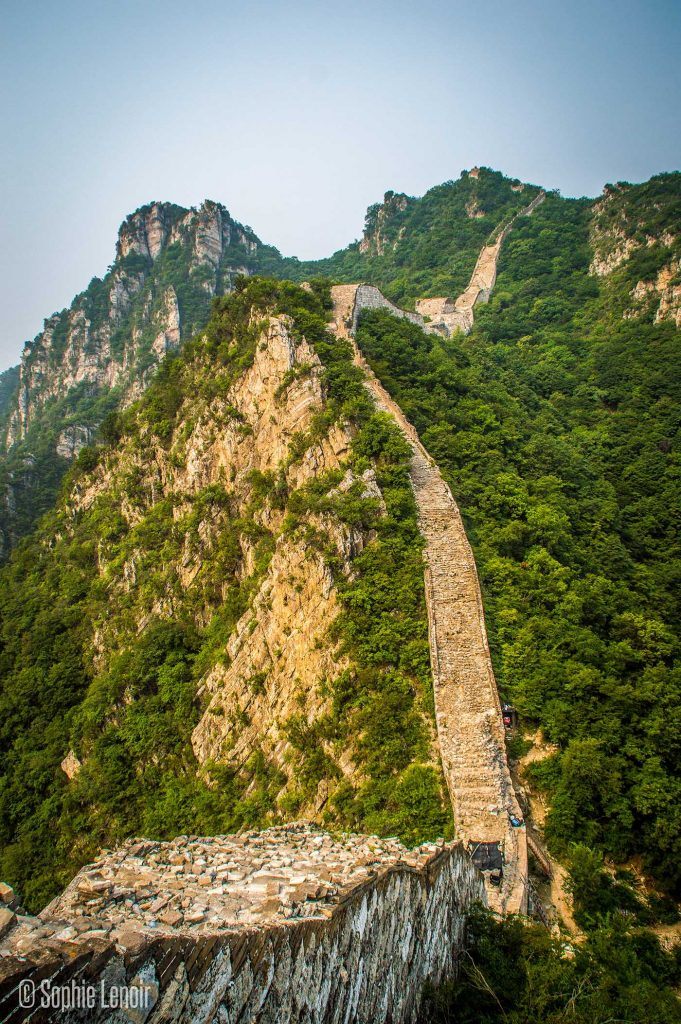 A Daring Adventure In Kashmir: Mountains Of Magic In Ladakh

Rad Season is providing you with rentals and hotels at the lowest prices available online. Book your stay near Jiankou using the map below!

My name is Sophie and I've been diagnosed with a serious travel bug infection. Among the symptoms are restlessness and dreaminess when deprived of travel. Pictures of beautiful places I cannot immediately go to provoke serious grumpiness and moodiness. The doctor said writing would help. So here is the result of my therapy: www.everythingbrussels.be, a blog full of travel memories for me, and tips and inspiration for you.