The World Tours of Gravity Riding 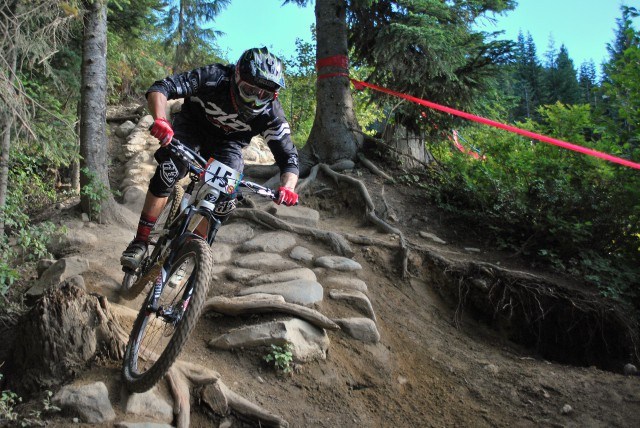 If you fancy yourself a bit of mountain biking, then the UCI World Cup and Enduro World Series are surely pinging your radar as ideal vacation destinations. Why not mix some sight seeing with the best mountain bike tracks in the world? The two events are the top tiers of competitive world-class gravity riding. The UCI WC has a long and storied history, but the EWS is the new kid on the block. Thankfully, their schedules overlap perfectly and elite athletes with the gas tank to handle two full world tours over the summer have the option to sign up for both race series.

Any stop you might visit along the way is going to showcase the absolute pinnacle of cycling talent and speed. All you have to do is decide which local you’d like to check out while bouncing between race runs and maybe a few trail rides of your own. 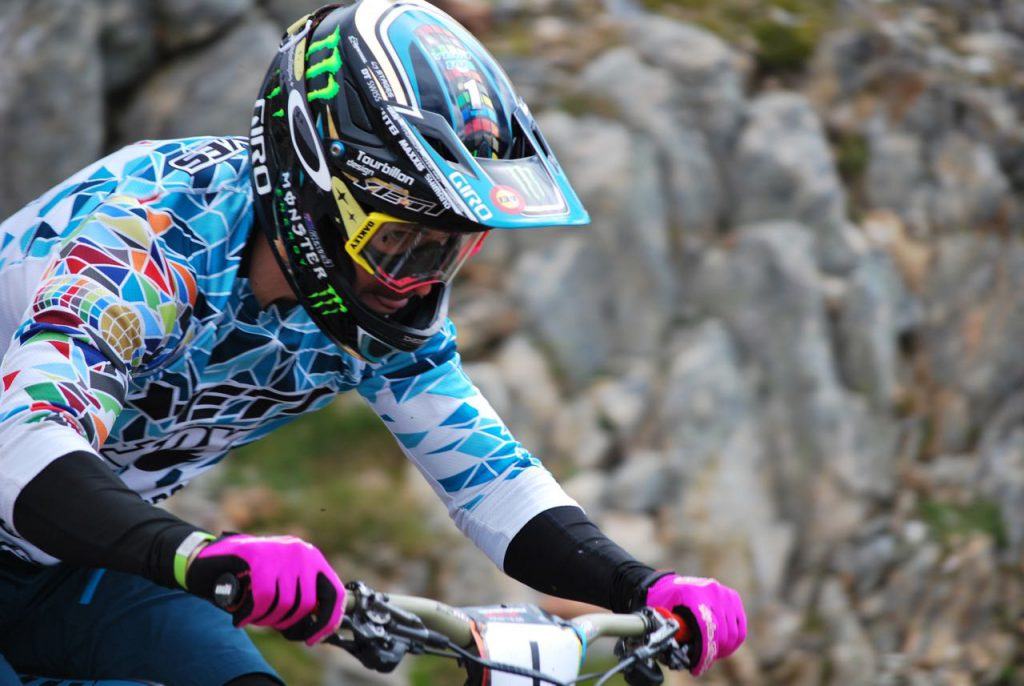 facebooktwitterpinterest Jared Graves representing the #1 plate in the EWS stage on the Top of the World Trail at Crankworx Whistler. Graves would end up 3rd on the day.

Do you enduro? Full-on DH riders might balk at the enduro discipline (or as it’s been know for years, just riding your freaking bike) but bearing witness to a stop on the Enduro World Series should be more than enough evidence to convince you that it’s a full-on gravity fed test of skills, endurance and balls. Whichever way you spin it, enduro and DH events are pushing the bikes, riders and tracks to their breaking point.

We had a chat with Todd Schumlick, owner and manager of Norco Factory Racing about racing the UCI DH events and EWS circuit. We were curious as to how many athletes race both disciplines, and how the two styles of gravity riding might evolve and coexist in the future. Currently, Sam Blenkinsop on the Norco team is one of the only top class riders who are racing a full schedule of UCI DH and a majority of the EWS tracks this season. 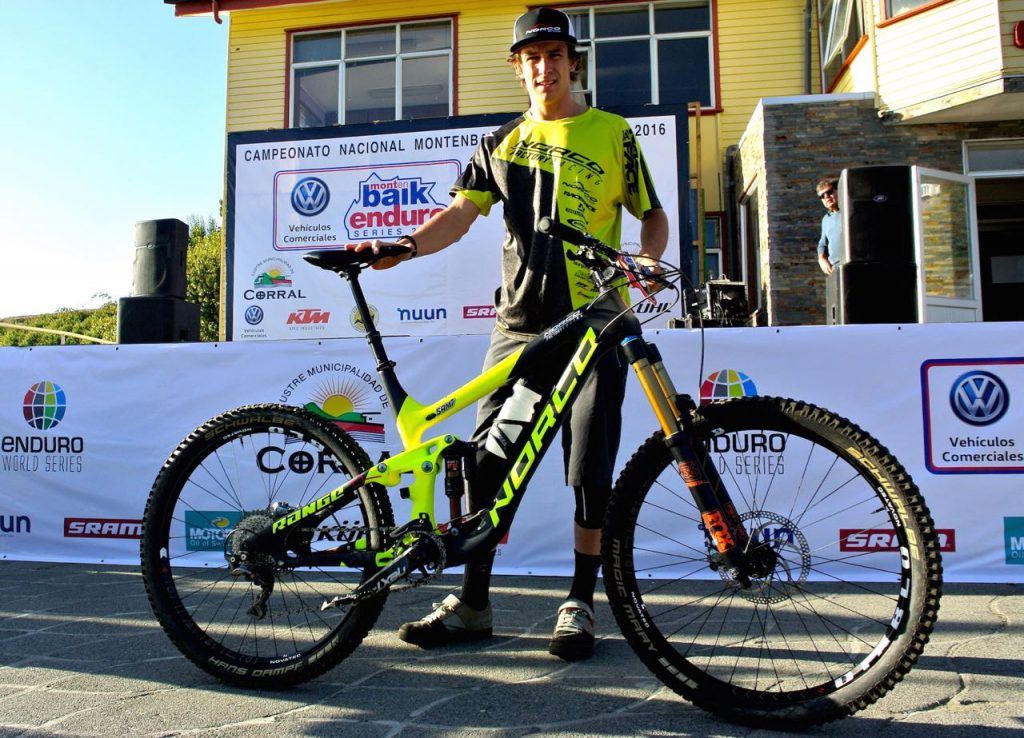 facebooktwitterpinterest Sam Blenkinsop and his Norco Range. This carbon steed makes an appearance at each EWS race, whereas the full on DH Norco Aurum is the bike of choice for DH tracks.

“Currently, I think there’s only a few riders interested in doing both (Sam, Wyn Masters, and maybe one or two others).  Many feel it’s a bit too hectic to do both, at least full-time, so people stick with the discipline they are currently best suited or sponsored for.  Part of this is the reason Sam is only competing in 5 of the 8 EWS events (Corral, Bariloche, La Thuile, Aspen, and Whistler), while he competes in the entire UCI World Cup Downhill series.  As the sport (EWS) grows, we could see this change with teams and riders though.  As the coverage and exposure increases, more could participate.  Currently, I think there are a few sitting on the fence.  Time will tell!”

If you’re not too hung over from sampling Chilean wines, the trails in this costal town are unbelievable. According to Norco Factory Racing “Corral was much flatter and required more pedaling” compared to most EWS tracks. If pedaling is your cup o’ tea, Corral is your type of town.

Making its second appearance this year, Lourdes is an instant classic. Stay tuned for this course next year!

One of only two stops on the circuit that’s outside of Europe, Cairns’ rainforest trails in the Smithfield Mountain Bike Park tend to get rowdy.

While Ireland might not sport the most massive peaks, this race makes up for its geological shortcomings in atmosphere. The fans are off the charts in Wicklow.

Highly regarded as one of the very best tracks in the world by both riders and spectators. At 2.8km, the track is one of the longest and hardest tracks on the DH circuit.

Aaron Gwin won here in 2015 even though his chain snapped right out of the start gate.

DH races in the Swiss alps? Can you think of a better place to hold a MTB race?

Located on the Italian side of the border this race takes place under the looming presence of Mont Blanc. Watch the races or hit the endless singletrack that surrounds La Thuile.

Deep in the heart of the American Rocky Mountains, Aspen is both super swanky and riddled with bike trails. “Where the beer flows like wine and women flock like the salmon of Capistrano.”

One of the classic DH tracks, Mont-Sainte-Anne has hosted UCI races since 1991. With the Canadian dollar wallowing lowly, it’s a great time to visit!

Right smack dab in the middle of Crankworx, this stop on the EWS tour is a must see. Crankworx, Whistler might just be the best week of the year for cycling fanatics. 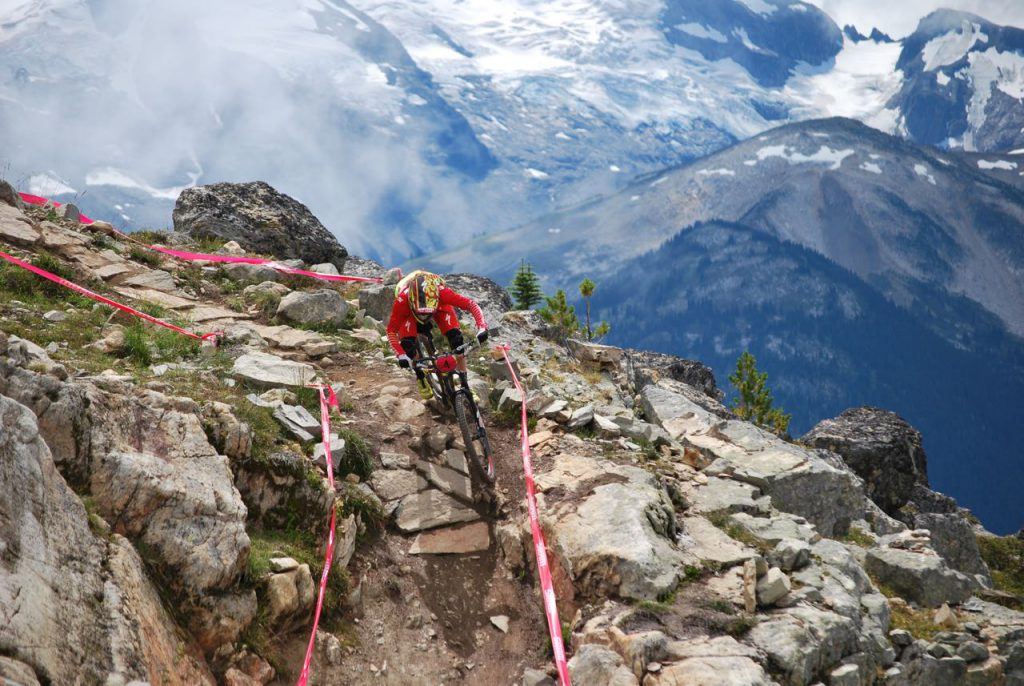 facebooktwitterpinterest Anneke Beerten took 4th in the EWS Enduro at Crankworx Whistler, but secured the coveted Queen of Crankworx title.

This one’s for all the marbles. Whoever takes the win at Val di Sole has the honor of repping the rainbow stripes for the upcoming year. The most important race of the year? Definitely.

If you want to watch the riders suffer, this is your race. Less lift access and more pedaling in the Southern Apls makes for a punishing enduro. But feel free to enjoy as much fondue as you can stomach.

The EWS ends with a bang along the Italian Riviera. Two days of racing through Mediterranean villages and more single track than you can handle make this an all-time destination.

Perhaps you’re just keen on watching the races, but if you’re adventurous enough to travel with your bike, planning a trip to coincide with these races is an easy recipe for adventure. There’s guaranteed to be a ton of likeminded fans. That means more riders in town and a bigger community to draw upon when looking for the best local trails.