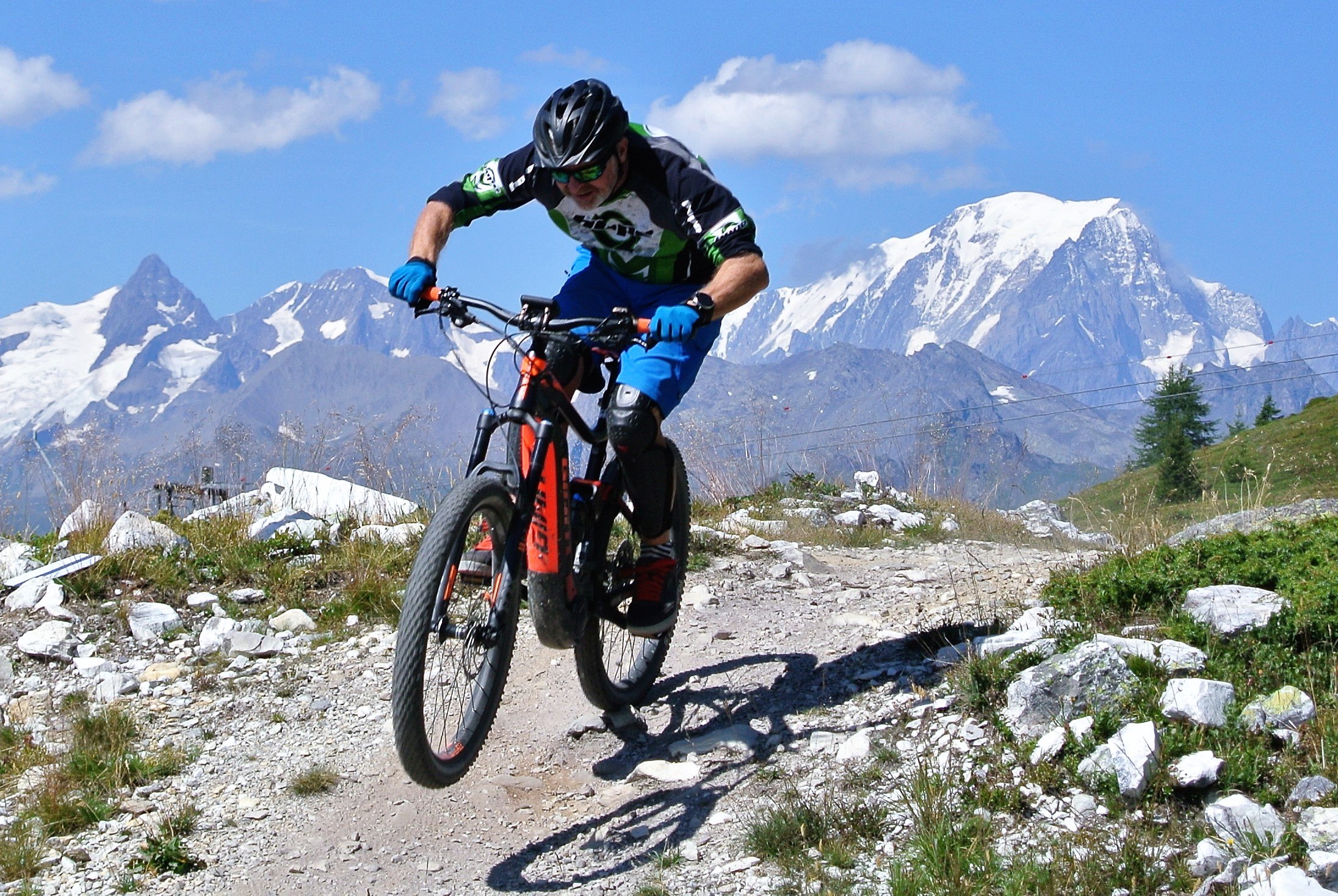 Are E-Mountain Bikes the next big thing in cycling? Alf Alderson reckons so…

“If a bike has a motor then it’s not a ‘proper’ bike,” said my mate before I had my first ride on a mountain bike last summer, and I had to admit I thought pretty much the same until I hit the trails in Les Arcs on a Giant Full-E+1 e-mtb.

That opinion had disappeared within less than five minutes of getting off the top of Les Cachettes chair and hammering down towards Arc 1800. By the time I’d spent four hours hooning around Les Arcs Bike Park, I was a convert; wearing what my mate Tony, who owns an e-bike shop, calls ‘the electric bike smile’. I was a convert and convinced that the cynics really ought to get out more.

Although the trails of Les Arcs Bike Park are accessed by ski lifts and are primarily downhill all the way, there are ascents if you want them; and when I hit one riding up, it was a cinch on my new e-bike thanks to a motor that gave me a choice of ‘Eco’, ‘Normal’ and ‘Power’ modes.

Uphill sections that would have been a slog on my regular mountain bike could be brushed aside with ease as I simply started pedalling and the motor would engage to assist me in the climb. It was like being given a push by your dad when you’re learning to ride your bike, and we all remember how much fun that was.

I rarely had to go into anything other than ‘Eco’ mode, which as the name suggests, required the least output from the bike’s motor. This combined with a mix of Shimano Deore XT and Deore gears for quick and efficient gear changes, provided some of the easiest mountain bike ascents I’ve ever done.

The bike also came with a dropper post, so you could attain a comfortable rising position whether going uphill or down, although because of the assistance provided by the motor, pedalling with the saddle set low for descending was a lot easier than it is on a ‘normal’ mountain bike; so I didn’t always bother to readjust it after a downhill run.

Add to that Fox suspension front and rear and the ride was smooth and plush; as well as energy-saving. Even though my bike weighed a hefty 54 lbs, this was never an issue other than when manhandling it to get it on chairlifts. (If you look pathetic enough, the ‘lifties’ will usually give you a hand…).

I’d initially thought the considerably extra heft of an e-mountain bike would detract from the fun, nimbleness and manoeuvrability of the machine, but I really didn’t notice it and had an absolute blast on the well-designed; undulating single track for which Les Arcs is renowned. I’d even argue that the extra weight of the bike made it less skittery on loose gravel; and when landing jumps. 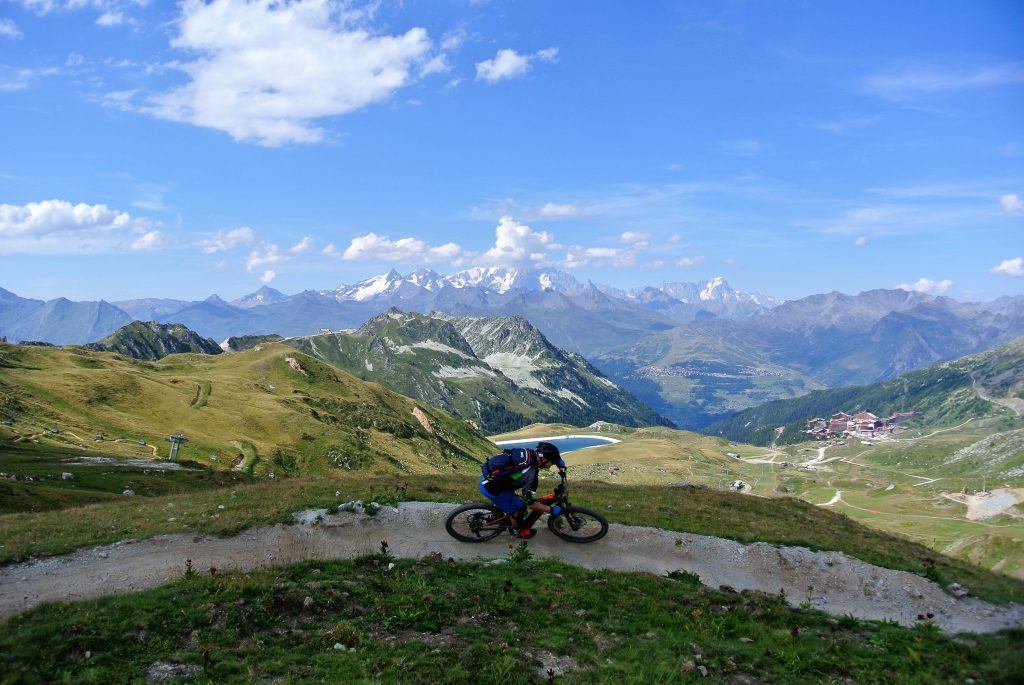 So, after that first run down to Arc 1800, I spent a hot, sunny August afternoon blasting around much of what Les Arcs has to offer. There are 180-km of bike trails in the Les Arcs ski area, designed so that there’s something for everyone; from families to hardcore downhillers. The combination of generally warm and sunny conditions, dusty dry single-tracks, and terrain that varies from open, alpine rock gardens and meadows to shady forest single track, often with a backdrop of Mont Blanc, is world class.

But nothing is perfect of course, and unfortunately, the ski lifts that access this superb riding are only open through July and August; but here’s where you get the really big bonus of riding an e-bike. Once the lifts close, you can still enjoy the trails without the slog of riding up them or organising motorised (and eco-unfriendly) uplifts. 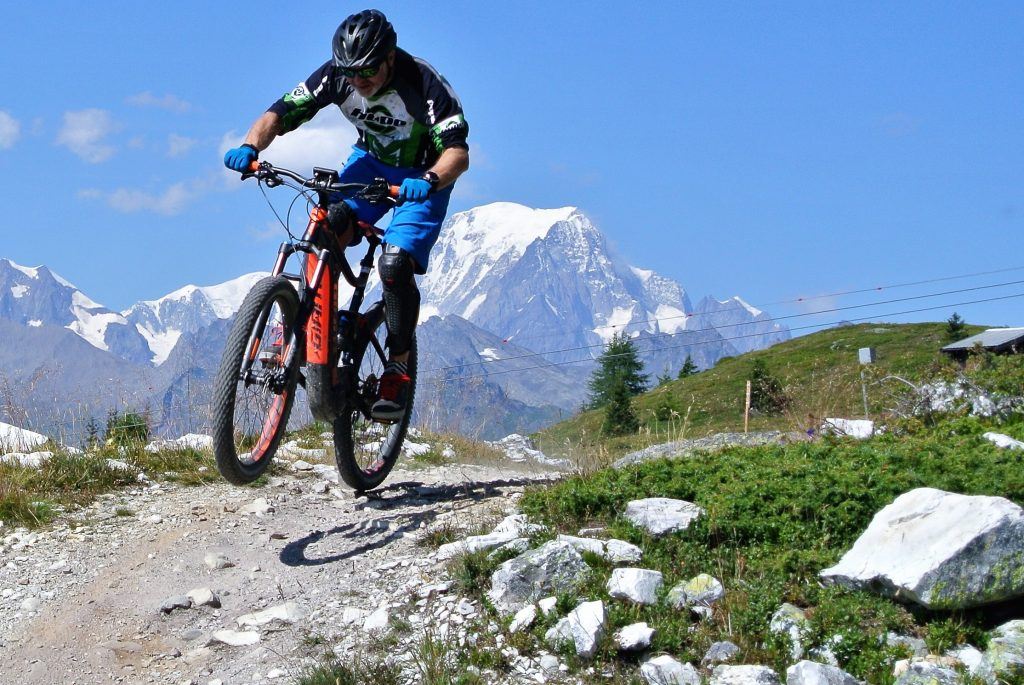 I’m fortunate enough to live literally right beside Les Arcs’ ‘Route 66’, a 26-km enduro trail with 1937-metres of downhill. Once the lifts close, I can’t say I especially enjoy riding up it to access all that downhill on my regular mountain bike; an Orange Five.

But on an e-bike it’s a cinch; so much so that it actually gets you out riding more – literally. Lyle Metcalfe of British e-bike manufacturer Volt bikes says:

“It’s been statistically proven that e-bikes get up to seven times more usage by their owners than conventional cycles, so you may actually get more exercise as an e-bike user if you choose a balance between assisted-power and your own power when riding”.

The Future Of E-Bikes

That e-bikes are the future of cycling is backed up by the sales figures. In Holland and Germany, they now represent roughly 25% of all bike sales; with some 900,000 having been sold in Germany in the last year. China currently has the world’s largest e-bike user figures; with in excess of 200 million people riding them.

Sure, a major percentage of those bikes will be used for little more than bimbling down to the shops, but anyone who rides on the trails around the Alps will testify that the number of e-mountain bikes is increasing each summer.

The purists and sackcloth brigade will be appalled of course, but when e-bikes are so much fun and open up so much more terrain – especially after the lifts shut down – I reckon there will be a lot more ‘electric bike smiles’ on the trails in future.

Rad Season is providing you with rentals and hotels at the lowest prices available online. Book your stay near Les Arcs, France using the map below!