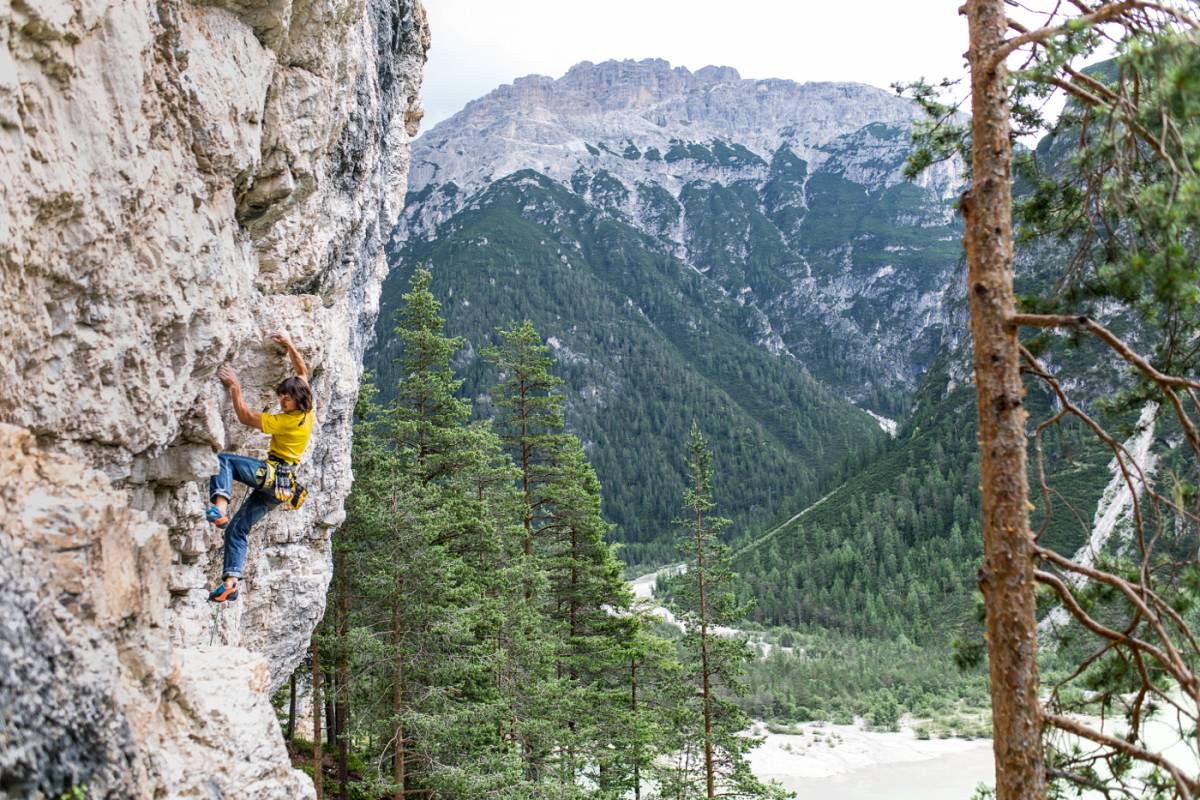 Rock Climbing in Italy: Where and when are the best events?

Nothing makes you happier than spending a day out at the crag or bouldering with friends, pushing your limits and sending routes. Throw in some breathtaking landscape, amazing food and a luscious glass of wine at the end of the day, and you pretty much have it all. I’ve got one word for you: Italy. Here are the 10 best events for rock climbing in Italy happening between now and December around the country, where you’ll find exactly all of this – and more. Time to start packing! 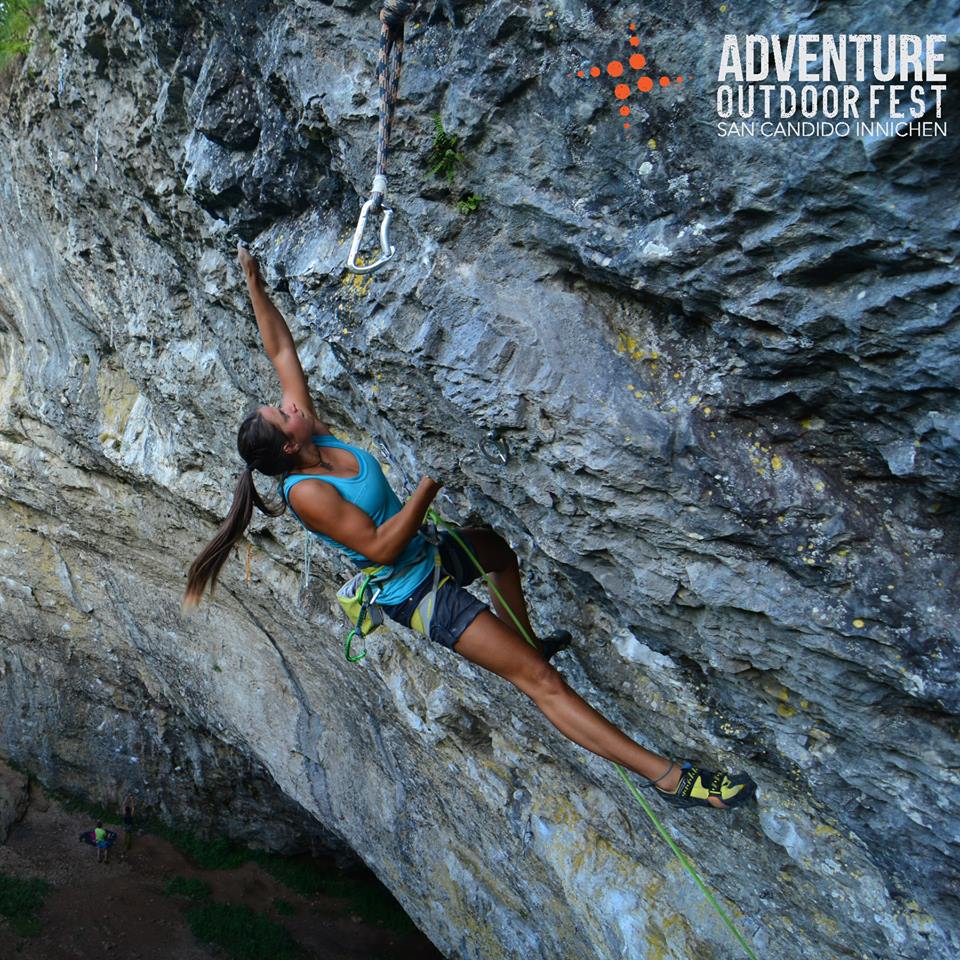 The Adventure Outdoor Fest is just around the corner– if you are already in Italy or even just a few hours away, you should be heading there right now.

The next Edition of the Adventure Outdoor Fest will be held in a small picturesque town immersed in the beautiful scenery of the Dolomites. San Candido is one of the oldest villages of South Tyrol and is an undisputed destination for all mountain and outdoor sports lovers, both in winter and summer. The festival takes place in this heavenly location at the foot of the Tre Cime di Lavaredo, rich in art, culture and natural beauty.

We are talking 5 days filled with outdoors activities, ranging from hiking and yoga to slack lining, and of course bouldering, urban climbing and rock climbing contests. 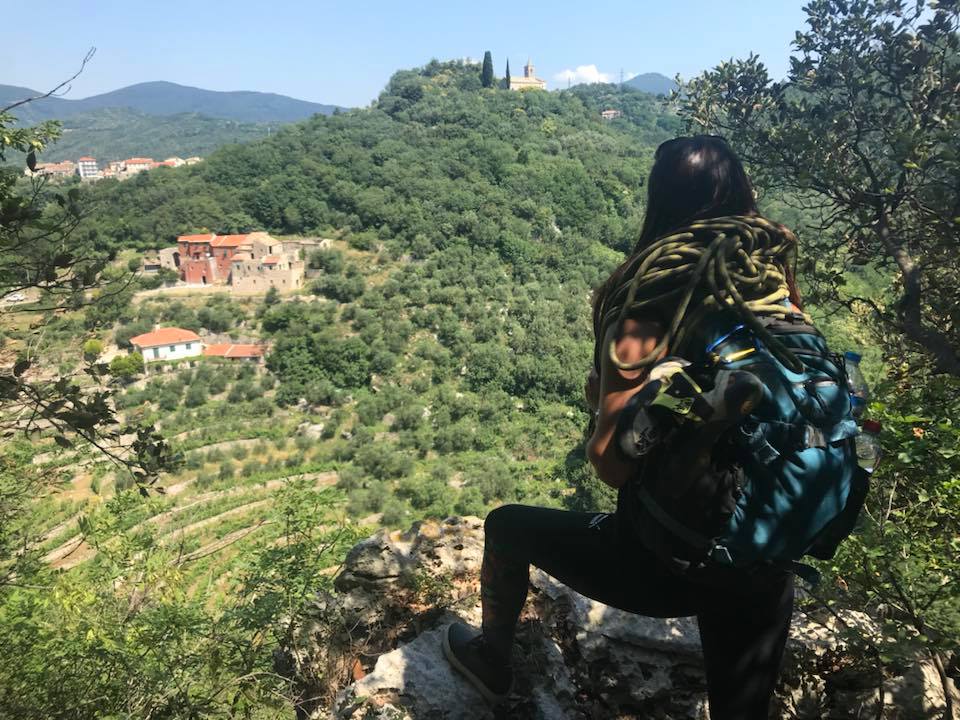 An event specifically designed for women who climb (but men are welcome, too). What you’ll find here: pro slack liners performing tricks on a 100 meter-long line, an on-sight boulder contest on actual rock (you can take part too), and a special guest – Iranian rock climber Nasim Eshqi, who left her home country – where indoor walls are segregated by gender and climbing as a sport is still in its infancy – to pursue her passion and coach other girls.

The spot is one of my personal favorites, and is also right on my doorstep at the moment.

Monte Cucco is the most important climbing sites in the Finale Ligure area, offering over 270 routes and 9 sectors. This area was first climbed in the sixties and the place has grown in popularity ever since. Today it’s internationally famous and a must for any climber who visits the area.

Bonus point: Just a few minutes from the event location you’ll find Finalborgo, one of Italy’s most beautiful medieval villages, now almost exclusively populated by climbers and bikers. Soaking up this atmosphere with a beer in hand after a day out at the crag is always a must.

Bonus point 2: All this is just 10 minutes away from the seaside, too. Are you packing yet? 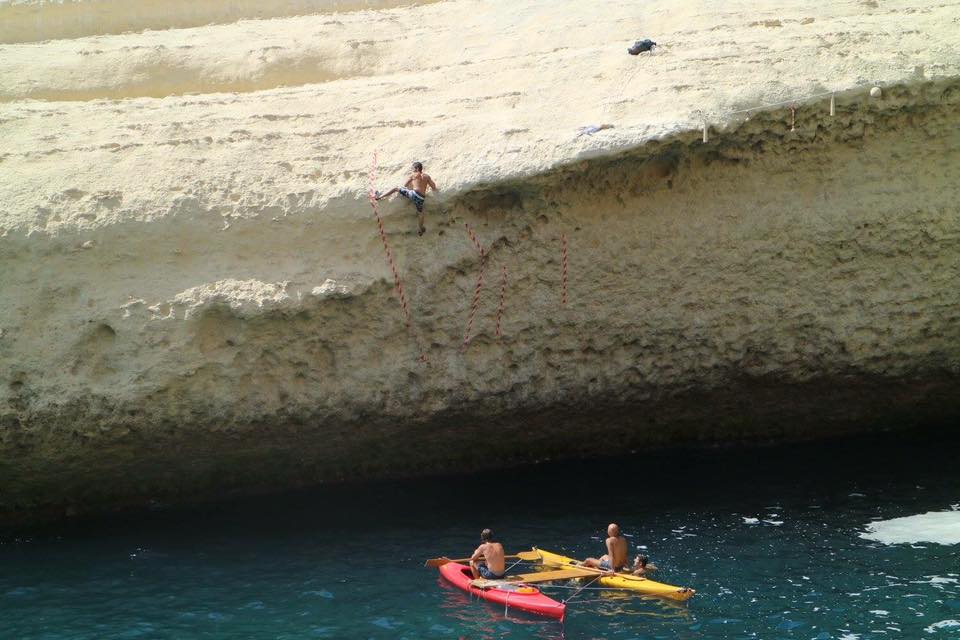 Crystal-clear waters, waves, rocks, SUP, breathtaking landscape and deep water soloing: the 6th edition of the Zestos Psico Blocevent is coming, and it’s happening on the shores of Sardinia.

The contest takes place on the sandstone cliffs overlooking the sea in ​​the beautiful bay of Santa Caterina di Pittinuri, in the province of Oristano. Traditionally a popular destination for surfers from all over the world, climbers gather in the inlet of Sa Culumbera to climb a natural cave over deep emerald green water.

Discover a unique island, swim in beautiful sea and experience the freedom and maximum expression of mental and physical balance of deep water soloing. Check out last year’s teaser to get a glimpse of what’s to come here. 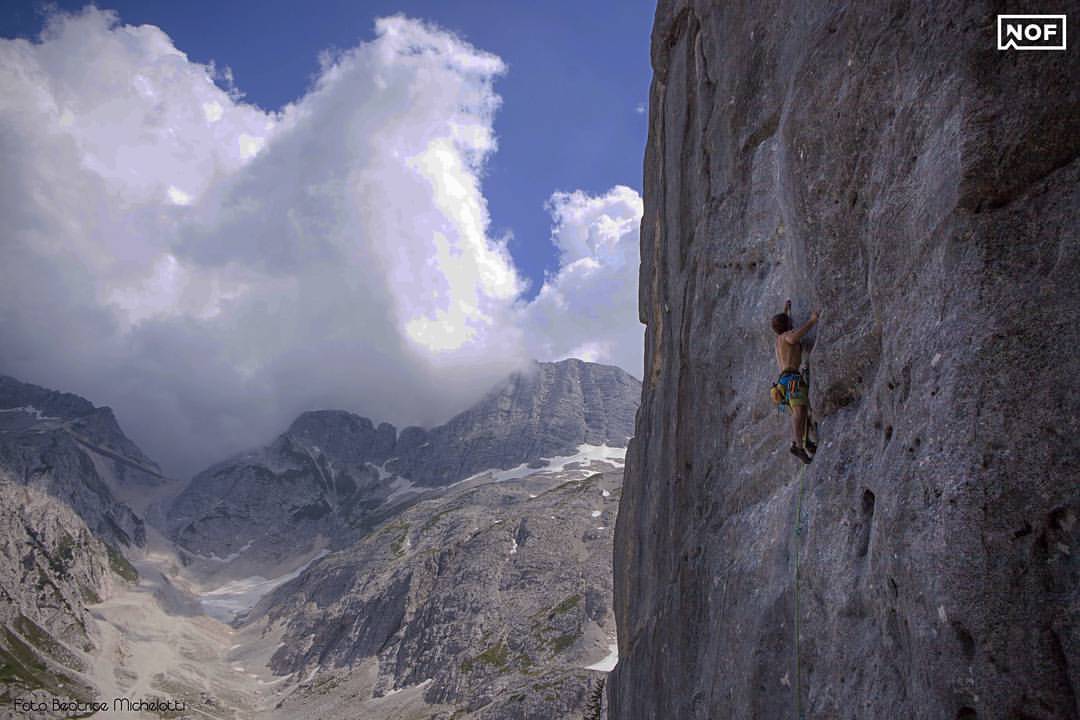 This is the biggest outdoor festival in the region of Friuli-Venezia Giulia in the north-east corner of Italy, just a short distance from Austria and Slovenia.

NOF takes place at 1850m above sea level, in the beautiful area of Conca Prevala and Mount Canin. With such a rich program and friendly vibe, NOF 2018 is just the place to be on the 20th of July this year.

A word on accommodation: Bring your own tent and join other happy campers at high altitude by the Mountain Hut Gilberti or, if it’s creature comforts you’re after, pre-book your accommodation in one of the structures in Sella Nevea.

Check this video for a taste of last year’s event and start planning your trip! 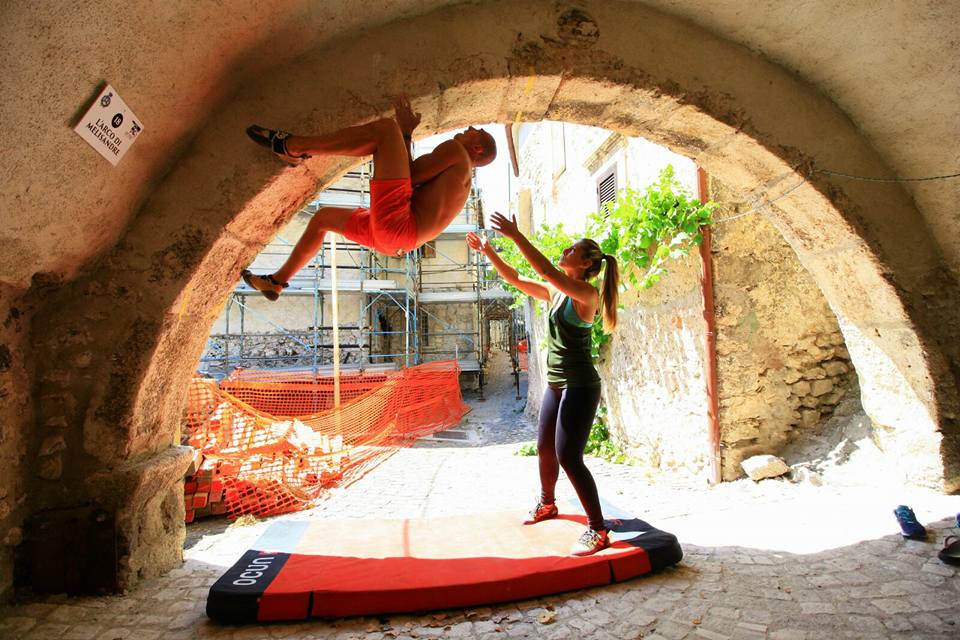 Did someone say urban climbing?! Now in its second year, the Street Boulder Castel del Monte festival is an amazing event where you can climb the buildings, stone archways and towers of this medieval and Renaissance hill town in the province of L’Aquila,in northern Abruzzo, Italy.

Castel del Monte is one of the most beautiful Italian towns out there. Here’s your chance to see and climb this Italian beauty. 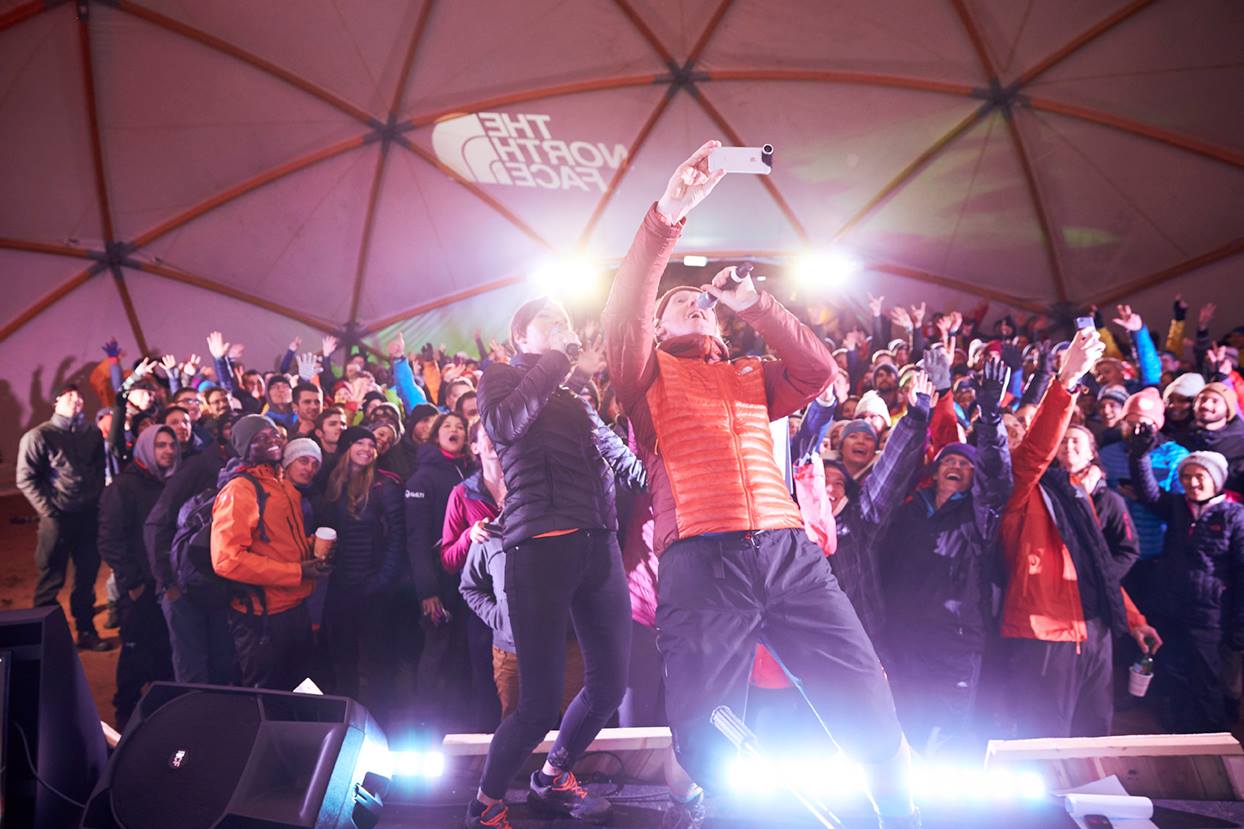 Since 2006, The North Face has been putting together a mountain festival weekend full of activities, music and events for those adventurous at heart. After hitting Switzerland for its last 2 editions, this year and for the first time it’s taking place in Italy.

Base camp is located in Val San Nicolò, a magnificent valley in the Val di Fassa basin, located in one of the most famous mountain districts in Italy: the Dolomites. The nearby villages of Val di Fassa, Mazzin and Vigo, are within easy reach. If you’re not traveling by car, it’s recommended you hop on a short 15-minute taxi ride from Val di Fassa.

The program: an unforgettable weekend packed with adventure and adrenaline surrounded by nature, with activities such as climbing, walking and trail running on breathtaking alpine paths – lead by The North Face® athletes and local guides.

The ticket covers all meals, excursions, workshops and presentations, as well as evening entertainment and camping, including the use of all facilities on site. (You need to bring your own camping gear, such as a tent, etc.) 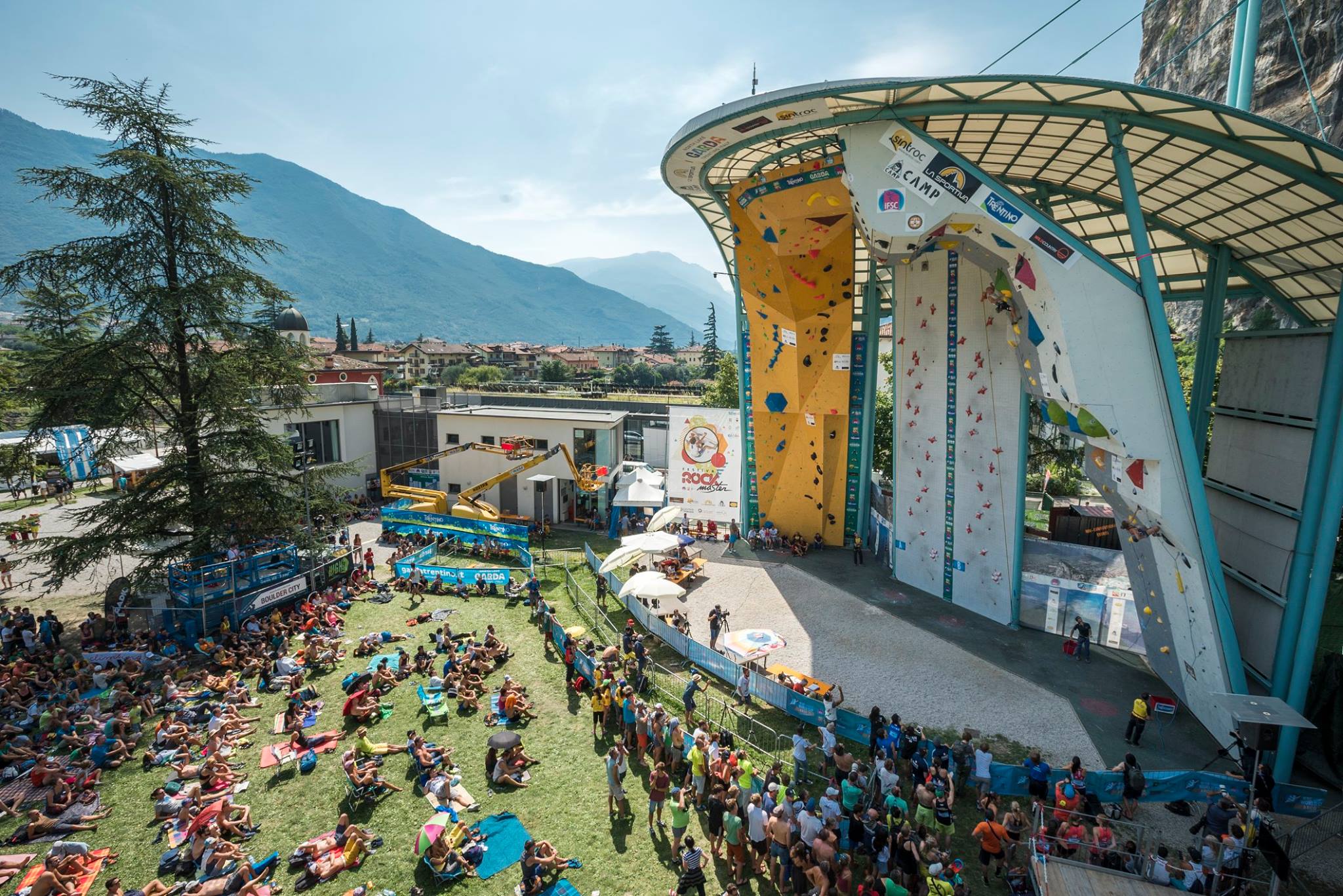 Arco is one of Italy’s climbing most renowned areas and is home to one of the best climbing communities of the country.

Arco Rock Master Climbing Festival is the only event in the world that has lasted for more than three decades and has seen the greatest climbers in the world competing in a mix of sport and entertainment.

During both weekends, you can watch or take part in slack lining, urban climbing, bouldering, lead climbing and speed climbing performances and contests, including the IFSC CLIMBING WORLD CUP for all disciplines.

There were over 8K climbing enthusiasts – from 35 different countries and all 5 continents – at Rock Master’s 2017, and this year’s edition is bound to be amazing. 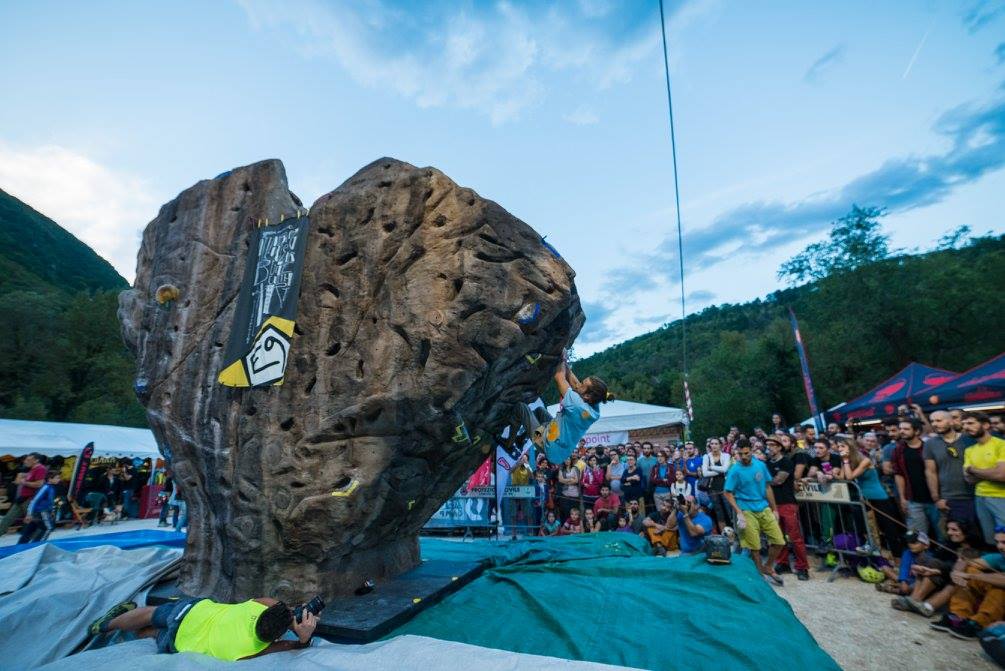 Have fun with urban climbing, bouldering, lead climbing, slack lining and “warrior” contests you can take part in. Plus, download the Vertical Life app and log at least 300 meters of climbing to be in with a chance to win special prizes such as PETZL gear or a cash prize of €500.

And to top it all off—we’re in Italy remember—enjoy some incredible local cuisine and wine. 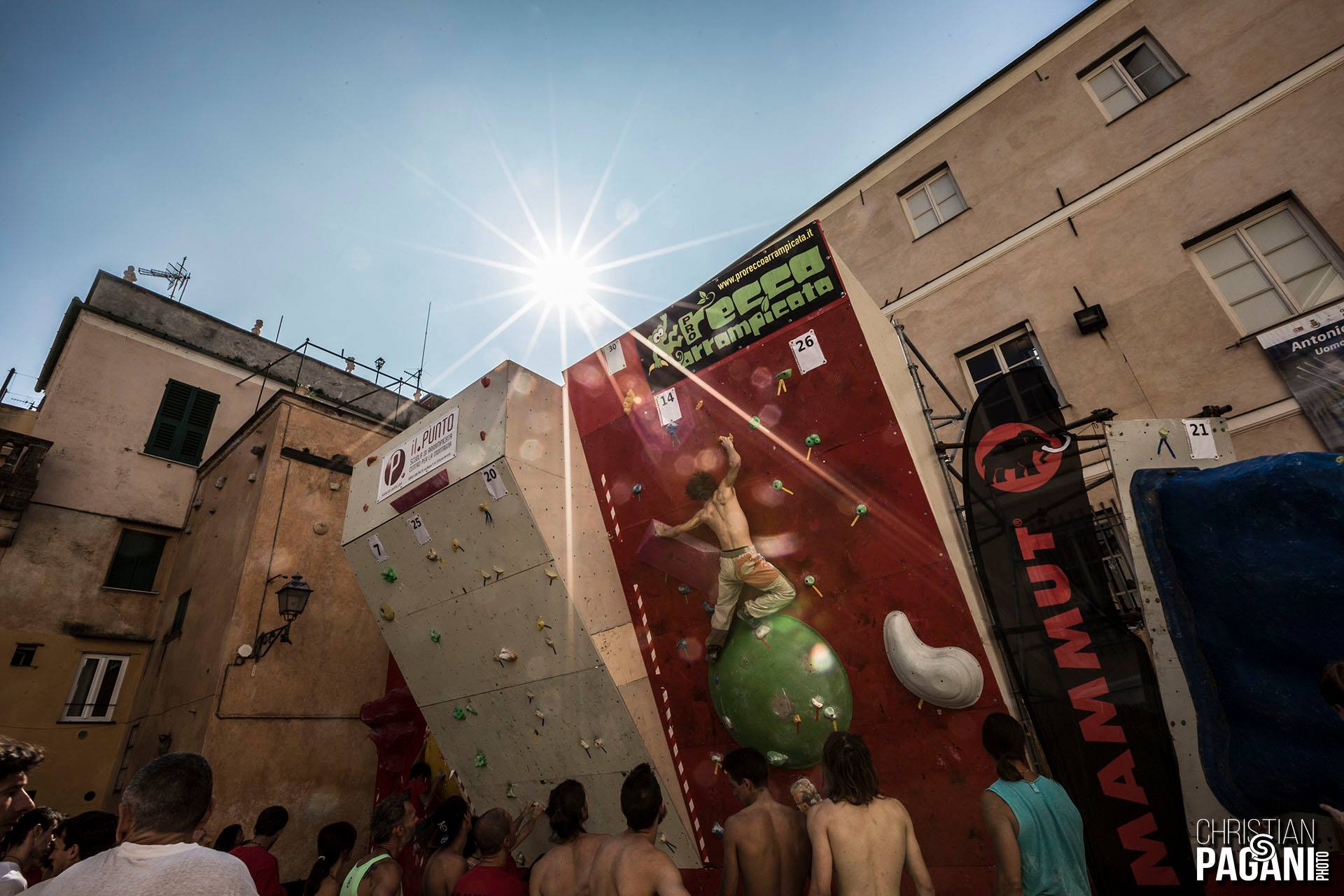 Yes, we’re back in Finalborgo. It’s that special.

Back in 2009, a bunch of climbers based in Finale decided to throw together a small party to promote climbing and help Nepalese communities, where one of them lives and works.

Fast forward almost 10 years and the event has grown into a major festival where people from all across Italy and Europe gather to enjoy rad music, food, wine, top-notch climbing all while doing a good deed. The event is currently supporting a school based in an extremely remote and poor region of Nepal, providing education of over 40 kids, and a project called “Green Soldier”, helping to clean up Kathmandu and Himalaya’s trekking routes.

At the event, you’ll meet a very varied and fun community of climbers and bikers, enjoy Nepalese and Italian cuisine and take part in climbing and bouldering contests. 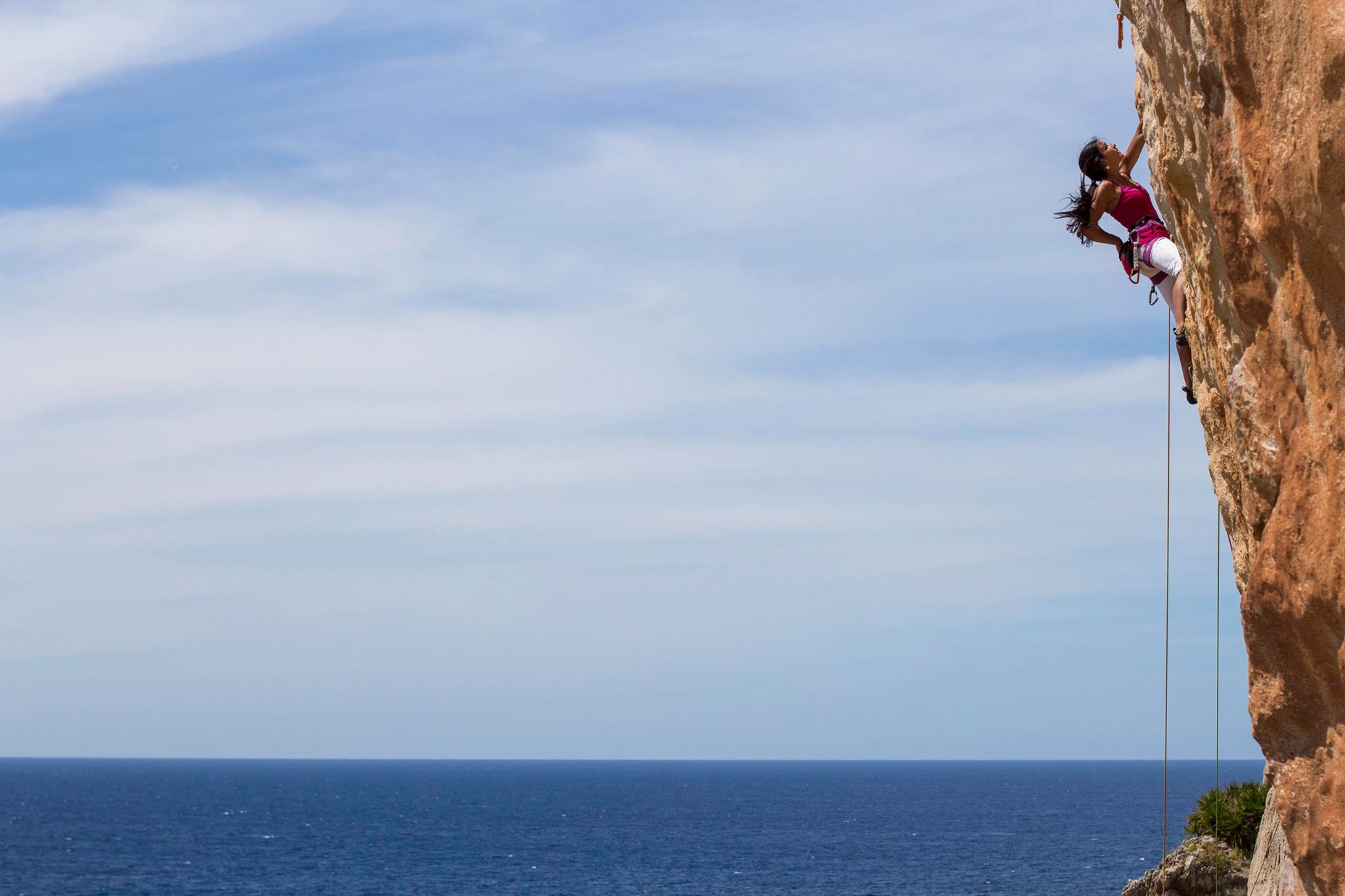 The San Vito Climbing Festival is possibly the biggest and most exciting multi-sport event happening in the Mediterranean. This truly international event gathers hundreds of climbers, runners and mountain bikers from all over Europe, to let them compete on crags, trails and waves of one of the most enchanting gems of Sicily – the wonderful area of San Vito Lo Capo.

For the 10th year in a row, the whole territory of San Vito Lo Capo will turn into a huge competition field taken over by passionate climbers. We’re talking beach side events, dream weather conditions and a true paradise for climbers, with an impressive number of sport climbing routes (almost a thousand) on limestone rock. Enjoy the show or compete on bouldering and lead climbing contests with breathtaking views of the blue sea waters.

Plus: it’s all taking place in Sicily, which is basically a synonym for amazing food and hospitality.

Staying in Castelluzzo, in the Valley of Olives, a few minutes from the coast and the cliffs will certainly be the most convenient choice for reaching the climbing crags and at the same time enjoying the tranquility of the small village and its unique natural environment.

Check out what happened at San Vito Climbing Festival: 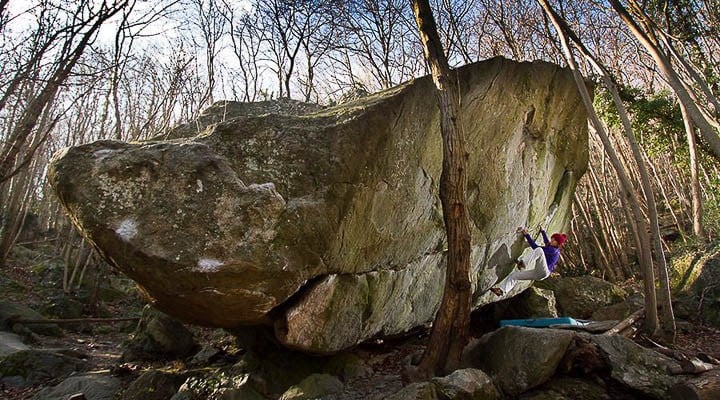 The BluBloc competition has been held in Alpicella, Varazze – an internationally renowned bouldering area – since 2014 and never fails to gather a couple hundreds climbers. The event location, completely immerse in nature, is just spectacular: you’ll be competing on a multitude of boulders scattered across the woods and along a beautiful river, that farms small lakes and waterfalls you can bath in after a day out climbing. Difficulty: all level, including some tough stuff (8C+ and up).

At the end of the competition, there’s going to be lottery games and prizes will be drawn in climbing gear.

Then, lots of “focaccia” (special, traditional Italian flat bread that people from this region are famous for) and why not, a nice swim in the sea – also just 10 minutes away from the event location.

When: October
Where: Alpicella, Varazze (Liguria, North-West)
Ticket: 15 € (to compete)

Read more about hiking in Italy: 8 of the best trails in the north and beyond Pizza: 6 of the craziest Italian festivals

Martina is an Italian and Swiss Italian translation professional and founder at www.theactionsportstranslator.com, a specialised multilingual translation service that works with cutting-edge brands in the adventure sports and outdoors industries. When she isn’t opening the doors of new international markets, Martina can normally be found outdoors climbing a mountain or snowboarding down one. She is a real outdoor junkie and has lived in over 12 countries across 4 continents for the past 10 years.