Nate Menninger, the First Foreign-Born Porter on an Everest Expedition 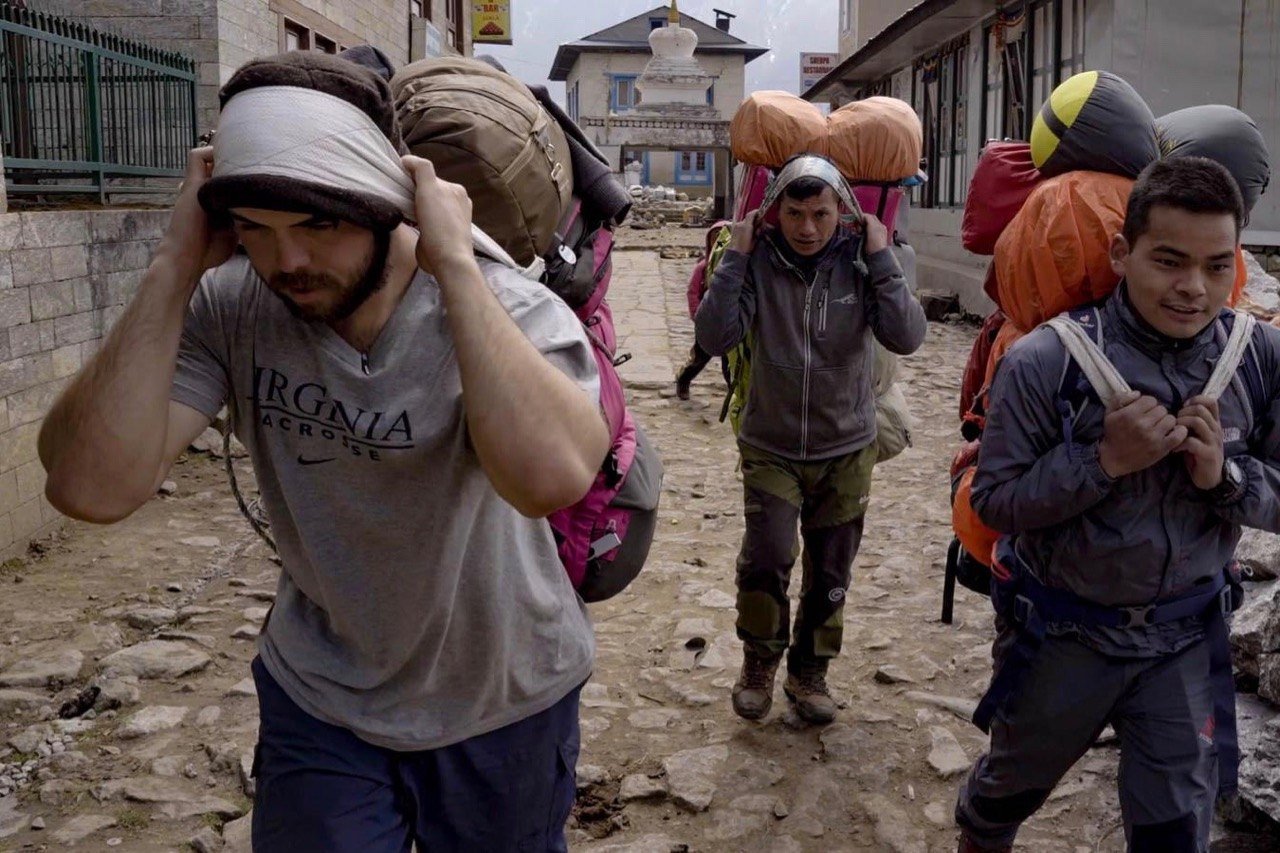 Nate Menninger is an Adventurer, Film Producer, Founder of PathFinder Creations and the First Foreign Porter at Everest

Growing up in Boston, Nate Menninger was lucky enough to travel from a young age. He studied at the University of Virginia and played Varsity level Lacrosse. At 20 years old as a sophomore in college he made his way to Spain for the  Running of the Bulls. He had always travelled but never like this.

He fell in love with the not only doing something extreme but doing it in the most extreme and local way possible. Ever since that summer he went away doing these trips. After graduating he booked a ticket to Argentina with his snowboard and saxophone and for 6 months lived over there in extreme poverty. He went backcountry skiing in Chile and even lived in a favela in Brazil.

Menninger devoted himself to the notion of extreme adventuring. He taught himself Nepalese. He had no money but wanted to go to Nepal and ventured to Katmandu. After 2 weeks in a hostel he meet Babin Dulal and the idea of filming a documentary on becoming a Himalaya Porter to aid a mount Everest expedition was born. He set out for a month to do the trip and immersed himself in every aspect of porter life.

Tune in to find out from Nate what is was really like to be foreign porter, the physical challenges and behind the scenes of filming ‘The Porter: The Untold Story at Everest.’

Oli Russell-Cowan: When you left Brazil did you then go back to the States before you went to Nepal? You kind of had it in your mind that you were going to push it deeper.

Nate Menninger: I made that link between the Running of the bulls and the diving and the skiing and the favela. I was like, Alright, this is what I’m really freaking vibing with life, right. But I was vibing with life, probably because I was so poor that these were complete opposite. And I just picked them out. They were probably a little too high.

I came back tried sports again. And because of that my body had kind of recouped and then failed. And I was like okay, the whole point was to play football, dropped out of some place before I even played football. 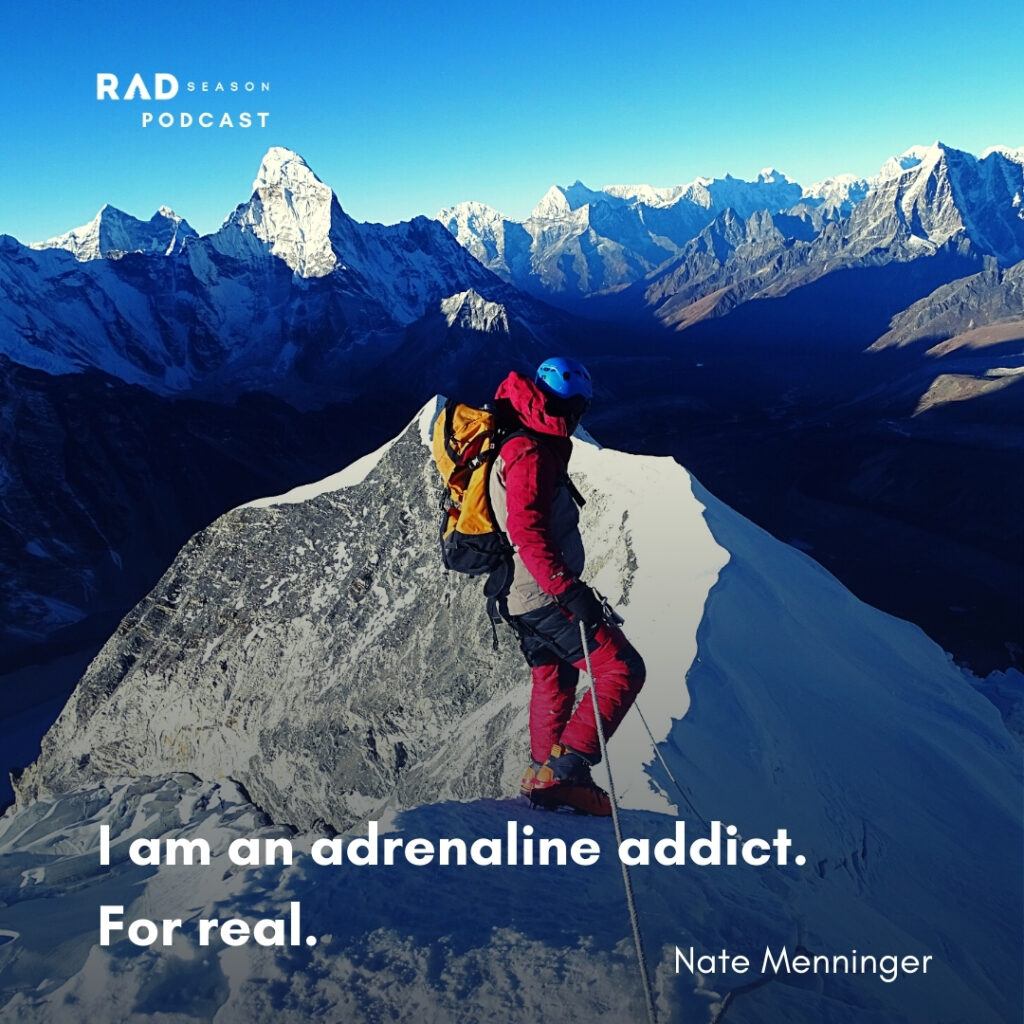 Nate Menninger: I’d gotten a scholarship and stuff. That stopped, I dropped out. I didn’t waste any money really just time and I was like, this is what I’m going to do.

I’d go from furthest Western point of Asia to the eastern point on a motorcycle. I’ll go through Afghanistan the most dangerous places that I can see and that will be it. I need to make a film about this. I launched a whole thing and that just completely fell through.

I went to DC to get the visa as I thought and that fell through. I got a job and raise a little money and eventually the boiling point came and I just pulled the plug. I was like you know what would be crazy and I could do for no money? You know what I can do all my own. I don’t need a movie. I don’t need anything. I could go to Nepal and swear to noble silence in like a James Bond like monastery and I’ll do that for three months.

If I teach myself the language, I can just walk into the mountains and knock on someone’s door, and they’ll let me or I can try. That was my theory. I started learning the language, just on my own. I think I bought a ticket, started learning it, discovered that it doesn’t actually exist like that. There’s no vow of silence, there’s one and it’s 18 days or 12 days, and you can just sign up for it here in America. I was like, Alright, well, I’ll do this one in Nepal, I’ve already bought a ticket, there it will be more natural. At this point, I’ve already either learning or learned the language, I spent three weeks stamping out the basics of a language.

The basics of the language to me are the alphabet, how you say a sentence, the sentence construction, all the rules you need to know to grow upon when you’re in a country. Because you can learn a language, you can learn words, but you won’t be learning, when someone else tells you something new, you won’t understand the prefix or the suffix, you just won’t understand.

So to me, it was like, get the basics, I’ve got the basics, that’s enough to learn more. And then go and there’s this vow of silence, I have to sign up. So it’s not as cool as it sounds, but I’ll just figure it out. And maybe I’ll try and go ice climbing after. So I’ll prepare for that a little bit. And that will be another challenge. And then I’ll write and I did both those things.

That was the first time I got into mountaineering. I’m not a mountaineer, I just did it because it sounded crazy.

Then I settled down to write. And then I realized, at this point there was no point in just doing all these things myself without sharing them with the world. And the story goes that,

like, just no one would? Also, who would read it? No one, like I didn’t even read. I don’t read. So why would someone read mine? You know, even if it is a really great book no one’s gonna do it. So I need proof. I need visual evidence. And I need to become famous so that people actually buy my books. So those two reasons.

I needed a camera. So I changed my life to try and get this proof. And that’s probably why I started stepping off the way. That shortcut. It was that shortcut I wanted to take to becoming famous. Not becoming famous but, being like an operating human being like you. I can sustain myself. People are buying my books. So I have income and I can do what I love.

Wanting to be a writer

Russell-Cowan: Was it always writing, was that the passion that you wanted to be a writer?

Menninger: Yeah, as my passion. Or that was what I was doing.  That’s just where I felt comfortable. I think passion is almost the wrong word. 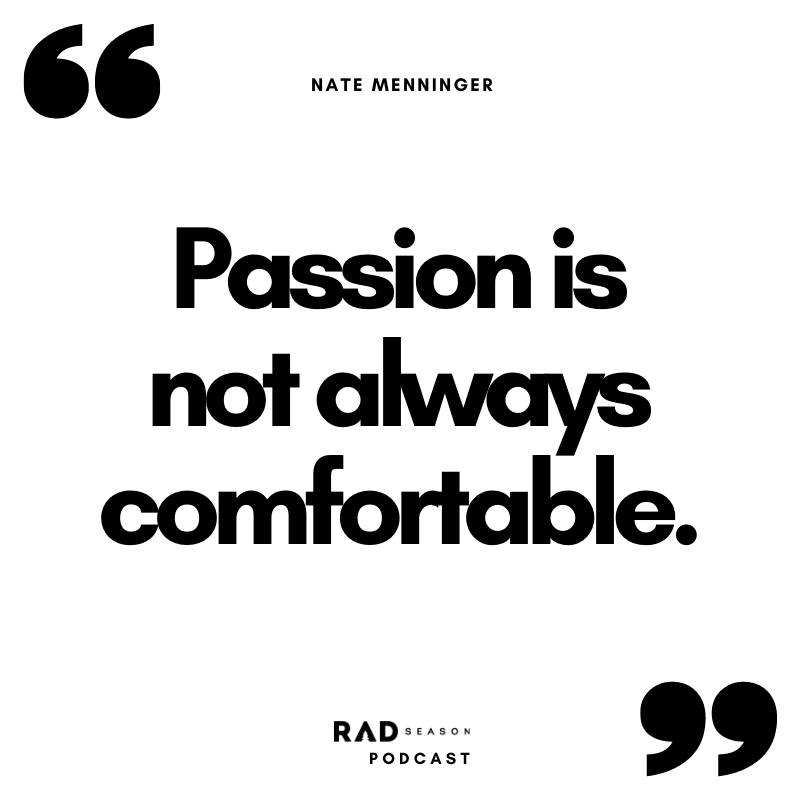 But writing was where I felt comfortable. Passion was doing this exploring and stuff like that. I built my life around that and had a bunch of crazy experiences.

That falling through and eventually being like,  I’ve got to launch my own thing, but having no idea what that meant. No idea what a film was no idea that I’d even make a film.

I had a semblance of a vision for an hour long and HBO like serious thing, but I didn’t really care. You know, I just needed proof, anything. I barely raised a bit of money, very manic at the time. Took off to Nepal for my first project, which would be my first filmed project. Maybe my last.

I decided I’ll just get to Nepal try and climb Everest as a porter because I’d been a guide there. The story goes that at first time in Nepal, right, I got there I did a little climbing. I learned the language that got me a job with Nat Geo where I got to get my series. The job with Nat Geo put me in contact in Nepal because it was back in Nepal with some very high up people. Those high up people we had the idea that,

I want to climb Everest, I have no money, what if I become a porter then I don’t have to pay?

Then I could climb Everest, which is dope. Then I could make a movie and maybe we could show how hard Porter life is because it’s clearly pretty hard. But I just want to show it’s hard. And that I can do it. You know, like, because I’m hard, because I’m strong.

The Porter: The Untold Story at Everest

Good, that will be my third thing. That will be it. So when I launched this project, it was because I had that connection that I felt the confidence was because of someone I met on my first trip that I thought could film. It’s  because all these things that I finally felt comfortable launching it. And then, of course, most of that just fell through. Because I was crazy and I ended up in Nepal.