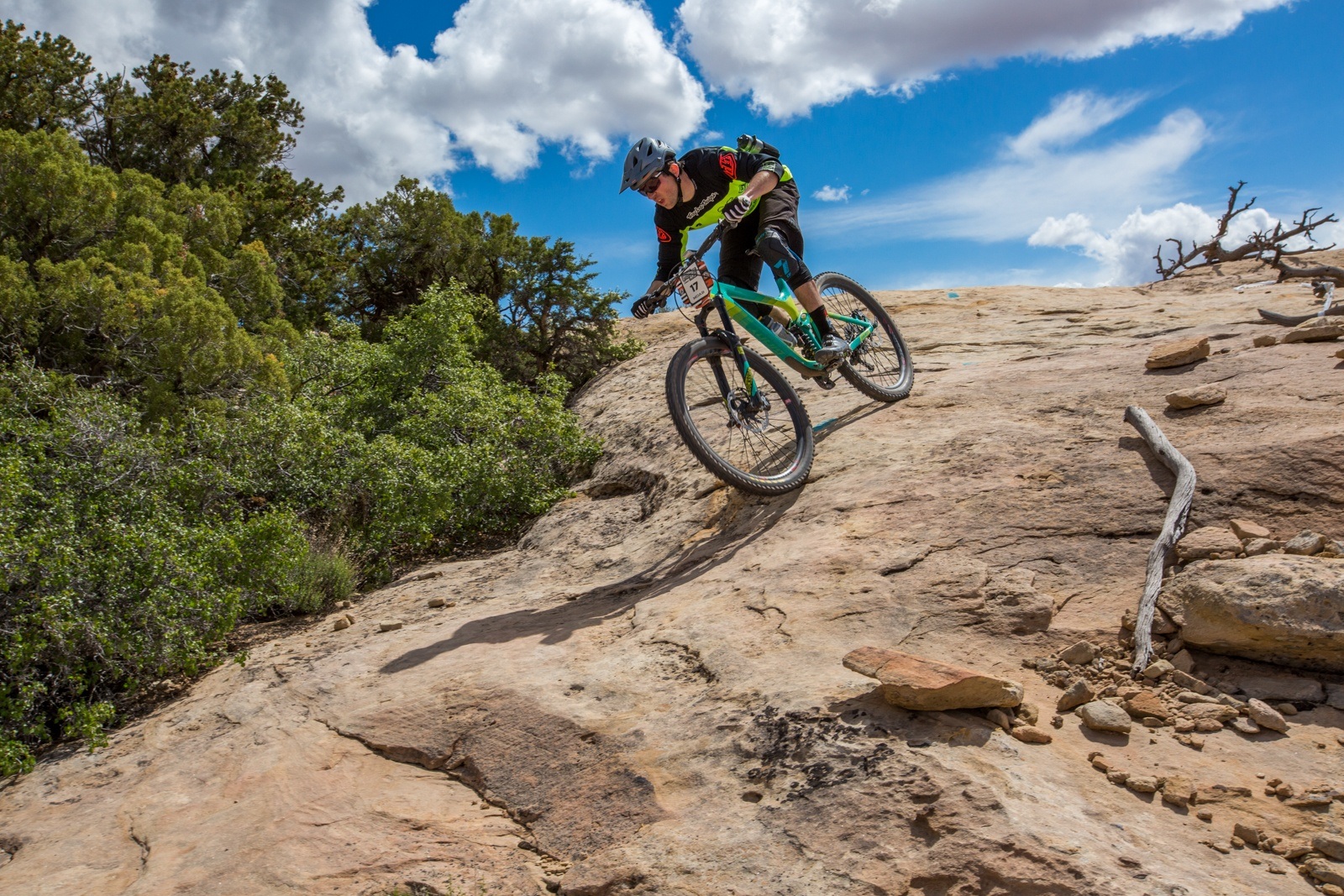 If you want to see mountain bikers hauling themselves at high speeds on downhill single tracks, look no further. It is the beginning of Enduro season and you won’t want to miss seeing these prime athletes in action.

The first stop of the 2016 SCOTT Enduro Cup presented by Vittoria saw 250 competitors this past weekend in Moab, Utah. The race was sold out at this venue and saw some intense weather over the days of the event. However, the competitors were not put off by the grey and thundery skies. The desert hills came alive with enduro mountain bike racing, tailgate barbecues, raffles and awards.

The SCOTT Enduro Cup is open to pros, amateurs and juniors and was held at the Klondike Bluffs for the second year in a row. The race was classified into five different groups, separating the women and men. The racers were placed in either pro/open, experts, vet expert (ages 35+), amateurs and juniors (ages 13-18). This means that the event was open to just about all demographics, as long as you remembered to sign up on time. Those riding in the pro/open and expert categories were competing on a descent of 3,000 feet over 29 miles of slickrock. The race was reduced to 25 miles for the amateur and junior categories. 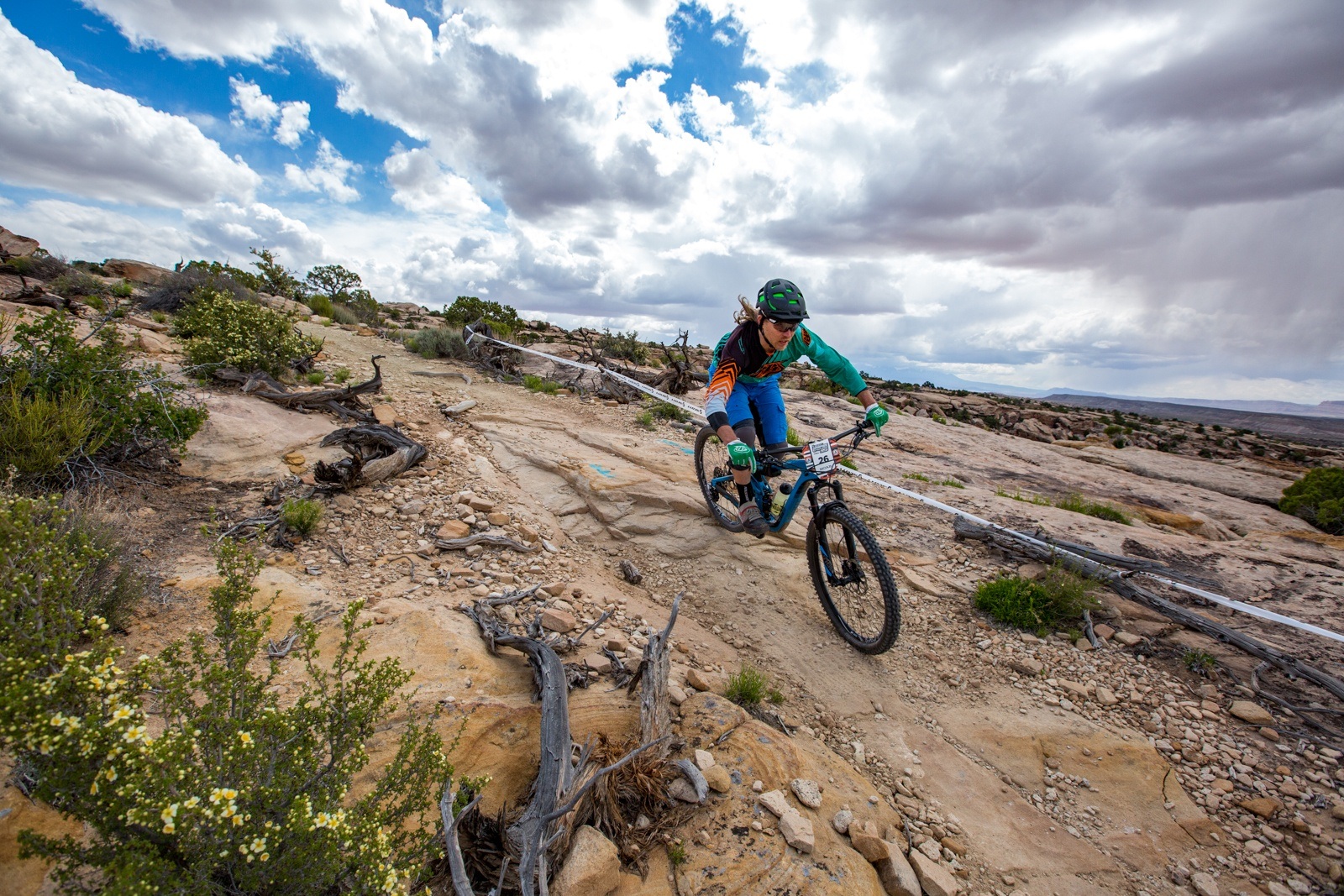 Katie Compton, 37, of Colorado Springs CO,  took first place in the pro/open women’s division for the second year in a row. Her time, 24:12.336, was gaped by a full minute and 11 seconds by Teal Stetson-Lee, 30, at 25:01.920 who came in second place at the event. Third place was taken by Cooper Dendel, just two seconds short of Stetson-Lee, at 25:03.809. The ladies in this event pushed hard and put on a noteworthy show for the spectators. 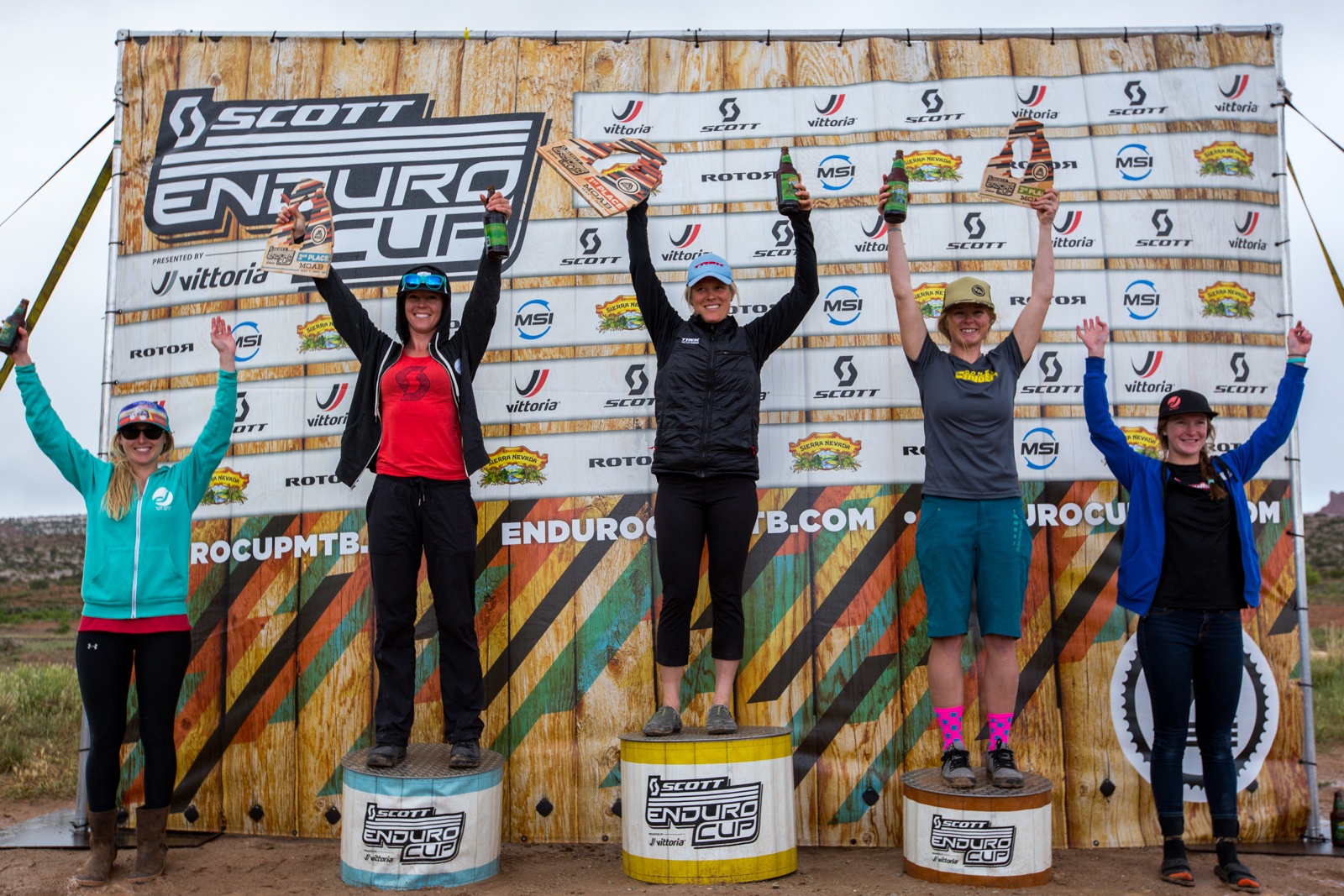 “All of today’s stages were fun and fast, and technical,” said Compton.

“The faster you rode, the more fun they were. There was a solid camaraderie between all the riders, doing the rider transitions together, and just hanging out, having a good time on bikes. That is the most important part for any cycling discipline. Slickrock is great to ride but it definitely takes it out of you.”

First place was awarded to Nate Hills (appropriately named), 39, of Keystone, CO, at 21:28.84. The men’s division barely missed the rainfall that occurred shortly after announcing the winners. Macky Franklin, who won last year’s Moab race, took second at 21:43.504 and Mike West, 41, took third at 21:54.334. The men’s race was tight in time but the pros at this event are used to feeling that kind of pressure, especially in Moab. 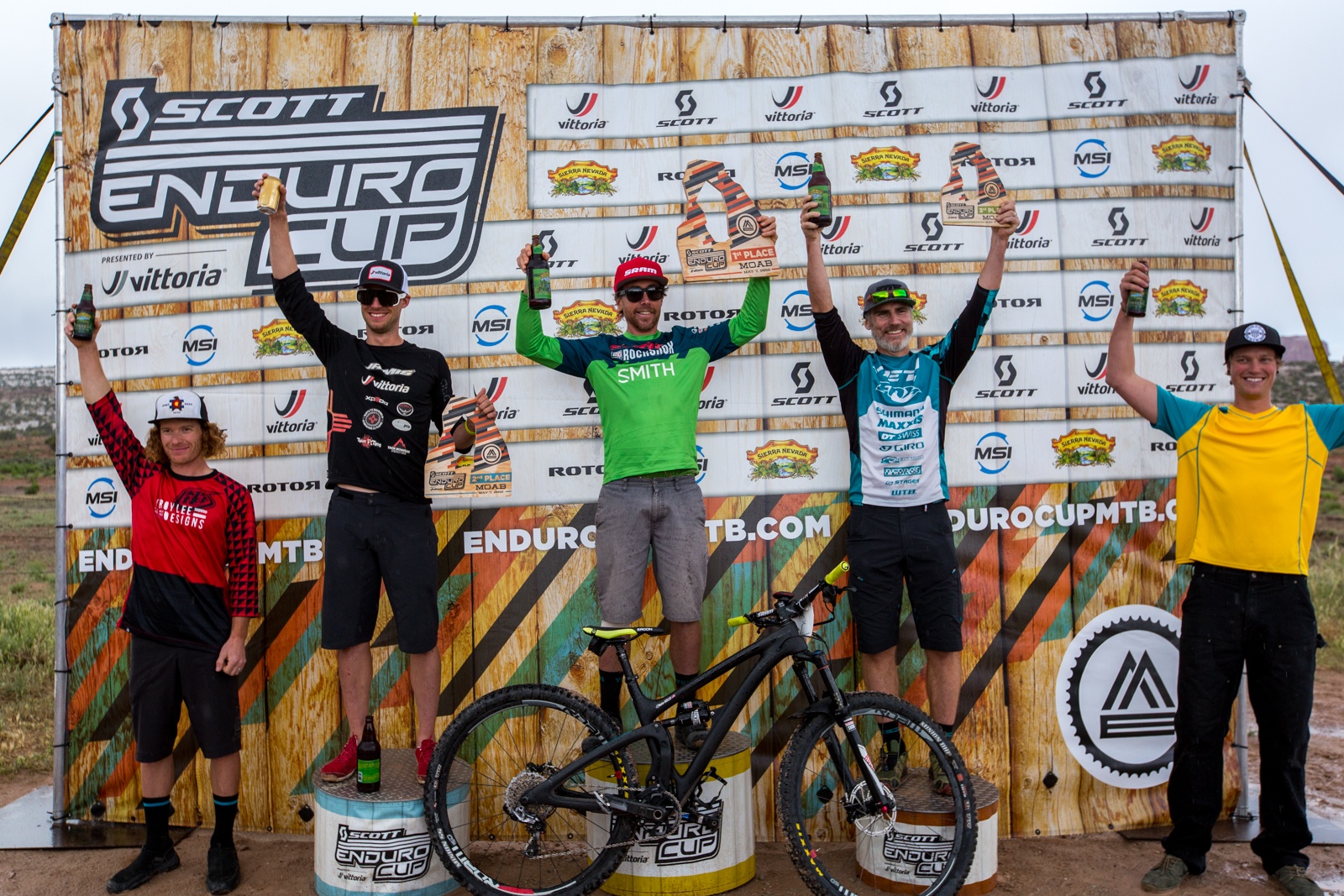 West, a mountain bike legend, had this to say about the enduro scene, “When I started biking, there was only cross country and I have always liked downhill,” said West.

“Now that I am in the enduro scene, it’s what I love the most. It is an all-around race”.

“You have to be able to pedal, you need to be fit, but you also have to have the technical skills to get up and over all the cracks and crannies that cover slickrock. Moab is great, this venue and the SCOTT Enduro Cup is a great place to kick off the season.”

A brother and sister duo out of Sandy, Utah both took first in the juniors category- Lauren Bingham, 13, and brother, Bryn Bingham, 14. “I have been racing since I was six,” said Lauren. “Racing with Katie and Teal, it’s amazing knowing you are out there racing the same course and just to see the pros out there [with you].”

The race served as a warm up for some that will be entering the Angel Fire, New Mexico and Sun Valley, Idaho races that are now qualifying events for the Enduro World Series (EWS) sanctioned by the North American Enduro Tour (NAET). For the first time this year, the two events will allow placing competitors to use their points from the races to help secure a spot in the 2017 EWS. 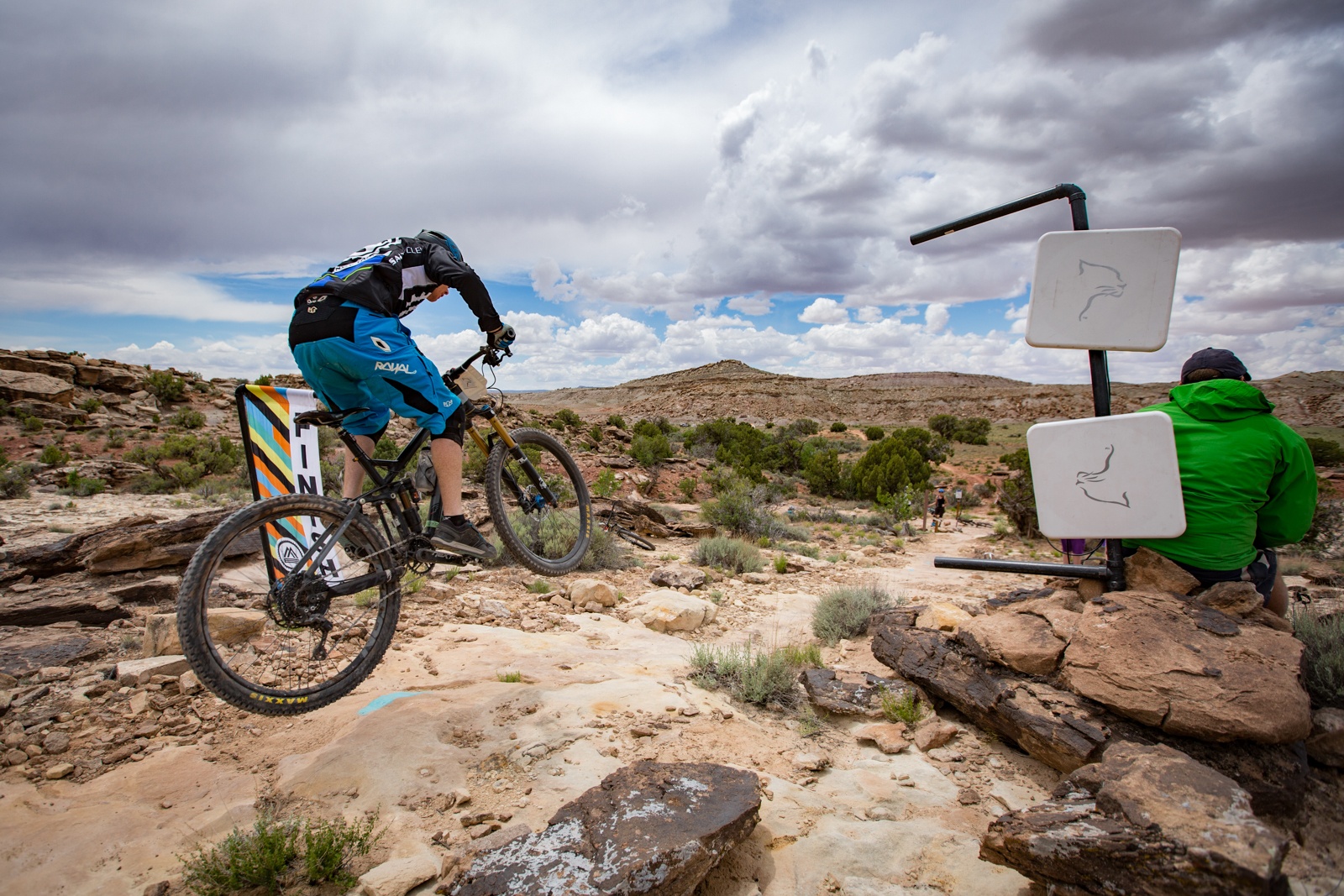 A statement released by Crankworx Events Incorporated announcing the company’s assumption of NAET, states— “NAET strives to provide the best experience possible for junior and amateur athletes in hopes of increasing the talent pool of North American all­ mountain riders. It is a platform for the best riding, and the top all­ mountain brands on the continent.”

Check out the season teaser:

Rad Season is providing you with rentals and hotels at the lowest prices available online. Book your stay near Moab using the map below!

Whitney Chandler is a freelance writer and marketeer for topics and organizations that share her passion of the outdoors, adrenaline sports and conservation. When not furiously typing away on her overly stickered laptop, she is creating her own adventurous tales to tell of the outdoors. The only thing she loves more than mountains, rivers and a fresh breeze is her beloved black dog, Boo.