Mike Rogers was diagnosed with cancer when he was just 12 years old. He started getting bad headaches behind his right eye and that was the first sign of a tumor. It was a sarcoma and he had to undertake 18 rounds of Chemotherapy.

Mike beat cancer, skateboarding every day as the Skate Park Director at YMCA Palm Springs Florida when his tumor came back 25 years later in 2003. It was the same type of cancer he had when he was young. He underwent a 17 hour surgical procedure to remove the cancer to save his life. He lost his job, used all his money and a retirement fund on his treatment. They put on a skateboarding benefit called Grind for Life to help Mike get back on his feet. The idea was born to set up Grind for Life as a fund raising event series to help people with travel expenses to get to their cancer treated.

Oli Russell-Cowan: How’s everything going over there?

Mike Rogers: I’m just here in Florida finishing up the Tampa AM, this past weekend and the level of skating has been amazing.

Oli Russell-Cowan: Was was it? You’ve been going over there for years

Mike Rogers: We’ve been doing the Grind for Life since 2004. It started in 2003. As a benefit to get me back on my feet. I’m a two time sarcoma survivor. Sarcomas are super rare, 1% of all cancers. So I’m a two times survivor of that.

In 2003 I had a cranial facial resection with a brain lift done which was a 17 and a half hour procedure and lived through it. Then we had a thing called the Grind for Life benefit. I was a YMCA, skatepark director in Florida. So we had a big benefit to help me get back on my feet. We took a lot of that money we raised that day to pay off my medical bills and started Grind for Life. 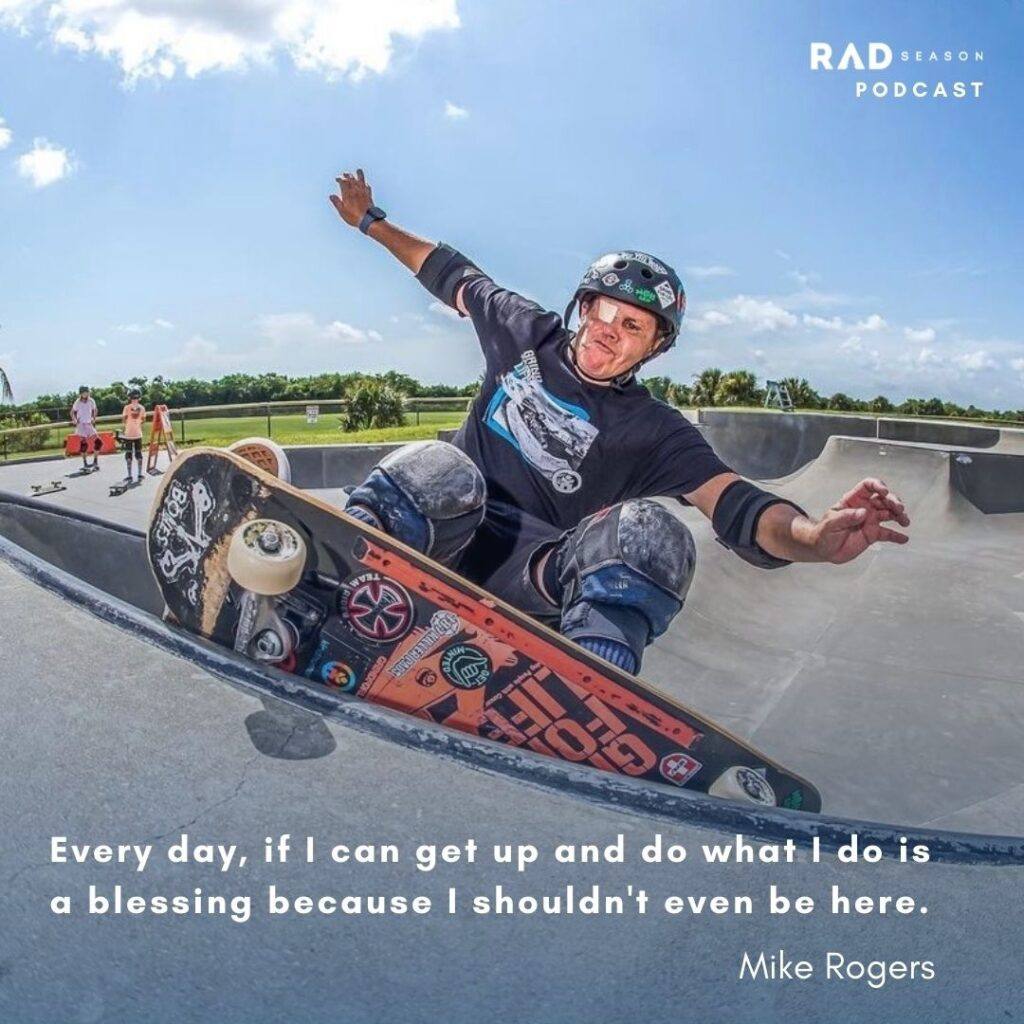 It started out as a contest series at YMCA. People were getting tired of coming to West Palm Beach and skating events there. So in 2007, we started taking over the state of Florida.

What we do at those events is we help people compete, learn how to skate contests, and then we also raise money to help people with their travel. That’s what Grind for Life does helps people who have to travel long distances for cancer treatment.

That’s what I had to do. I had to go on my fourth opinion to Memorial Sloan-Kettering Cancer Center to see Dr Singh. He goes, ‘You’re getting here at a good time. We’re three years into doing your procedure. And you’ll be the 46th person ever to have the cranial facial resection with the brain lift done.’

You could see in his eyes that he was confident about the surgery. The other doctors, I went to see not so much. I was lucky to go find a doctor in the United States. It was a long way to get to New York. I was a skatepark director, and I had all my benefits. So I was able to cash in my retirement fund to pay for my travel to get there.

I was lucky to have insurance and I was lucky to have that little bit of money to pay for my travel. That’s where the concept of Grind for Life came from is putting on super good events organised, on time. Then also help people who have to travel. We also share my story out of it. So I talk to people battling cancer or any kind of information they need. I’m really good at navigating medical, how to travel, how to get there, and all that.

I’m a modern day miracle of medicine and wellness is happiness. If you take care of yourself and skate all the time, you can stay healthy and do a lot of great things.

We’ve done over 940 events in the last 17 years over the country, all over the United States. We’ve also been down to Australia and New Zealand telling my story and I’ve been competing down there.

Rad Season is providing you with rentals and hotels at the lowest prices available online. Book your stay near Melbourne, Florida using the map below!

One thought on “Mike Rogers, Founder of Grind for Life”