Jeremy Vest is the Chief of Marketing at Braille Skateboarding. He started skateboarding back in 1986 as a kid on an Air Force Base in Germany. Careers got in the way of skating and he entered the world of digital marketing rising to the top of video marketing specifically on YouTube helping his clients reach over 12 billion organic views.

Three years ago Jeremy decided he wanted to get back into skateboarding and work in the skate industry. He met Aaron Kyro the founder of Braille Skateboarding at a conference and started consulting for them. This lead to heading up their marketing and taking Braille from a YouTube channel to one of the fastest growing skateboard companies in the world.

Oli Russell-Cowan: When YouTube first came out did you think it would take off?

Jeremy Vest: I had an epiphany for sure. I didn’t know if it was going to be YouTube or another platform. I realised very quickly, that was also around the time when the iPhone came out.

I realised really quickly that video was going to be the future of social media.

And SEO. Even back then I had that realisation. I started writing for Real SEO, which at the time was the only video marketing magazine in the world. So even back in 2006 to 2008 I was fully convinced of the power of video.

Oli Russell-Cowan: Do you think learning all the other aspects of digital marketing helped before getting into video marketing?

Jeremy Vest: Yeah, I think learning how to learn this stuff is really important. So when someone like me, goes into a new platform, like TikTok we’re really far ahead in a lot of ways. We just understand audiences and  storytelling and then we can just fit things quicker.

So for me, it’s about adapting quick, and failing fast.

I’m very good at YouTube but I’m not stuck on it. I’m like, bring it on whatever happens next. Whatever the next TikTok is I’m ready.

I think that mentality is very important. And I think my biggest strength is being able to learn quickly. Things change every day.  People are making money on Instagram reels in the last few weeks through these things called ‘Bonuses’. That didn’t happen three weeks before now. So things literally change every day.

You’re either a fixed mindset where you think it’s going to be one way or you’re more of a flexible mindset and you just roll with it. I think skaters are very good to adapt like that. And they just kind of roll with the punches better. So a lot of the best digital marketers and video marketers that I know are actually action sports people. 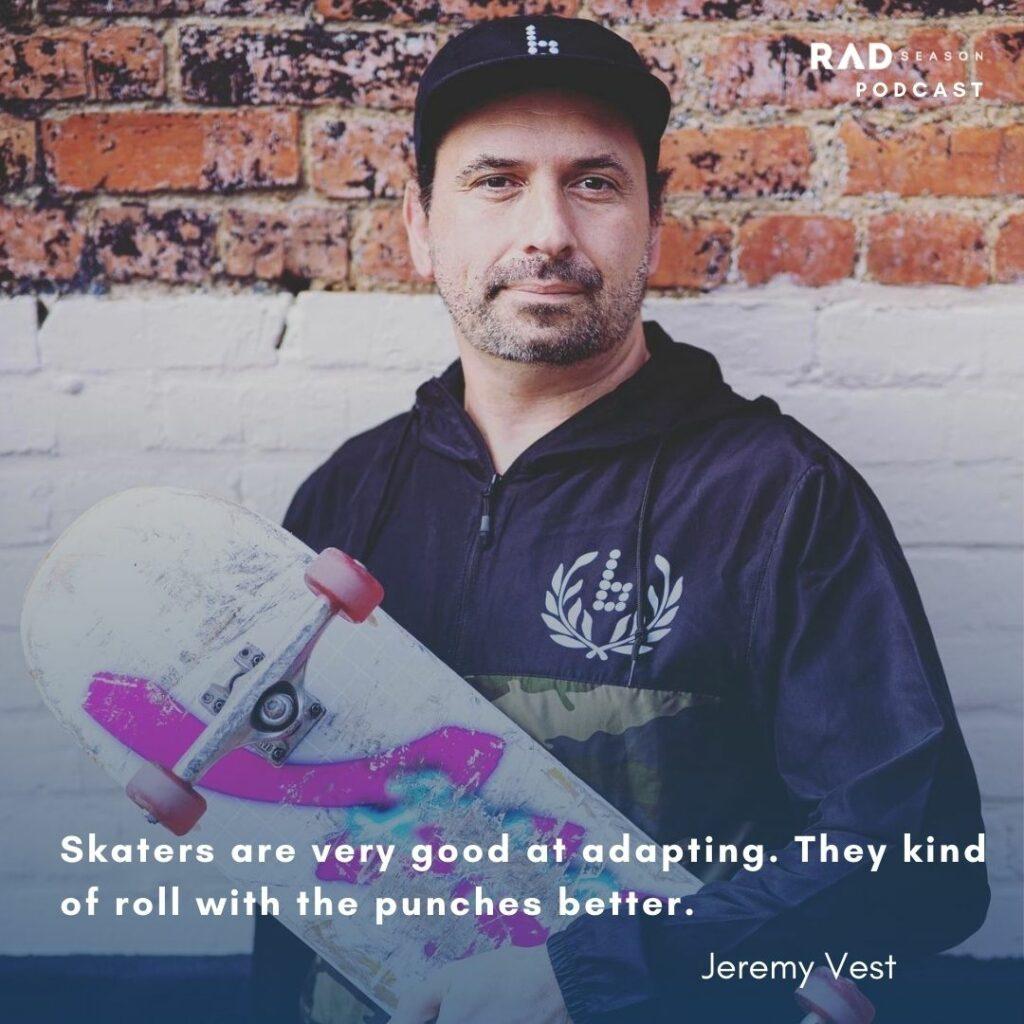 Oli Russell-Cowan: Do you think thats the trial and fail mentality especially in skating?

Jeremy Vest: You just keep on getting back up. I think why skateboarders make such good YouTubers and TikTokers  in a lot of ways  is because they just fail and get back up. They just won’t quit, it’s the tenaciousness of what they do. 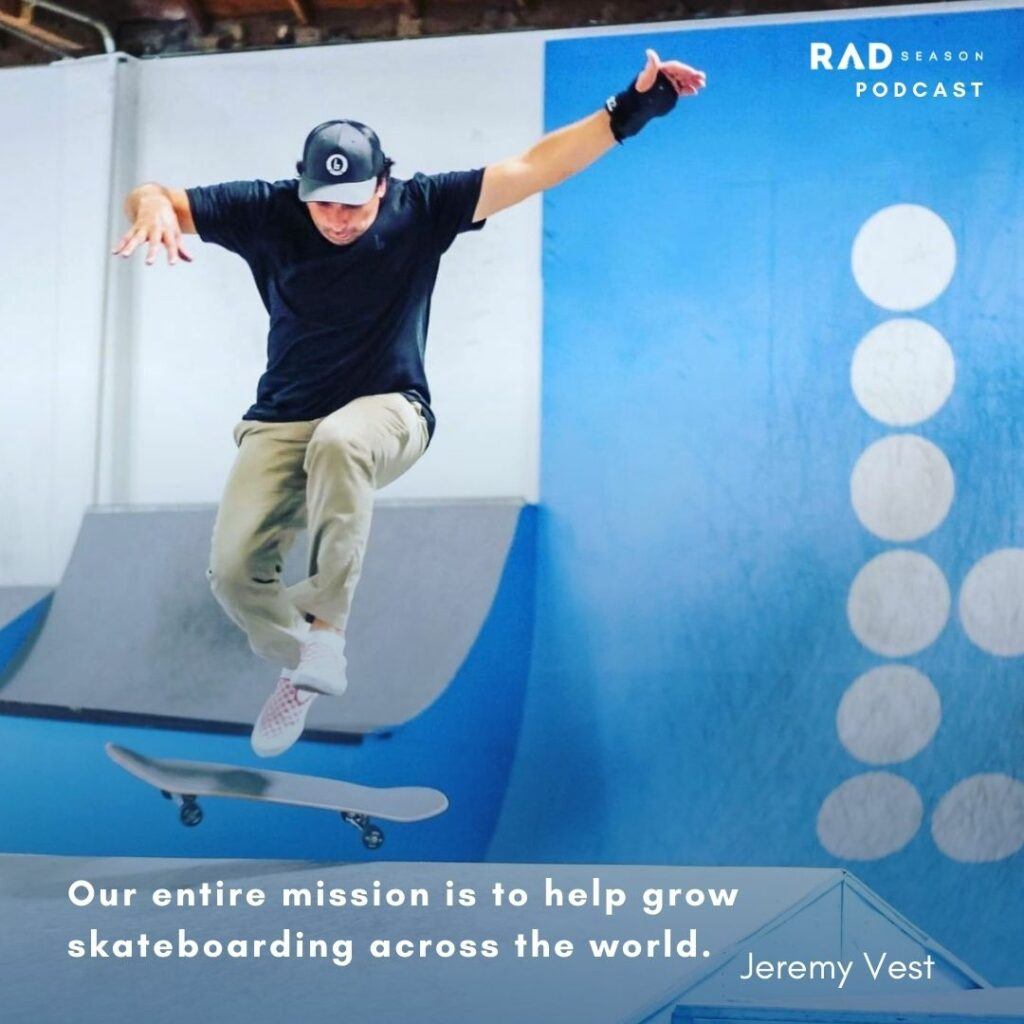 Oli Russell-Cowan: When did you start skating again and combine your passion for skateboarding with a new job working at Braille?

Jeremy Vest: I started skating again about seven years ago. I’ve been pretty big in the YouTube scene. I speak all over the world at VidCon and all these events.

I was a huge actual fan of Braille. I had went to the other two biggest skate companies in the world and pitched myself and introduced them. I had decided about three years ago that I was going to work in skateboarding. One thing I realised is there’s not any money in skateboarding.

A lot of these companies are kind of dinosaurs man. They’ve been pressing the same boards for 40 years, and have the same business model for 40 years. So I quickly started seeing a lot of cracks in the financial sides of skateboarding. I’m just going to be real with you.  I have a family. I have two daughters and a wife like, I ain’t trying to get into a broke industry.

So about three years ago, I was speaking at VidCon and Aaron Kyro and the current CEO Devin, they came up to me and they’re like, ‘hey a lot of people told us to meet you.’

We really hit it off. Being a skater and knowing YouTube as well. I was actually the chief evangelist of the largest third party, YouTube software company in the world at the time. So I was very big into the YouTube side of the world, when they met me. So I started doing some free consulting for them, just giving them some ideas and tips. And those things did very well.

So then I decided to kind of get out of the corporate world.

Rad Season is providing you with rentals and hotels at the lowest prices available online. Book your stay near Signal Mountain, Tennessee, United States using the map below!