Iron Man – tackling via ferrata in the Dolomites, Italy

Taking On Via Ferrata In Italy

Alf Alderson takes on the sheer rock faces of via ferrata in the Dolomites – by ladder.

The word ‘vertigo’ apparently originated in the Dolomites…interesting that, since the titanic peaks and crags of these beautiful mountains, and the trails that snake their way up them – known as via ferrata – are definitely not the place for anyone suffering from this ailment.

But if you have a head for heights and you like spectacular, unforgettable views then you’d be hard pressed to find more dramatic mountain walking and scrambling anywhere on the planet.

Via ferrata translates as ‘iron way’, and refers to the network of iron ladders and steel hawsers that criss-cross the crags and mountains of the Dolomites in Italy allowing mere walkers to access the kind of terrain normally reserved for experienced rock climbers and mountaineers. You simply clamber up the ladders – or sometimes metal rungs bolted into the rock face – and clip into the hawsers which run alongside with a carabiner – so if you should fall it will be a short and relatively painless experience as opposed to a thousand metre death plunge…

“If you’ve seen the movie Cliffhanger you’ll get some idea of the kind of terrain via ferrate help you access since all the rock climbing sequences were shot in the Dolomites, above Cortina”

(and I have it on good authority that action man Sylvester Stallone actually did very few of the climbing sequences for real since he suffered from – yes, you guessed it, vertigo).

Unlike Sly you need to have a head for heights, along with a sense of adventure, to make the most of these spectacular mountain trails, but each route is graded (from ‘A’, easiest to ‘G’, hardest) so you can avoid taking on more than you can handle.

A grade ‘A’ route can be handled with ease by any fit and adventurous 11-year-old; a grade ‘G’, however, is a pretty serious challenge which may involve many hours at altitude on vertical cliff faces, and these are the territory of very experienced hill walkers and scramblers.

The origin of Via Ferrata

The original via ferrata were not all created for the amusement of tourists however. The first one to be constructed was the Possnecker Path on the Sella Massif above the town of Corvara, which dates back to the early 1900s, but many of those that followed were built between 1915-17 when Italian and Austrian troops fought each other in the Dolomites and built the via ferrate to assist with movements of troops and equipment (see box).

The best introduction to via ferrate is to start easy and work your way up. Begin with something like the grade ‘A’ trail to the summit of 2625-metre Sasshonger Peak, a grand and apparently insurmountable limestone bastion which looms over the pretty mountain town of Corvara and turns out to have a virtually hands-in-pockets route to the top, from where you’ll enjoy absolutely sensational mountain panoramas.

Then you could move onto something which involves a decent amount of ‘technical’ climbing, such as the grade ‘D’ Via Ferrata Brigata Tridentina on the Sella Massif, an exciting 440-metre climb which involves long, almost vertical sections of iron rungs and even a spectacular suspension bridge across a yawning chasm near the top. It’s a very popular route and can get pretty busy, but the climbing and the scenery are so spectacular and exposed that you soon forget about anyone else who may be in the vicinity. 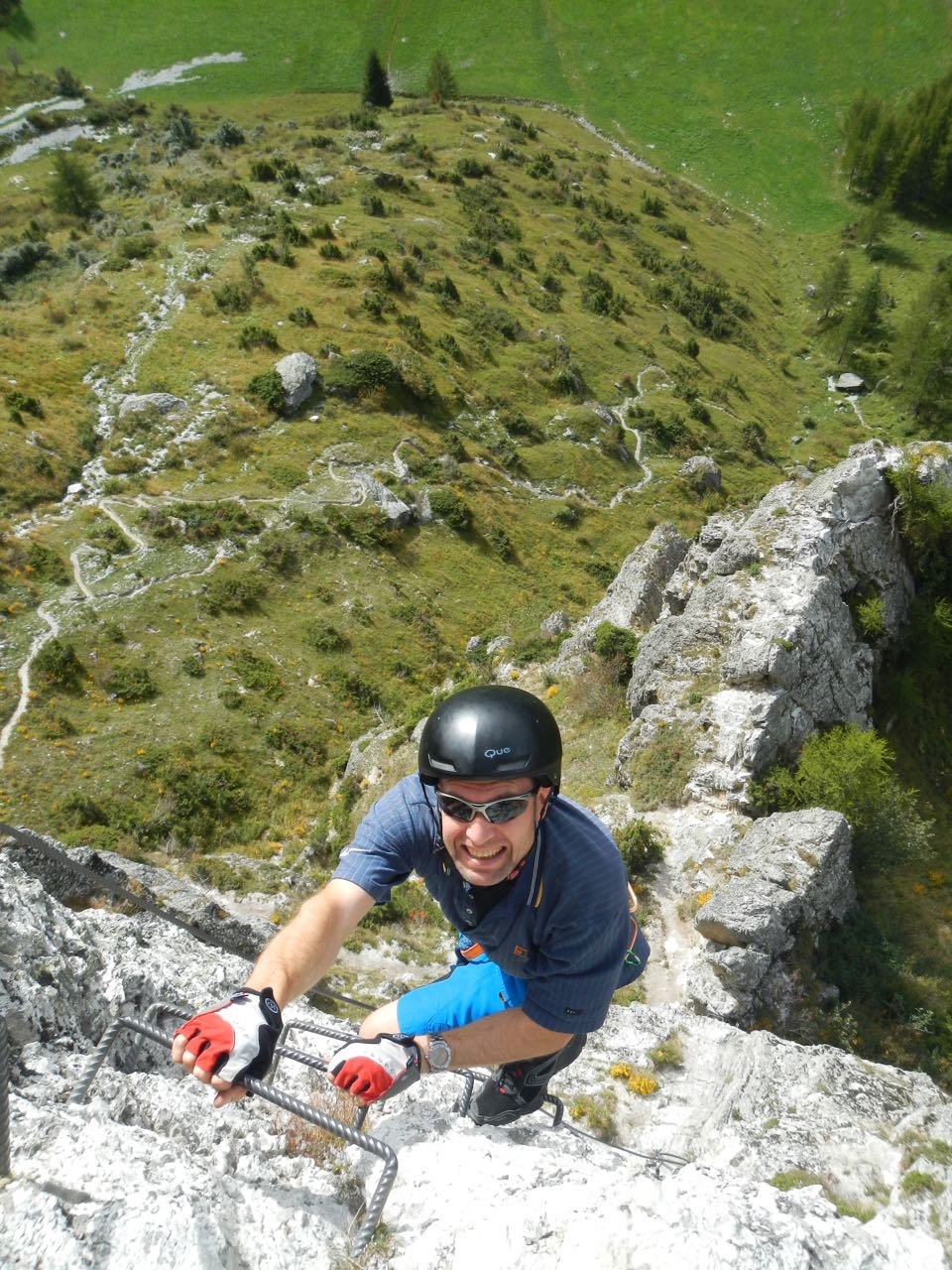 Equipment for Via Ferrata

You’ll need all the gear you’d take for a day out on the British hills, plus a purpose made via ferrata climbing harness and a climbing helmet, which should be provided on any guided climb. If you want to buy one yourself expect to pay around €100.

More info on the Dolomites is available on Dolomiti.org 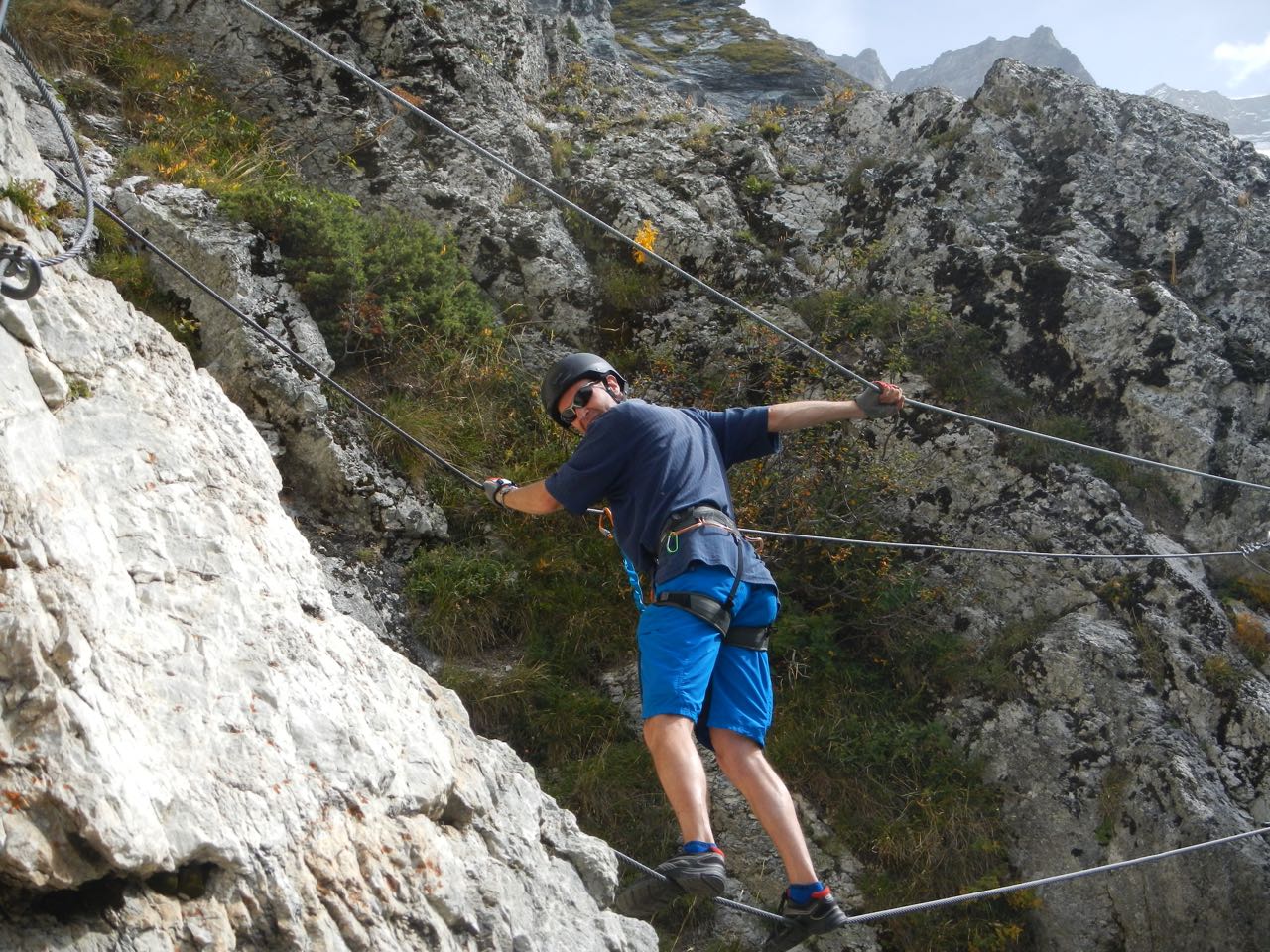 Underground history of the Dolomites

Italy and the Austro-Hugarian Empire were at war in the Dolomites between 1915-17, with Italy’s eventual victory leading to much of what was once Austrian territory becoming Italian – hence the use of German and Italian languages in the region, along with a local tongue, Ladino.

Tunnels, trenches, embrasures and forts were constructed at strategic locations in the mountains and linked by via ferrata, some of which can still be walked today in order to see open air ‘museums’ of restored defences.

Tactics used by troops on both sides included tunnelling into and under mountainsides to attack the enemy (in March 1916 Italian troops tunnelled beneath a peak above the Col de Lana near Arabba and blew the entire top off along with a brigade of Austrian troops) and firing shells into mountainsides above enemy locations to bring down rockfalls and avalanches – thousands of troops were killed in this way.

Austrian troops even constructed an ‘ice city’ beneath the Marmolada Glacier under what is today La Bellunese ski slope. Over 10kms of tunnels were built to depths of up to 50 metres, housing a garrison of 300 men who remained safe here from Italian bullet fire – shells simply ricocheted off the ice above.

Rad Season is providing you with rentals and hotels at the lowest prices available online. Book your stay near Dolomites using the map below!