SantaCon 2018: New York’s Jolliest Fundraising Event Nothing says Christmas more than being surrounded by hundreds of drunk Santas. And the only time you’ll get to see this happen is at SantaCon, a yearly charitable Santa Claus convention unlike any other. The riot takes place on the streets of New York, where for one day […] 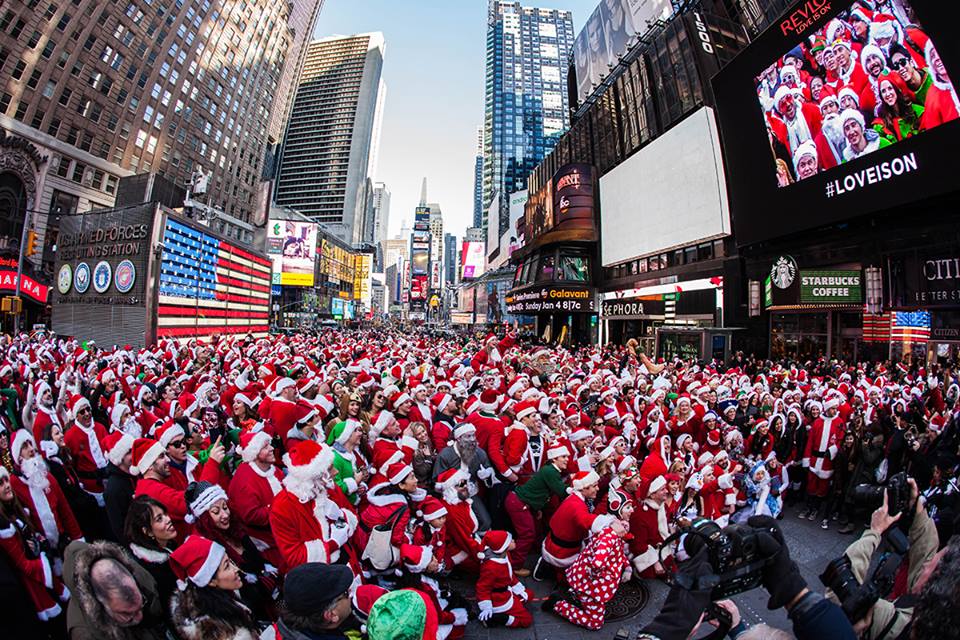 Nothing says Christmas more than being surrounded by hundreds of drunk Santas. And the only time you’ll get to see this happen is at SantaCon, a yearly charitable Santa Claus convention unlike any other.

The riot takes place on the streets of New York, where for one day each year, participants go on a bar crawl while dressed as Santa. You can even come as a reindeer or a gingerbread cookie! But don’t be lame and just wear a Santa hat; this street party is ALL about participation! Some of the city’s best bars join in on the fun in what’s known as one of New York’s most insane events during the holidays. Debauchery is on the menu, as the participating bars will be offering irresistible beer and cocktail specials just for the event.

All for charity, of course: the only way you’ll be able to get into the bars during SantaCon is by donating, which can either be done online or by giving to the elves at the starting point. Santa’s helpers have already been able to raise more than $300,000 since 2012, which benefits local charities such as City Harvest, Toys for Tots, The Ali Forney Center, and The Food Bank to name a few. What started out in 1994 in San Francisco as a way to place the limelight on the crazy consumerist traditions that come with the holidays is now a successful yearly event that New Yorkers and tourists alike look forward to.

‘SantaCon is a bar crawl that puts the fun in fundraiser, spreading jolly cheer one bar at a time for a good cause!’

This Christmas, don’t be a scrooge: donate, come in your best costume, and get ready to have a ball!

Where to view SantaCon 2018

The only way to find out where SantaCon starts is to check out the website and follow them on Twitter by sending a “follow santacon” text to 40404. Because this is a drinking event, Santas below 21 will be allowed to join in but won’t be allowed into the bars.

The fun starts at 10AM on December 8.

SantaCon is a bar crawl, so most of the selected venues will be within walking distance from one another. If you’ll be going to a destination that isn’t within walking distance, your next best bet is to take the Metropolitan Transportation Authority (MTA) rail and bus systems. There’s also the New York subways, buses, taxis, bicycles, and the Roosevelt Island Tram.

Where to stay for SantaCon in NYC

Stay close to the SantaCon action by booking accommodations within the inner boroughs of New York, particularly Manhattan. From luxurious apartment rentals to midrange hotels, there’s a wide selection of lodging options in New York.

Head to the map below for the best hotel deals and Airbnb’s in New York.

Things to do in New York

The Empire State is one of the world’s most beautiful cities, and it’s filled with a ton of fun things to do. Spend some time seeing the city’s most iconic landmarks including the Statue of Liberty, the Brooklyn Bridge, Central Park, the Empire State Building, and the Rockefeller Center, which is especially gorgeous in December with all its decors. Explore New York’s pulsating and diverse nightlife: from dive bars, live jazz, and luxurious nightclubs, there’s something for everyone.

Sample the city’s famous grub, catch a stand-up comedy show, and peruse the many terrific libraries. No matter what it is you’re into, spending some time in New York will help you understand why it’s the greatest city in the world for many people.

8 Of The Best Ethnic Restaurants In New York

Stay safe: Even the best-laid plans can head south. SafetyWing travel medical insurance can help you stay safe and cover you in unlikely situations as well as that epic road trip or on your next adventure. How to stay safe during SantaCon 2018? If you’re not covered for your trip yet, get your quote here.

View all events related to Food and Drink

Rad Season is providing you with rentals and hotels at the lowest prices available online. Book your stay for SantaCon 2018 using the map below!