La Tomatina 2023: World’s biggest food fight draws tens of thousands to Buñol, Spain Buñol, a small town 39km’s west of the city of Valencia plays host to La Tomatina. Considered by many to be the largest food fight festival in the world and also one of the craziest food fights in Europe. Thousands of […]

Buñol, a small town 39km’s west of the city of Valencia plays host to La Tomatina. Considered by many to be the largest food fight festival in the world and also one of the craziest food fights in Europe.

Thousands of people make the pilgrimage to the ancient town of Buñol at the end of August every year to party and pelt each other with tomatoes. Trucks carrying 40 tonnes of tomatoes rock up in the centre of town. Get ready for the undisputed king of food fight festivals.

‘It’s every man and woman for themselves in one incredible food fight that you will remember forever.’ 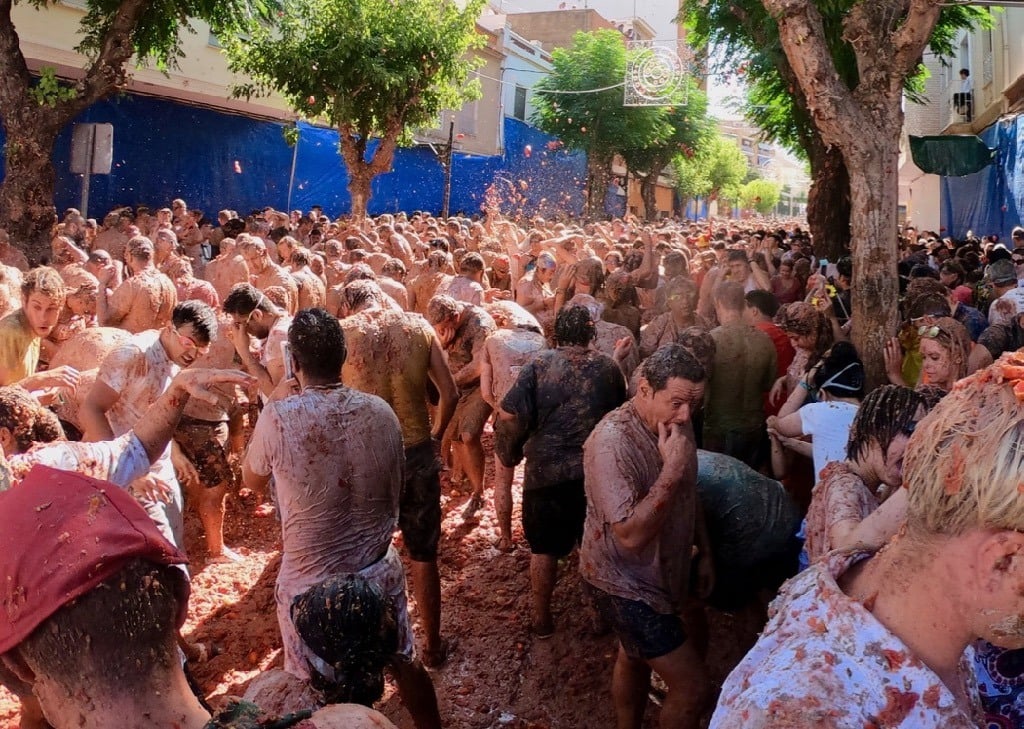 Your experience at La Tomatina

Imagine waking up and preparing for one of the world’s largest food fights on a warm August morning in Spain. After a tostada (tomato on toast) and a strong coffee for breakfast make your way to the Valencian town of Buñol.

The roads are closed off early but there are many people dressed in white walking down the hill to the town square. Street vendors are hyping up everyone with drinks and music blasting everywhere.

Get your ticket and off you go in the mosh pit. Pick up your vegetable ammunition and throw them at everyone and anyone. For one hour trucks keep unloading more and more tomatoes. So don’t worry that you run out, there are 150,000 tomatoes thrown during the tomato fight.

When you come out of the fight look for people offering to hose you down with water for a small fee of 2 Euros. The smell of wet tomatoes lies in the air everywhere and people desperately need a rinse. You may not want to go near pasta with tomato sauce or tostadas for a few days after.

The food fight takes place at Buñol’s town square. Just follow the people down the hill and you’ll get straight to the entrance. Don’t worry about companies selling tickets along the way. Many tourists queue there thinking they can’t get tickets at the bottom of the hill.

There is a ticket booth near the entrance at the square where the organisers sell them. Beware that it is quite a hike to the entrance after the road closures, so make sure you get to Buñol early to avoid being late for the fight. 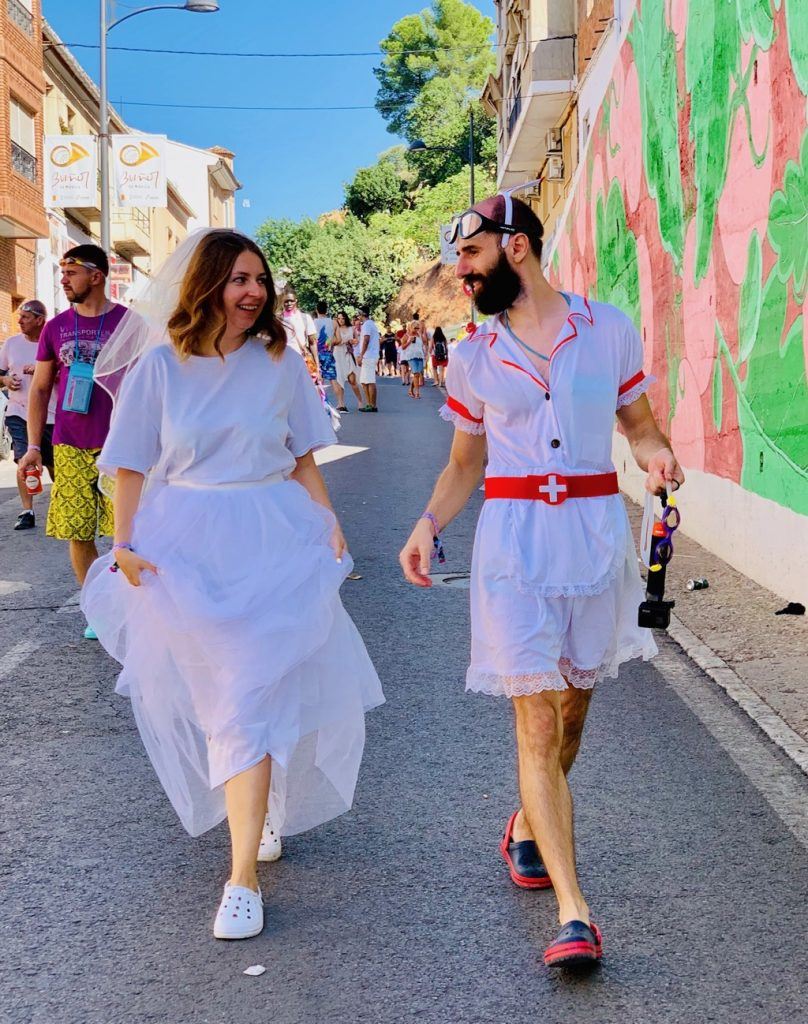 What to wear at Tomatina

Make sure to dress appropriately as the weather in Spain is warm at this time of the year. It may be cold in the morning but will warm up during the day.

Dress in white and wear clothes you are ok to bin afterwards. Otherwise get some bleach to remove the tomato stains afterwards. Also get some goggles to protect your eyes as tomatoes sting.

Wear trainers that you don’t need anymore or Crocs are ideal footwear, something with grip is good. Flip Flops are not recommended as it gets very slippery wading through the tomatoes.

Sneakers or Crocs: Always wear closed and flat shoes to avoid injury as there are thousands of people jumping around in tomatoes.

White clothes: Wear old clothes that you no longer need or want to wear. Everyone is dressed in white.

The event is ticketed as the city is limiting it to 20,000 visitors so the area doesn’t get overcrowded. The price rises from year to year but prepare yourself for approx. 12 Euros per person. 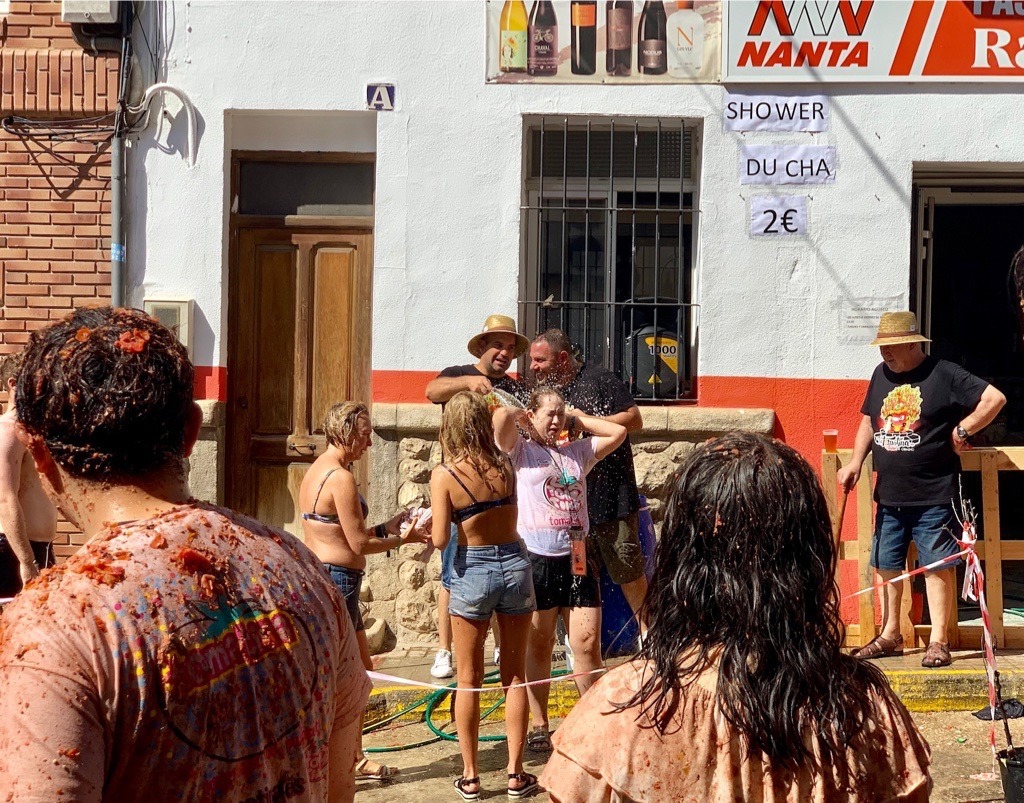 The food fight lasts for one hour and takes place on the last Wednesday in August each year. Tomatina will take place on Wednesday, August 30, 2023. The event is set to be the craziest food fight yet!

Dozens of trucks arrive hauling thousands of over-ripe tomatoes to the city center of Buñol.

The event does not begin until one person climbs a two-story high greased-up wooden pole to reach a giant slab of ham. This process can take a while!

Fighting subsides as tomatoes are scant. Participants head to the Buñol River to wash up and residents also offer hoses to hose down passers-by.

*Fun Fact: All of the smashed tomato pulp on the ground is clean due to the acidity of the tomatoes.

Only tomatoes are allowed: There is no need to bring any tomatoes from home. The town will provide them in truckloads, literally. Tomatoes must be smashed before throwing to prevent injuries. Once the festival time ends, you can’t throw any more tomatoes.

Wear goggles: It makes better photos and protects your eyes. If you forget to bring goggles with you you can purchase them from the street vendors in Buñol.

La Tomatina has been an annual tradition since 1945 in Buñol. There is no strong evidence that shows how or why the event originated, though, possible theories point towards a local food fight among friends, juvenile class war, volley of tomatoes from bystanders at a carnival parade, and the anarchic aftermath of an accidental lorry spillage.

People of Valencia marched in protest when the event was banned in the early fifties. Shortly after, the festivity started to be known to the rest of Spain and La Tomatina Festival became an official festivity.

Regardless of the cause, the tradition became the talk of the town, then talk of the country, and now talk of the world. The festival has now been given the status of ‘a festivity of international tourist interest’. 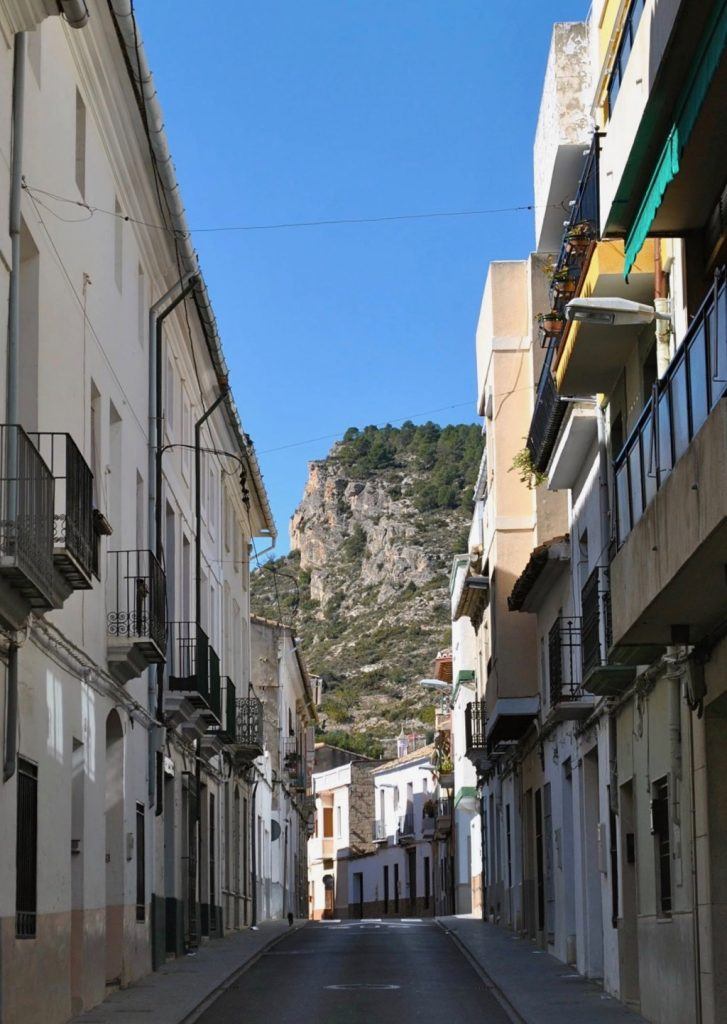 Things to do in Buñol

Buñol does not have much to offer beyond the food fight and a walk along the river. Stay a few more days and explore Valencia. It is Spain’s third biggest city that offers a great combination of city, sun and beach and plenty of cool things to do!

What to eat in Buñol

Paella is probably Spain’s most well-known dish. Everything that goes into it is fresh and sourced locally, from the rice grown around Valencia to even the saffron that flavours the rice.

There are plenty of street vendors and cafes selling paella and other food near the event.

How to get to Buñol

It is easy to get to Buñol by car. It takes just over half an hour to get there from Valencia. Follow the E-901/A-3 all the way until you see signs for Buñol (exit 322). Prepare to park your car and walk to the town square.

Buses to Buñol run very frequently from Valencia Bus station and take just under an hour.

Trains (C3 and RE) to Buñol also run very frequently. They leave from Estacio Del Nord and take just over an hour.

The closest airport to Buñol is Valencia (VLC). From there take the metro (lines 3 and 5) to Valencia’s main station (Estacio Del Nord) and then the bus or train to Buñol.

Where to stay in Buñol

There are a few Airbnb’s in Buñol and the surrounding villages and loads of options 30 minutes drive away in Valencia. You can find everything from hotels to apartments, guest houses and Airbnb’s. Head to the map here for the best accommodation deals during the event.

Buñol is a great walking town and not very big. The roads around the event are closed off so put your walking shoes on.

Las Fallas and the Flour Fight Festival are just some of the other crazy festivals in the region around Valencia.

Stay safe: Even the best-laid plans can head south. SafetyWing travel medical insurance can help you stay safe and cover you in unlikely situations as well as that epic road trip or on your next adventure. How to stay safe during La Tomatina 2023? If you’re not covered for your trip yet, get your quote here.

Rad Season is providing you with rentals and hotels at the lowest prices available online. Book your stay for La Tomatina 2023 using the map below!