Cascamorras 2023: Run Through The Streets Covered in Oil and Paint A messy running festival between two rival Spanish villages, based on an incredible legend is now a whole series of running events that marks the occasion every year. Enjoy a cultural road running race like no other, running in a hot evening race, encompassed […]

Cascamorras 2023: Run Through The Streets Covered in Oil and Paint

A messy running festival between two rival Spanish villages, based on an incredible legend is now a whole series of running events that marks the occasion every year. Enjoy a cultural road running race like no other, running in a hot evening race, encompassed by local villagers.

By the latest estimates, up to 30,000 people take part in the event, running through the streets and covering each other in black olive oil in Baza and colored paste in Guadix, Spain. It’s now been declared an event of great tourism interest, and the villagers are inviting the wanderlust to join in with them.

‘From being painted in black oil to bright colours, being pelted by water and exhilarated by the crowds, there’s nothing that can compare to the cultural immersion of the Cascamorras running event.’ 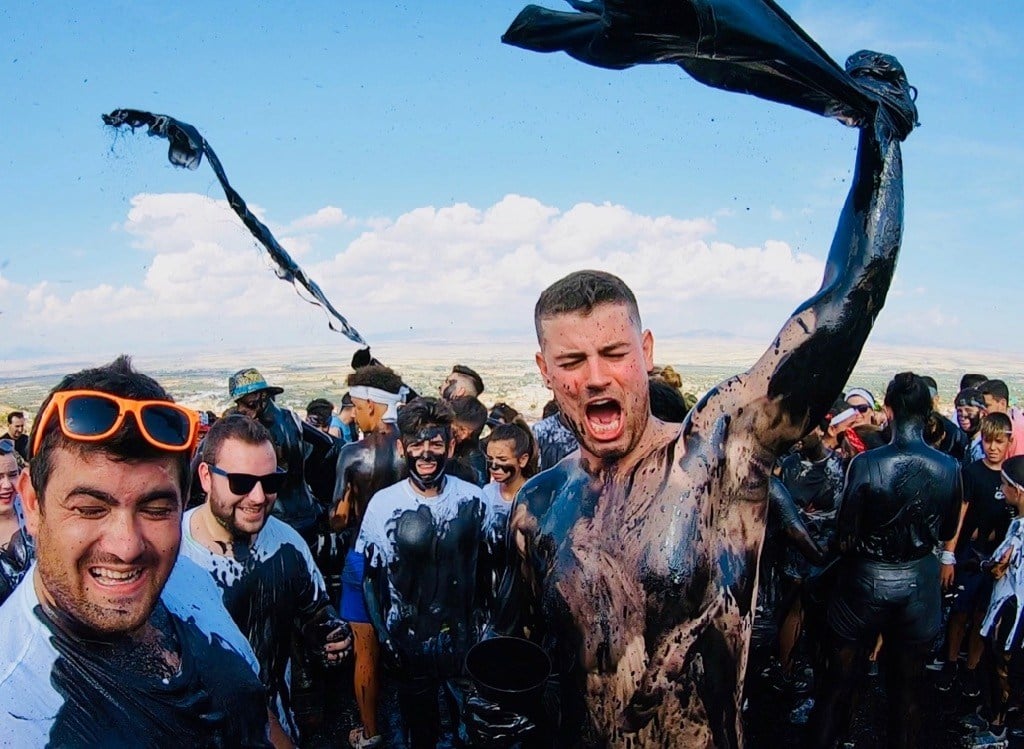 A rocket marks the start of the Cascomorras run. The local fire brigade helps cool the supporters with a water hose. Along the route, the villagers hurl buckets of water from balconies and when they pass through the town hall square they are sprayed with foam. They then move on to the church and the evening run finishes at 9pm. For those who wish to take part, the common attire is a white T-shirt and black shorts, but anything goes and all ages take part. The uphill run is reasonably strenuous, especially if trying to head out the front of the crowd.

To watch the madness unfold a good place is Plaza Constitution near the Town Hall, where you can sit in a café and await the tumultuous arrival. The roads in the area are closed to traffic several hours before, but you can arrive on foot to Plaza Constitution. 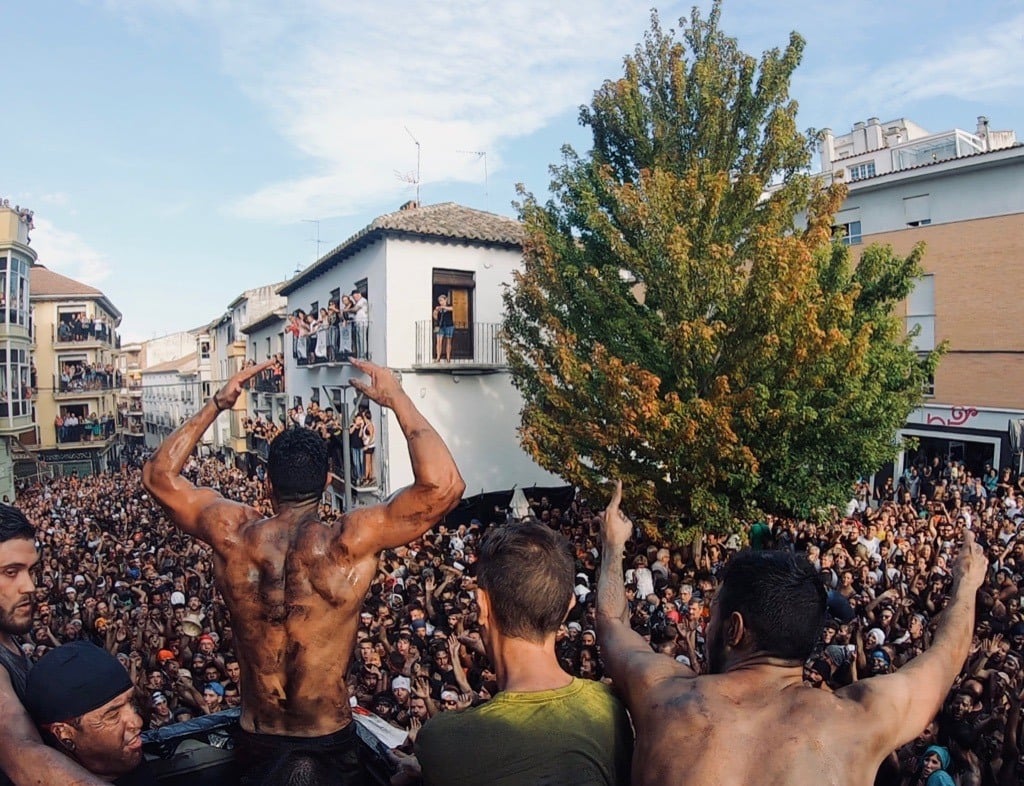 Best views of the Cascamorras Festival

The Altiplano region is one of the unspoiled jewels of Andalusia. Situated in the north of the Granada Province, is the town of Baza, which is the capital. Guadix, the second location is only a short drive away.

This historic city is next to the Baza Mountains Nature Reserve. Baza also has important archaeological and historical sites, such as the remains of the Iberian-Roman city of Basti, the town’s two necropolis and its Moorish baths.

The cathedral town Guadix is on the river Guadix and dates back to Phoenician and Roman times. If you get there early check out the historic center before the madness starts. 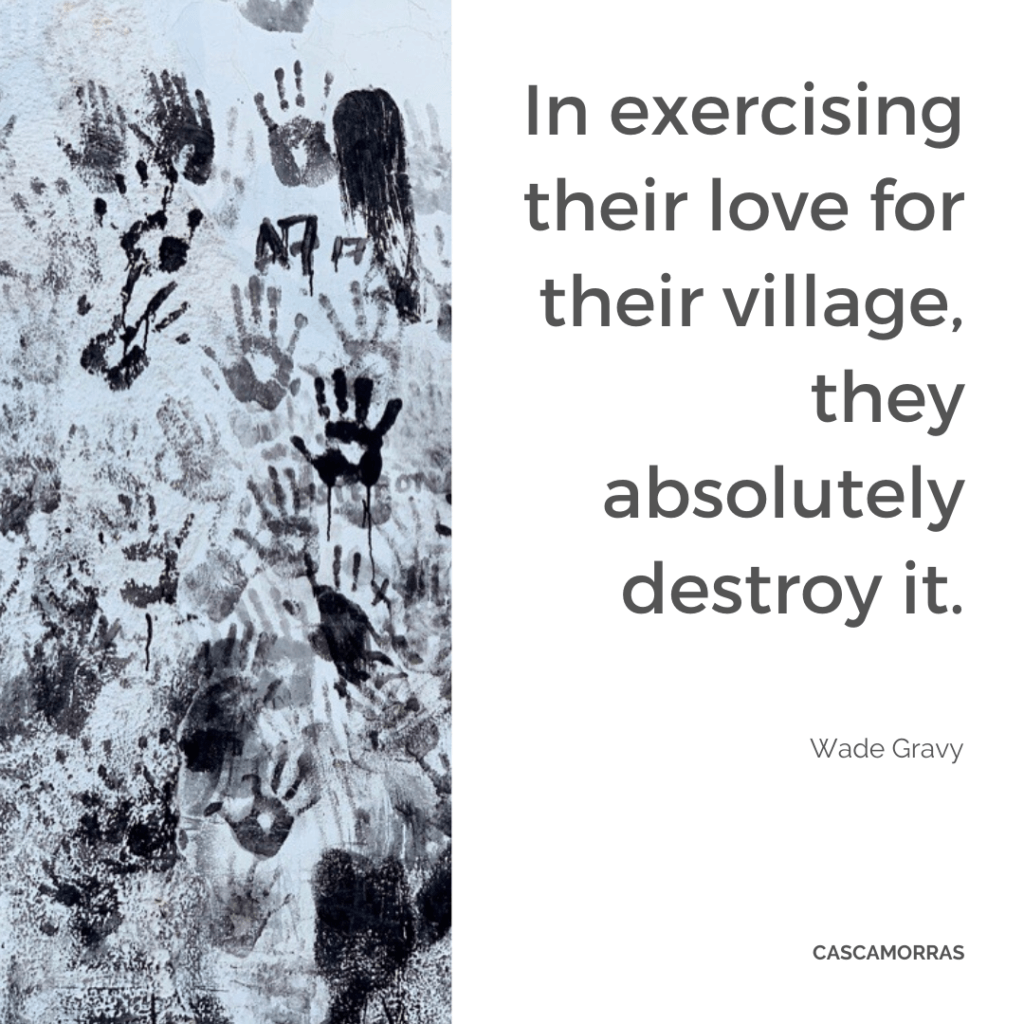 There are a whole series of events to mark this important festival including cultural presentations and even a children’s run. The main highlights for the visitor are the two runs. There are two main running events in the festival, the first one in Baza, on September 6 2023, and the second part in Guadix on September 9, 2023.

The first traditionally takes place in Baza, where ten thousand villagers go up onto a nearby hill to cover themselves with black oil. When the Cascamorras (chosen villager) makes his run down the hill and through the streets of Baza, they are well prepared to ‘dirty’ the Cascamorras (by simply rubbing against him) and the first to do so is honored.

The second race is held in Guadix when thousands of villagers head up to the field near the railway station armed with colored paint in plastic bottles. They proceed to cover themselves in paint, and each other, and any onlooker is likely to be covered as well. 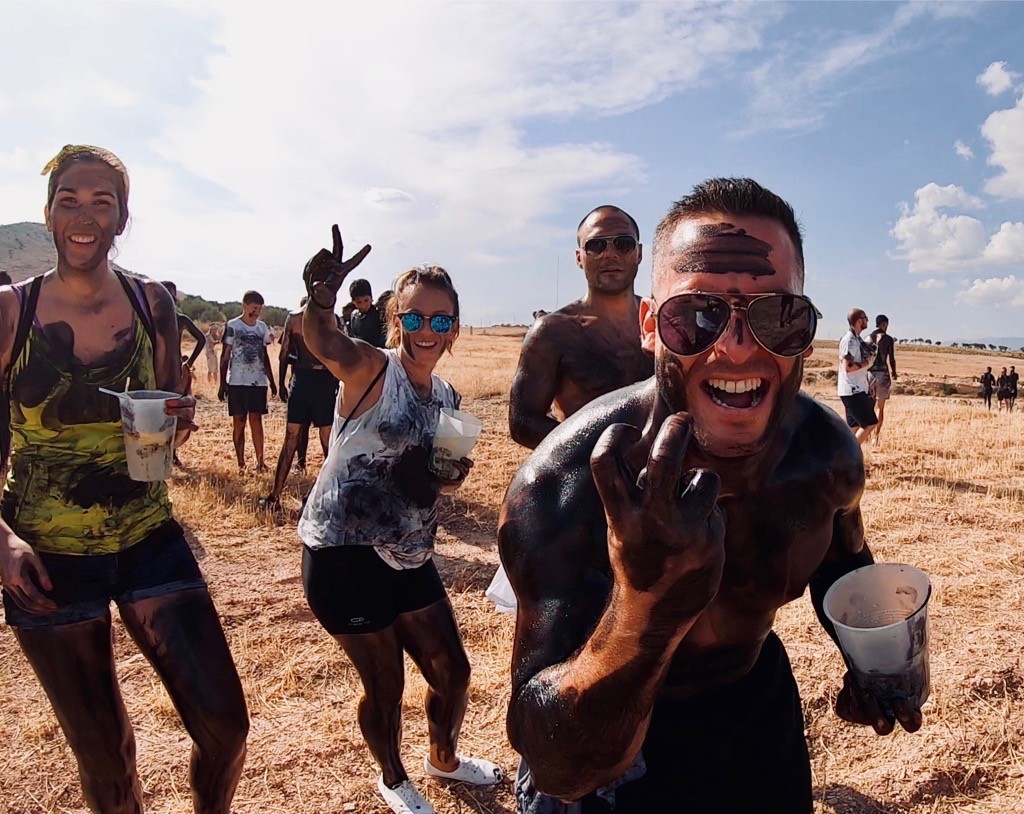 How to get around Andalusia

Bus and coach travel in Andalusia is a comfortable and affordable way to see the beautiful countryside. The closest airports to Baza and Guadix is Costa del Sol and Madrid Airports, with coach and train connections possible to Baza and Guadix.

Guadix is the nearest train station to Baza, at 48 kilometers away. There are various bus companies, offering many travel options to Baza from many main towns. In particular, there are regular bus services between Granada and Baza.

Car and 4WD hire and ridesharing options are available. 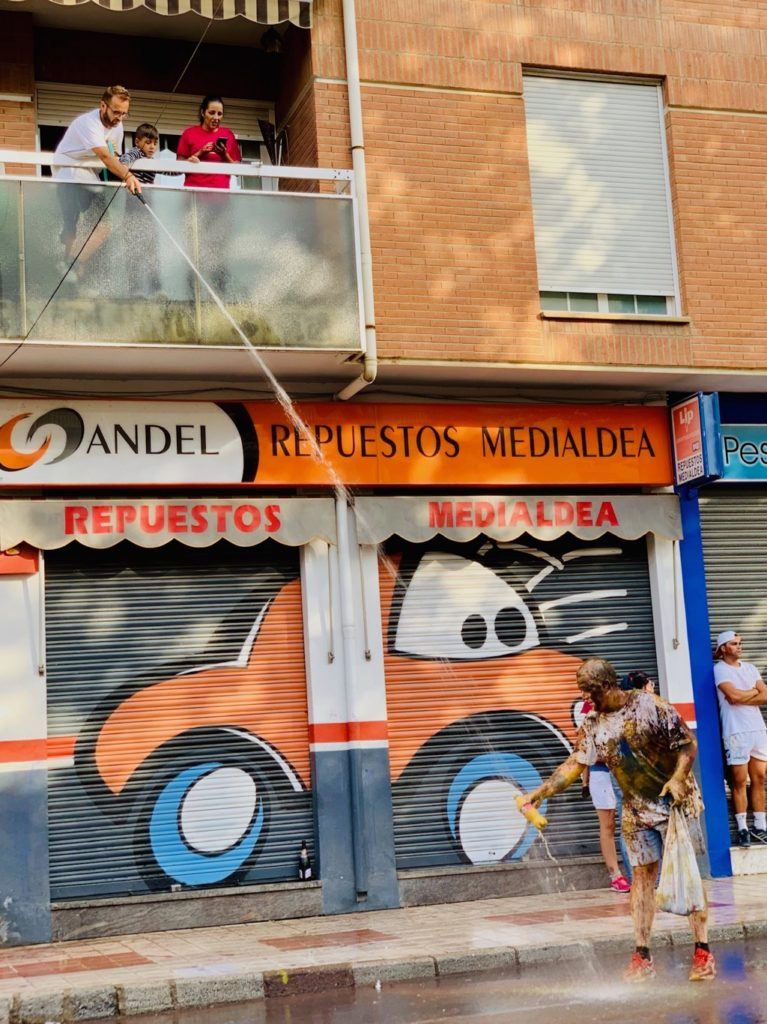 Where to stay for Cascamorras

Hostal Venta Del Sol is situated on the main road lined with shops and eateries, it’s rooms feature free Wi-Fi, flat-screen TVs and minifridges, while some have bathtubs. Some of the apartments have kitchenettes and separate living rooms. Parking is complimentary. There’s also a comfortable restaurant, a bar and a furnished terrace.

Balneario de Zújar is a rural hotel come villa with mountain views. There’s a spa featuring indoor pools with thermal water, as well as amenities that include a café, bar, a library, and an outdoor pool flanked by sun loungers. Rooms come with free Wi-Fi and flat-screen TVs. Upgraded rooms offer scenic views. Suites have sitting areas and balconies, while upgraded suites have in-room whirlpool tubs.

If you want to try something different, stay in a cave. Al Jatib and Cueva El Guindas are both just outside Baza and truly offer a unique experience. People lived in cave houses since the Moorish times. It keeps nice and cool during the summer heat which is needed at this time of year.

There are many hotels, hostels, guesthouses and apartments available in Baza and Guadix. Find the latest deals on the map below. 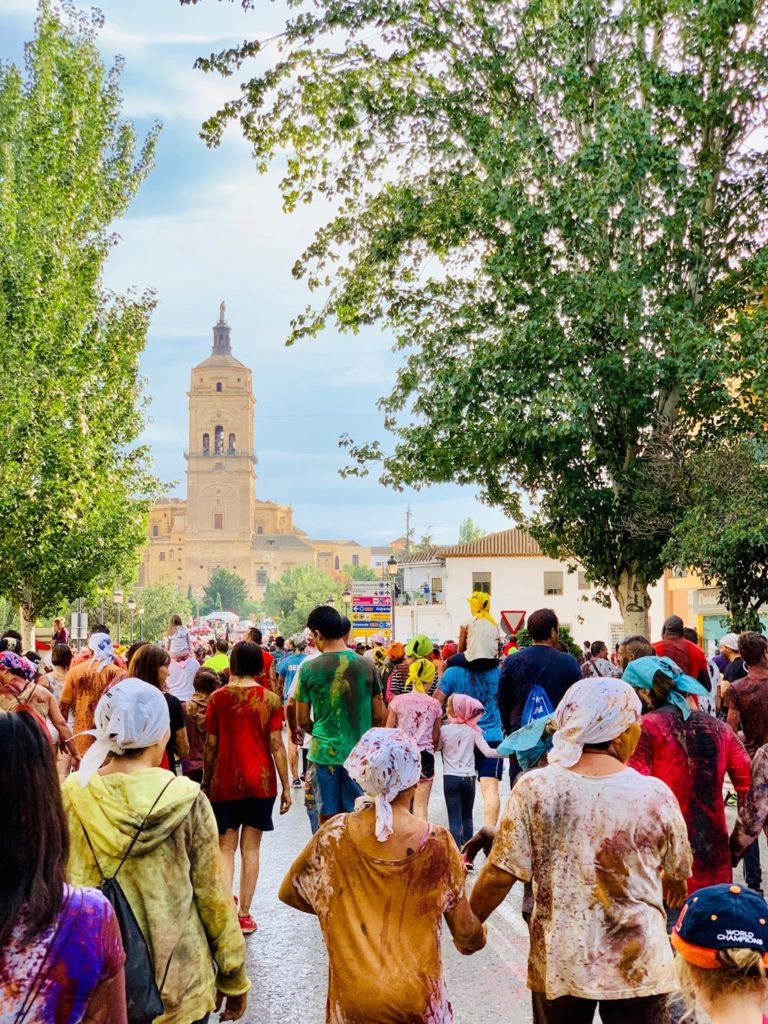 Things to do in Baza and Guadix

El Museo Municipal de Baza is a museum open to the public that has some incredible exhibits of archaeological interest. There are four sections in the museum dedicated to permanent exhibits covering the Iberia, Medieval, Roman and Prehistoric eras.

When in Guadix, have a look at the Gothic cathedral and explore the cave houses nearby.

La Tomatina and the Haro Wine Fight are some of the other crazy Spanish Festivals.

Stay safe: Even the best-laid plans can head south. SafetyWing travel medical insurance can help you stay safe and cover you in unlikely situations as well as that epic road trip or on your next adventure. How to stay safe during Cascamorras Festival 2023? If you’re not covered for your trip yet, get your quote here.

Rad Season is providing you with rentals and hotels at the lowest prices available online. Book your stay for Cascamorras Festival 2023 using the map below!