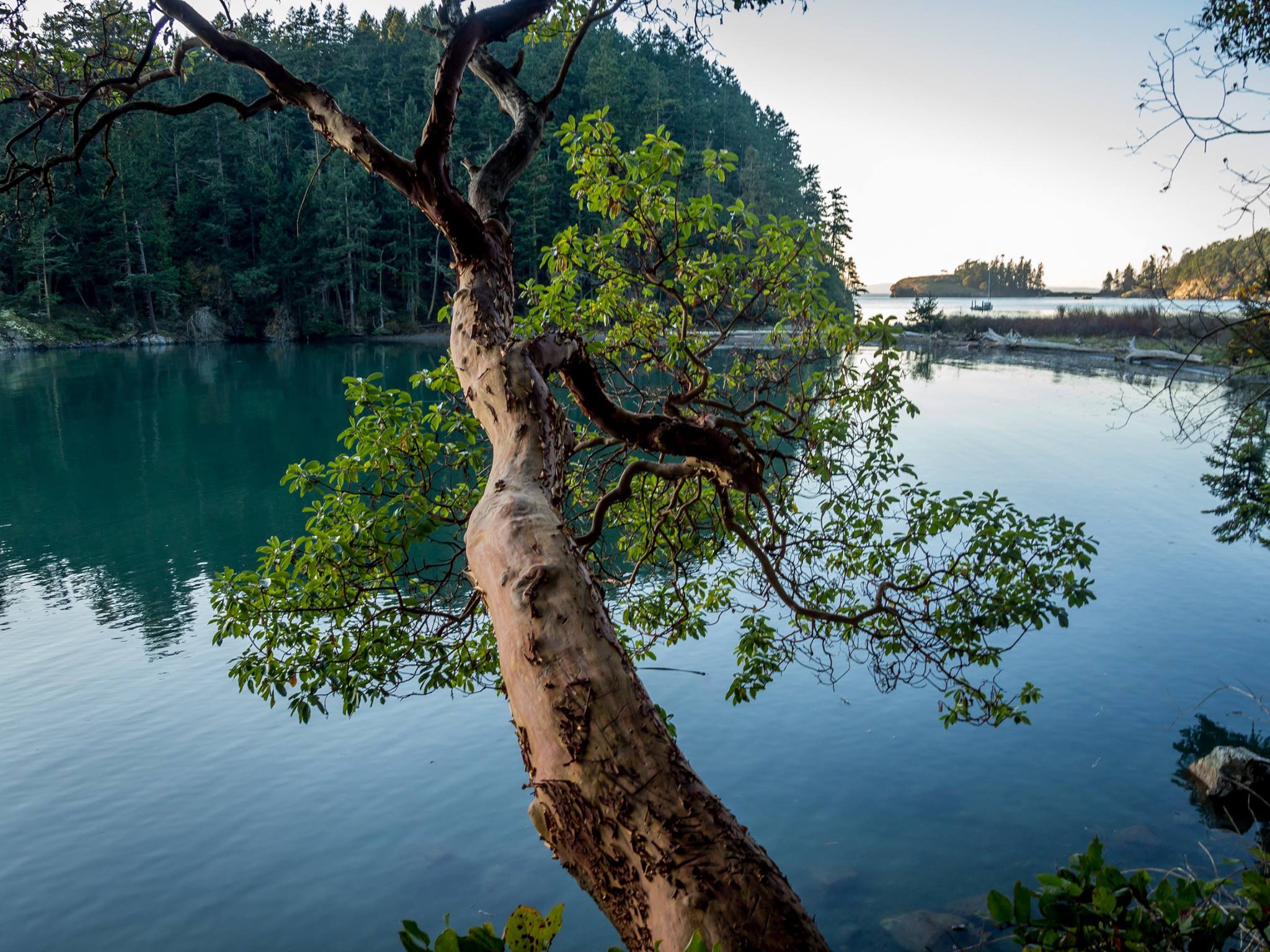 Deception Pass State Park: A Guide to Camping and Kayaking

Last Fall I had the opportunity to visit some old stomping grounds at Deception Pass State Park with the family. It had been almost 10 years since we last drove down from Vancouver British Columbia. What would we see this time around?

Located about 2 hours from Vancouver, Canada and an hour and a half from Seattle, Deception Pass is the island connected to the mainland by the majestic Deception Pass Bridge.

To get there from Seattle you can drive to Mukilteo and grab a ferry that takes you to Whidbey Island (which is connected to Deception Pass). Or you can drive all the way up the Number 5 to take a left to Avon cut off where you take a left onto highway 20 where a quaint little restaurant called Country Corner greets you.

If you are coming from Vancouver like we were, you take the 99 down to the Peach Arch Border Crossing. From there you take the 5 all the way down until you get to Burlington.

Once in Burlington take a right onto the Avon Cutoff and follow the above directions where you take a left at Highway 20 where the Country Corner restaurant is. 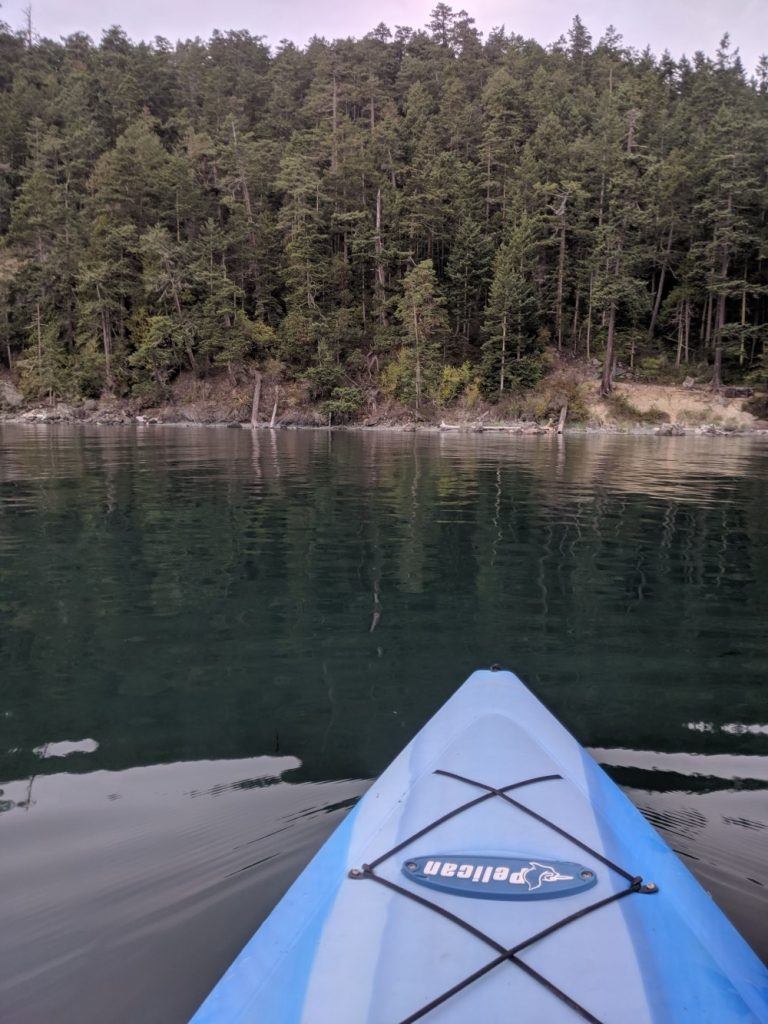 Upon arrival, we checked in and set up the tent trailer at Deception Pass State Park. At the campground, a few curious chipmunks greeted us.

We didn’t think very much of them and just thought them to be cute little critters that wanted peanuts. Little did we know they would turn out to become thieves.

On the first day, we wanted to go kayaking but noticed that the wind along West Point was very gusty and strong. Probably not the best conditions for recreational kayaks so we decided to visit the small town of La Conner instead. La Conner is a small town alongside the harbor where delicious ice cream and quant views come to greet you. 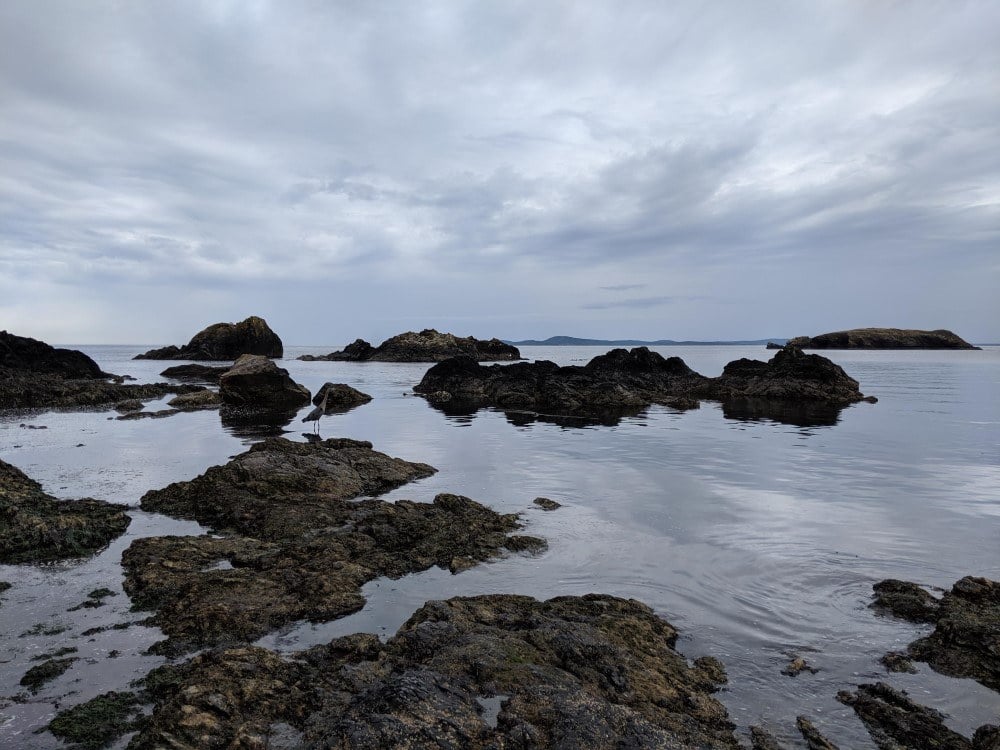 Day 2 came around and we decided to paddle Cranberry Lake located next to the Deception State Park campgrounds. Because the lake is isolated from the ocean I decided to give my inflatable stand up paddleboard a go.

It’s a nice calming paddle where you drift along with lily pads, herons and geese and a huge folk of seagulls that congregated to the middle of the lake for some reason. A few times throughout the paddle I decided to Savansa on the board and just relax. That’s what I love about paddle boards is the fact that you can paddle in all sorts of different positions without a care in the world!

We returned to the campground to eat and our little chipmunk friends came and visited us. We fed them a few peanuts which they joyfully accepted, but were apprehensive about getting too close to us. After enjoying a nice late-night fire with some toons we headed to bed.

During the night I heard all kinds of scurrying and noises within the tent trailer. This is something that is slightly unnerving, especially to suburban folk like us who just have to worry about the noise of cars. The scurrying continued for a bit until it went quiet.

The next morning we woke up to find peanut shells scattered around the edges of the tent trailer. Those little bugger chipmunks broke into our residence and decided to make themselves at home with the peanuts bag. This was a friendly reminder not to feed the local wildlife. 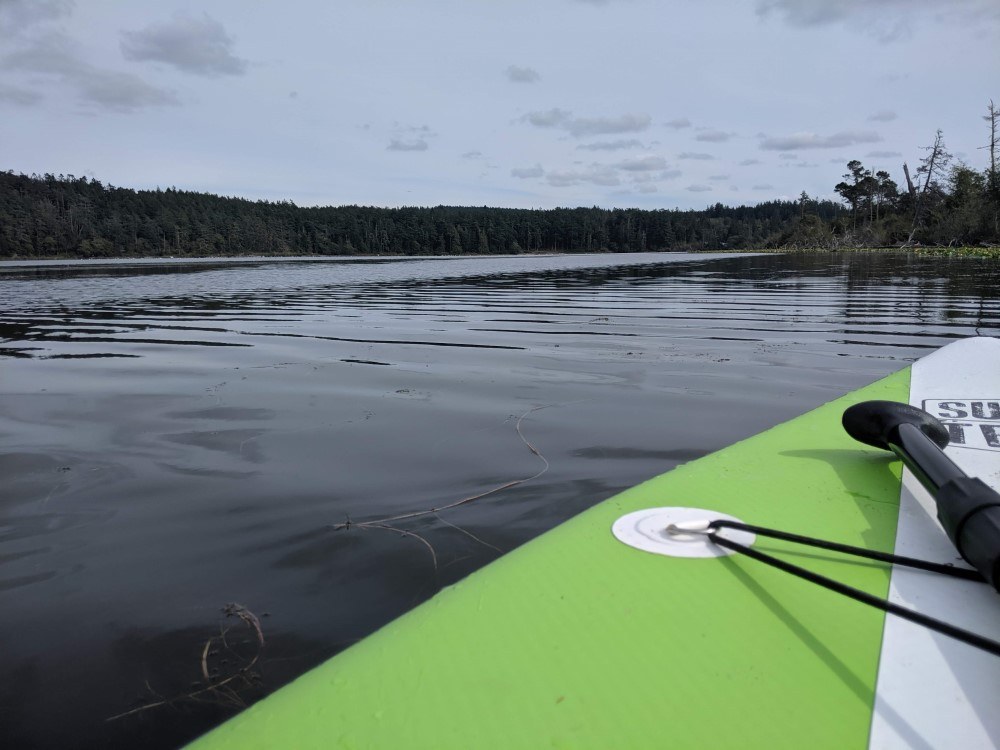 After our Chipmunk realization, we decided to head to Bowman Bay to go for a hike to hike the Rosario head. It was here where we found all kinds of wildlife. We sat and watched baby seals perk their head through the shallows of the tidal pools as well as a very patient heron concentrating on fish that were around his legs.

As we hiked back to Bowman Bay Boat launch we noticed a family of river otters bathing on the beach, rolling themselves around on the sand.

After seeing all this wildlife we decided to get a closer look. We headed back to the campground and grabbed our kayaks! It was there where we must have encountered at least 7 or 8 different seals at different times swimming cautiously by our kayaks checking us out.

We also managed to see that same otter family go back to the water to maybe find some late-day morsels. 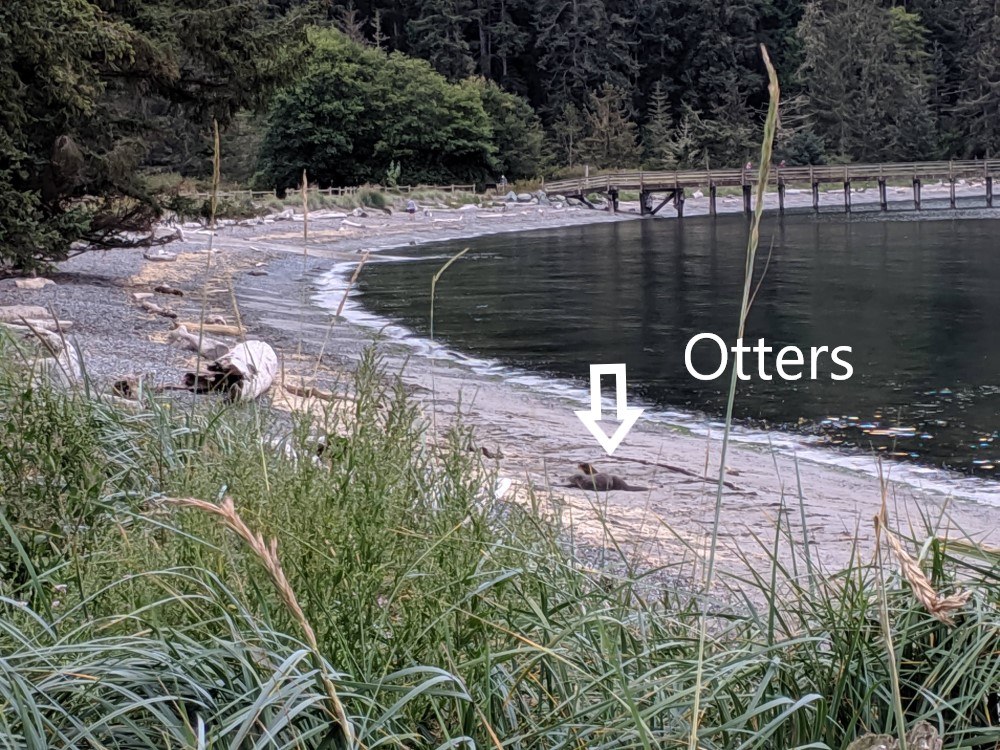 On our kayak trip, we paddled from the boat launch at Bowman Bay to Sharpe Cove. There we saw a few of the seals curiously checking out the kayaks and then amid a panic plop their heads below the water to check us out at a safer distance.

From Sharpe Cove, we paddled around the Rosario head jetty back to the tidal pools we visited on land. We noticed a tiny island facing Rosario beach and we decided to paddle around it and check it out.

We later found out this was North West Island. Off the island, there were various different gulls and waterfowl hanging around the kelp that surrounded it. We even noticed a heron standing on one of the strands. We ended up paddling back to the boat launch where again curious seals greeted us and floated around our kayaks.

On the last day, we decided to explore Anacortes. We discovered a delicious pizza joint called the Pizza factory which felt like a fitting reward to a great week at Deception Pass.

The next day was pack up day where we packed up the tent trailer. At the corner of my eye, I could see the little chipmunk that was a prime suspect of the previous night’s break and enter. Goodbye, thief, I muttered.

We stopped by Deception Pass West Point once more to admire the views and then headed home back to Vancouver. 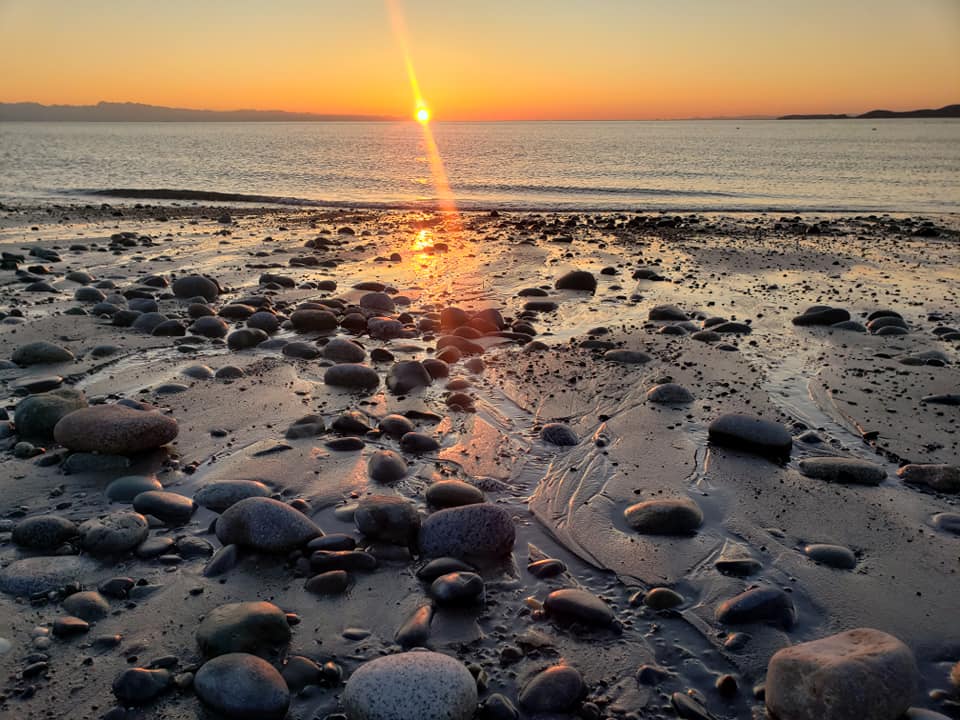 Rad Season is providing you with rentals and hotels at the lowest prices available online. Book your stay near Deception Pass State Park using the map below!

Derek Lenze is a paddling enthusiast that likes to explore the Pacific North West in a kayak, paddleboard or anything that floats in the water. When he is not exploring the wilderness is can be found working on his website Floating Authority.