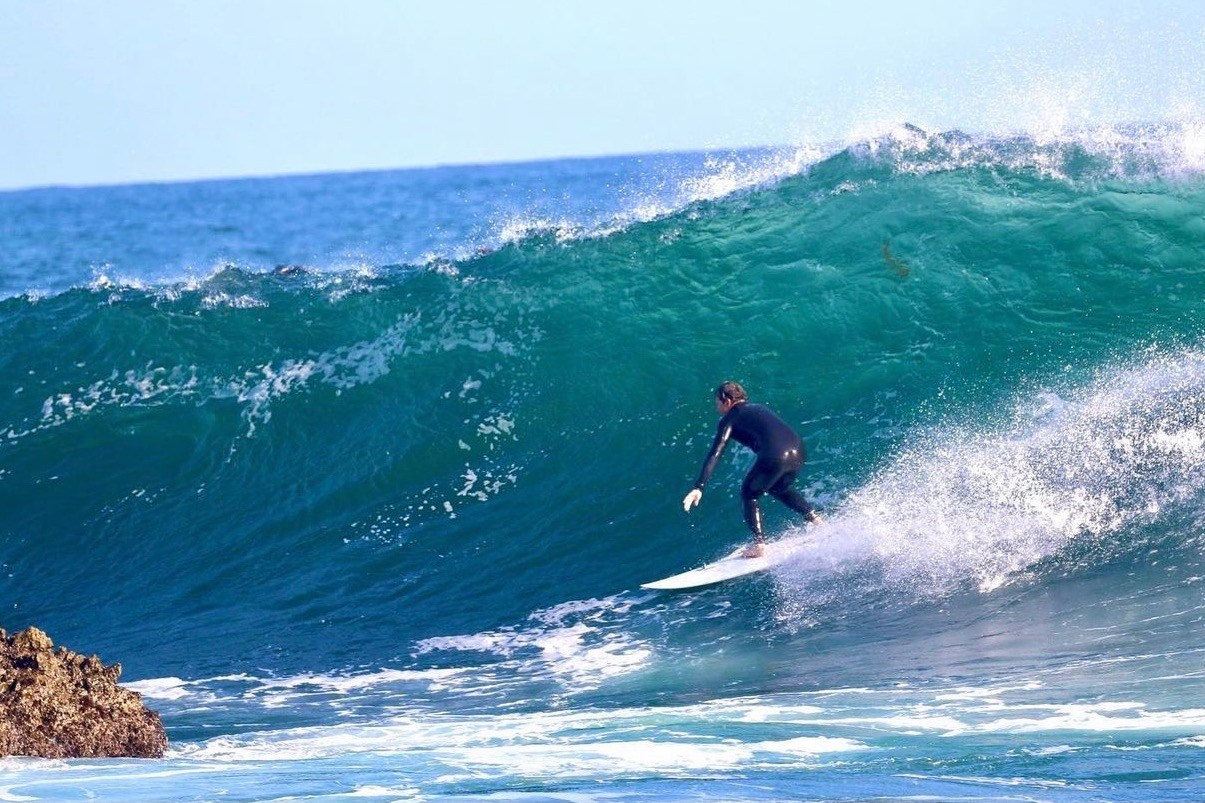 Chad Nelsen is the Chief Executive Officer of The Surfrider Foundation

Chad Nelsen was brought to Laguna Beach, California with his family in the 70’s by his Dad who was an Ocean Science Educator. Chad spent his entire life growing up around the ocean, swimming, diving and surfing. He became a Lifeguard at Laguna and went on to study Geosciences then Coastal Management. He volunteered at the Surfrider Foundation a non-for profit organisation dedicated to the protection of the world’s oceans, waves and beaches. A few years later he landed a job at Surfrider coordinating a beach mapping programme which opened up to him running the Environmental Department for 16 years.

In 2014 Chad became the CEO of the Surfrider Foundation and oversees more than 180 chapters and student clubs around the world. He also helped establish “Surfonomics,” which looks at the economic implications of surf tourism.

Tune in to the podcast to find out how Chad combined his love of surfing with science and conservation, what Surfrider are working on and the future of the organisation.

Oli Russell-Cowan: You grew up in Laguna Beach wasn’t your first job as a lifeguard at the beach there?

Chad Nelsen: It goes back even farther. My dad is an ocean science educator, and a really avid scuba diver. I was actually born in New York but he brought our family to Laguna Beach in 70, before my brother was born. Before then we actually lived on Sipan a small island in the Mariana Islands for two years. He taught high school there. 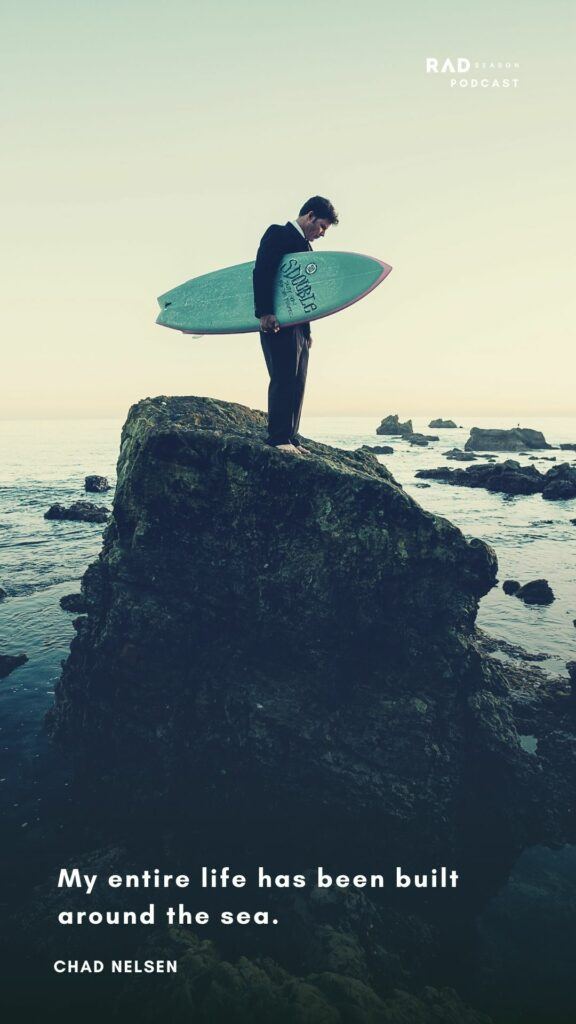 I learned to swim when I was 18 months old. I’ve spent all this time in the ocean. I had a dad who was an ocean science guy.

I was immersed literally and figuratively in the ocean my whole life.

Oli Russell-Cowan: You began at the Surfrider Foundation on a voluntary basis right?

Chad Nelsen: Yes. When I was in that grad programme, I was broke like most grad students. My dad ran an ocean science camp for kids. I came back and I worked for him to make some money. And I volunteered at the Surfrider Foundation for free as an intern for the summer and studied artificial surfing reefs that summer, which I then turned into my master’s project at grad school.

That was my introduction. It was tiny back then. We had five employees in the organisation. The budget was less than a million bucks. I was like this is an amazing organisation. So it took me a few years after that to get lucky and land a job. But that was when I realised this is what I wanted to do.

Oli Russell-Cowan: When you got a job that was in the environmental department, wasn’t it?

Chad Nelsen: I started running a beach mapping programme. About a year and a half after I was there the environmental department was a staff of two, my boss quit. And all of a sudden, I became the environmental director. So I ran the science and policy shop, which was just me. It was pretty small. Now it’s a team of over 30. I was running the science and policy shop at Surfrider and I did that for 15 years.

The Evolution of Surfrider Foundation 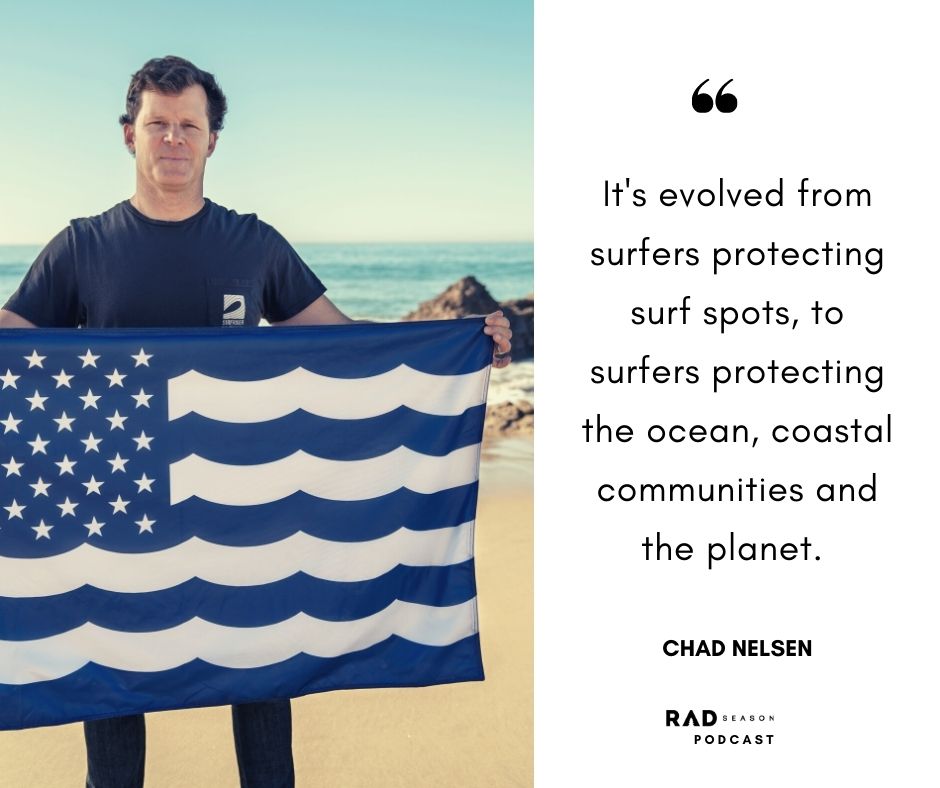 Oli Russell-Cowan: How has Surfrider developed since you first started?

Chad Nelsen: The evolution of the organisation has been really interesting. It was founded in 1984. Before my time I was 14. It was founded by three guys, Lance Carson, pro surfer from Malibu, a guy named Tom Pratte, who’s an environmentalist, and a guy named Glenn Hening, who worked at the Jet Propulsion Lab. He was like a crazy engineer, kind of a mad scientist.

The scope broadened. I think it continues to expand as surfers protecting the ocean to now surfers trying to protect the planet as we face things like climate change. I think Surfrider was probably one of the first surfing environmental groups. And now there’s a global coalition of them. It’s great to see the surfing world getting a lot more active in protecting the ocean, which is essentially the fundamental landscape of our planet.