Bob McKnight is the Co-Founder, Former Chairman and CEO of Quiksilver and one of the Pioneers of the Modern Surfing Industry

Bob McKnight grew up in Pasedena, California and at 9 went down to the beach with a friend who taught him how to surf. He was hooked from that point on. His father gave him a film camera and he started making his own surf films which funded his way through college showing the surf films up and down the coast. Bob majored in business at USC and had gone on some major surf trips. One of them being to Bali where he met pro surfer Jeff Hakman and his future wife. That trip would change Bob’s life forever.

Jeff had met Alan Green in Bells Beach, Australia after he won the contest there. Alan had set up a company called Quiksilver making the first ever shorts for surfers. Jeff and Bob convinced Alan to license Quiksilver for the North American market. They started manufacturing and selling board shorts out of Bob’s VW van up and down the country to surf shops. Bob never got to go to film school.

The surf shops couldn’t get enough of Quiksilver. They were at the beginning of the modern surf industry and they went from being a start up to becoming a multi-million dollar business. Quiksilver were the first surfing company to go public on the New York Stock Exchange and the first to launch a female range, Roxy.

They expanded into skateboarding and snow and by the mid 2000’s Quiksilver was worth 2.5 Billion dollars. Competition increased, recessions came and Quiksilver hit some rocky times. They restructured and formed Boardriders Inc incorporating brands Billabong DC Shoes, RVCA, Element, VonZipper, Kustom. Bob still wears boardshorts and the stoke is alive and well.

Oli Russell-Cowan: Growing up in land how did you get into surfing?

Bob Mcknight: I grew up in Pasadena, which is an hour inland from the coast. I was a tennis player and a Little Leaguer and all that. When I was about nine years old a friend took me to the beach. He was a young surfer and he threw me in the water and pushed me into a wave and actually taught me how to surf.

I was just smitten. Standing on the board and having the board move on the wave, getting out, sand between my toes, sun and salt on my skin. I just loved the whole deal.

Anyway, my father along the way gave me a movie camera. I started making my own homemade Super Eight surf films, and actually paid my way through college with the surf film shown up and down the coast. 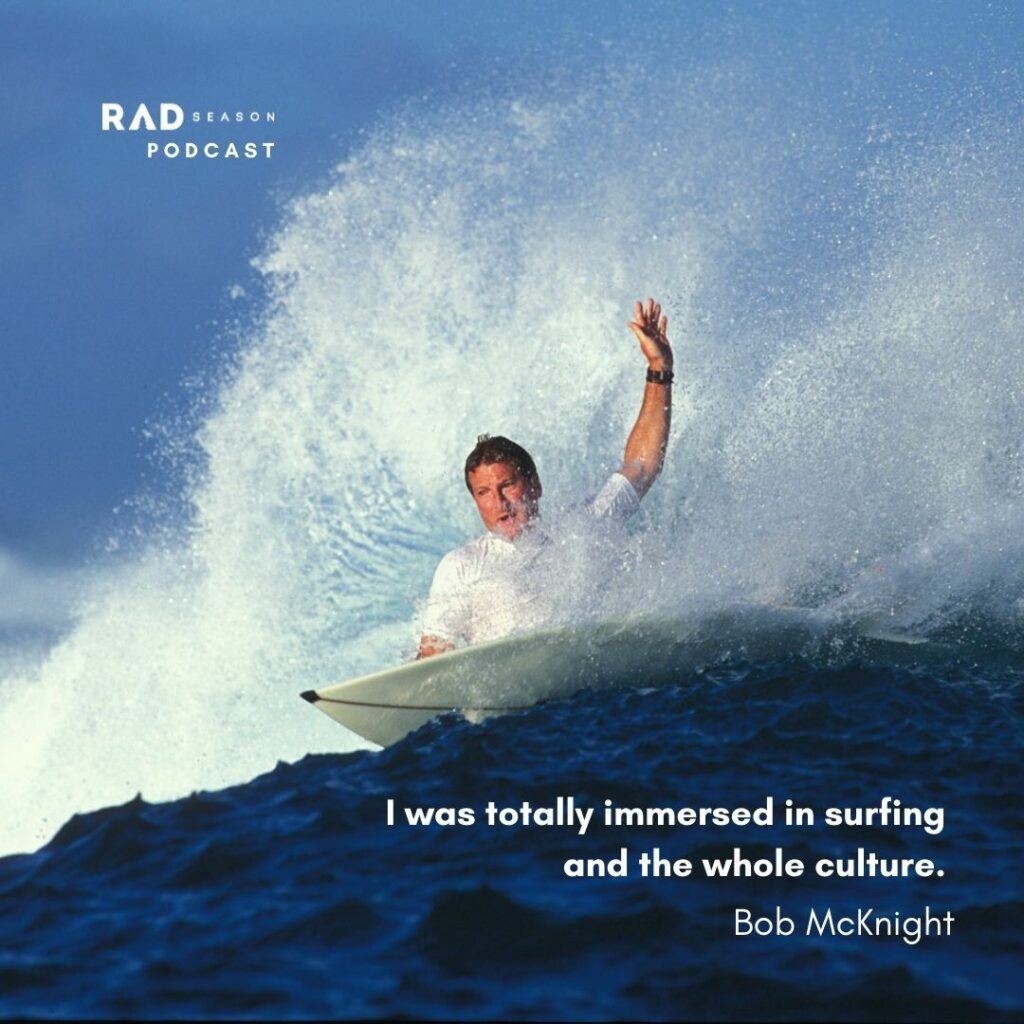 I went to business school at USC, finally, after graduating from San Marino High School. I majored in business and I finished four years. In the meantime, I’d gone on some major surf trips, during the off-season and in the summers.

One of the places I went to was Bali along the way. There I met Jeff Hakman who changed my life. One of my very best friends forever. We got to know each other really well.

Oli Russell-Cowan: This was in the early 70’s, right?

Bob Mcknight: Yeah, 73. I met him down there along with Phil Burns, some other great people that became part of my life and I also met my future bride from New Zealand. That one trip just changed my whole life with my future partner in business, my future partner in life, so it was amazing.

When I got back, I finished school and Jeff started having me come over and house sit for him while he travelled the world going to surf contests. That was an honour hanging out at Jeff Hakman’s house and surfer over there with the boys at Off-the-Wall.

Jeff started talking about these board shorts coming out of Australia called Quiksilver and I didn’t think too much of them they’re just look like any other pair of shorts.

The Beginning of Quiksilver in Australia

He held them up and he had a pair and his pair were like cream and brown. Not too fabulous. He talked about the virtues of this brand and how on fire it was in the real core surf group. What happened is it started in Torquay, Victoria, Australia by a guy called Alan Green.

Every time all the surfers would go to Bells Beach at Easter for the contest. Alan Green would make them a pair of custom pick your colours, pair of board shorts.

So all the guys down there from Mark Richards to Simon Anderson and Bruce Raymond get their pairs of boardshorts made and then they go about wherever they came from. The next thing you know, these shorts are being seen in every cover shot, centres spread, editorial, whatever, because all the guys just wore them because nobody else gave them anything for free. 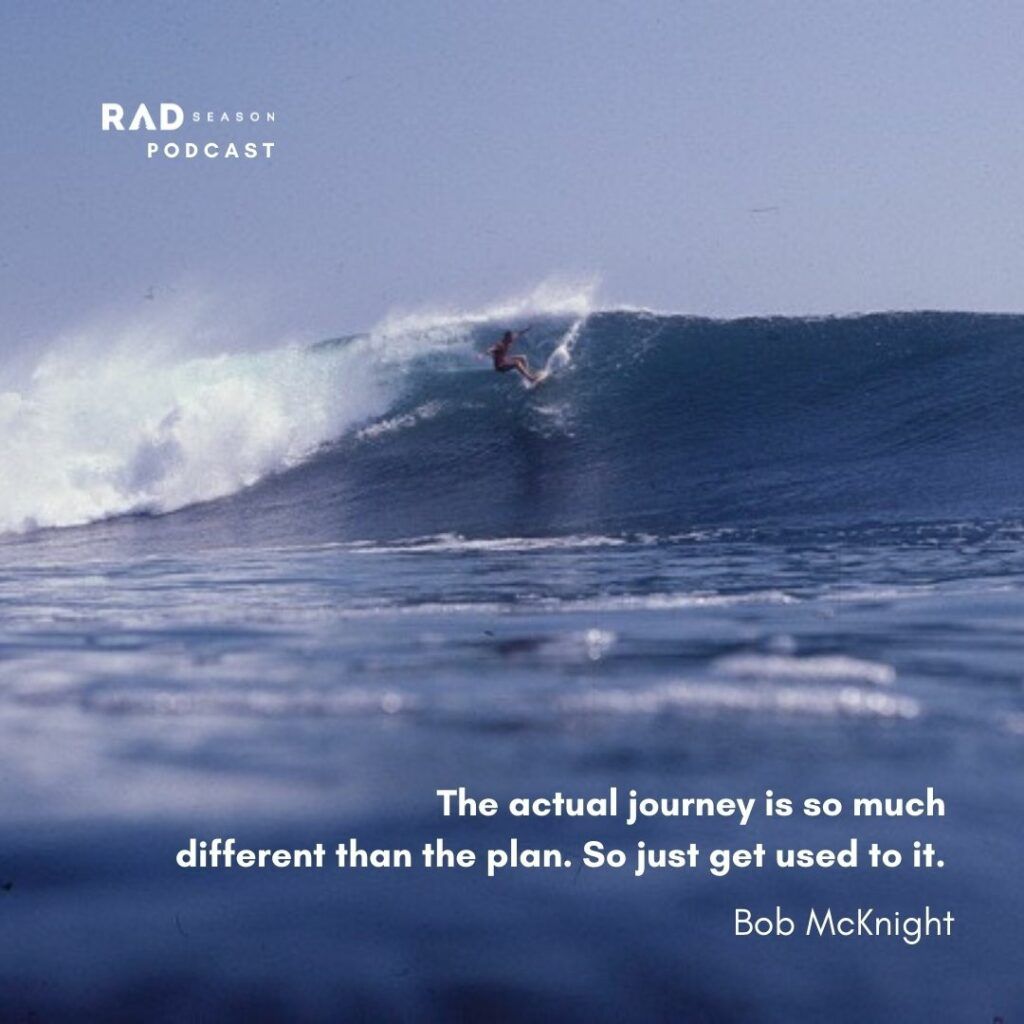 Oli Russell-Cowan: Was it a marketing plan or was Alan just giving them out to friends?

Bob Mcknight: He was doing the modern day influencer thing just giving away boardshorts. The best surfers went to South Africa, Japan, America, Hawaii, Brazil, wherever they came from. The next thing you know, we’re seen in every frickin magazine around the world.

Jeff started talking about the virtues of doing this Quiksilver thing. He goes, ‘what are you doing, you’ve finished school, let’s do some business.’ I go on. ‘Yeah, but I’m taking a year off and I’m gonna have a business experience.’

‘Then I’m gonna go back to graduate school and get my degree in business and major in cinema’,  because I wanted to go into film business. That’s what I wanted to do.

Jeff convinced me to do to this little Quiksilver thing. And by the way, everything I learned business school about doing a business plan, a cash flow statement, and the five P’s, all that stuff, I didn’t do any of that for Quiksilver.

This was going to be a situation we’re going to import shorts, we’re going to go up down the coast and sell them. Then I’m going to go to graduate school. And thank you very much, Jeff, have a nice life. Jeff’s gonna go back to whatever he’s gonna do. So that’s how we started. 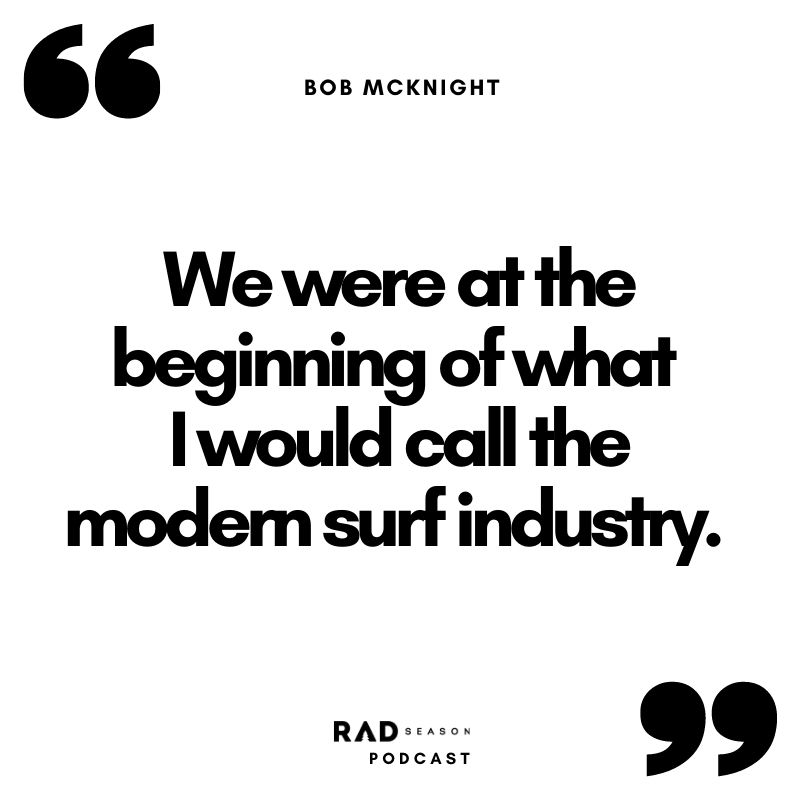 What really happened is that Alan Green could not supply any shorts to us. So we had to make them ourselves. He sort of tricked us into manufacturing right out of the gate. It’s a daunting thing to be in the apparel industry anyway, but when you have to self figure out how to make the shorts when there’s no industry, and especially nothing in Southern California in the Newport Beach area.

Jeff and I had to drive around LA to fabric that’s appropriate, find the snaps, find the velcro source, the label, figure out cutting, figured out sewing, all this stuff on a garment, and we did over the summer of 1976.

We walked into our first store, which was the Hobi Shop and then Dana Point, and the Val surf shop. We walked in on the the same day and we sold them our first pairs of board shorts, and they were sold out in three seconds.

We started living the old American dream in the back of my Volkswagen van going up and down the coast selling board shorts.

Meeting these great shop owners of the shops, we surfed everywhere, we hung out with these people, we had meals with them, we had the time of our lives. So we did that up and down the West Coast up and down the East Coast and all over Hawaii and really secured a lot of core retail shops and made boardshorts sort of famous there.

We were at the beginning of what I would call the modern surf industry.

I mean, there’s certainly an industry before us. All of a sudden there’s a shortboard era and that’s when we started and from there it launched. We were at Ground Zero when the industry started. Right behind us was Billabong and Gotcha, and Maui and Sons and all these other came.

I’m really proud that we were there at the very root of it.

Rad Season is providing you with rentals and hotels at the lowest prices available online. Book your stay near Huntington Beach, California using the map below!