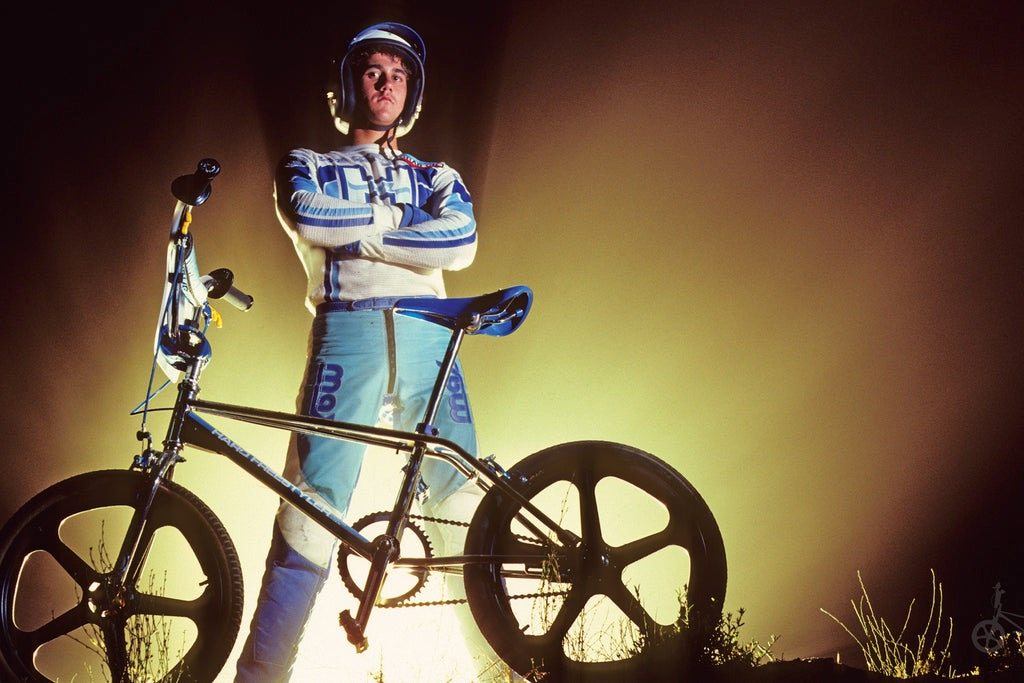 Bob Haro grew up in Southern California riding motocross, surfing and skateboarding. When he ran out of money to continue racing dirt bikes he turned to BMX. Drawing was Bob’s first passion and started illustrating for BMX magazines and brands. He became the staff artists for BMX Action Magazine. At 18 he started his own business, manufacturing BMX Plates and selling tens of thousands in the process. This gave him a taste of entrepreneurship and he reinvested the money back into the business and started making other things.

Bob was racing BMX and riding skateparks at night which became the birth of Freestyle. Parks were starting to close down so he was building his own ramps. They would take their ramps on the road doing Freestyle demo shows across the US and then worldwide.

Bob designed the first frame and fork for freestyle BMX. Then partnered with Torker to build the first freestyle bike called the Freestyler and Haro Bikes was launched. Haro Bikes grew rapidly turning over 7 million before Bob got an offer to sell it. He took the offer and started Harodesigns in 1993, a brand and marketing company for the action sports and motorsports industries. Bob went on to design the 2008 and 2012 US BMX  Team kit for the Olympics and continues to be an instrumental figure in the BMX world.

Tune in to the podcast to find out how Bob mixed his love of design with BMX, starting businesses, touring the world on his bike, the boom of Freestyle, BMX in the Olympics and loads more!

Oli Russell-Cowan: Bob great to have you on the show. What have you been up to recently?

Bob Haro: So, my day to day job post Haro Bikes is I have always been a designer. I have a design agency and I work with various clients, doing design, creating websites, packaging, branding. I’m pretty capable because I’ve done this for myself over the years with my brand Haro Bikes. But when I sold the company I kind of went back to my roots being a designer and a creative. That’s what I do day to day.

I have a couple different websites that I run. One is Bobharo.com That has BMX merchandise and memorabilia. I have my art there, images, posters, T shirts and all kinds of stuff.

I followed the Kiss rock and roll band model. Anything I can put my name on, but in a good way. I design everything and we make all kinds of fun stuff. It’s grown from a T shirt and a hat to doing a bunch of other stuff. It’s kind of fun but it’s modern. I’m vintage in the sense that I was riding BMX in the 70s in the 80s. But as a designer, I like to make things still contemporary and cool at the same time.

Oli Russell-Cowan: Did you start drawing before BMX?

As a little kid I was always drawing. I was inspired from my father who was an artist.  Unfortunately, he never did anything with his skill and his passion. He got busy being a dad and raising kids and needed to have a job and make money and take care of the family. So his artistic passion went to the wayside. He would draw at home and I would see him. He gave me some early inspiration.

Growing up as a kid, I’ve always drawn and always excelled in art classes. I was into art and music and all these kind of things. So very kind of creative things and BMX. 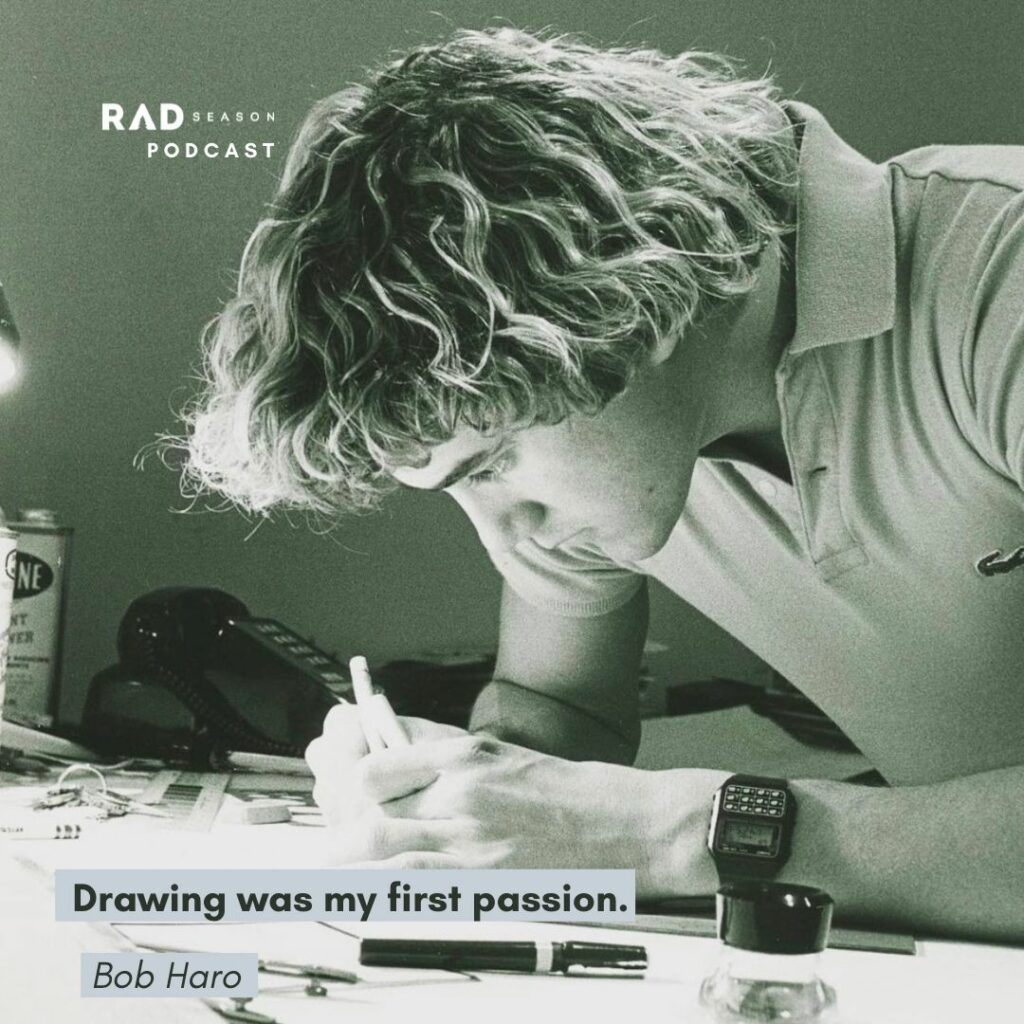 I was always riding bikes and skateboards, and whatnot. Growing up in Southern California, we have lots of sunshine. So it’s easy to be outside all the time. Through the 70s and the 80s skateboarding is happening, surfing is happening, BMX is happening, Moto is happening. You have all these things you can do and I was a curious kid and got into all of those and excelled at one in particular that was BMX. Then the combination of BMX in my artwork, that’s how the business was born.

Oli Russell-Cowan: When did the idea of doing BMX shows come about?

Bob Haro: I was working at BMX Action magazine. The numberplate business is starting. I’m doing illustrations for other magazines and brands. I’m riding BMX all the time.

Where I grew up in San Diego, right by my house was a skateboard park. So we used to skateboard there, skate there. And then at night, we would occasionally throw our bikes over the fence and ride our bikes in the park because they didn’t let us ride there. So that’s kind of the birth of freestyle.

Freestyle BMX became this offshoot of what we knew how to do on a skateboard carving and kick turns, and all these other kind of tricks.

At this moment in time for me I’m doing all of those different things all at the same time. I’m racing BMX, and then riding and doing freestyle. Working on my tricks, and building ramps, and all that kind of stuff. 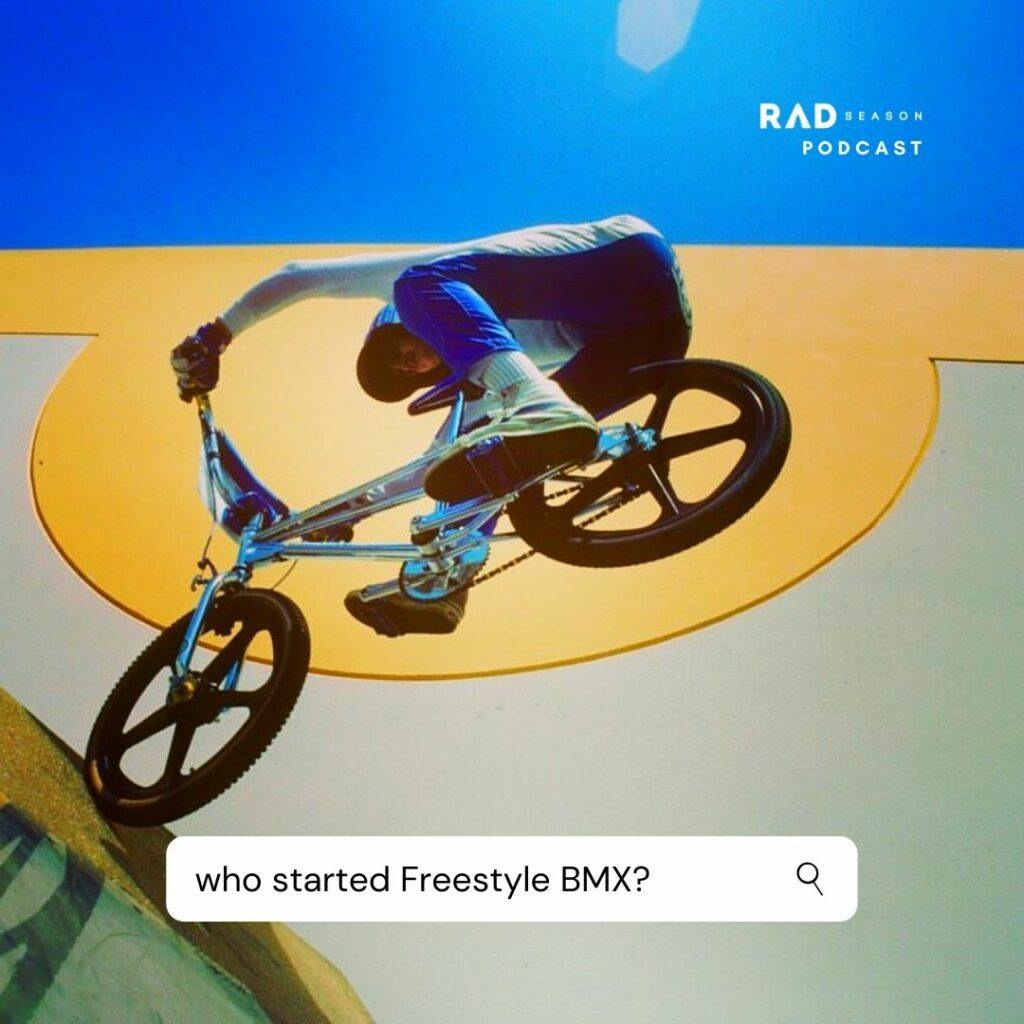 Us building ramps was a byproduct of a lot of skate parks starting to close down. United States is huge on litigation. Some kid cracks his head and hurts himself and lawyers try and close the skate park down. So we started making our own ramps so we had things to ride.

It was a tornado of things going on, and the timing of the sport and where I was in my life, everything was happening.

It was a really exciting time. I worked at a magazine where the owner of the magazine, his name was Bob Osborne, he really promoted young entrepreneurs. He really celebrated them in the publication. I was one of the guys that he celebrated and others. You’re young, you’re ambitious, you got a good idea, make it happen and turn it into something. It didn’t matter what you did just to do something.

Accommodation near Cardiff by the sea

Rad Season is providing you with rentals and hotels at the lowest prices available online. Book your stay near Cardiff by the sea using the map below!

One thought on “Bob Haro, The Story of Freestyle BMX”