8 Epic Island Adventures In The Philippines 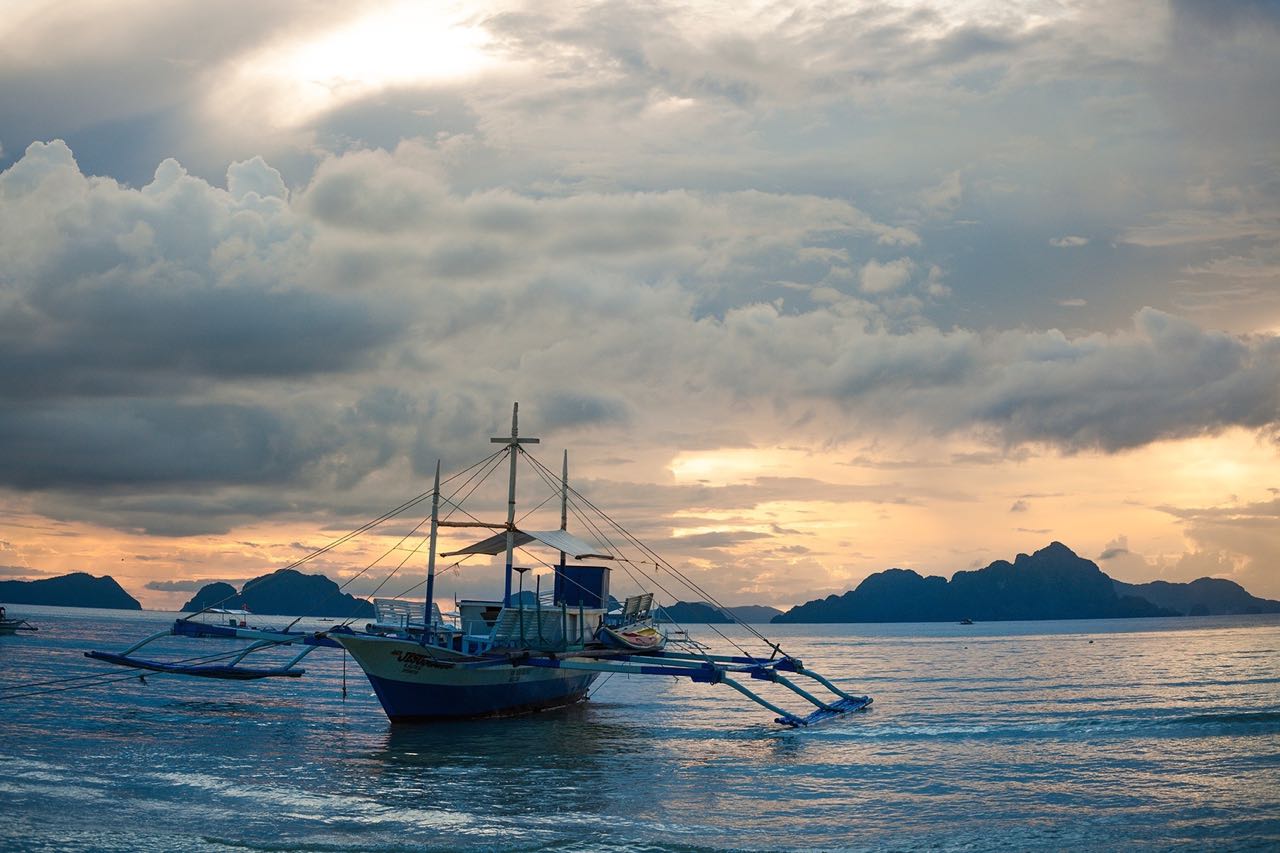 Adventures In The Philippines

With the salty ocean air blowing through your hair on a crystal clear day, you look down at the turquoise waters briefly before diving into another world below. In seconds, your world is transformed to dive amongst a plethora of vibrant, live coral, sea turtles, sharks and sunken war ships. Tomorrow, you’re hopping to another island to catch some killer waves and a week from now, you’re on one of the other 7000 islands to hike 2,954m to uncover breathtaking views of the land before getting a traditional tattoo by a 100 year old woman.

In this literal paradise, you have everything you need and then some. From swimming with sharks to kick-ass surf, island adventures hopping to secret beaches and trekking, snorkeling with a vortex of sardines to relaxing on the white sanded beaches – theres something for everyone.

With a million epic things to choose from, be sure to add these top island adventures to your bucket list while in the Philippines. 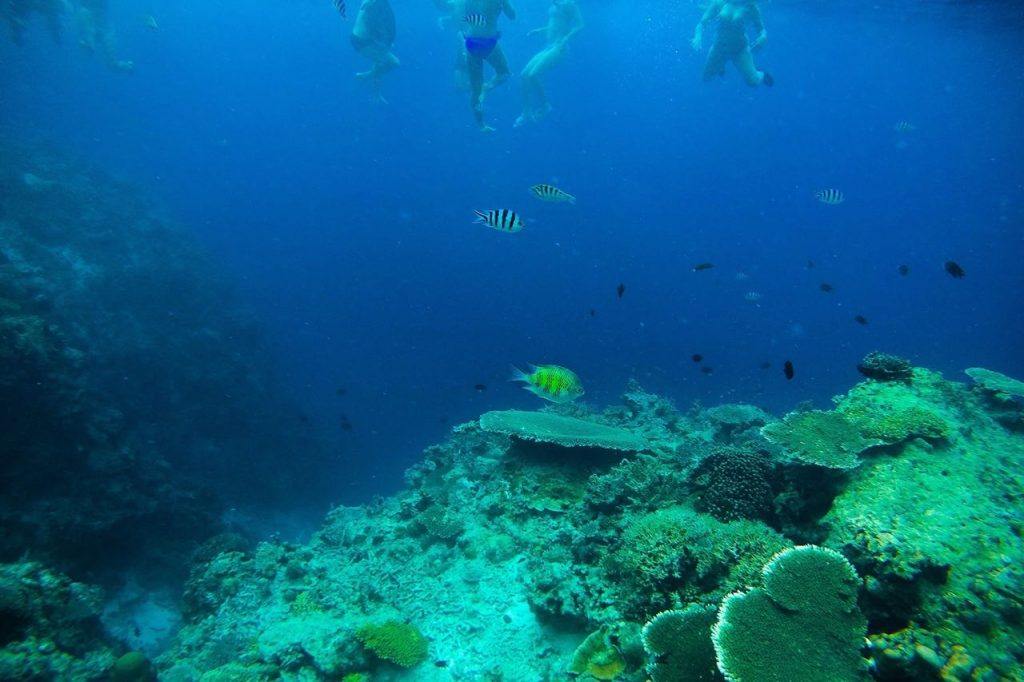 facebooktwitterpinterest Under the sea is the best place to be in all of the Philippines. Photo credit: Shannon Wolf

One of the most incredible snorkeling experiences is hands down in Moalboal, Cebu. This costal village is a mere 3hrs from Cebu city and is famous for its sardine run off of Panagsama beach.

Out the back of Cebu Dive Centre, walk a few meters and behold a giant reef drop-off displaying a vortex of thousands of glimmering sardines below. 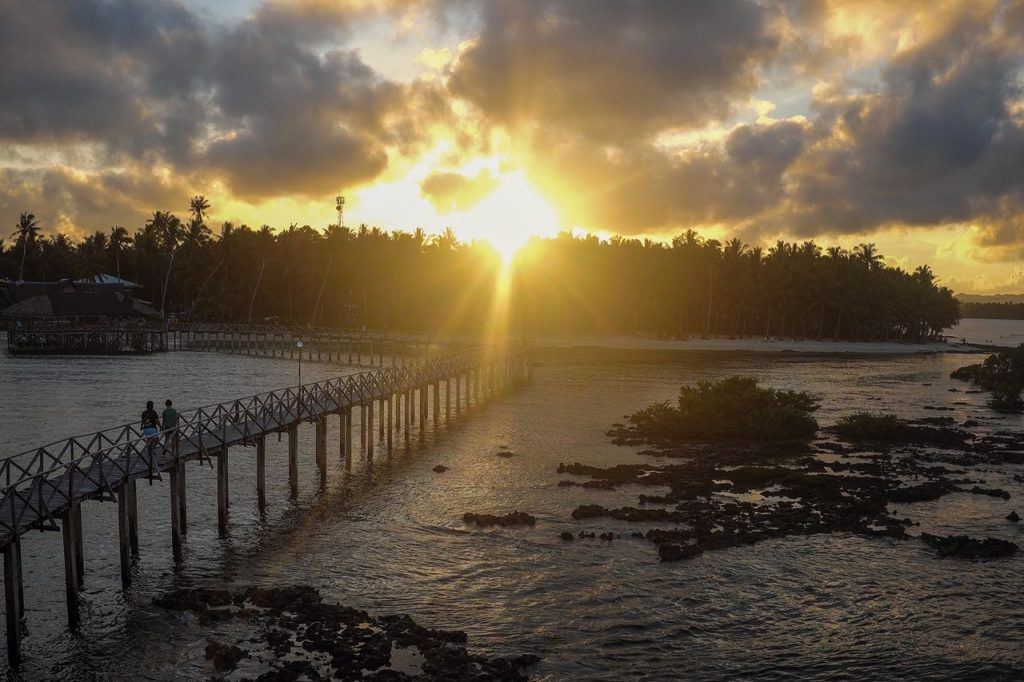 facebooktwitterpinterest From sunsets to the top surf, Cloud 9 is the top spot in Siargao. Photo credit: Shannon Wolf

If you’re looking for a hidden gem unknown to most travellers; head straight to the island of Siargao to an area called General Luna and get ready to fall in love.

Not only does this island host a chilled out vibe by day and sleepless dance parties under a star filled sky by night; If you’re an advanced surfer and stoked on heavy breaks and barrels, Cloud 9 is the top spot for surfing in all of the Philippines.

But fear not – If you’re a beginner and looking for something a little less heavy, a quick scooter drive to Secret Beach is the perfect spot to catch beginner waves.

No matter your level, you’ll be sure to find over 15 different surf breaks to chose from throughout the island and a piece of your heart will remain on this special island.

In 1944 during WWII, warships went down during an air attack along Coron Bay and to this day, you have the opportunity to re-visit a piece of history that will blow you away.

There are 5 shipwrecks to add to your diving list which include Akitsushima down 32m, the 160m long Okikawa Maru ship, Irako Maru for technical divers who have the chance to swim through the wreck, Morazan for open water divers at 25m and Sangat wreck running in at 160m long in 27m of water. For more information head to Neptune Dive Center.

4. Get A Traditional Kalinga Tattoo 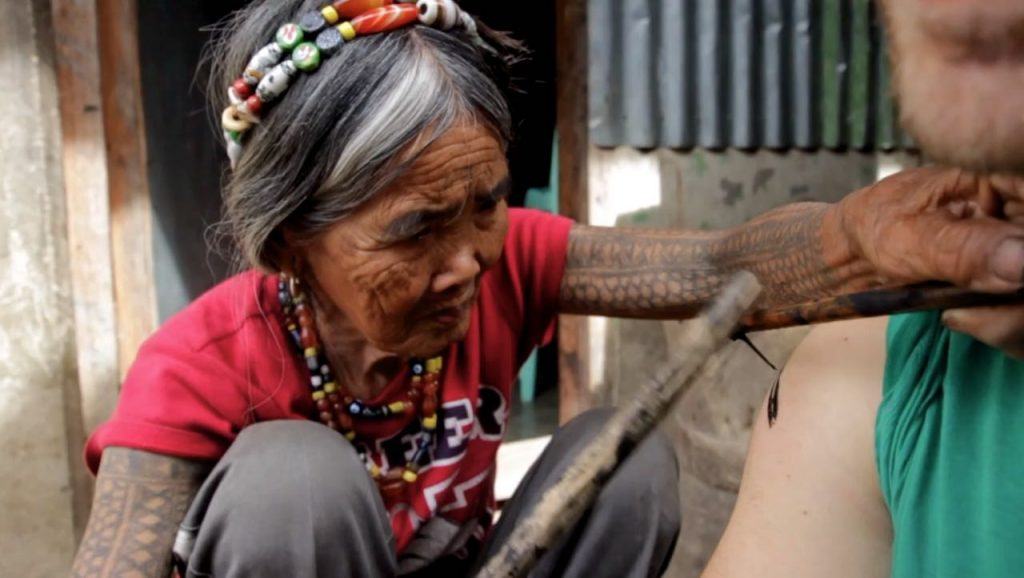 Make your way to the village of Buscalan in the Kalinga Province to get a traditional tattoo by one of the oldest and most renowned artists in the Philippines. Ms. Whang Od is said to be 100 years old and a legend in the tattoo world.

You have the option to have her select the design and placement of the tattoo which is customary in the Kalinga culture, or you can choose a design yourself from her display board. 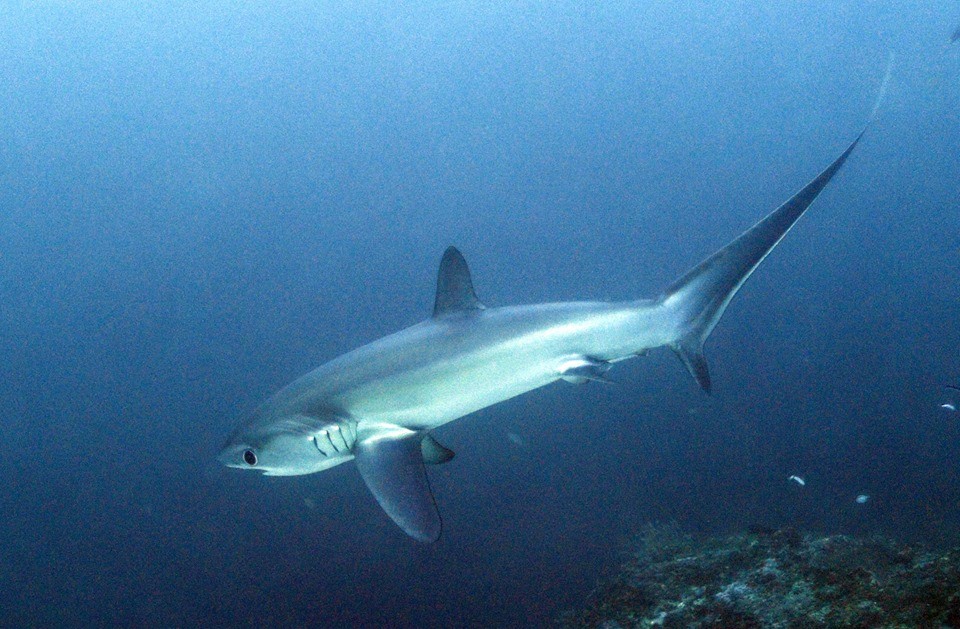 On Malapascua Island, get a chance to dive with sharks that aren’t overrun by the hand of tourism like the whale sharks in Oslob, Cebu.

The best time to see the Thresher sharks is between 6:30 and 8:30AM so grab a coffee, put on your diving gear and get ready for an experience of a lifetime. For more information head to Thresher Shark Divers 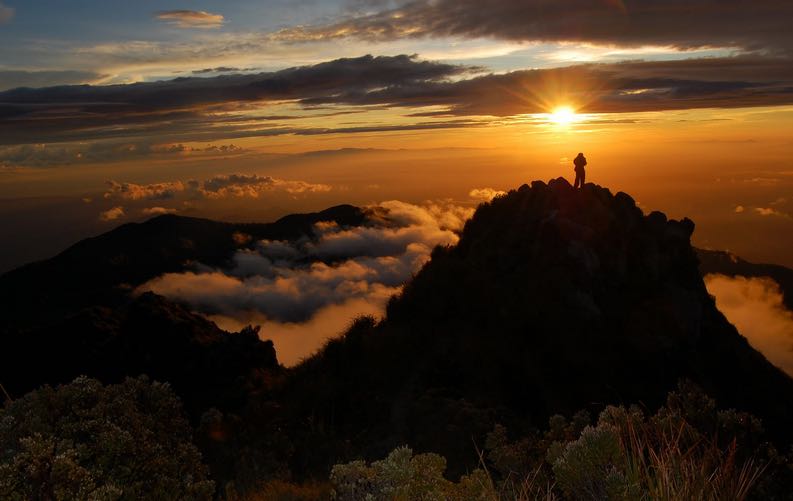 Mount Apo on the island of Davao is the countries highest peak and a UNESCO world heritage site promising panoramic views at a height of 2,954m.

Start your journey from Kidapawan city where your entry point will start at Barangay Ilomavis. This 4 day trek will take you through an array of landscapes sure to amaze with crisp, clean air as you trek through breathtaking forests and volcanic viewpoints, through rivers, moss filled swamps and a chance to swim in the highest lake in the country known as lake Venado before reaching the summit. 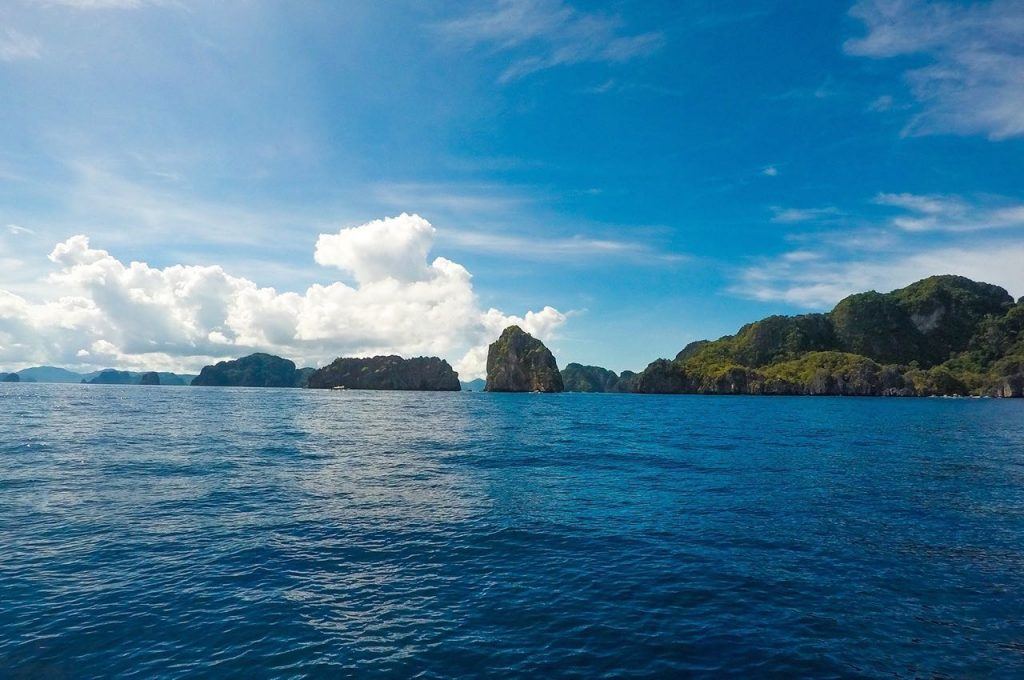 facebooktwitterpinterest Tour A and C on El Nidos Island Hopping adventure will remain in your heart for a lifetime. Photo credit: Shannon Wolf

El Nido, Palawan is famous for it’s island-hopping adventures and it’s no surprise why. Palawan has been ranked as one of the most beautiful islands in the world and with various tours available, you can enjoy it all and then some!

From snorkeling to squeezing through small caves to uncover hidden beaches, jumping off of the catamaran into the emerald waters below and kayaking past limestone cliffs and colorful fish – the island hopping adventures here will remain in your thoughts for years to come as well as the provided seafood buffet which is plentiful and one of the best meals you’ll have while in the Philippines!

In El Nido you have the option to chose between Tour A, B, C or D. Do yourself a favor and opt for the best: Tour A & C.

Tour A is a full 6 hour day of exploring various islands and 2 lagoons – small lagoon where you can swim or kayak through turquoise waters discovering every nook and cranny of the vast rock formations and jellyfish below; big lagoon where you are engulfed by limestone cliffs as you leisurely kayak through the magical space followed by a boat ride over to a tiny island where you will jump off the catamaran; splashing into the crystal clear waters in order to swim and crawl through a small cave to uncover a secret beach.

Your next stop is a white-sanded beach on Shimizu Island where you will have time to rest and relax as you are cooked up a seafood buffet fit for a king. Indulge your taste buds with freshly made crabs, shrimp, muscles, mackerel, eggplant, salad, chicken, pork, rice and fresh fruits while you soak up the sun before heading off to your final destination.

Seven Commandos Beach will leave you speechless with vibrantly blued waters, hammocks swaying along rows of palm trees and cabanas with a stretch of the whitest sand looking nearly unreal. It’s a paradise come to life and the perfect way to end Tour A.

Tour C is famous for it’s hidden beaches which once inspired the novel “The Beach” which was turned into an iconic film soon after. Your first stop is Helicopter Island where white sand stretches all around as you dive into the deep blue sea to swim as you marvel at the surrounding landscape. The second destination is Tapiutan Island where you’ll canon-ball off of the boat to discover the underwater world full of colourful coral and sea-life full of vibrantly colored fish and starfish.

The crème de la crème is right after you’ve had enough of floating amid sea creatures to a hidden paradise known as secret beach which was what inspired the iconic book and film “The Beach.” Your heart will pump as you fight amongst the strong current to swim through a small gap that rewards you with one of the most striking hidden gems in Palawan known as Secret Beach.

For lunch, you will stop off at Star beach for some R&R before having a freshly grilled tuna, meats, mussels, rice, salad and fruits while you lay in the warm, white sand drinking freshly chilled coconuts.

Your final stop of the day is spent snorkeling at Kalmung Point, viewing Matinloc Shrine and enjoying the surrounding scenery of limestone cliffs and deep blue waters as you’re brought back to El Nido town in the evening.

On the 3rd weekend of January, make sure you experience Cebu City’s biggest and most attended festival in the Philippines known as Sinulog.

Be prepared to dance wildly with drinks pouring around you in every direction along the busy streets with millions of locals and travellers alike! Be wowed by colorful costumes, a wild display of fireworks, dancing performances, art exhibits and more!

Born in Toronto, Canada, Shannon Wolf has lived and worked around the globe as a freelance writer and photographer. Over the years her work has been featured and published both in print and online in various publications. Shannon has travelled over 40+ countries on 4 continents in the last 3 years and is an avid food lover and adventurer with an open itinerary and no intent of stopping.