Kevin has been involved in the music business for over 40 years. He started in the clubs of Los Angeles and graduated to stage manager of the first ever Lollapalooza in 1991. Then in 1995 with the convergence of action sports and music he thought it was time to try something himself and that’s when he created the Warped Tour.

Nowadays, Kevin’s a professor at the University of Southern California where he teaches about the music industry, marketing, design and production. He is also the founder of the Kevin Lyman Group a live event production company and brand strategy firm. Kevin has recently launched the My Warped Life Podcast going back through the history of the 25 years of the Warped Tour telling the unheard of stories from the artists, athletes, crew and fans about what really happened backstage and on the road.

Tune in to find out how Kevin got into promoting events, how he started the Warped Tour, his philanthropic work and his favourite memories and epic stories from over the years.

Oli Russell-Cowan: In the early 90s when you were doing the stage management you were involved with the first ever Lollapalooza.

Kevin Lyman: Yeah, the scene was kind of changing. The punk scene was still around, but it started turning into that alternative scene. Los Angeles was very big with that, the Red Hot Chili Peppers, Jane’s Addiction, bands like that. We started to work a lot of those bands.

I remember this period, and this is the moment in time when Goldenvoice the original founders were having some legal issues. We had to make this company survive because we had six shows with the Ramones going and we had seven nights of Jane’s Addiction at the Palladium.

We were actually turning into a legitimate company, but it was all ready to implode. We pulled that off, they formed Goldenvoice I decided not to become a partner at Goldenvoice. Jane’s Addiction’s Perry Farrell and Ted Garner their manager at the time, recognize the work ethic I had and my relationship with the artists within that scene of music. So when they started Lollapalooza, they didn’t go to the traditional stage manager that they would normally have on a big rock tour.

They went to someone they knew from the club world. They offered me that job to come on that first tour in 1991 and it was pretty exciting. Siouxsie and the Banshees, Nine Inch Nails, Jane’s Addiction and Ice T. Which, I became very close to and will be a guest on my podcast coming up. We’re gonna do a whole episode on Ice T.

It was just a really interesting time for me and getting the chance to tour and be a part of that energy started getting me thinking about maybe something I might do in the future. I wasn’t ready yet. And I always tell people is to be patient in life and build up those relationships before you go do your own thing. 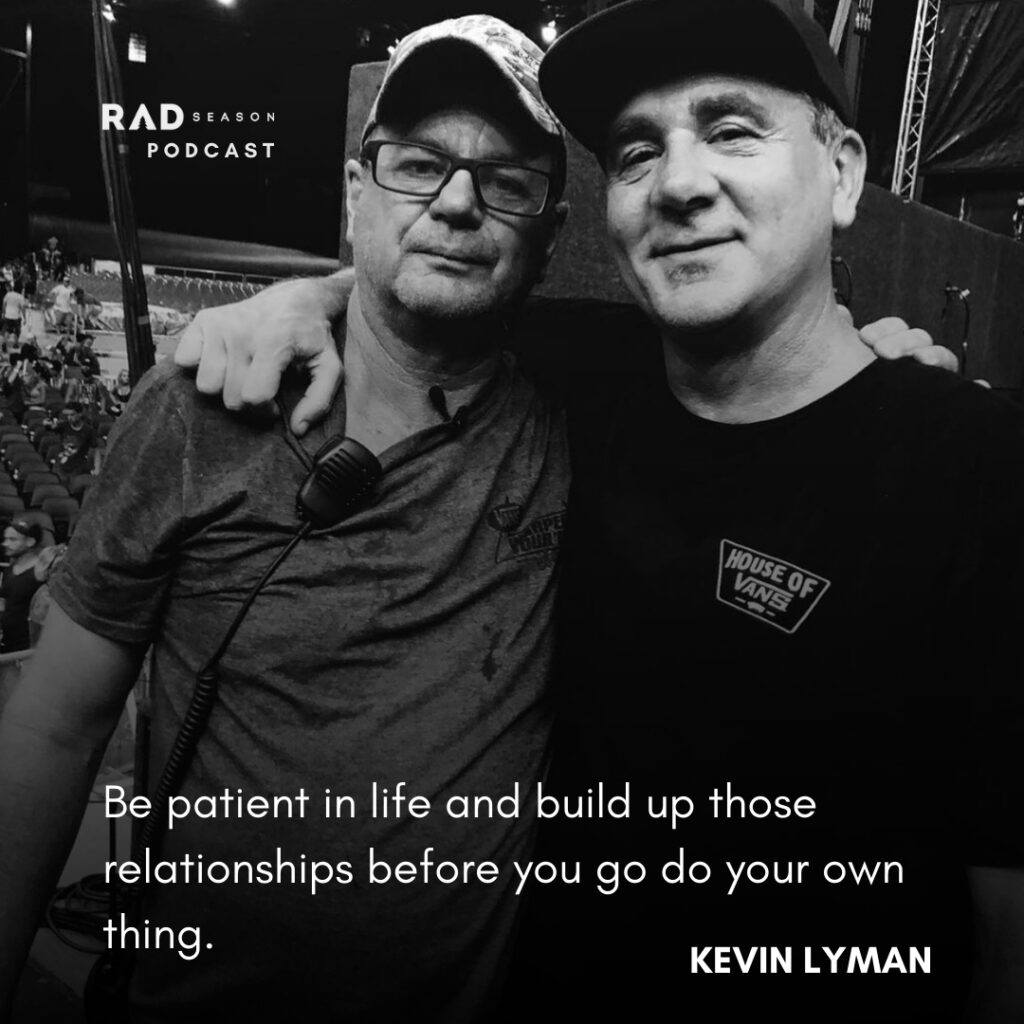 Post Lollapalooza I started being part of the Nine Inch Nail World Touring team. I was doing Stone Temple Pilots and working with Porno for Pyros all at the same time. I was tour coordinator for all of them. I started to see that my life would be on the road all the time. And I didn’t necessarily want that life. It’s for certain people. But I was kind of looking at, well, maybe I wanted to have a life at home too. A life that maybe I get a chance to go on the road, but I wouldn’t be at the total whim of an artist to get there.

Oli: Then what changed when you decided you wanted to potentially do your own tour?

Kevin Lyman: In 94 I was still doing some stuff with Lollapalooza. I was doing site coordination. We put on this big show called The Mistake at the Lake. I found this location on a giant site, but there was only one lane in and one lane out, kind of my specialty at that point of causing giant traffic jams.

We were starting to do a lot of events that were combining action sports and music. And some of those events involve charity, which I’ve always had a lot to do with. We were doing a lot with Goldenvoice, shows like Rock the Vote shows. Up in the mountains we were doing Board Aid with Transworld publications, where they would have snowboarding and they would have a vert ramp, and music.

I was doing the Swatch Impact Tour, which combined skateboarding, a kind of a touring skateboarding show. The Vision Skate Escape, which you can still find some pretty cool videos online, they had a huge budget, and we got to build the double ramps.

‘I ran into the Chili Peppers. And I said, Hey, can you come down and play on the top of the ramp it would be really cool and about five days before we confirmed them for $250.’

Now I think a ticket might cost you that much. But it was a really cool time in Southern California. Goldenvoice were doing some events. We were sitting in the snow after doing one of these big events. And that afternoon, I had heard some people talking about the X Games in 1995, that the X Games were coming. That they had just done this deal. And I was sitting there with a friend and we were saying, Wow, if the X Games comes this whole lifestyle that we’ve led in California is going to get much more known across the world. Maybe it was time to create our own event versus working for someone else.

I figured someone would want to kind of do something like this. So by that point, 12 and a half, 13 years into the business. I said, You know what? Why can’t it be us? 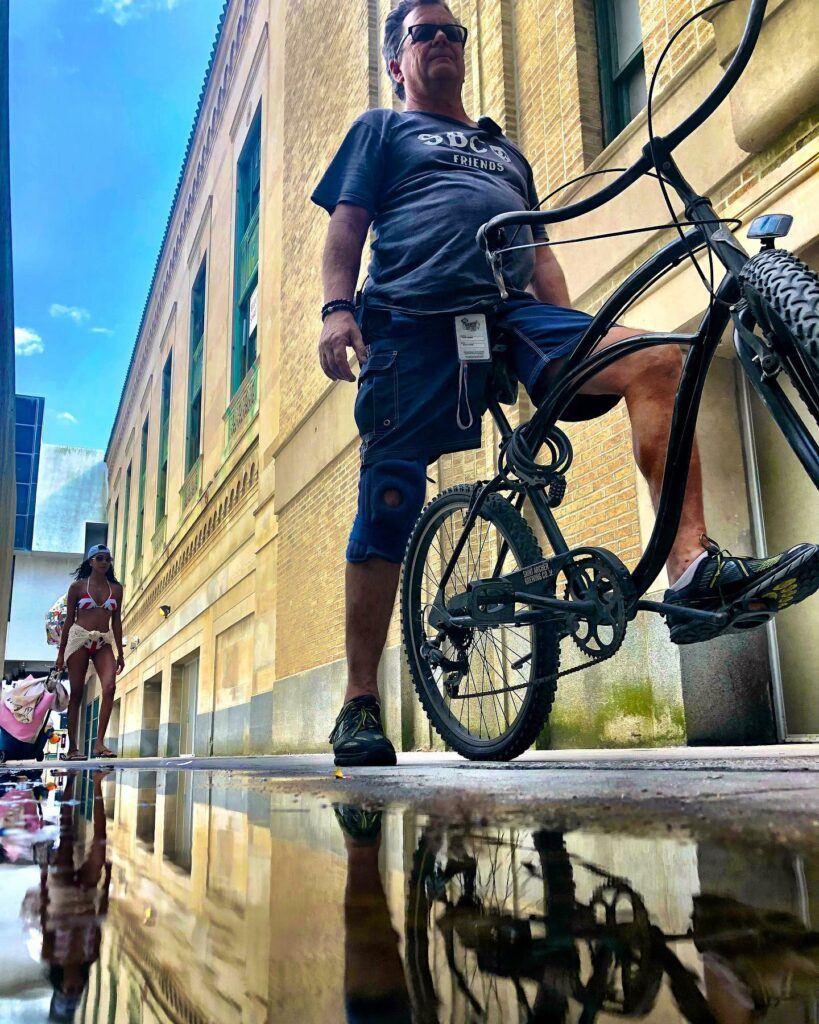 Oli: When did you think we’re going to try and marry up the action sports world with music, was that something that clicked straight away?

Kevin Lyman: It moved very quick actually. This was in March. We put the first tour together and we’re out about August 1. So within a few months, we were out doing this. I’d like to say it was a huge smashing success. But most likely it was viewed as a financial failure by all involved. Except maybe the skaters that was the first time they ever got a paycheck every week. I think they were getting $600 a week and per diem. So they were actually getting a consistent paycheck at that point.

They played some dates and Quicksand. And we actually pulled off 25 shows. I think really what happened with that and it was all that experience that I had allowed me to fail. People said, Wow, he’s onto a good idea. But we’ll give them a second chance. I don’t know if I had not done 13 years of good work and built those solid relationships that people would give someone a second chance.

That’s why I always tell people, if you fail, many times people are like, Oh, they expect you to fail. But I failed. But they go, he’s onto something here. We don’t know quite what it is. We’ll give him one more chance.

That’s when a couple bands that were kind of well known in the punk scene, Pennywise, and NOFX they heard and got involved. They didn’t hear it was a great tour. But they heard it was a lawless tour, basically. And we were breaking every rule of the touring business. And it was a bunch of Renegade pirates going down the road. I think maybe that’s why they got involved more than wanting to support me at that point.

They just heard it was something they could go out and be kind of a punk rock tour. They got involved that second year. I think that’s when we really started to get known. We did a little video too called punk rock summer camp. I look back now and people didn’t realize that we were already becoming an eclectic Music Festival, bringing a lot of different sounds with us. Some people thought it was a punk rock tour.

Kevin Lyman: Going back to that first year, the name of the tour was going to be ‘The Bomb. Not the best time to announce it was the Oklahoma City bombing here. The relationship I had with Transworld publications, they had a magazine called Warped magazine, you can still get a copy of it in Japan, that magazine still exists in Japan.

I called Fran Richards and said, ‘can I borrow the name of your magazine? I won’t put out a magazine if you don’t put out a tour, we’ll have a partnership and marketing will work with each other’. And that’s where Warped came from. And in the second year that’s when I was fortuitous enough to have a quick meeting with Vans, the shoe company. I think they were trying to get me to come and help them with their amateur skate program. And I convinced them in a very short 10-15 minutes that unless you’re part of my successful in quotation marks, ‘Music Festival’, no one will come watch amateur skating. And we forge that relationship that went on for the next 24 years. And it became the Vans Warped Tour.

You can follow Kevin on instagram page KevinLyman and his company Kevin Lyman Group. Be sure to check out all the epic stories from 40 years in the music business on his podcast My Warped Life.

Rad Season is providing you with rentals and hotels at the lowest prices available online. Book your stay near Altadena, California using the map below!